↓
Europe » Spain » Fab Dalí Museum in Figueres in Medieval Catalan Spain
SPAIN  Medieval Catalan Spain features a whole range of charming villages of rustic stone houses where it seems that time has stood still for centuries. It is in these surroundings that the Catalan artist Salvador Dalí chose to live and perform his great imaginative works. Today his fascinating surrealist universes can be visited in his former homes in Portlligat and Púbol as well as in the Dalí Theatre-Museum in Figueres.
Ainnelise Niyvold Liundbye
UPDATED: 13 MAY 2021
This page has affiliate links (if you purchase through our links, we get a small commission at no extra cost to you - thank you!), see our Privacy Policy & Disclaimers.

We are in Catalonia, a part of Spain that since medieval times has undergone dramatic history, for instance during the Franco regime and the years subsequent to this. It has for the Catalans been a continuous fight for independence – which still goes on. A recent attempt to achieve independence was the Catalan independence referendum of 1st October 2017 which eventually was declared illegal and resulted in acts of violence from the Spanish government.

Where to stay in Barcelona? Hostalin Barcelona Gran Via (budget) near Passeig de Gràcia, Ciutat de Barcelona (mid-range) near the Picasso Museum, Catalonia Port (top) with a pool in the Gothic quarter.

Despite harsh times, the Catalan people have not only strived for political independence – but along the way they have also succeeded in developing their own Catalan cultural lines in Spain. Catalonia has during the last centuries manifested itself as a region of flourishing art performed by phenomenal artists.

These count among others the fascinating artist Salvador Dalí (1904-1989) who was born in the Catalan town Figueres in Spain. He can be described as one of the most extravagantly bizarre artists both in Catalan Spain and in the world. His real name was Salvador Domingo Felipe Jacinto Dalí i Domènech, 1st Marquis of Dalí de Púbol. As a surrealist painter, sculptor, photographer and film & theatre producer he created the most remarkable and unusual masterpieces. 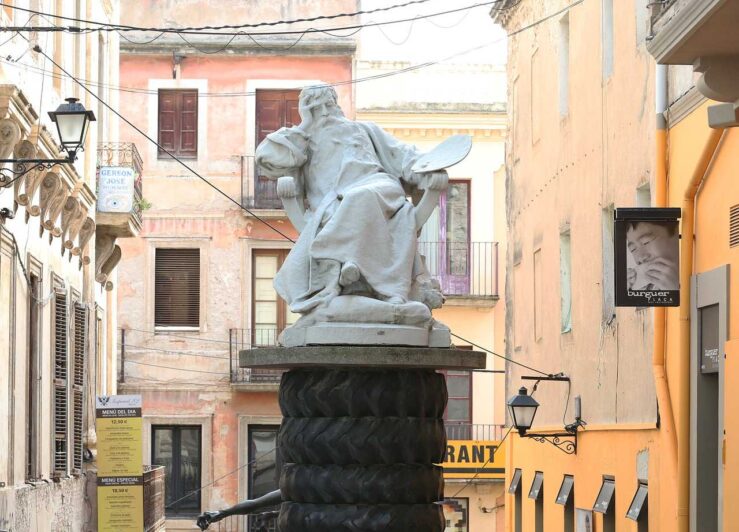 Dalí was unquestionably one of the most eccentric artists at his time and his works reflect the imaginary world of surreal situations, significantly influenced by the Paris Surrealists. He depicted in his paintings the most impossible phenomena like the well-known melted watches in an empty landscape.

It was Costa Brava’s landscape of wild, rocky coastline, hidden coves, pine groves, small fishing communities, medieval settings and the ever-changing sea that inspired him. He painted many of his great works at his home in the small picture-postcard fishing village Portlligat near Cadaqués where his house, the Salvador Dalí House, today can be visited.

Dalí was also captivated by the ancient hamlet Púbol and designed a surreal home in an old medieval castle. It is known as the Gala Dalí Castle which today can be visited as a museum. Salvador Dalí devoted the place to his wife Gala using his creative talent to make it a unique fanciful universe and sanctuary for her. 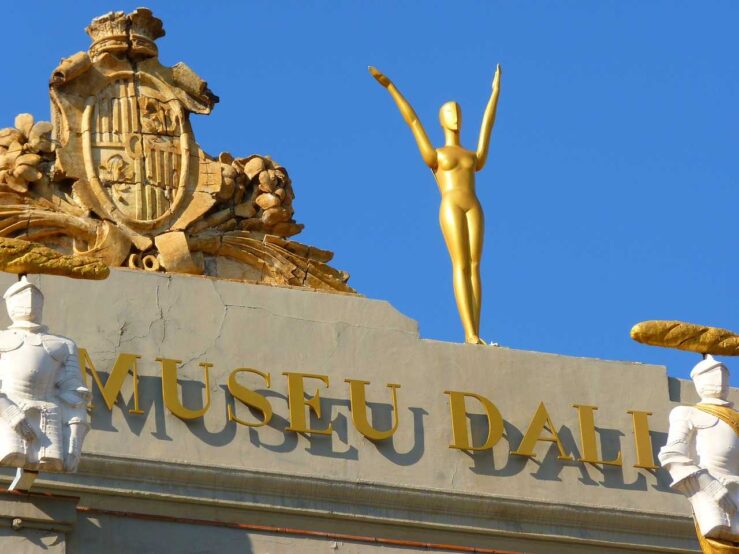 3. The Dalí Theatre-Museum in Figueres, Spain

The Dalí Theatre-Museum is a main draw in Figueres. The town is both Dalí’s birthplace and the place where he was buried.

Dalí’s famous eggs on the museum building in Figueres.

The museum in Figueres is the place in Spain where most people get to experience his striking masterpieces and imaginative mind. Dalí designed the Dalí Theatre-Museum as the most comprehensive surrealist project in the world. The museum construction is topped with yellowish eggs balancing on the roof and decorated with typical, Catalan pieces of bread on the walls. These naturally evoke every visitor’s curiosity and can be seen as the appetiser of what awaits inside!

The Dalí Theatre-Museum in Figueres dotted with breads.

One of the ingenious installations here is the Mae West Room with the odd photographic perspective of a large wig. Visitors are invited to climb a few steps for a view down through a kind of photographic apparatus with a reduction lens. In this way every visitor can reproduce the composition of the image of the red sofa now appearing as lips of Mae West’s face framed by the golden wig.

The exhibition has everything: subconscious universes, ingenious illusions, photo series of Dalí’s own decorative moustaches, holograms, sculptures and motives of distorted proportions. A special section displays his fantastic and meticulously designed jewels. All add up to one of the most significant and impressive surrealist productions ever. 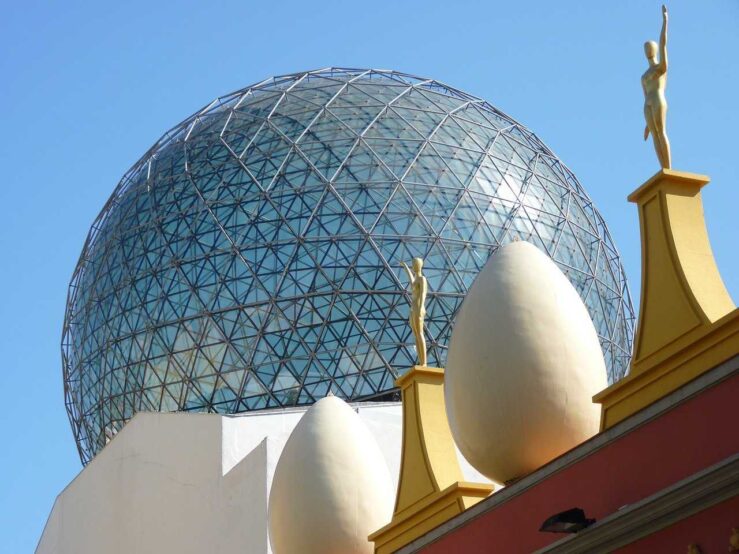 The Dalí collection in Figueres and his two other other museum houses in Púbol and Portlligat exude eccentric and multifaceted surrealist art as in few other places in the world. When you combine it with the awesome medieval charm of the surrounding Catalan hamlets and villages, the rich Catalan culture and history, the picturesque coastal villages and the gorgeous rocky coastline scenery, the north-eastern corner of Spain is the perfect long weekend getaway or cultural day trip from Barcelona.

Are you going to Barcelona? Then take a look at this: Must-see Museums, Sights & Things to Do in Barcelona in 5 Days

Have you checked if you will need a visa for your trip? Click here to check and apply for a visa.

Trending on the website now: Explore Magnetic Island in One Day and The Little Mermaid Statue & Story
-
Disclosure: This page may contain affiliate links. This means that if you click on our links, we may earn a small commission at no extra cost to you, read more in our Privacy Policy and Disclaimers. As an Amazon Associate we earn from qualifying purchases. Thanks for supporting our website!
↑

Privacy and cookie notice
We use cookies for technical, performance and advertising purposes, for site traffic analysis, to remember your preferences, as well as to provide you with the best service and experience.
By clicking ‘Accept’, you consent to the storing of all cookie categories on your device, as further detailed in our Privacy Policy, which also specifies how we collect, use and store personal and other data. Choose 'Settings' to manage your cookie settings. If you click ‘Reject’, only necessary cookies will be stored, but the website may not work as intended. You can change your preferences anytime in the Cookies link at the page bottom.