↓
Europe » United Kingdom » 12 Hours in London: Ready, Set, Go for the Temple Church!
UNITED KINGDOM  What can you do if you have a whole day equivalent to 12 hours to explore the city of London – maybe between two connecting flights in and out of a London airport? The options are numerous. With thorough planning it is possible to include both museum visits, shopping, a musical and hidden gems like the old Temple Church full of Knights Templar history.
Ainnelise Niyvold Liundbye
This page has affiliate links (if you purchase through our links, we get a small commission at no extra cost to you - thank you!), see our Privacy Policy & Disclaimer.
Table of Contents[ - ]

Where to stay in London

Setting out in the morning from Stansted Airport we have a whole day – corresponding to 12 hours of cultural experiences in the city of London ahead of us. The Stansted Express takes us fast and conveniently to Liverpool Street Station where we continue by tube to Oxford Street – for some tempting shopping.

Inspiration for your London trip: London in 3 Days and Which Cambridge Museum to Meet Charles Darwin?

A couple of hours later, we impulsively jump on a double-decker bus which is an excellent way to do a bit of city sightseeing. Piccadilly Circus, Covent Garden, St Paul’s Cathedral, Oxford Circus, Oxford Street, Bond Street, Marble Arch, Hyde Park – we end up covering a lot of the major sights from the top deck. This is the fast way to do some iconic London sightseeing in a short time. 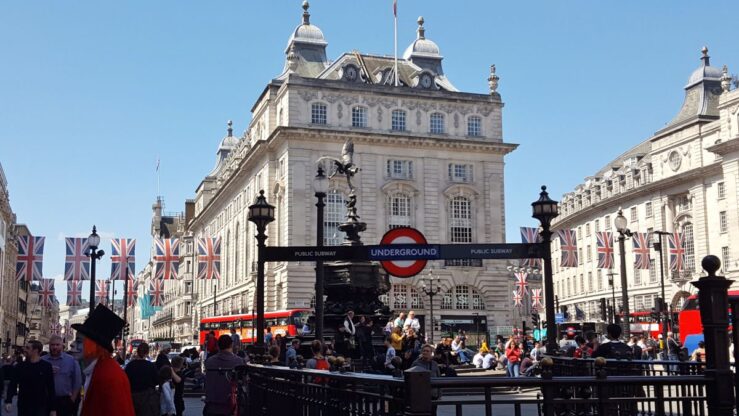 Afterwards, in a tiny park near the British Museum we improvise a picnic with sandwiches from the nearest Sainsbury’s. It is a lovely day and the small area is full of tourists, students and others who enjoy the surprising tranquility in the midst of the otherwise busy metropolis.

A young man recites from his notes while walking back and forth on the lawn between sunbathing and chatting groups of students, completely unaffected by the surroundings. It is a real gem of a city oasis! 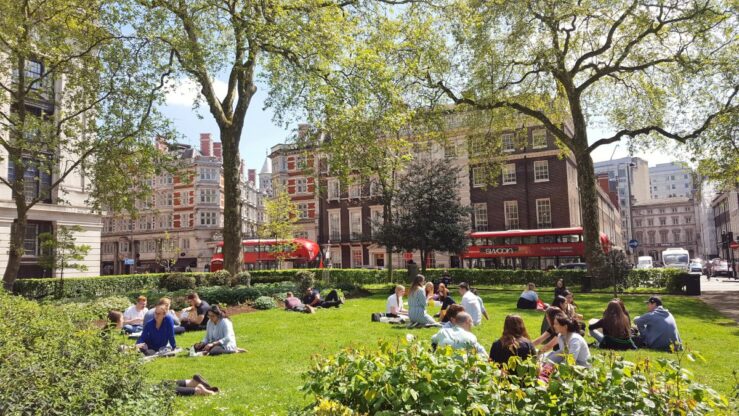 Picnic on a green spot in central London | Photo: Travel In Culture

The British Museum is next. Surrounded by ruins of magnificent palaces, animal friezes, delicate mummies and ‘The Lewis Chessmen’ with the medieval chess pieces of walrus tusk originating from Norway and found on the Outer Hebrides, we immerse ourselves in intriguing antique cultures at the museum.

The Rosetta Stone fascinates us with its significance for deciphering Egyptian hieroglyphs. It originates from Memphis in Egypt and dates back to 196 BC and was discovered by a soldier in the Nile Delta in 1799 during the Napoleon campaign in Egypt. Since it has three versions of a decree inscribed, namely versions using both hieroglyphic and demotic scripts as well as ancient Greek, the two others could be used as the key to understand the hieroglyphs. 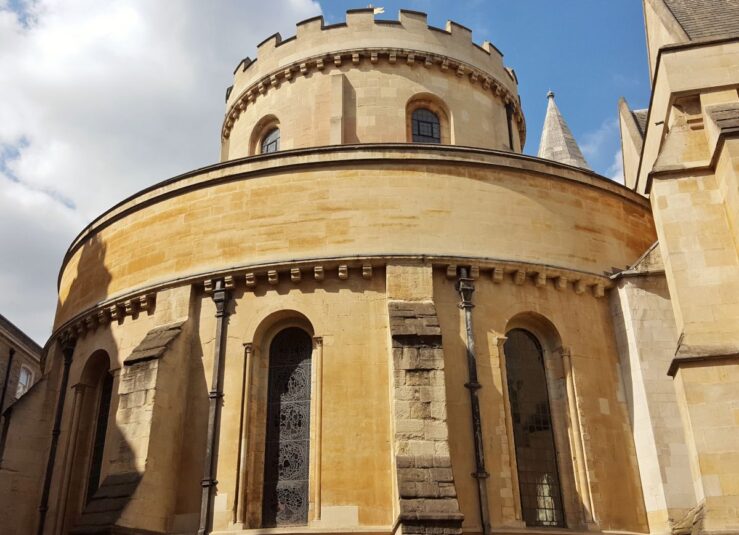 The old Round Church can be found in a secluded courtyard | Photo: Travel In Culture

The hidden gem near Fleet Street is the old Temple Church which is rich in Knights Templar history. From the Temple Underground Station, twisting through the intricate net of streets and paths, we pass the Middle Temple, the Lamb Building, the Cloisters, the Honourable Society of the Inner Temple and the Hare Court Chambers, before we finally reach the very Temple Church, tucked away in a secluded courtyard. The finest temple gardens flank the paths towards the church. 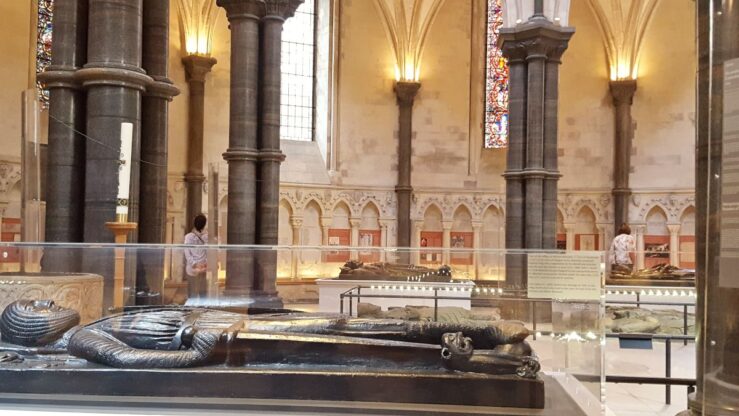 Templars rest inside the Temple Church | Photo: Travel In Culture

The Temple Church consists of an original round church and a later chancel. It was built here in London by the Knights Templar which was an order of monks who protected pilgrims on their way to and from Jerusalem. The crusading monks built churches and monasteries on their way all across Europe.

At the entrance an adorable, elderly lady receives us and shows us in, and we enter the historic church which has been the focal point of the Templars for centuries.

Numerous knights of the Crusades are buried inside the church with stone statues above the tombs in the church floor. The Temple Church was King John’s headquarter in 1214-1215, where the knights protected him. 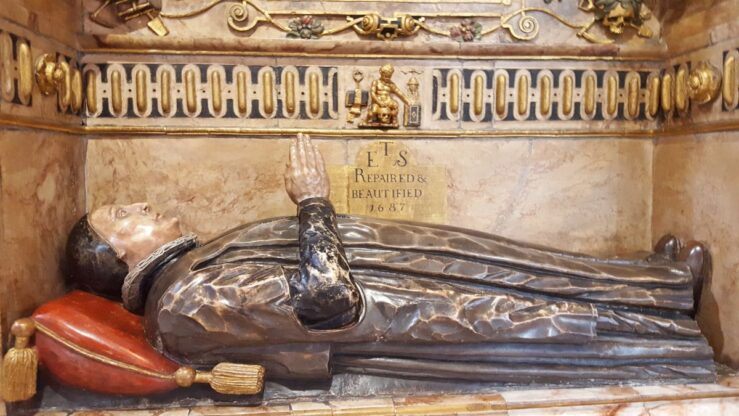 The church was built by the Knights Templar which was an order of crusading monks | Photo: Travel In Culture

There is a special Magna Carta exhibition in the Round Church. It is a charter of rights from 1215 agreed to by King John of England. He renounced part of his rights, which was the first step towards England’s state law. 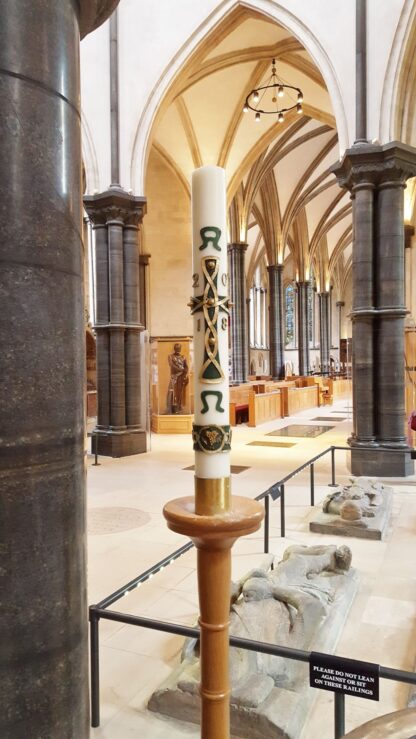 The Temple Church is an 800-year-old church in London | Photo: Travel In Culture

William Marshall was the driving force behind Magna Carta, and he has got an honorable place inside the church.

Late afternoon we enter Nicholson’s The Wellington on the Strand, and with delicious fish & chips we are now ready for quite a different, modern cultural experience. The Lyceum Theatre is just round the corner, and the musical The Lion King is on tonight! 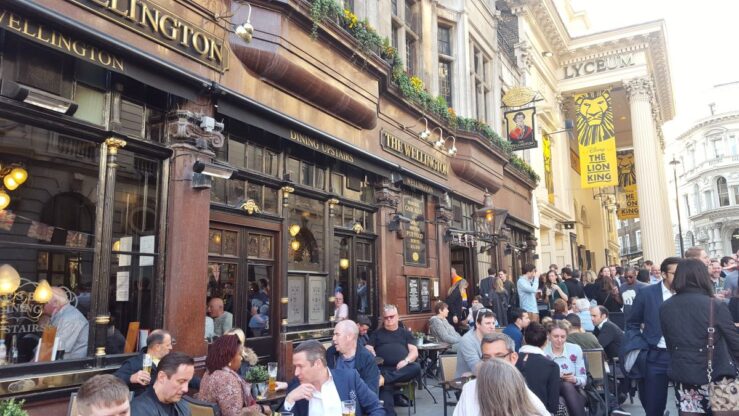 It is time for a glass of beer outside The Wellington | Photo: Travel In Culture

People gather on the street in front of the pub with a glass of beer or wine in their hands. It is a lovely, mild May evening.

With high expectations for the musical we find our seats on the balcony. It is all amazing! An outstanding and original choreography of dancing animal characters absolutely impresses us. It is very imaginative and full of surprising effects – unquestionably a top performance! 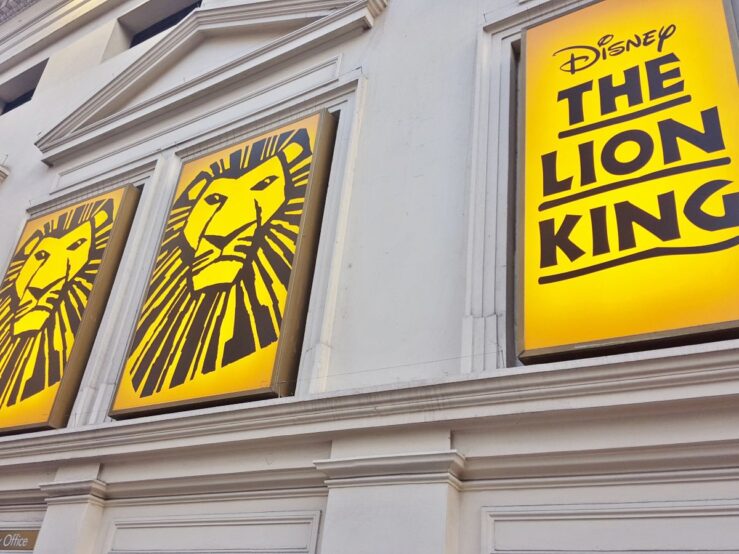 12 hours after arriving at Liverpool Street Station in London in the first place, we now find ourselves in the reverse direction heading back to Stansted Airport again after a most cultural and inspiring day! It feels like we have been in London for a whole weekend, and not just for modest 12 hours!

Where to stay in London
Advertisement
Holiday Inn London Kensington Forum
This hotel is located in Kensington within walking distance of Knightsbridge, Harrods, Royal Albert Hall and the Natural History Museum. Modern, bright rooms. Some rooms have view of London skyline.

Hampton By Hilton London Stansted Airport
This hotel is located in Stansted Airport. It is easy to get to Cambridge or to the city of London by train. Buffet breakfast, luggage storage and 24-hour front desk. Family rooms available.

Do you have 3 days in London? Then read London Museums, Attractions and Sightseeing in 3 Days and check out The 9 Best Areas to Stay in London

12 Hours in London – Ready, Set, Go for the Temple Church: