↓
BOLIVIA  The square in front of the Basílica de San Francisco is filled with traditionally dressed Bolivian Aymara women with long skirts, shawls and bowler hats. The women dressed in this vivid Andean highland style are referred to as cholas or the diminutive cholitas in Bolivia Spanish.
Ainnelise Niyvold Liundbye
This page has affiliate links (if you purchase through our links, we get a small commission at no extra cost to you - thank you!), see our Privacy Policy & Disclaimer.

It is a bright morning in the national administrative capital and we feel absolutely ready to explore the city. We leave our hostel, cross the busy avenue and twist through the neighbouring intricate street pattern to get to the centrally located Basílica de San Francisco.

The church is an Andean baroque church founded as a Franciscan convent in 1547, and the impressive building is today the oldest church in La Paz. The adjoining Plaza Mayor de San Francisco is the perfect place for people-watching, since it is a popular local meeting place. People in La Paz are lively and colourful, and so are the streets at this high altitude.

It is one of those places where you can just sit down on the stone steps in the crowd and experience the hustle and bustle around the church. We spot several older couples passing, where he wears jeans and sneakers, whereas she is strictly traditionally dressed in long skirt and bright-coloured shawl. It is like two different worlds walking side by side. 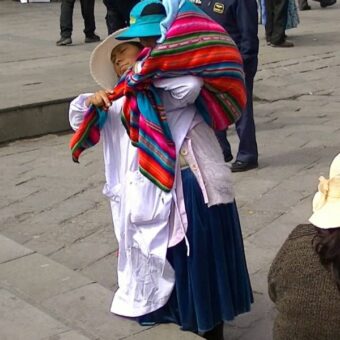 Wrapping or unwrapping your child … 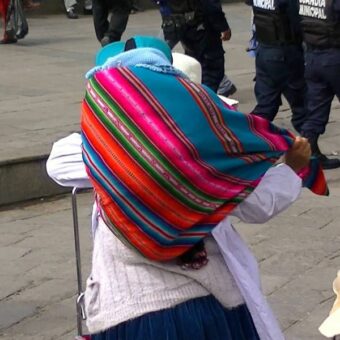 in the colourful woven sling.

Quite a few Bolivian cholitas are within sight – crossing the plaza or even working there as street vendors selling food and drinks. Regular coca cola is sold in a budget version in small plastic bags with a straw through the closure.

We see women carrying their children, food or whatever they need to carry on their backs, wrapped in an aguayo which is a colourfully striped sling made of woven fabric. 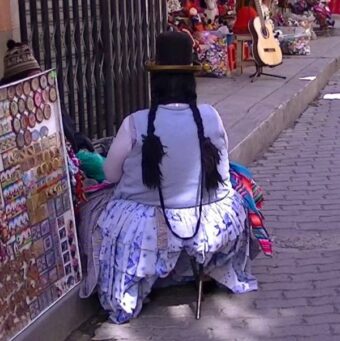 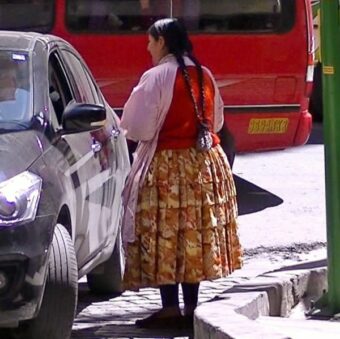 … and yet another one!

View on map
Cholitas in Bolivia

Strolling around we come across the coolest cholitas, native Bolivian women dressed in the traditional way. The Aymara women comb their hair into two braids reaching their hips (traditionally, the men do only one braid!). The braids are attached to each other with a wool adornment, called a tullma, and they are part of the typical chola dress, which includes wide layered skirts, embroidered shawls and sometimes a bowler hat. The chola wardrobe is unique to the Aymara people. 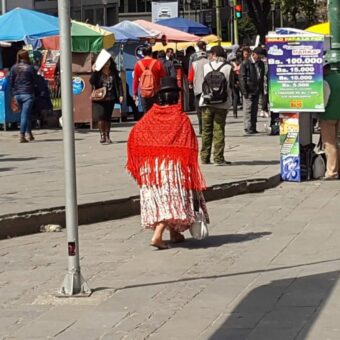 What definitely surprises me is the way this original and relatively old-fashioned society seemingly integrates into modern life here. The indigenous descendants and cholitas in Bolivia seemingly still continue their traditional way of life in the cosmopolitan setting. Today’s cholitas in Bolivia make use of present-day amenities, and yet manage to preserve the charm of the unsophisticated and unrefined, original lifestyle. The younger generation presumably succeeds in creating a symbiosis of their ancestral background and new trends. The girls were brought up in families where the women wore wide layered skirts and embroidered shawls, and at least some of the girls seem to continue the style. 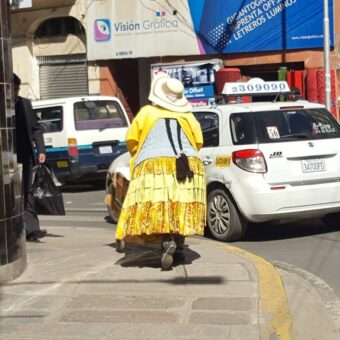 Thus, the traditional chola or cholita fashion, existing ever since Spanish reign in the 1700s, is still alive. The Aymara roots survive here in the modern society. This way of dressing as cholitas may even now be regaining popularity in Bolivia. It seems that the young women today are proud of wearing the chola dress, which can even be dressed appropriately up or down depending on occasion.

The earthy lifestyle and the soul of the native culture are ubiquitous here in La Paz. It is admirable that the Aymara women keep on fighting for their culture – despite their in general lower level of education and a considerable number of them living below the poverty threshold. 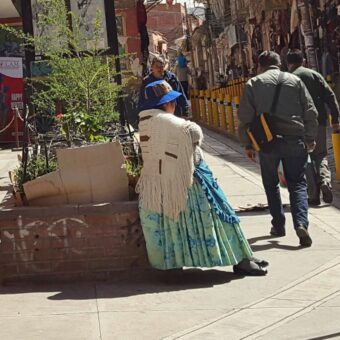 Ascending the hilly streets, we arrive at the quarter around the cobblestone street Calle Jaén, flanked by the finest examples of pastel-coloured colonial architecture in La Paz. The street bears the name of a patriot, Apolinar Jaén, born in 1776, who worked in the trade of coca leaves. He formed a rebel army of slaves, Creoles and natives, and took part in various battles until he in 1810 was defeated and executed!

With this harsh history in mind we are strolling through the, today, very quiet street. Exhausted due to the thin air at this altitude, we finally reach the noteworthy street featuring the unique and colourful houses in beautiful colonial style. 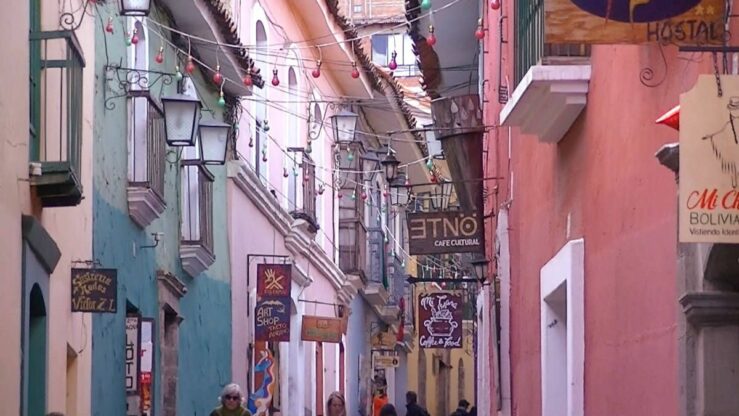 In a street near Calle Jaén, the female owner, a stout woman, persuades us to get into their tiny family-run restaurant with just a few tables. At first sight it does not seem that there is room for us since there are no tables available at all. However, things resolve in a different way here. We are kindly placed at different tables already partly occupied by other guests, and they don’t seem to take any notice!

I wonder how she managed to capture us since there is not even a written menu. Just the word almuerzo at the entrance.

Almuerzo consists of a soup followed by a second course to be chosen among three or four fast mentioned alternatives. Chicken is always a safe choice – well-seasoned and tasty. A drink is even included in the unbelievable price of 9 bolivianos. The drink may well include tap water, though, and since we dare not drink tap water in Bolivia due to water pollution issues, we discreetly add a water purification tablet. 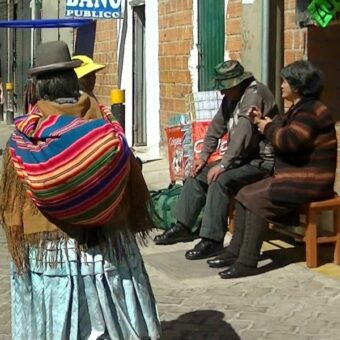 A chat in the streets of La Paz. 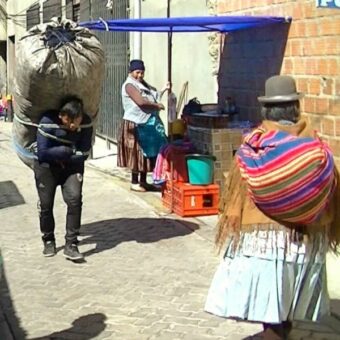 The views from La Paz are amazing with a scenery of the ultrahigh snow-capped Andes Mountain range in the background. La Paz is located within an altitude range between 3,700 metres (12,100 feet) and 4,300 metres (14,100 feet).

Maybe surprisingly, the climate of La Paz is on the border between subtropical highland climate and tundra climate due to the elevation and the resulting strong Andes sun. Nights are cold both in summer and winter, whereas days in general get decently warm. Now, astonished, we see for ourselves that winter days at La Paz altitude, with our eyes closed, indeed can feel like beach days in summer back home. 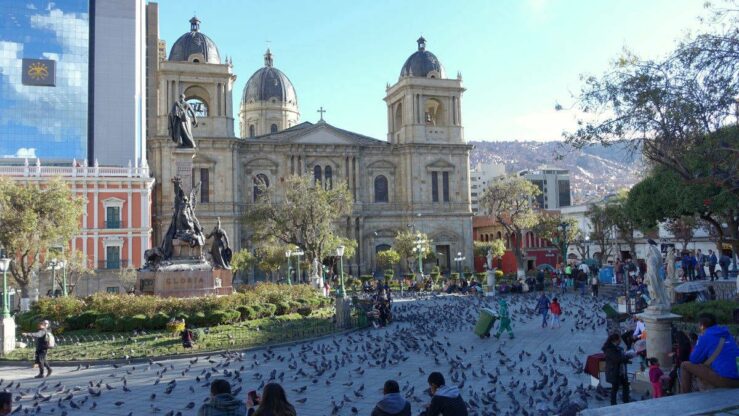 Traffic is intense or, rather, wildly chaotic with travel lights missing everywhere. Traffic jams notably emerge here and there as many vehicles just seem to go as they please. In contrast to the seemingly pure air around the breathtaking snow-white mountain peaks surrounding La Paz, the city itself seems somewhat polluted.

We have been informed that only taxis for four people exist in La Paz. Optimistically, we enquire at the reception if they can maybe do magic and call for a taxi for five. We need to go to El Alto, located, as the name refers to, at high altitude above La Paz.

The receptionist apparently can do magic and promises to provide us with a taxi for five! When it arrives, it turns out that it is a normal-sized taxi where we will just have to squeeze the four of us together on the rear seat!

Where to stay in La Paz
Advertisement
Adventure Brew Hostel
The hostel is centrally located in La Paz near the bus station. It offers both private double rooms and mixed rooms, and some rooms come with a private bathroom. From the top floor restaurant there is a gorgeous view of Mi Teleférico cable car. Sun terrace & bar.

Not much can take us aback any longer. Apparently not either people walking on the highway with their goods. All along the road towards El Alto we watch people walking, crossing, hitch-hiking, resting, whatsoever…

Also a couple of beautifully dressed Bolivian cholitas have chosen to do this stretch of busy road on foot. A woman, carrying her younger child, traverses the road, presumably quite unconcerned, in between the fast going cars! Not a single driver seems to pay any special attention to her or to anyone else walking along the road striping. Looking at it from the local perspective: it is cheap and it is the direct way of going to El Alto!

At 4,800 m in the Andes Peru among Llamas and Alpacas

‘How to be Cool and Chill Cholitas in Bolivia’

How to be Cool and Chill Cholitas in Bolivia: