↓
South America » Ecuador » Meet the Galapagos Iguanas, Sally Lightfoot Crab & Sea Lions…
ECUADOR  The frigate birds floating in the air above the Santa Cruz Fish Market in Puerto Ayora is a beautiful sight. Every now and then they swoop hoping for a treat from the fishermen unloading today´s catch, or from the workers at the market. It is a paradise here for black Galapagos iguanas, red Sally Lightfoot crab families, shiny sea lions and all the other unique animals crowding around.
Ainnelise Niyvold Liundbye
UPDATED: 29 MAY 2021
This page has affiliate links (if you purchase through our links, we get a small commission at no extra cost to you - thank you!), see our Privacy Policy & Disclaimer.

Santa Cruz Fish Market is a most lively place. In addition to the fish on the counter, the place abounds with interesting animals counting species from the glistening sea lion, the black Galapagos iguana and elegant frigate birds to fast, red Sally Lightfoot crabs. A couple of pelicans and herons fight for attention, waddle across the market floor and line up begging behind the central counter. They are waiting for scraps and even attempt to steal whenever possible.

Inspiration for your Galapagos trip: A taxi driver is our guide and Tortuga Bay and Bay tour to see blue-footed birds

One of the handsome Galapagos iguanas rests in the background on the wharf. It remains for a long time as motionless as a statue. If you didn’t know better, you could mistakenly believe it was dead, but it certainly isn’t! Galapagos iguanas just don’t move a lot during the day. 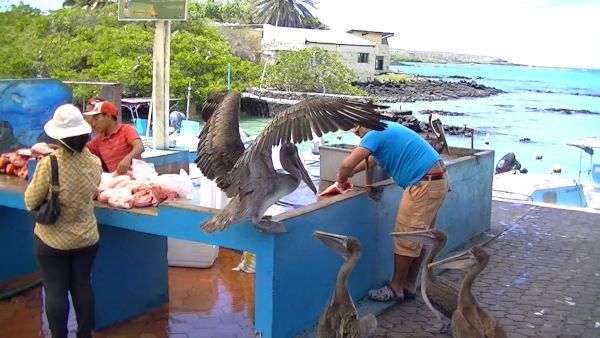 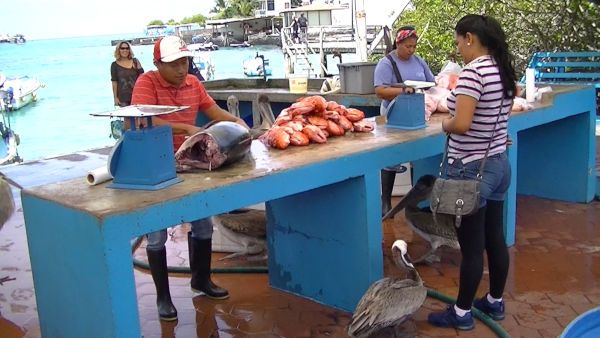 You can stay entertained for a long time watching the birds soar into the air after being fed with bits of fish trimmings. The orange and red Sally Lightfoot crabs emerge now and then unexpectedly from their hideouts in between the rocks. It is indeed a great place for photography. 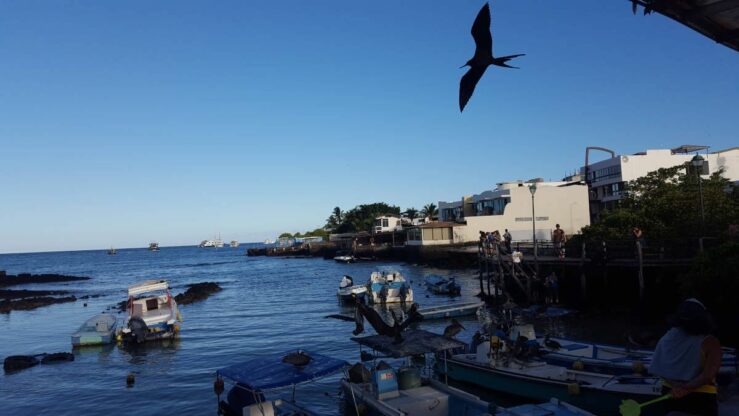 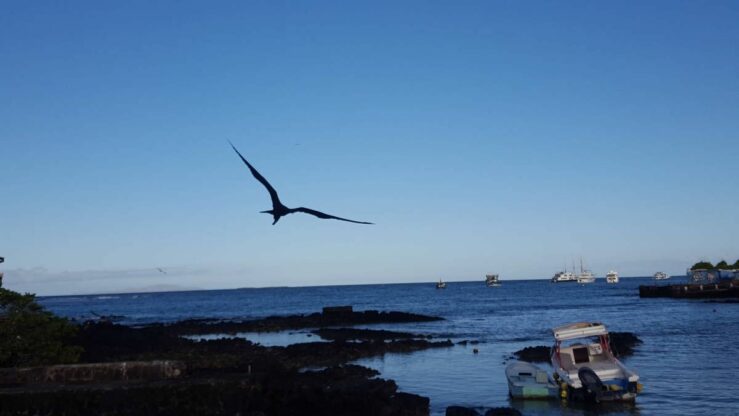 The male frigate birds have a characteristic patch of red skin on the throat, called a gular sac. Most of the year it is barely visible. During the breeding season it inflates the pouch in order to attract the female birds. It is a beautiful bird that lives across subtropical and tropical oceans. In order to steer it uses its deeply forked tail. 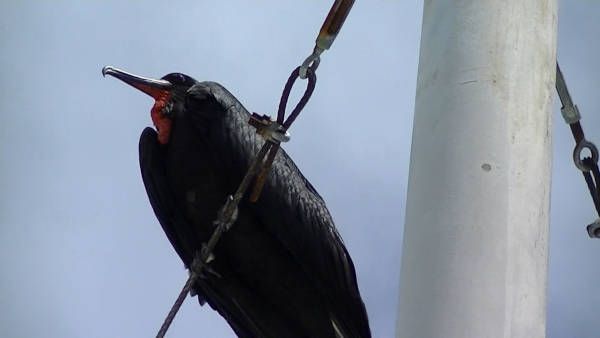 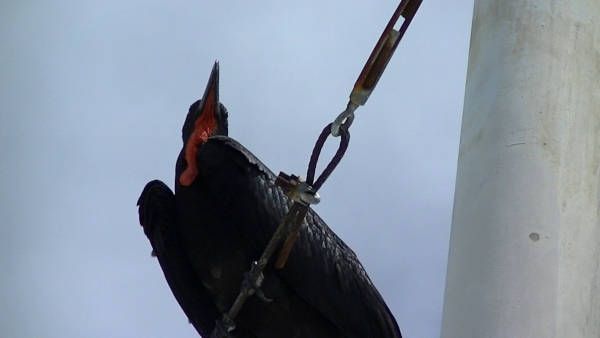 Two sea lions lie lazily on the other side of the counter, not paying attention to the crowd watching. A third one looks ready to snatch a bite of fish or handouts from the workers, gutting and weighing the freshly caught yellowfin tuna and colourful scorpion fish, locally known as brujo. Locals come here to purchase fish to cook at home for dinner or to serve in their restaurants. Tourists, going for a stroll, stop by the sight and eagerly contemplate the pile of brujos and lobsters in plastic boxes. 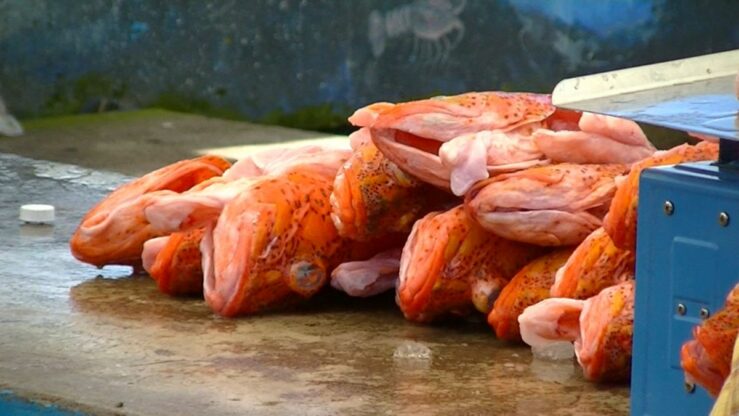 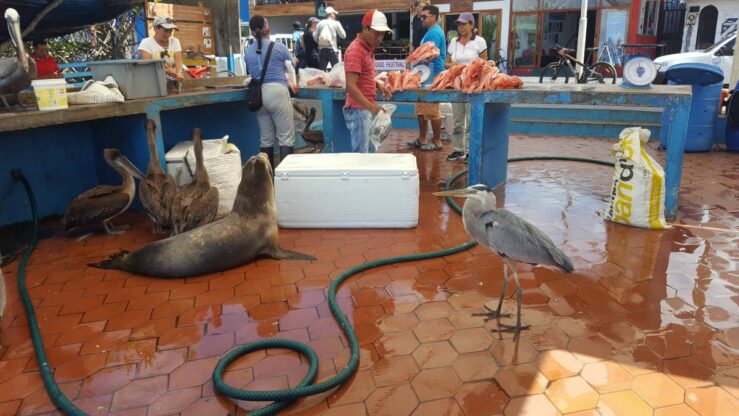 Advertisement
Have you got all travel essentials for your Galapagos trip?

You need to watch your steps here. Keeping the required distance of 2 metres (6 feet) to the huge birds and sea lions is one thing. Another is to avoid stepping on lava lizards or marine iguanas, which are ubiquitous along the waterfront.

A couple of fishermen have made themselves comfortable and take a rest in their boat after bringing their catch ashore. They don’t seem to be in a hurry and chat with the fishermen in some of the other boats, moored in the small harbour. Soon, a sea lion appears from the water and hangs out for a while just beside the boat, checking if there is freshly caugt fish to go for. 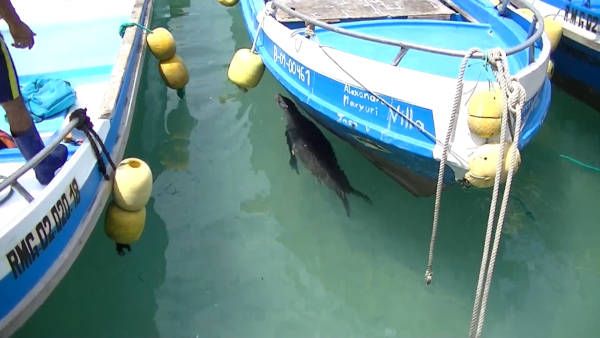 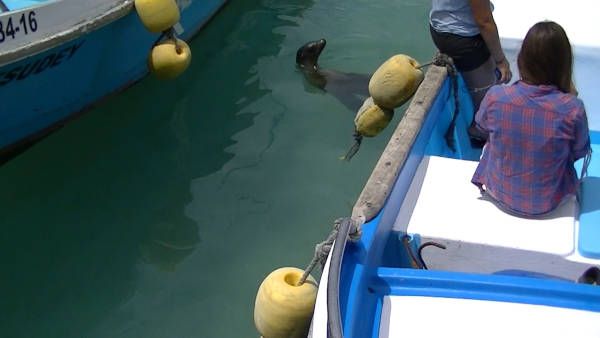 Further away, two eagle rays glide underwater near the surface. Their sharp contours and their characteristic, spotted pattern are clear in the calm water. All of a sudden one of the rays jumps out of the water with a gigantic splash.

On another small pier along the waterfront a couple of black Galapagos iguanas, also known as marine iguanas, hang out among an abundance of large, red Sally Lightfoot crabs. The elegant crabs dot the shore everywhere on the archipelago. When someone approaches, the Sally Lightfoot crabs immediately spurt away and hide in between the stones. 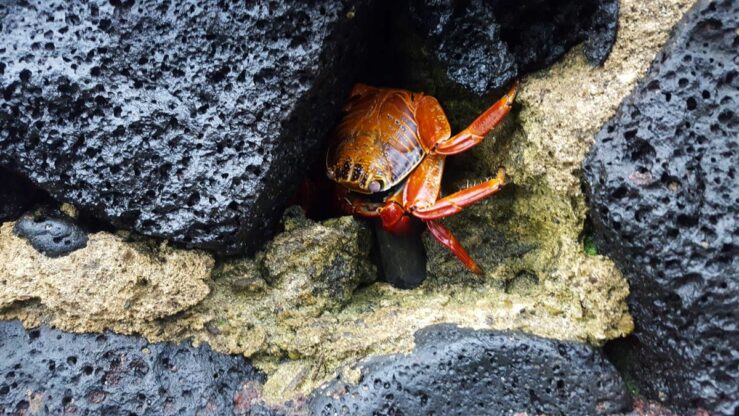 All of a sudden a boy shouts in a voice full of excitement: ‘Señor, señor, tortuga!’ and points at the sea bottom.

At first, nothing special can be spotted on the greyish and rocky bottom. But then suddenly some of the rocks seem to set in motion. It is a giant sea turtle moving around all close in shallow water. And then it gently raises its tiny head and slowly begins to swim towards the surface.

The sea turtle keeps swimming majestically near the small pier and then, finally, the head pops up above sea level. A sea turtle can stay for a pretty long time under water holding its breath, sometimes up to several hours, but, eventually, it needs to come up to breathe.

People assemble on the pier to contemplate this wonder of a sea turtle. If something can unite both locals and tourists, it is the fascinating animals. It is obvious that the locals are eager to share their knowledge about the creatures and how to get the best chance to watch them. It is easy to find yourself in a spontaneous conversation with people, you would probably never have addressed otherwise. People here are amiable and outgoing, so it is easy to get information about any subject you may like! 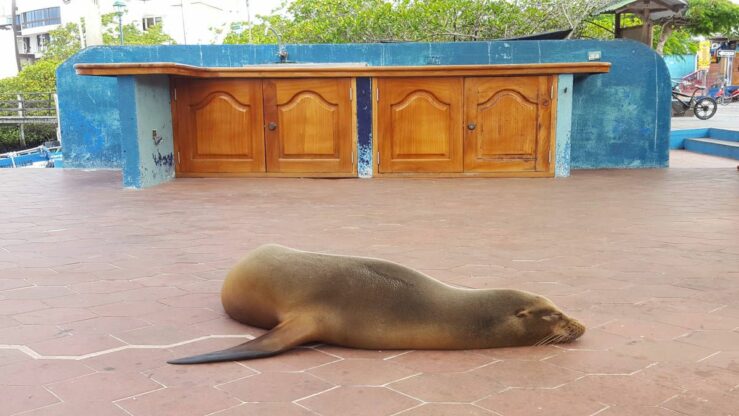 Continuing along the waterfront, you will reach the premises of Charles Darwin Research Station. It was inaugurated in 1964 and is a centre for study and conservation of species endemic to the Galapagos Islands. There are programmes for both endangered animals and plants.

Young giant tortoises are hatched and raised through a breeding programme with the aim of releasing them into the wild when they grow up. The programme has proved useful in order to augment the number of the threatened giants on the islands. Walking around in the Research Station gives us the opportunity to see the baby tortoises at various ages. You can learn about the variations of the species that so inspired Darwin to his theory of evolution and made the archipelago renowned all over the world. 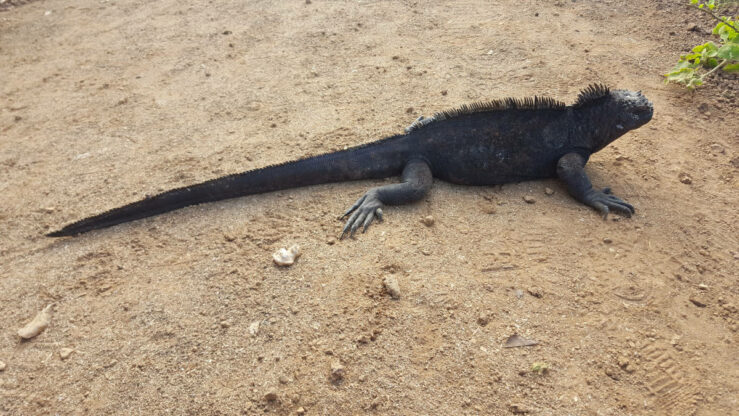 ” The iguanas are among the laziest reptiles in the Galapagos – the iguana can sometimes appear dead, but it isn’t.”

Outside there is a group of Galapagos iguanas literally sitting on the path. One poses for a photo! Another more energetic individual fights its way through the terrain. However, the movements of the Galapagos iguanas are slow on land due to their compact and heavy bodies. 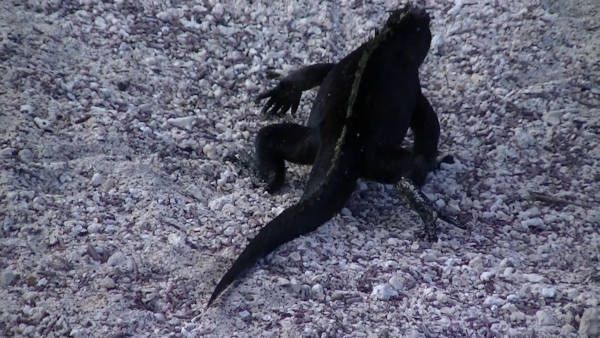 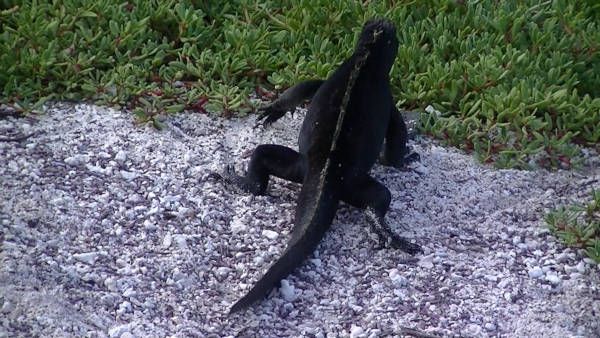 Trending on the website now: 9 Unique Spots in Gothenburg and The Little Mermaid Statue & Story
Disclosure: This page may contain affiliate links - if you click on our links, we may earn a small commission at no extra cost to you, see our Privacy Policy and Disclaimers. As an Amazon Associate we earn from qualifying purchases. Thanks for supporting our website!
↑
Privacy and cookie notice
We use cookies for technical, performance, analytical and advertising purposes, as well as to remember your preferences. By clicking ‘Accept’, you consent to the storing of all cookie categories on your device, as detailed in our Privacy Policy, which also specifies how we collect, use and store personal and other data. Use 'Settings' to manage your cookies settings. If you click ‘Reject’, only necessary cookies will be stored, but the website may not work as intended. Manage consent anytime in the Cookies link at the page bottom.