↓
South America » Ecuador » Galapagos Sharks, Brujo Fish & Harbour Life in Puerto Ayora
ECUADOR  The harbour of Puerto Ayora is a vivid place abounding with life. Tourists, pelicans, frigate birds, the endemic Galapagos sharks and spotted eagle rays infiltrate the pier, the air and the water. Smaller creatures such as the numerous Sally Lightfoot crabs, prickly sea urchins and nimble lava lizards complete the picture of the harbour being among the most lively spots in town.
Ainnelise Niyvold Liundbye
UPDATED: 29 MAY 2021
This page has affiliate links (if you purchase through our links, we get a small commission at no extra cost to you - thank you!), see our Privacy Policy & Disclaimer.

Today the central square in town is bustling with people! The square with the two volleyball courts is located at Puerto Ayora harbour, just opposite the boat pier. Two men’s teams are playing dedicatedly, fighting, entirely sacrificing themselves to the match. The players are fully concentrated and passionate about the game as if it were an important cup. We get the impression, though, that the matches are either a weekly activity among the locals or improvised at short notice. They wear no fancy clothes, but are simply playing in each their individual type of outfit.

Inspiration for your Galapagos trip: A taxi driver is our guide and Tortuga Bay and Bay tour to see blue-footed birds

Tourists, locals, children and anyone staying or living in Puerto Ayora and coincidentally being around, gather at the courts and become cheering spectators of two simultaneous and exciting matches.

Returning from the fish market, where we have stayed for a while contemplating the colourful and interesting catches, we now blend into the joyful crowd. In the background yellow water taxis go back and forth between the main pier, cruise boats and the small pier opposite, located some hundred meters across the bay at the Angermeyer Point near the Finch Bay Hotel. The bay is indeed a busy place with thousands of Galapagos sharks, hectic boat traffic and organised tours as well as dozens of cruise ships anchored further out for a day or two. 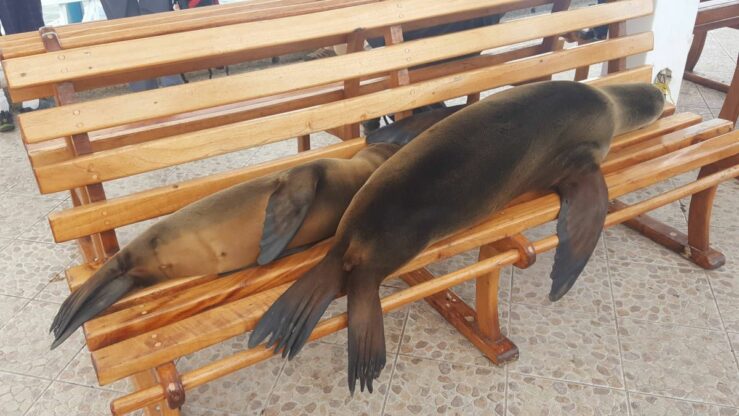 We are so tired | Photo: Travel In Culture

On the pier the sea lions reign. You are not allowed to push them away from the benches, which they happily and conveniently use for a rest. Neither are you allowed to touch them to animate them to move in case they block your way. The rules are simple: The sea lions (as well as any other species on the islands) rank higher in the hierarchy than humans. You must at all times keep a required minimum distance of 2 metres (6 feet) from the animals. This is why the small sea lion kings literally rule over Puerto Ayora! 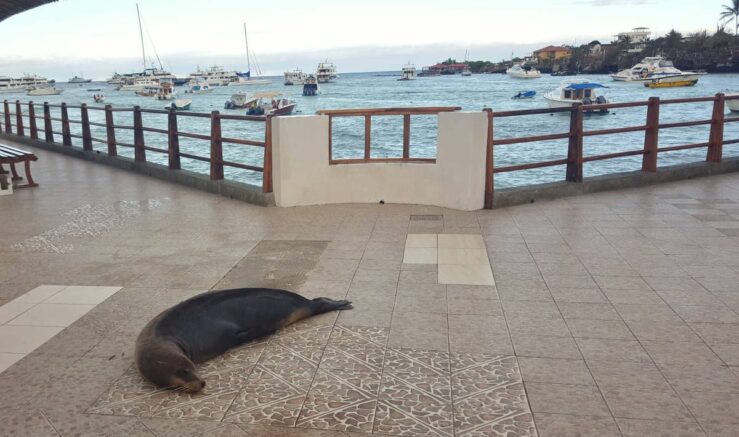 A resident on the pier keeps an eye on taxis, tour boats and cruise ships | Photo: Travel In Culture

Advertisement
Have you got all travel essentials for your Galapagos trip?

We stroll to Laguna de las Ninfas, a lovely lagoon where saltwater meets fresh water, which is actually a hidden gem in Puerto Ayora. The lagoon and its special water conditions is a most interesting biome with its diverse and rich array of wildlife, especially fish and birds. It is seemingly a quiet place, not crowded with tourists.

Continuing, we walk through mangrove forest on the boardwalk surrounding the enclosed lagoon. It is in general a bit dilapidated, like many other constructions in Puerto Ayora. We read along the boardwalk that there are four distinct kinds of mangroves around the lagoon. While ambling along the water, we look out for the various kinds, and seem to spot at least the white and the red one. 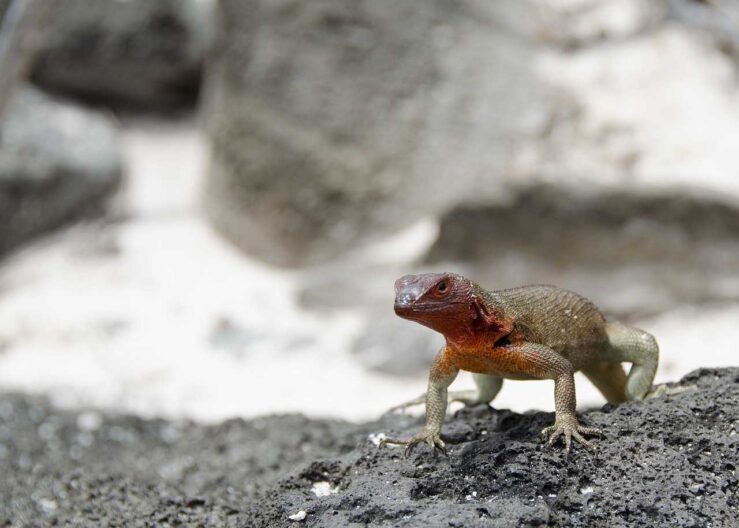 We need to tread with caution not to step on the lava lizards. These reptiles are often well camouflaged against discovery as they have adapted in colour to the surroundings. The Galapagos lava lizards happen to vary in colour depending on specific island and location, ranging from dark greenish brown to yellow and gold with brown and black spots. The females can have a red throat or head. Again, we are amazed how well they integrate into nature when they stay completely immobile.

Apparently, young people meet up with a friend or two in the evening, on the rickety platforms, and spend a couple of hours chatting and listening to music. It is relaxing to be here and we stay for a while contemplating underwater life in the pond. We catch sight of a couple of fine, striped aquarium fish swimming under the boardwalk. A little bit later a disturbance in the water near the surface puzzles us. To our surprise, it is a beautiful spotted eagle ray. It is fast and we lose track of it. Later, the spotted eagle ray (or another one) attracts our attention again by a few times jumping out of the water with loud splashes. 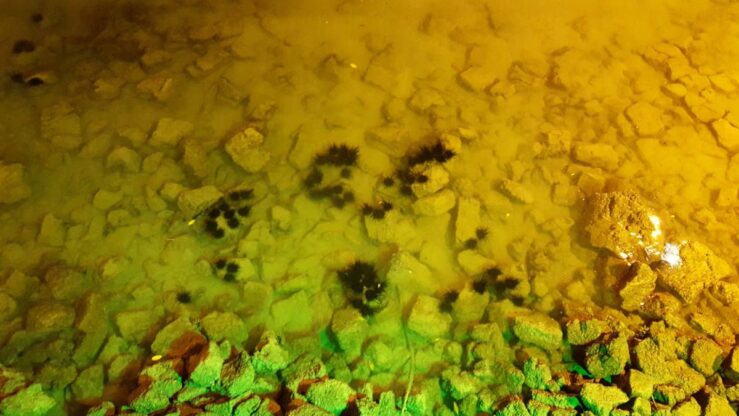 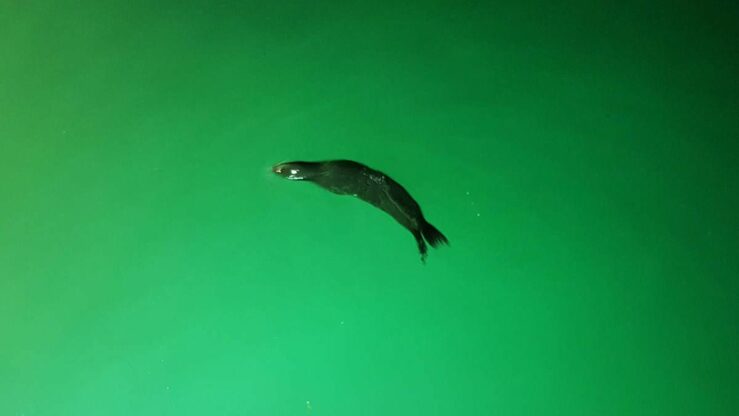 There is a whole world of Galapagos sharks and sea urchins beneath the playing sea lion | Photo: Travel In Culture

After sunset, the water around the pier is illuminated in various colours, allowing us to examine the marine life from a different perspective. We are watching not just a few, but hundreds of Galapagos sharks crowding around, a couple of top agile sea lions swimming, seemingly pleased with the water as their playground, a few spotted eagle rays and vigilant pelicans on the railing.

The Galapagos sharks belong to just one of the many shark species you can observe around the Galapagos Islands. They don’t pose any danger to humans since they are relatively small.

Where the water is shallow, thousands of sea urchins are highlighted by green neon light, revealing their presence. 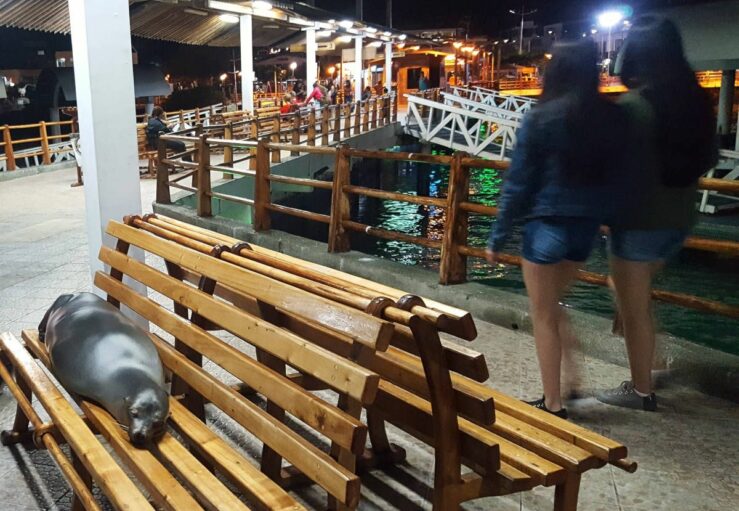 It is Friday night and we watch the last preparations of an open-air party in the large square in front of the harbour – which seems to be some kind of charity event.

The majority of the younger generation in town have gathered in front of the stage, and the harbour resounds with loud, popular music. However, we are a bit surprised to hear what kind of music is trendy here. They play a lot of music being popular in Europe at least 20 years ago. At some point it culminates with the crowd all dancing the old Macarena dance! 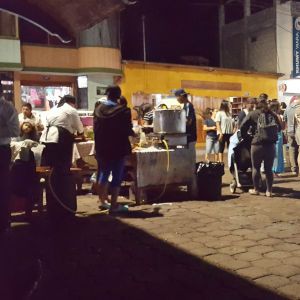 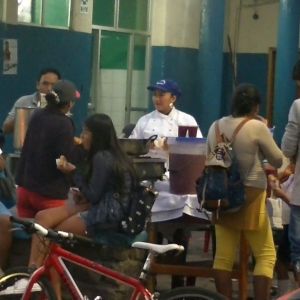 For dinner we return to the local market square. Meat, filled ‘papas’, giant corn cobs as well as a spicy coriander salad. The restaurants definitely need to make an effort to compete with the local market cooks and the atmosphere in the streets behind our hotel!

In Puerto Ayora there is a street, the Charles Binford Street, where you can eat at Los Kioskos, which are small restaurants with open-air setting. Every afternoon and evening the street is closed off to traffic and is turned into a restaurant street with tables lined up in the middle. Prices are extremely reasonable, especially when it comes to fish and seafood. Almuerzo or menu del día consists of two courses with a drink included. In the restaurant street Los Kioskos it can be as low as 5-10$. A whole brujo fish to be shared among three people goes for as little as 25$, and a lobster is an affordable luxury: around 20$.

The restaurants take pride in their food and offer delicious, grilled brujos and colourful lobsters, exhibited in piles or boxes outside. Inspired by Santa Cruz Fish Market with its tempting orange brujos, or scorpion fish in English, we decide that we absolutely must try one of those for dinner. The home-cooked fish with a truly exquisite taste is definitely to our liking!

Strolling around the fish market early next morning, we are surprised to see that it is now completely empty apart from the occasional sea lion taking a nap. Either the fishermen are still on the sea, or it is a rest day… Most surprisingly, there are not even any pelicans, frigate birds or marine iguanas around. 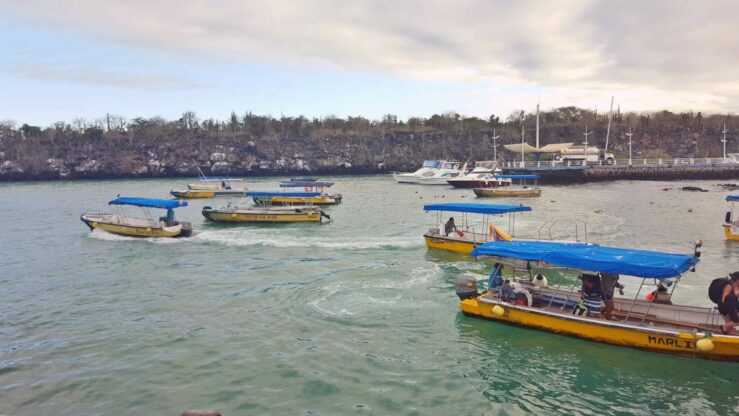 Water taxis in the harbour of Puerto Ayora | Photo: Travel In Culture

Water taxis are extremely cheap. We paid only $0.50 per person to go from the main pier in Puerto Ayora to the Angermeyer Point across the Academy Bay. During the few minutes it takes to cross, we see maybe a hundred Galapagos sharks in the water. From the Angermeyer Point you have access to Playa de los Alemanes – a fine beach both for snorkeling and swimming, to the old salt lagoons and to the crevices, Las Grietas. The bay taxis are frequent and leave when they are filled up.

Keen on a Local Hotel on Santa Cruz Island, Galapagos?
When You Fly into Galapagos and Land on Baltra Island
Travel Insurance