↓
NORWAY  Alesund, or Ålesund in Norwegian, is the surprising gem in Norway, which you eventually reach on a trip to or along the Norwegian West Coast. It is built on a number of small islands dripping out into the sea, setting the scene for picturesque photo shots in the unique Norwegian Art Nouveau town.
Ainnelise Niyvold Liundbye
This page has affiliate links (if you purchase through our links, we get a small commission at no extra cost to you - thank you!), see our Privacy Policy & Disclaimer.
Table of Contents

1. What to see in Alesund
2. Aksla Viewpoint at Byparken
3. Beyond Alesund
4. Where to stay in Alesund?

Around the beginning of the 1900s, Europe (including Alesund Norway) experienced a new architectural and artistic style within decorative arts, the Art Nouveau, also known as the Jugendstil in German, el Modernismo Catalán in Spanish and the Modern Style in English.

The style had some variations depending on the leading architects and main artists representing this new genre in each of the big European cities. Barcelona had its own style, and so had Vienna, Brussels, Glasgow, Prague and the other cities which embraced the new style and had architects who desired to influence it. 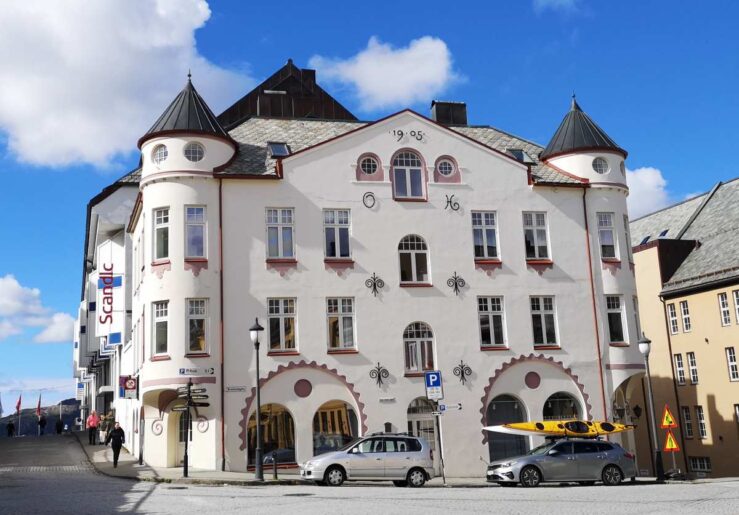 Also Alesund became such an Art Nouveau town, maybe a bit by chance. As it happened, a major fire ravaged Alesund in January 1904. Ten thousands of citizens were made homeless overnight. When the houses were rebuilt, mainly in the years 1904-1907, the architects were now influenced by the new, prevailing style in Europe, the popular Art Nouveau.

What still today makes Alesund really unique is precisely this fascinating architectural style found everywhere in the streets on the outstanding building façades – the early 1900s style, the Art Nouveau. The views are absolutely breathtaking – especially from the neighbouring mountain overlooking the city. 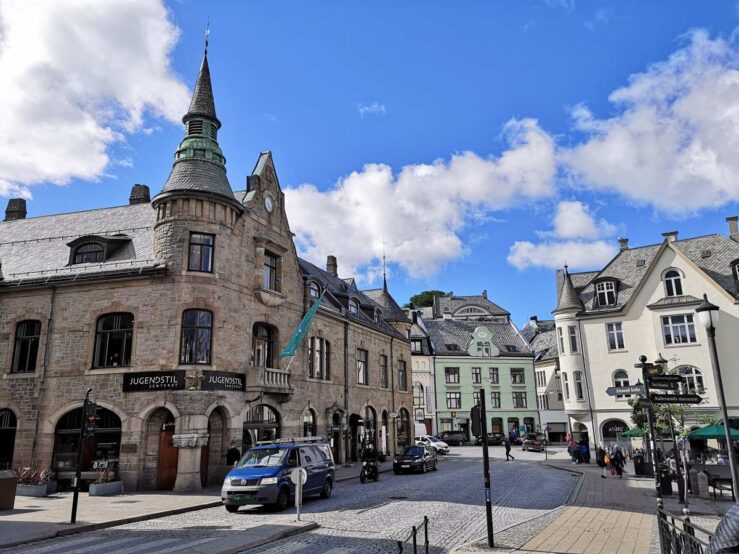 1. What to see in Alesund

Going for a stroll through the historical centre of Alesund, you will spot the eye-catching architecture on every street corner. The subleties of turrets, spires and beautifully ornamentated colourful wooden houses together create the special atmosphere of a bygone time, yet surprisingly and harmonically integrated with the modern Norwegian city.

Alesund´s popularity with visitors is obvious given its special cultural scene. Cosy cafés, the odd seafood restaurant and intriguing small boutiques all contribute to the attractiveness and character of the architecturally spectacular coastal city. 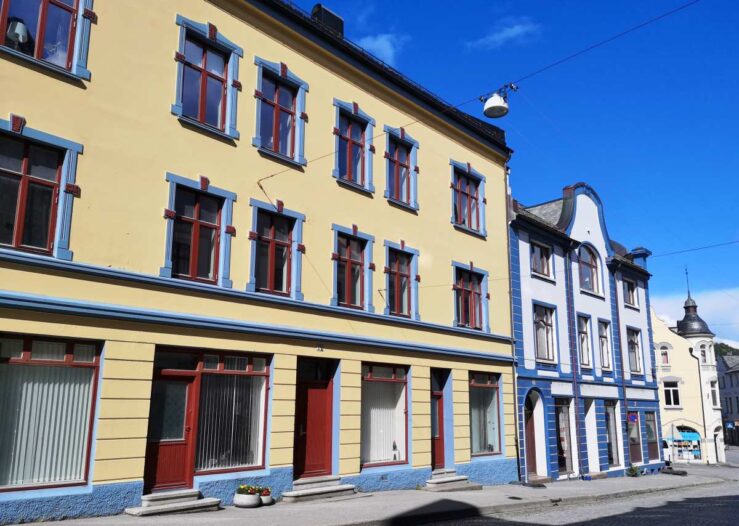 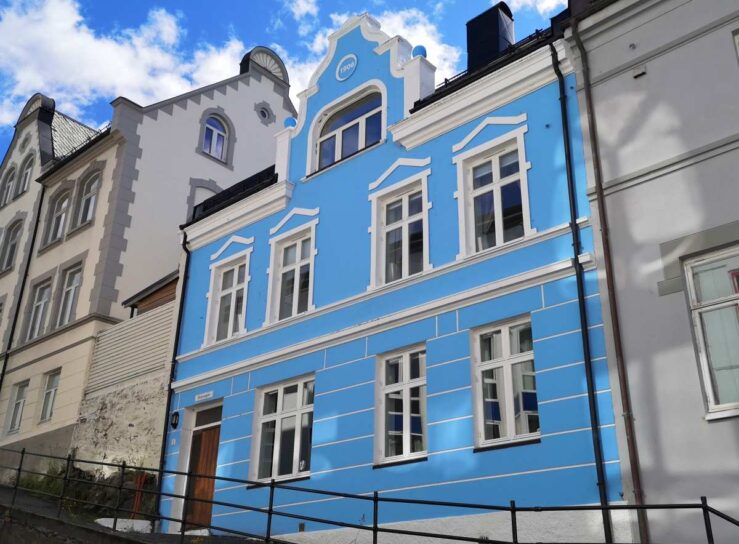 You will notice the impressive pharmacy, Svaneapoteket, from 1907, which is both a museum and a national centre of Art Nouveau. The Ålesund Art Nouveau centre Jugendstilsenteret & KUBE is located inside the spectacular pharmacy. Today, the building features remarkable, authentic objects from the age, as well as temporary exhibitions.

Walk along Skateflukaia, Kongens Gate, St Olav Square, continue over the iconic bridge, Hellebroa with a stunning view to a Venice-like canal sea, discover the fortification in Bakkegata, the old church, Kipervikstorget, the City Hall and all the other beautiful and unusual façades with a touch of Art Nouveau in central Alesund. 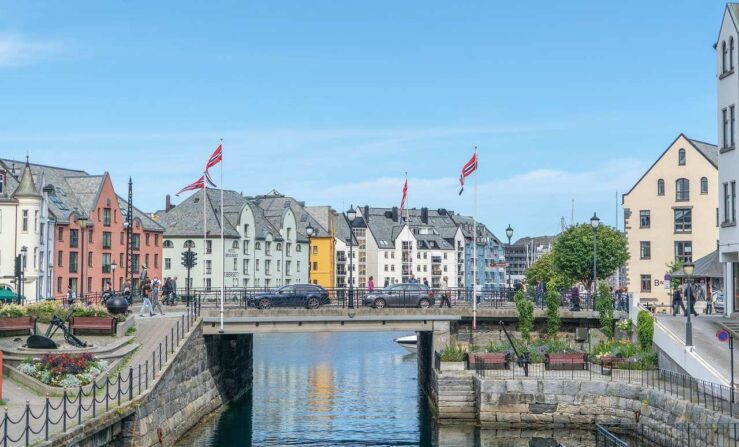 At Molovegen you can explore the old wooden warehouses and vividly couloured fisherman’s houses of which some today have been turned into enticing cafés and fascinating museums. 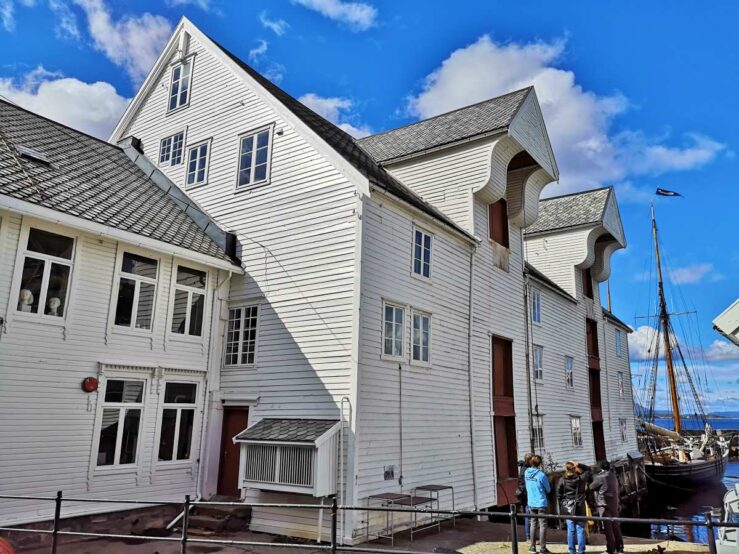 What to do in Ålesund? | Photo: Travel In Culture

Continue along the pier past a couple of traditional old ships towards the iconic red lighthouse at the end of the pier, marking the entrance of Alesund Harbour for visitors arriving from the seaside. 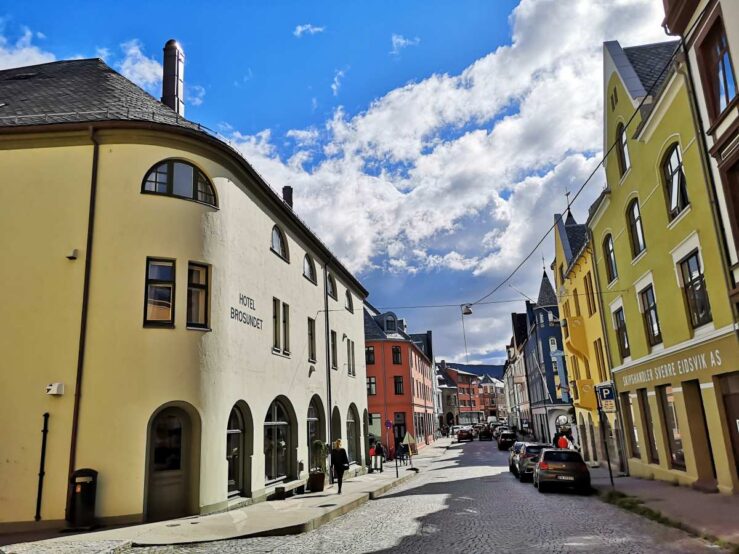 To obtain the best panoramic and picturesque-postcard views of Alesund, you will climb the 418 steps to the Fjellstua viewing point at the city park, Byparken. It is an interesting hike with several panoramic lookouts along the way, among others the Byrampen (the city ramp) and Strykejernet (the iron). While ascending the steep mountain, you can follow the number of steps already completed (step numbers are printed on some of the steps!). 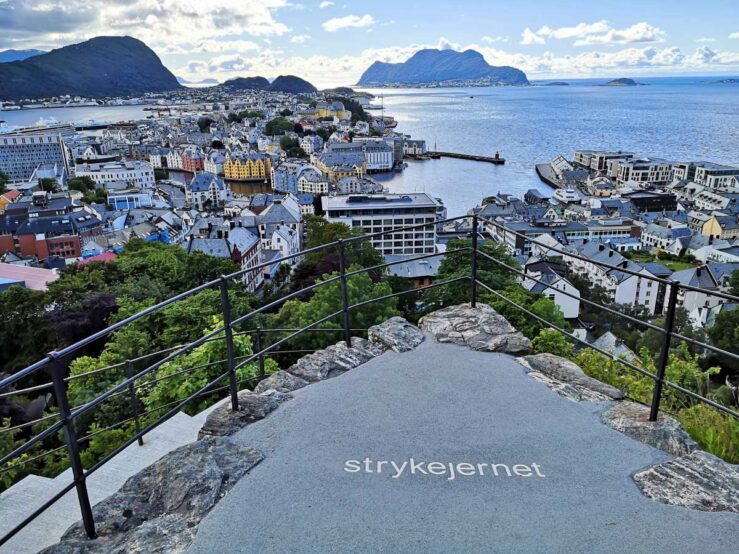 It is from the Aksla Viewpoint that the iconic ‘aerial’ shots of Alesund are often taken. You have an absolutely fabulous view of scenic Alesund from up here both in the morning, during the day and at sunset!

Alesund is unique in Norway – and in Europe. Besides rocks, islands, islets, pristine sandy beaches and freely roaming sheep carrying catchy bells just a fem kilometres from the central streets, Alesund is really one of the top cultural cities in Norway. 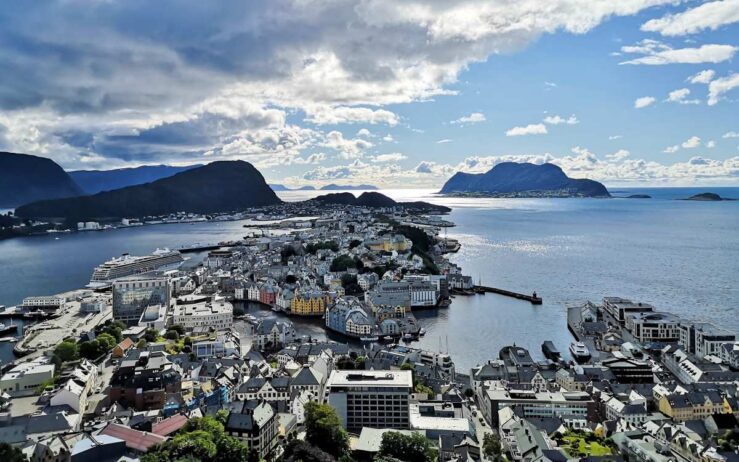 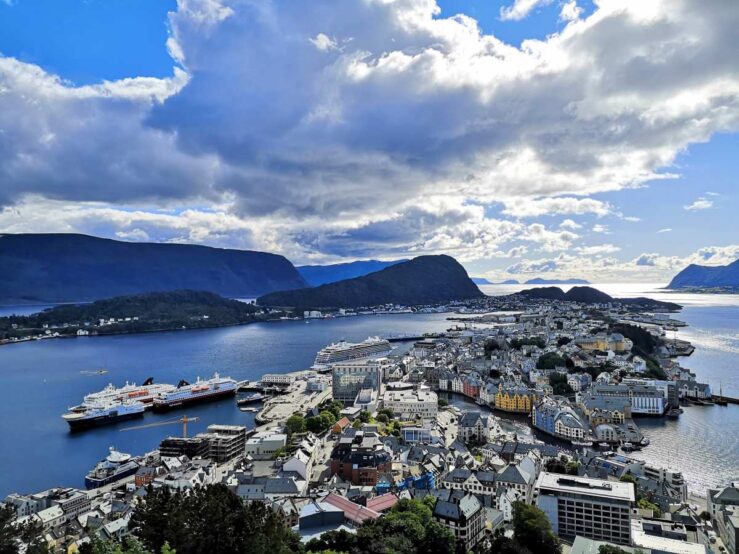 In addition to Art Nouveau, the Alesund area offers a lot of other activities and interesting sites to visit such as the Sunnmøre Museum, an open-air museum of 55 traditional old houses, the Atlantic Sea Park, Atlanterhavsparken, with otters and penguins, the Alnes Lighthouse on Godøy and the Slogen Mountain for a fabulous hike up the renowned summit in the Sunnmøre Alps.

You can also opt for a cruise into the Hjørund Fjord or the Geiranger Fjord, some of the most beautiful fjords in the world, or go to study the unusual puffins on Runde, the bird island, where 100,000 pairs of puffins nest every year. The town has got something for everyone, but the Alesund Art Nouveau houses are definitely one of the major draws!

You can also make Alesund part of a trip along the Norwegian West Coast: Things to Do in Norway – Trip West Coast – Fjords & Cities 12 Days 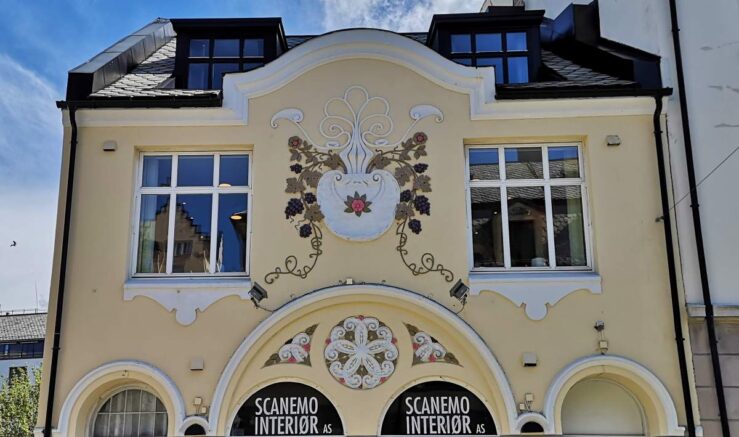 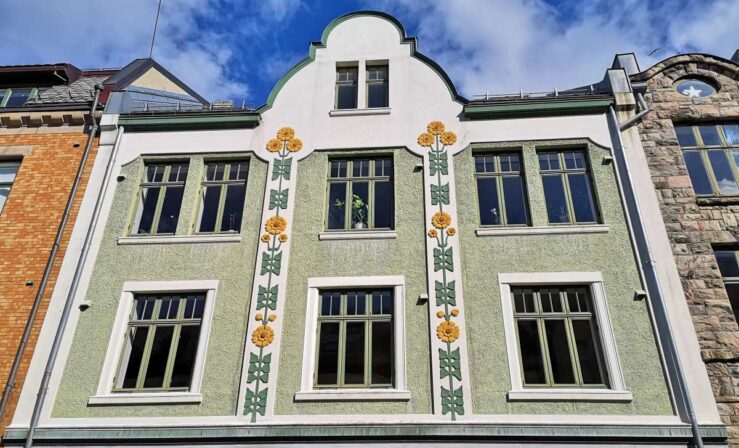 4. Hotels in Alesund
Where to stay in Alesund
Advertisement
Quality Hotel Ålesund is situated in the Skansekaia Harbour area, overlooking the sea. Rooms feature modern Art Nouveau-inspired decor and either sea or street views. The hotel has a private quay and free WiFi.

Hotel 1904 is a boutique hotel that is the oldest hotel in Ålesund, built in 1904 in the Art Nouveau style. It features an on-site architecture office and is centrally located and near the Aksla Mountain.

Going to Oslo? Then take a look at 9 Cultural Things to Do in Oslo: Opera House, Akershus, Munch Museum

Alesund or Ålesund – The Art Nouveau Town in Norway 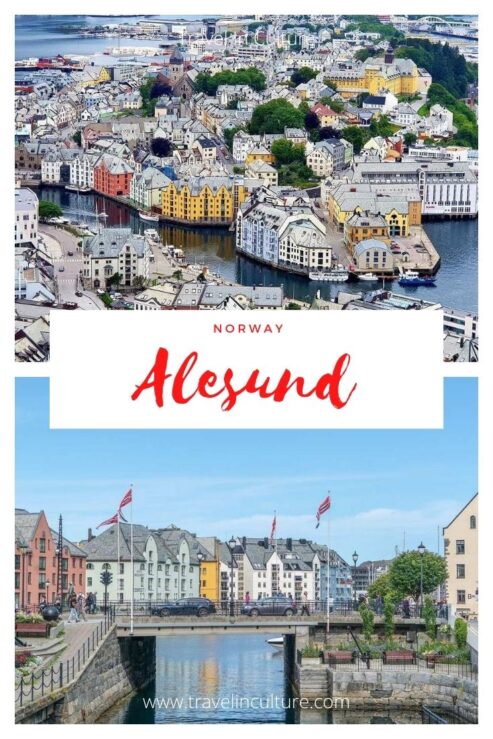 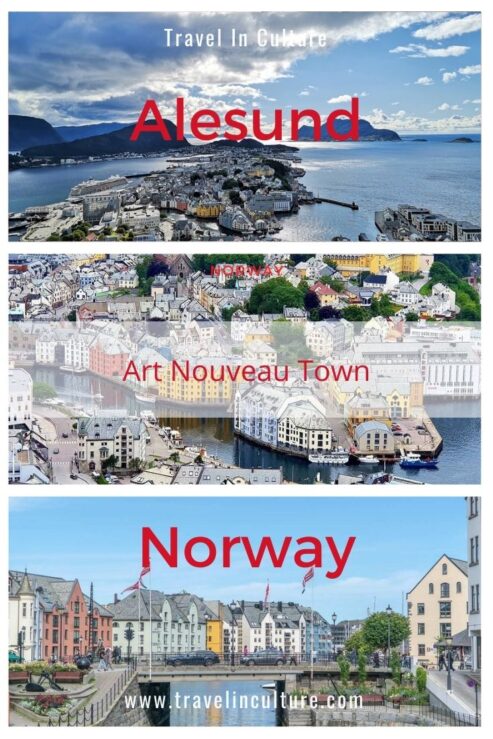