↓
GREECE  Rhodes City in Greece is world-famous for its ancient wonder, the Colossus of Rhodes, one of the Seven Wonders of the Ancient World. What is the history behind the ancient Colossus of Rhodes and where is the site today?
Ainnelise Niyvold Liundbye
This page has affiliate links (if you purchase through our links, we get a small commission at no extra cost to you - thank you!), see our Privacy Policy & Disclaimer.
Table of Contents

-> Where to stay in Rhodes City?

Rhodes, the largest of the Dodecanese islands in Greece, as well as the famed site of the ancient Colossus statue, is today a popular Aegean island to visit. Besides featuring beautiful beaches, pine forests with hiking trails, breathtaking cliffs, idyllic churches, and quaint villages dotted with white houses and lively tavernas, Rhodes is also an island oozing interesting ancient history and exciting myths.

The city of Rhodes is a gem of an old medieval town in Greece, and it is kind of a time travel to stroll around its cobblestoned lanes. When you’re done with the historical sightseeing, there are loads of other things to do such as spending a couple of hours at the city beach, or leaving Rhodes town to explore the varied landscape, the Valley of Butterflies, and other scenic locations in Rhodes. The itinerary may include visiting one of the wineries that continue the traditional grape cultivation and island wine culture, which existed already in the 7th century BC and is known from engravings of the sun god Helios, or a rose, on the amphorae. These are ancient symbols or ‘trademarks’ of the Rhodian wine!

Where to Stay in Rhodes City
Advertisement
Evdokia Hotel hotel located in a renovated 19-century building in the Old Town of Rhodes, 100 m from the port and 200 m from the Medieval Castle. There is a shared lounge and a terrace overlooking the town.

Trinity Boutique Hotel boutique hotel with family rooms and an excellent location in Rhodes Town – near the major sights as well as Elli Beach. The hotel has a shared lounge, a garden, and some hotel rooms feature a balcony. 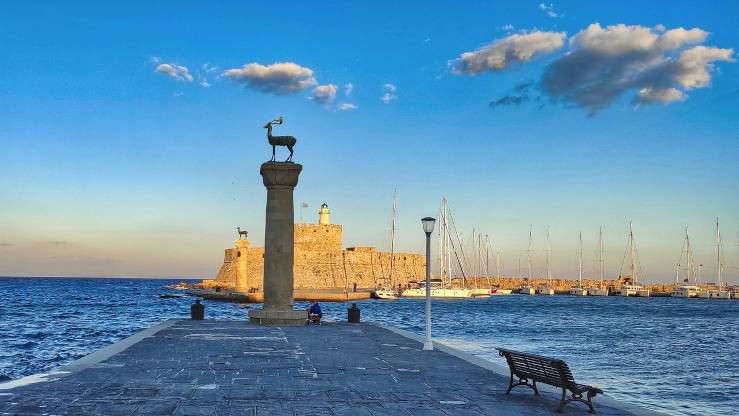 Since antiquity Rhodes has played an important role as site of one of the Seven Wonders of the Ancient World. The Colossus of Rhodes stood at the harbour entrance, welcoming all seafarers to the island. The gigantic statue was created by Chares of Lindos around 300 BC and represented the sun god, Helios. Not surprisingly, it took 12 years to build!

Today, the Colossus of Rhodes is long gone – and Mandraki Habour has no longer the feet of the Colossus standing on each their side, straddling the harbour entrance. Anyway, it probably never had – it is a misconception dating to the Middle Ages. Such an immense construction (70 cubits, or 105 feet / 32 metres) would have been impossible due to the width of the harbour entrance – it is far more likely that it stood on one side only! However, the myth of the colossal straddling statue still thrives! 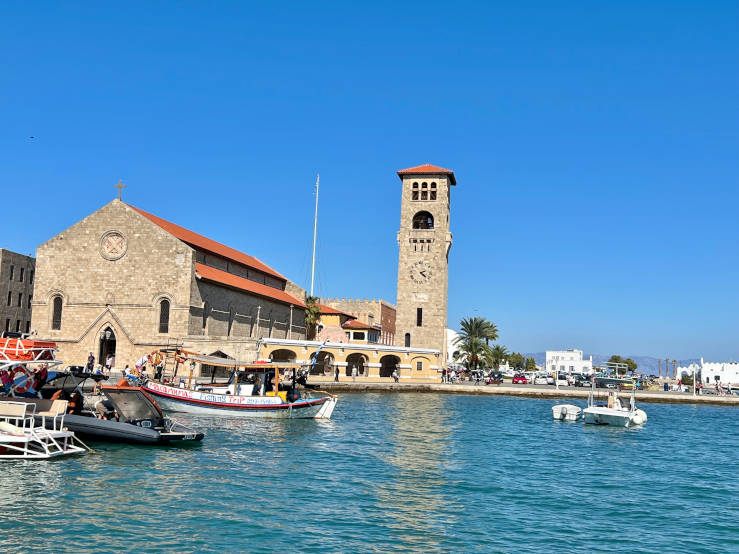 Instead of the Colossus, Mandraki Harbour today features two elegant and far more slender deer named Elefos and Elafina, one on each their column on the two sides of the opening to Rhodes City! The fort of Agios Nikolaos, dating to the 1460s, is located next to the deer columns.

A devastating earthquake hit Rhodes in 226 BC, causing damage to the city, as well as to the Colossus. In the 7ty century AD the Colossus was looted for material and, little by little, the famous statue was devastated by the Arabs who had taken over the city. They used the material to produce new coins! That was the end of the Colossus of Rhodes era – and today the straddling Colossus has become a popular myth! 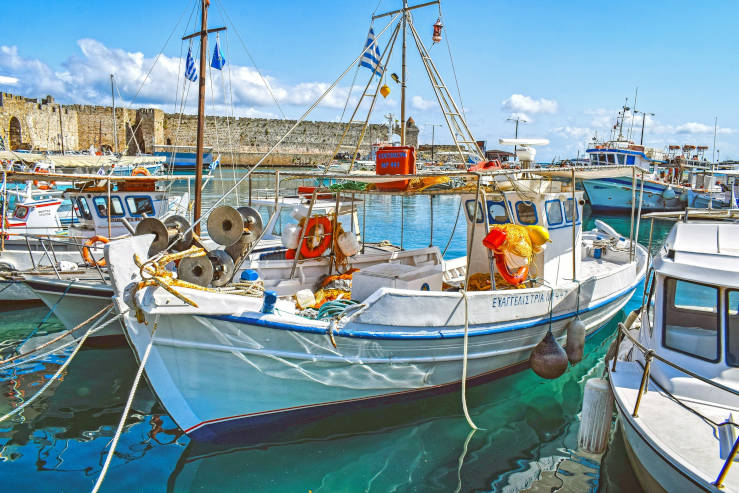 Along the road leading to Mandraki Harbour, you will today find important buildings such as the Government House, the National Theatre, the City Hall, and the Archbishop’s Residence. 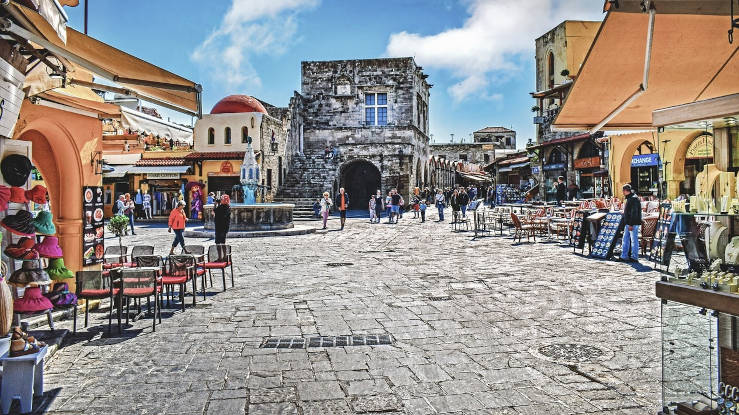 Another outstanding construction, erected much later in history, is the medieval Citadel of Rhodes which is one of the most impressive and best preserved citadels in Europe. Moreover, it is today the oldest inhabited medieval town! Establishing their headquarters in Rhodes, the Knights Hospitaller erected this massive citadel, and it remained in their possession for two centuries to come. Since 1988 it is a UNESCO World Heritage Site. 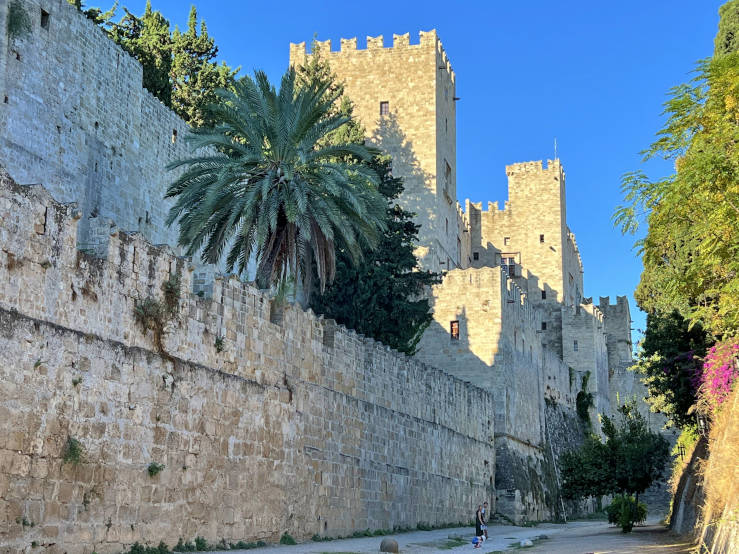 At the time Rhodes was a strategic part of both the trade routes between Constantinople and Alexandria.

After the Ottomans’ siege of the town in 1522, the Knights left Rhodes. Subsequently, the Ottomans converted some of the Knights’ churches into mosques. One of the new constructions was the Suleymaniye Mosque, precisely built in 1522. 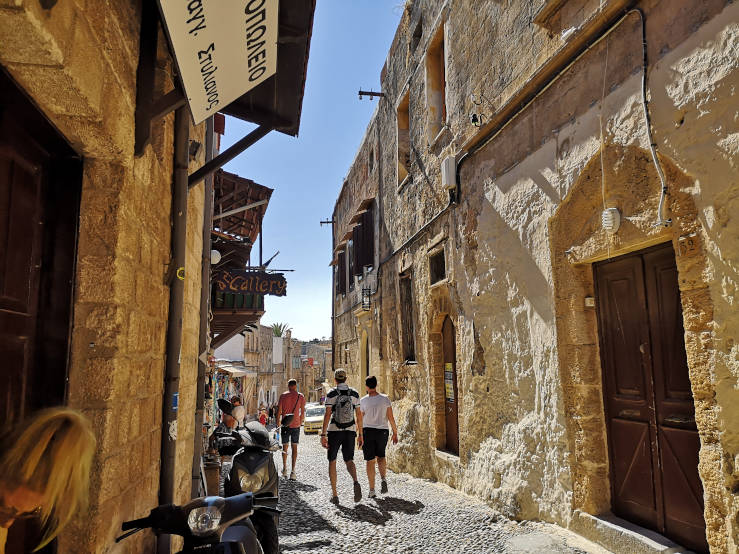 The impressive citadel has 11 gates as access points to the Old Town’s cobbled streets. Today the old town is a lovely blend of medieval architecture, mosques, hammans, as well as Byzantine and Gothic churches, including the Clock Tower, small shops, souvenir vendors, fountains, and much more, all contributing to the rich cultural heritage and multicultural atmosphere around the alleys connecting every part of the medieval area. 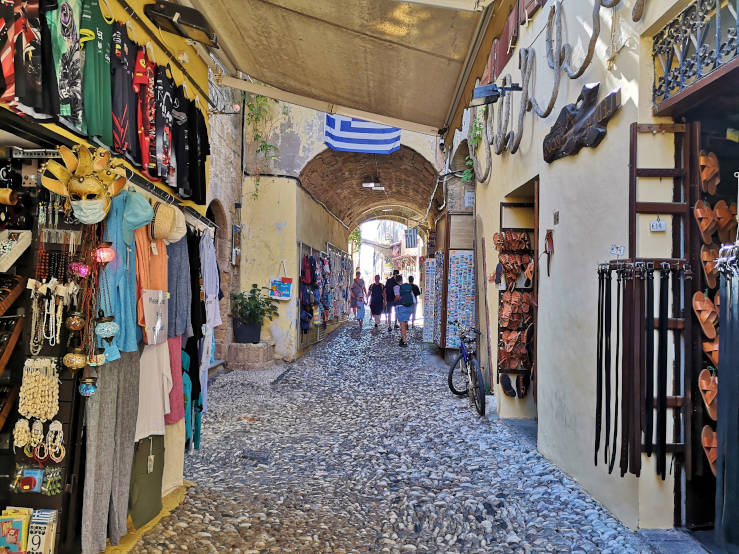 The main sight here is the Palace of the Grand Master of the Knights of Rhodes, a medieval castle in a Gothic style – the citadel of the Knights Hospitaller. In the 1940s the palace was influenced by Italian architects. The towers appear strikingly well preserved from the outside. The renowned Street of the Knights, restored as in the Middle Ages, leads right up to the palace! 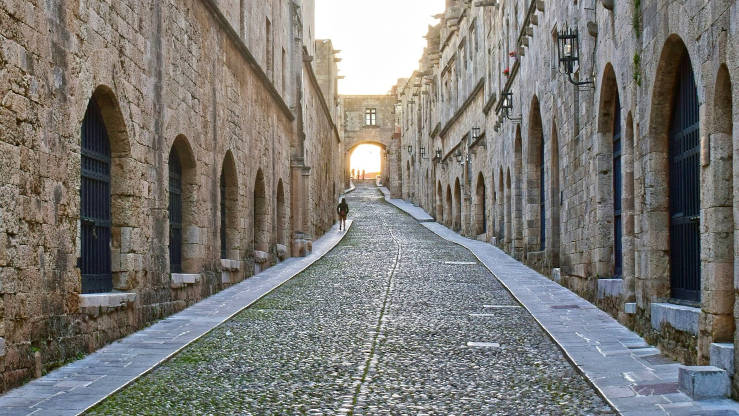 Inside the Great Hospital of the Knights, you will find the Archaeological Museum with archaeological finds, including mosaic paintings, from the city of Rhodes.

Unlike many other acropolises, the Acropolis of Rhodes has no walls surrounding the ancient constructions. It is located southwest of the current city of Rhodes and consists of the Temple of Athena Polias and Zeus Polieus, the Temple of Apollo, as well as a 210-metre long stadium, a gymnasium, and an odeon with seats for 800 spectators – all constructions predominantly built in a Hellenistic style. 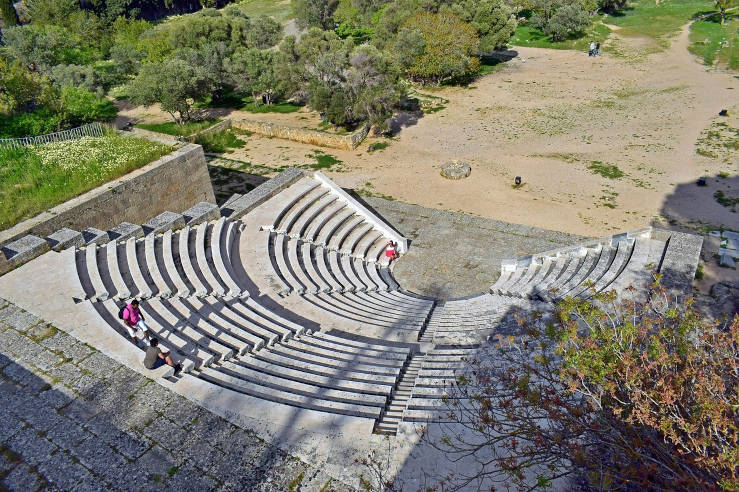 The Acropolis dates from the 5th century BC and was erected at the highest part of the ancient city as the ‘capital’ of Rhodes. At that time Rhodes had three settlements: the Doric cities Lindos, Kamiros and Ialysos.

The Temple of Athena was a Doric-columned temple with columns measuring 1.20m in diameter, bounded by a Stoa building. In the 5th or 6th century AD, a Christian church was added, and during the Middle Ages, a monastery as well.

The Doric-style Temple of Pythian Apollo was used as a landmark in Greece for ships arriving at Rhodes. 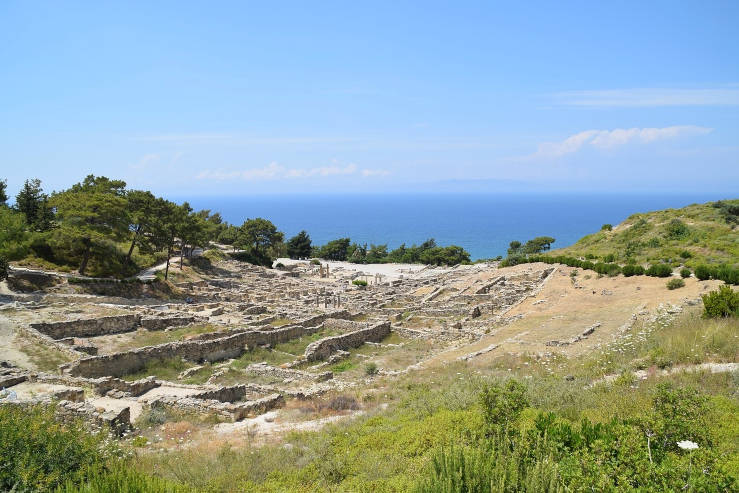 On Rhodes’ northwest coast one of the first Doric cities in Rhodes (from the 5th century BC ) can be found: The archaeological site of Ancient Kamiros dates from the Mycenaean era before Rhodes City was founded.

Together with Lindos and Ialysos, Kamiros was part of the ancient Rhodian city state with a flourishing agriculture. Moreover, it is known to be the first city in Rhodes to produce coins.

Despite having solid constructions, Kamiros was twice devastated by earthquakes (226 BC and 142 BC). The remnants today include the ancient Agora, the Temple of Athena Kameiras, the Archaic Cistern, and the Hellenistic Stoa. 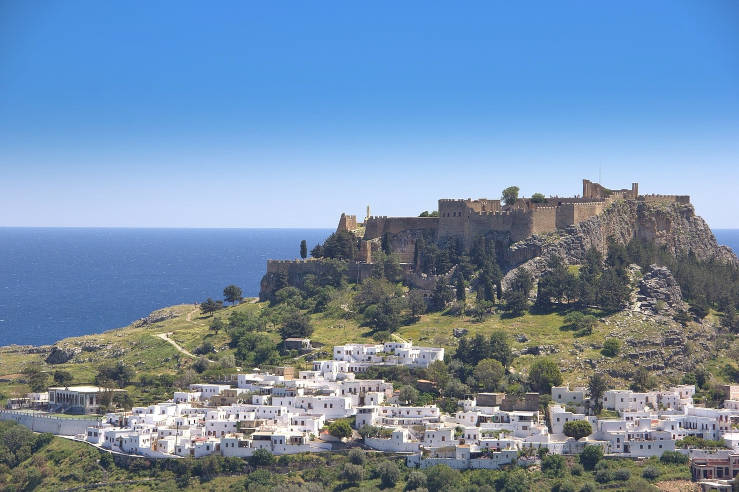 Another of the three original acropolises was the Acropolis of Lindos. The archaeological site is an impressive area that was founded by the Dorians in the 10th century BC – long before the foundation of the later city of Rhodes. 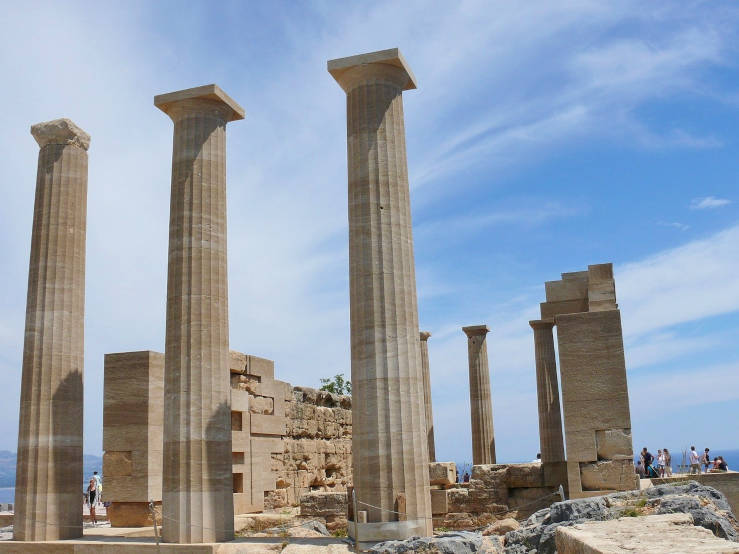 During the following centuries, Lindos became a major trading centre, which lasted until the city of Rhodes took over in the 5th century BC.

Lindos’s medieval walls were added by the Crusaders in the 14th century, reinforcing the earlier Byzantine defenses.

Read next: Make a Road Trip in the Peloponnese and Exploring Ancient Corinth and the Corinth Canal 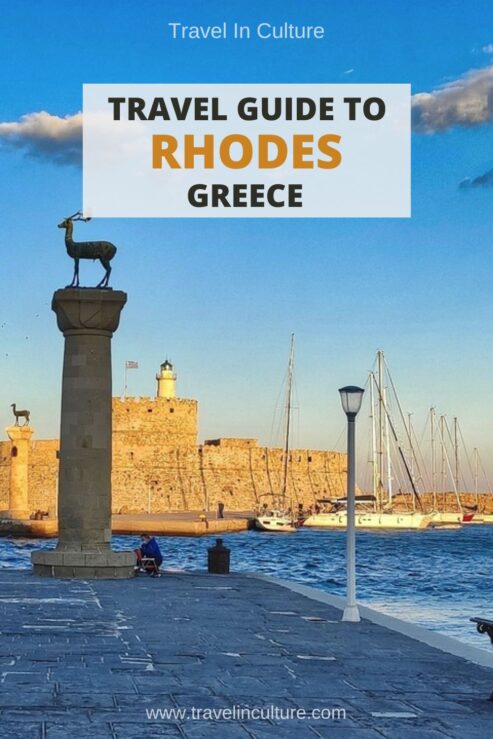