↓
DENMARK  The Danish island Ærø (Aero) is with the charming towns Ærøskøbing (Aeroskobing) and Marstal, as well as its long and interesting maritime history, the perfect island to visit when island hopping in the South Funen Archipelago in Denmark.
Ainnelise Niyvold Liundbye
This page has affiliate links (if you purchase through our links, we get a small commission at no extra cost to you - thank you!), see our Privacy Policy & Disclaimer.
Ærø Island, Marstal & Ærøskøbing, Denmark

It is worthwhile to include Ærø (Aero) and Ærøskøbing (Aeroskobing) when you are going island hopping in the South Funen Archipelago in Denmark. Ærø is an enchanting island with scenic landscapes, rolling hills, iconic beach huts and small seducing towns full of history. Moreover, the climate is mild and Ærø is one of the locations in Denmark with the highest number of sunshine hours.

The iconic beach huts in Ærøskøbing | Photo: Travel In Culture

Actually the South Funen Archipelago offers a lot of awesome small islands to hop between, which in addition to Ærø count for example Tåsinge, Langeland, Als, Drejø, Strynø, Hjortø, Lyø, Avernakø and Skarø, just to mention a few. 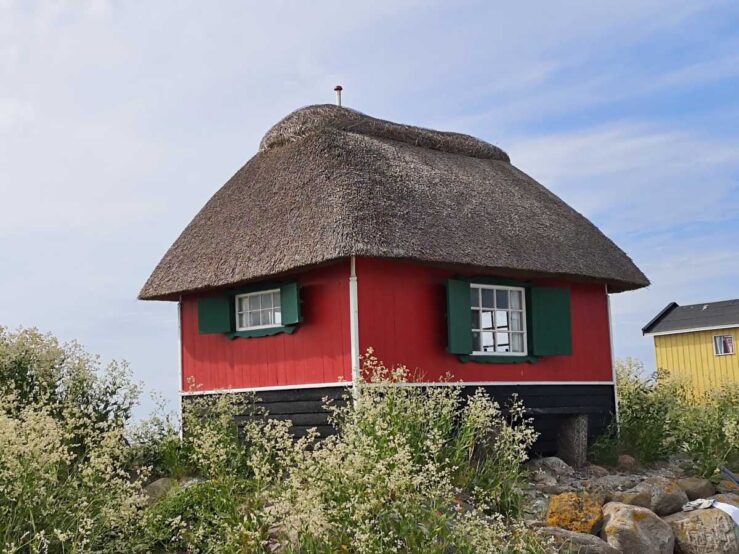 The most famous beach hut in Marstal, Aero | Photo: Travel In Culture

When visiting Ærø, most people arrive in picturesque Ærøskøbing. Several ferries serve the island and the vast majority of locals, day trippers, island hoppers and other visitors arrive here in Ærøskøbing from Svendborg in Funen. Other options are to arrive in Marstal (coming from Langeland) or Søby (coming from Faaborg or Als – maybe on the new climate-friendly electric ferry!). It is quite a scenic crossing, and you may even be lucky to spot a seal or a porpoise from the ferry boat!

Inspiration for your Denmark trip: Road trip in Southern Denmark and Blokart in Rømø and Møns Klint 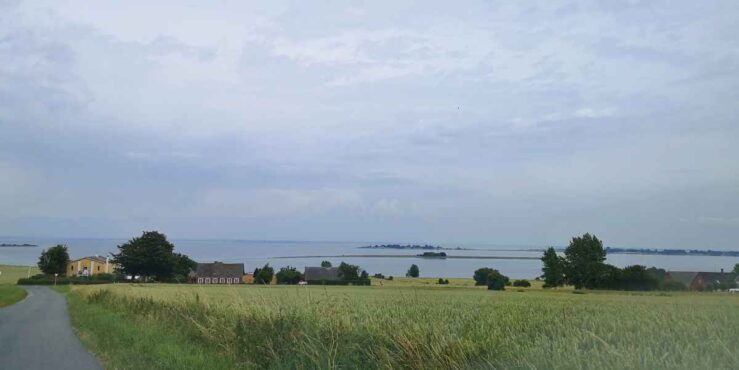 The landscape around the island is flat and scenic | Photo: Travel In Culture

Once arrived in Ærø, you can easily get around as the small Ærø towns are served by free island buses! Since distances are short and the island relatively flat, you can also opt to rent a bicycle to get around – many people do that! In this way you will be able to enjoy the scenic landscape and gorgeous sea views along the coast, as well as a diversified birdlife, the magnificent cliffs Voderup Klint, cute little island villages and much more. There is not a lot of traffic in Ærø since the island only has about 6.000 residents – and there are in general good cycling routes (150 km tracks), as well as walking trails. 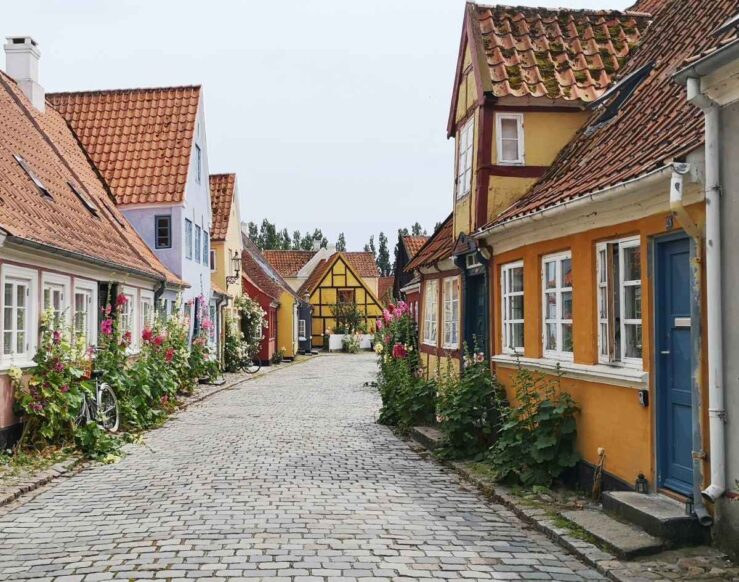 For a panoramic view of the island and the surrounding seascape, you can walk up the lighthouse Skjoldnæs Fyr (dating from 1881) situated at the northern corner of Ærø near Søby. Søby is the northernmost and Ærø’s third largest town, known for its large shipyard which is the workplace for many locals. 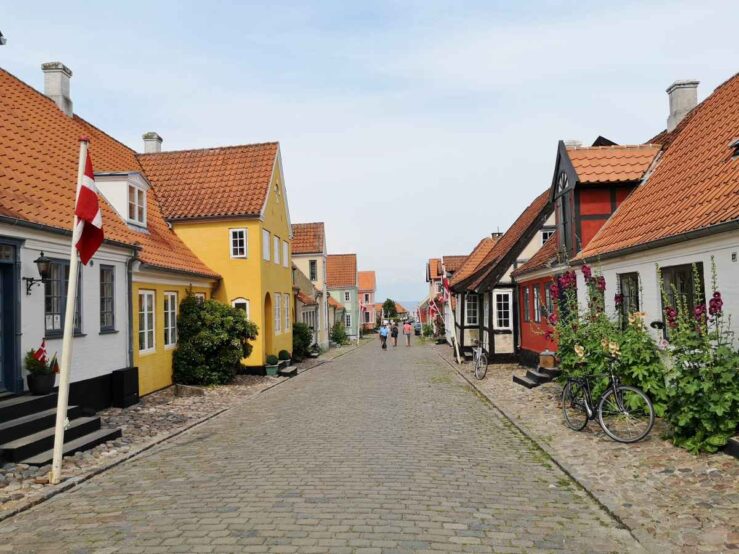 Ærøskøbing is one of the best preserved small Danish towns dating from the Middle Ages – still with rural cobbled streets and idyllic half-timbered houses adorned with hollyhocks – all contributing to the rather unique Ærø setting. In fact Ærøskøbing has at several occasions been awarded precisely for its quaint streets, characteristic houses and cultural heritage. 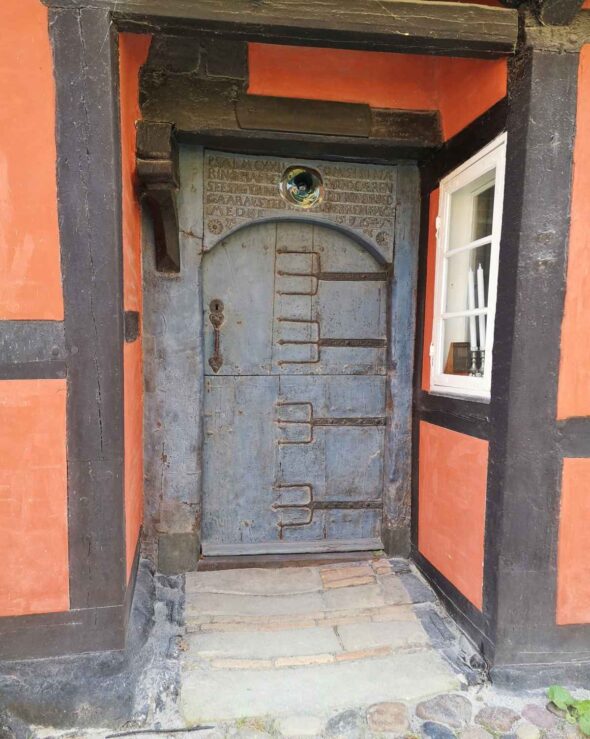 In particular, you will notice the crooked house façades, as well as carved and painted doors which are often real spectacular in style. Some of these date from the 1600’s!

Anyway, many of the original houses in Ærøskøbing went up in flames in a devastating fire in 1629! 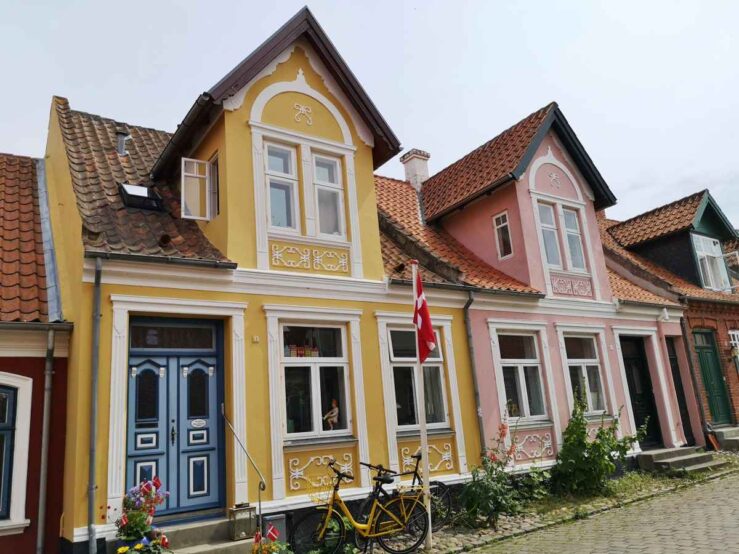 Ærø’s history is comprehensive. Until 1864 Ærø was part of the Danish Duchy of Schleswig, and King Christian IV‘s cousin, also named Christian, was during this era the Duke of Ærø (1622-1633)!

When strolling around you may catch sight of the island flag – Aero has its own flag in Denmark! It goes back to the time when Duke Christian was the governor here in the 17th century, and his colours, yellow and red, are each reflected in two of the stripes. The third stripe is green, symbolising the green island. 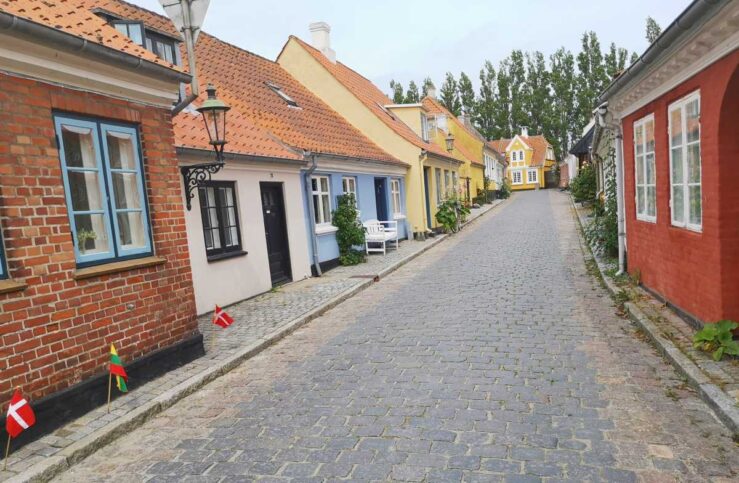 Here and there Ærø’s flag pops up in the picturesque streets | Photo: Travel In Culture 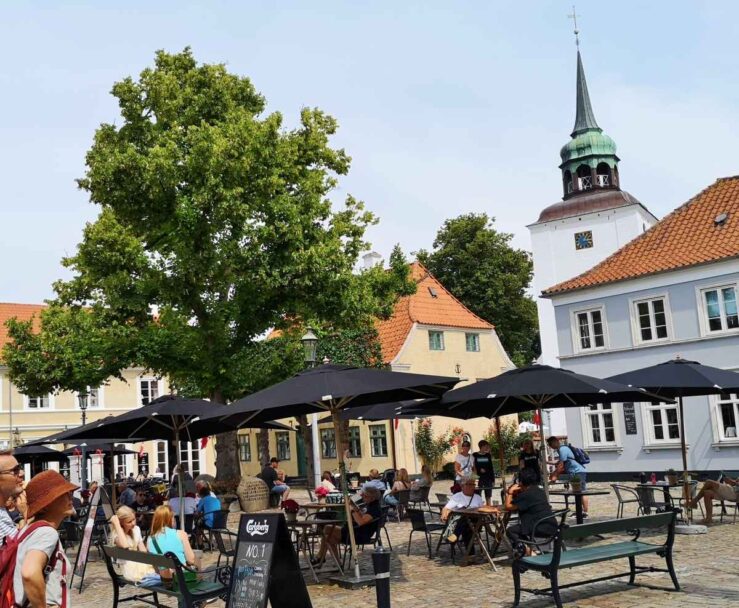 In the market square, Torvet, you will find the 19th-century Old Merchant’s House, today turned into a combination of a store and a restaurant where you for instance can enjoy genuine Danish smørrebrød. Just across the square you will locate Ærøskøbing Church, dating from 1758.

Speaking about Danish food specialities, don’t miss the fish smokehouse Ærøskøbing Røgeri where you can get all kinds of smoked fish specialities. 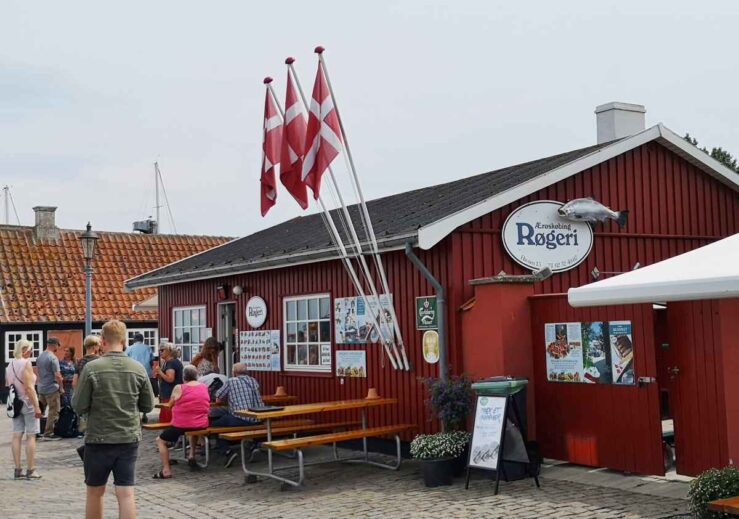 On the northwestern side of Ærøskøbing you will reach the famous beach Vesterstrand with its 71 iconic beach huts dotting the stretch of land, the oldest ones dating back to the 1920s. The huts have private owners who for preservation purposes will need to respect the strictest rules about the building style – basically changing nothing – and they are under no circumstances allowed to install any modern amenities! 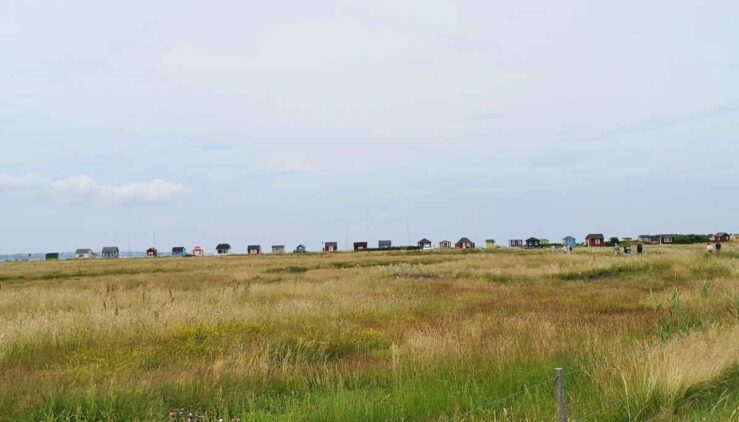 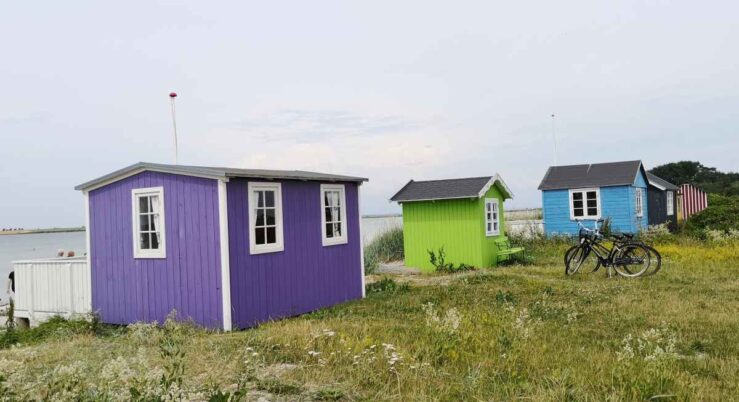 Ærø is also known for being a popular wedding location – and many couples, foreigners included, come here to get married in the special island surroundings and romantic atmosphere. The wedding can either take place in Ærøskøbing Townhall, Ærøskøbing Church, or romantically in the nature / by the sea. 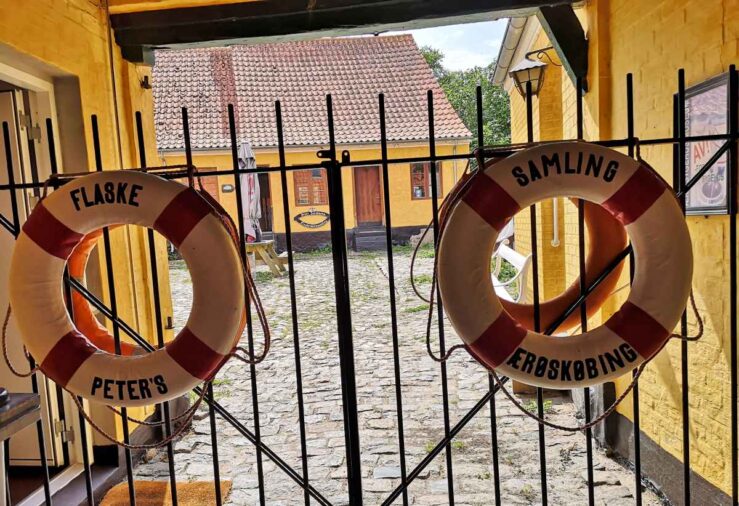 An interesting museum and curiosity in Ærøskøbing is Flaske-Peters Samling (Bottle-Peter’s Collection). The person Flaske-Peter (1873-1960) was named after his occupation: building bottle ships. He managed to build over 1700 of those, and a number of them are on display in the museum which actually holds the oldest collection of bottle ships in the world! 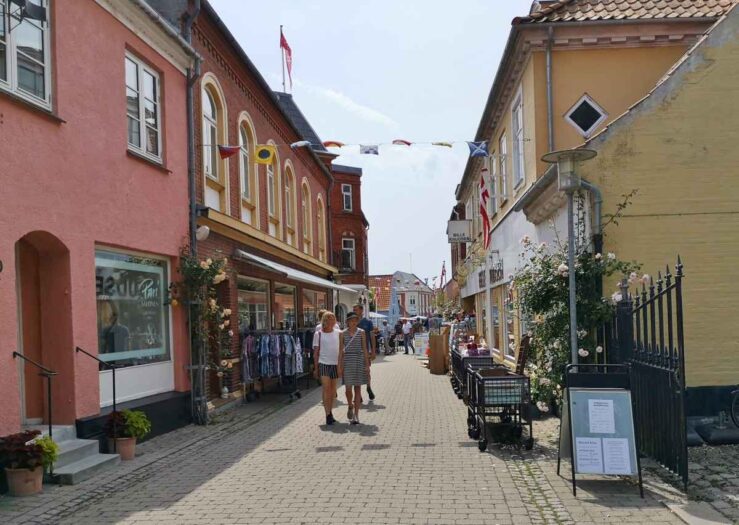 Marstal, Ærø’s largest town, is a small port town, rich in maritime history and thus with a main role in Denmark as a seafaring nation. For centuries shipping has been the core industry here – which doesn’t really come as a surprise when you look around. Dockyards and shipping companies constitute a considerable part of the harbour area, and the necessary equipment for the maritime vessels is clearly visible along the waterfront. 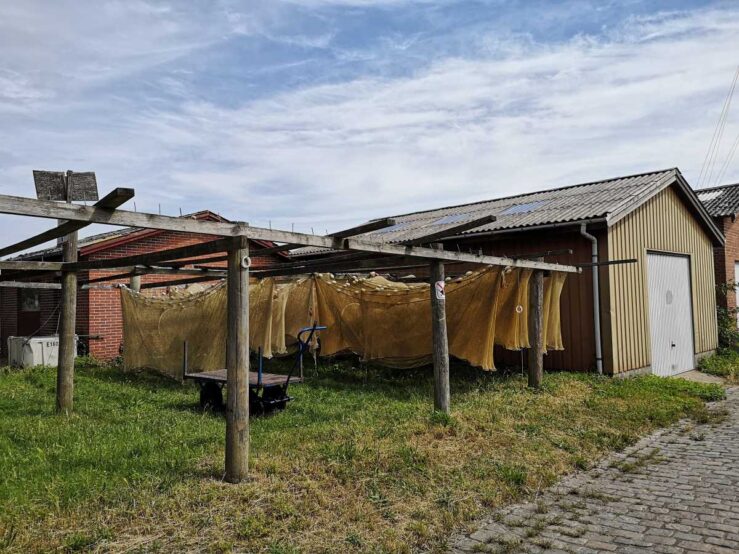 Moreover, Marstal Maritime Academy still exists (since 1861), the traditional school for future navigators who are trained for the Danish merchant fleet. A few years ago, it was just about to be closed down, but persevering protests from the inhabitants prevented this from happening. 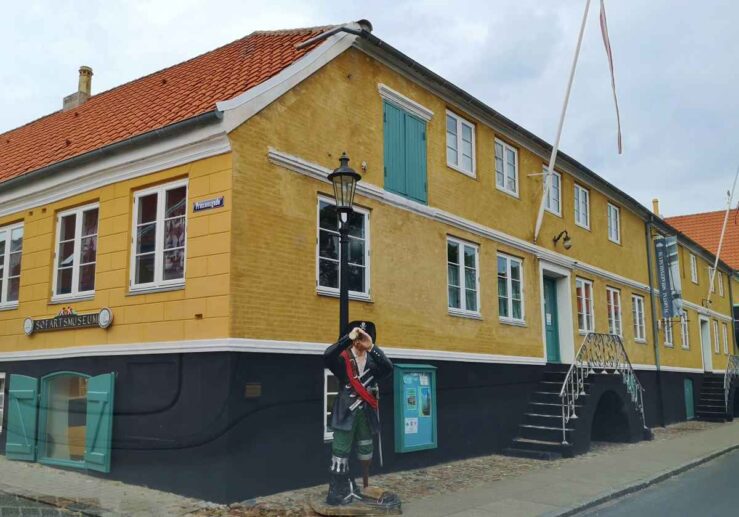 To get a feel for the maritime past you can visit Marstal Maritime Museum, quite a landmark of Marstal. It contains a collection of 250 ship models and describes the sailors’ history from the olden days until today. A wealth of items from all over the world are on display: navigation equipment, old costumes, bottle ships and other curious items – besides the galley of the Newfoundland trader BONAVISTA and a wheelhouse. 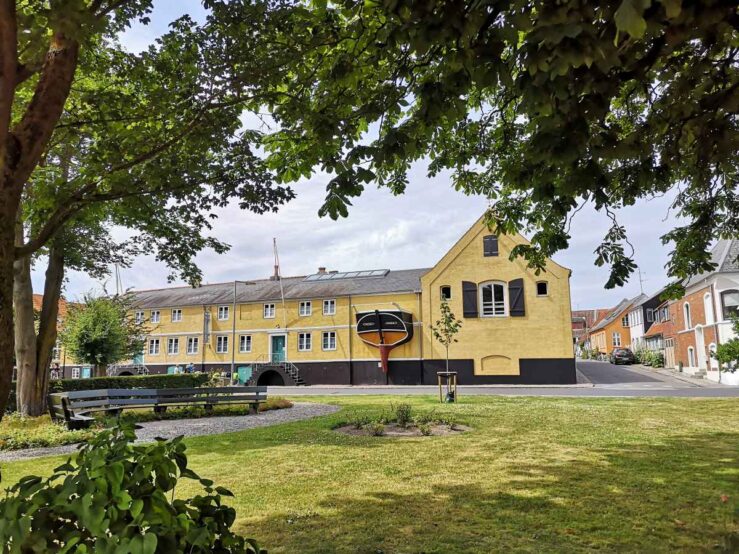 Another interesting place at Marstal Harbour is Eriksens Plads (Eriksen’s Square), named after Eriksen’s Shipyard. At this site wooden sailing ships were built in one of the numerous shipyards in Marstal. At least a dozen shipyards were erected here in Marstal’s martime heyday. One of those was precisely Eriksen’s Shipyard which launched their wooden ships from here to all parts of the world.

Today, you may sometimes see restoration work on the ships being done around Eriksens Plads. Walking around you can with a bit of luck get the chance to observe how ships are being restored, or how later boat engines work, in one of the workshops linked to the museum activities. 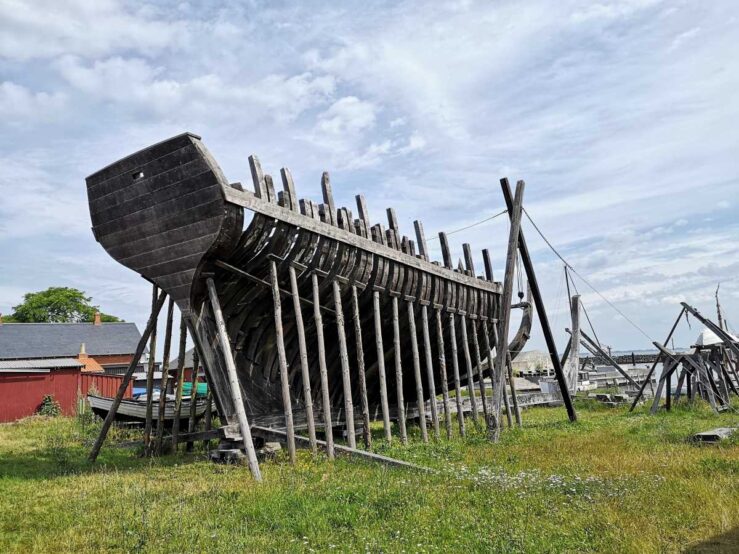 The schooner BONAVISTA and the coaster SAMKA still lie in Marstal Harbour. There is for example an ongoing restoration project of BONAVISTA.

Besides this, Marstal is also a charming small island town with a dynamic local life, a lot of cultural activities going on, small craft shops, intriguing boutiques and a traditional church, dating from 1738, with 48 unique bells ringing several times a day. 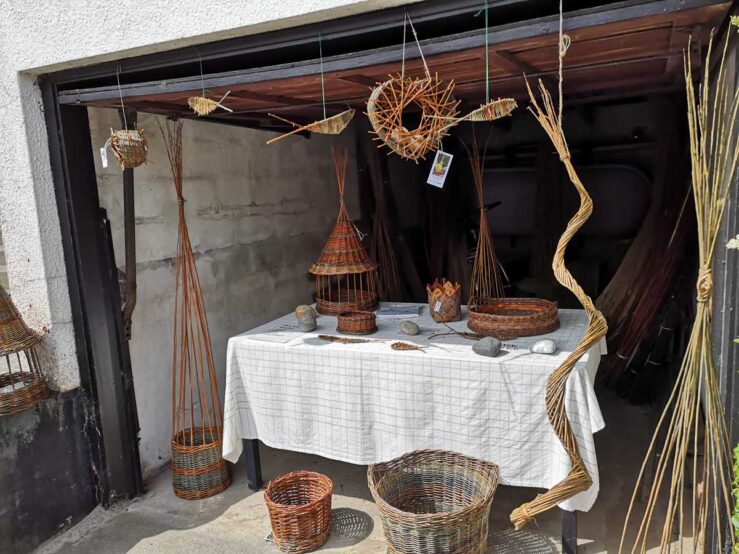 Look out for the small craft shops in the streets of Marstal | Photo: Travel In Culture

You will love the narrow and winding cobbled alleys, picturesquely flanked by roses, hollyhocks and half-timbered houses. In summer the charming setting is real picture-postcard! 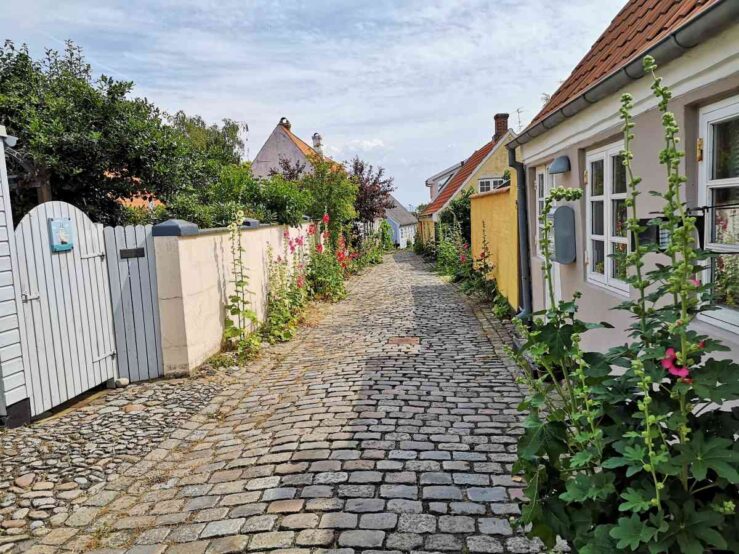 The famous Eriks Hale is a strip of land reaching out into the sea with the finest beach and 19 lovely colourful beach huts which are another landmark here. 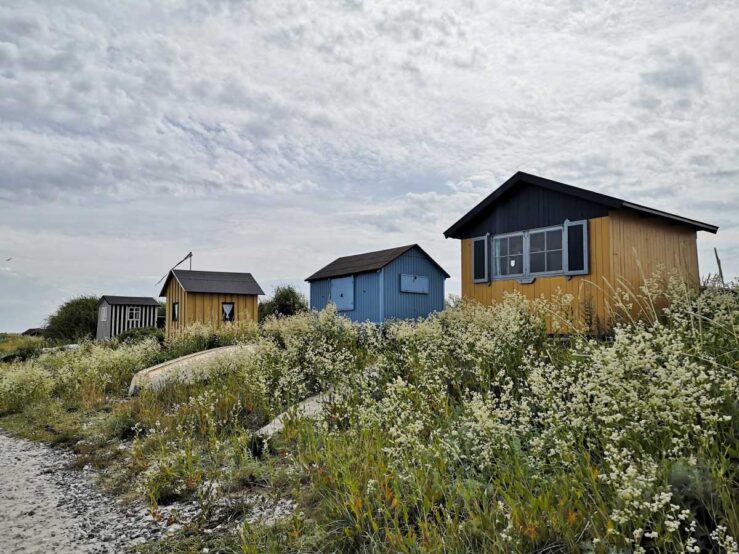 Marstal is also known for the author Carsten Jensen’s literary tale “We, the Drowned”, describing life and the destinies in the island town from the mid-nineteenth century onwards – where the men as a rule without many exceptions set sail and went to sea – and their wives were left behind in Ærø.

Would you like to get inspiration for 3 days in Copenhagen? Then read Copenhagen 3-Day Itinerary – or maybe discover 9 top sites in Aalborg on foot? 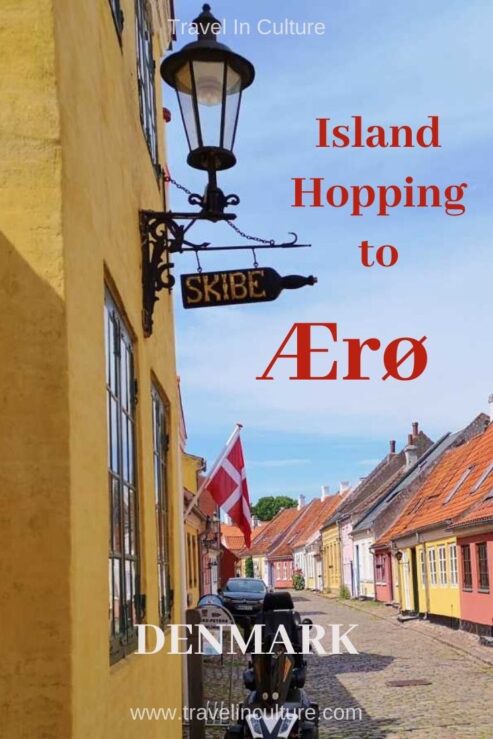 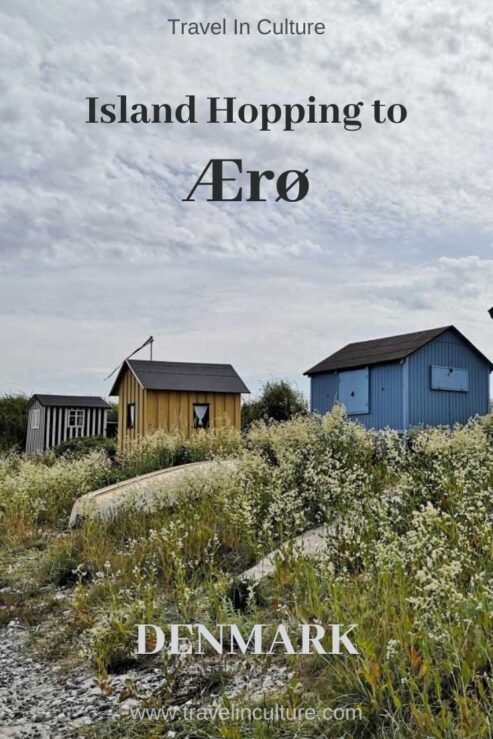