↓
GREECE  Ancient Corinth in Greece is today an archaeological site that provides fascinating information about the history and culture of classical Greece. The site is located close to the Corinth Canal, which is a masterpiece of a canal with nearly vertical walls at its narrowest stretch.
Ainnelise Niyvold Liundbye
This page has affiliate links (if you purchase through our links, we get a small commission at no extra cost to you - thank you!), see our Privacy Policy & Disclaimer.
Table of Contents

-> Where to stay at Corinth?

The Peloponnese peninsula, where Ancient Corinth is located, is connected to mainland Greece by several bridges over the Corinth Canal which allow ships to pass from the Gulf of Corinth to the Saronic Gulf. The spectacular canal draws thousands of visitors to the Corinth region each year when they are visiting Greece and the Peloponnese.

Near the famous canal, an important archaeological site in Greece can be found: Ancient Corinth. Corinth is with its history stretching several millennia back in time in fact one of the oldest cities in Greece. Ancient Corinth began as a city with an extraordinarily rich culture and a strong political influence. The city was overlooked by the acropolis Acrocorinth, or Acrocorinthus, atop the mountain.

Where to Stay at Corinth/Loutraki
Advertisement
Pegasus Rooms accommodation in the heart of Ancient Corinth close to the archaeological site and only 1.8 km from the medieval castle of Acrocorinth. Some rooms feature a terrace or a balcony. Superb breakfast.

AGORA luxury BOUTIQUE HOTEL 3-star hotel with spacious and modern rooms set in Loutraki with Loutraki Beach within 200 metres. The hotel has a patio, a terrace and a restaurant – and offers a continental breakfast. Some hotel rooms feature a balcony with city views.

Approximately 80 kilometres west of Athens, you will find the remarkable ancient city state of Corinth, which can be traced from as early as the 8th century BC to its end in the late Roman Empire. The city, together with its upper city, the acropolis and citadel Acrocorinth, played an important role in Greece’s history. As Corinth existed over many centuries, various building styles were involved in the construction. Acrocorinth atop the mountain was built in an architectural blend of classical Mycenaean, Byzantine, as well as Medieval styles. The view from Acrocorinth is stunning – on a clear day it is possible to spot even the Acropolis in Athens! However, the hike up here is strenuous! 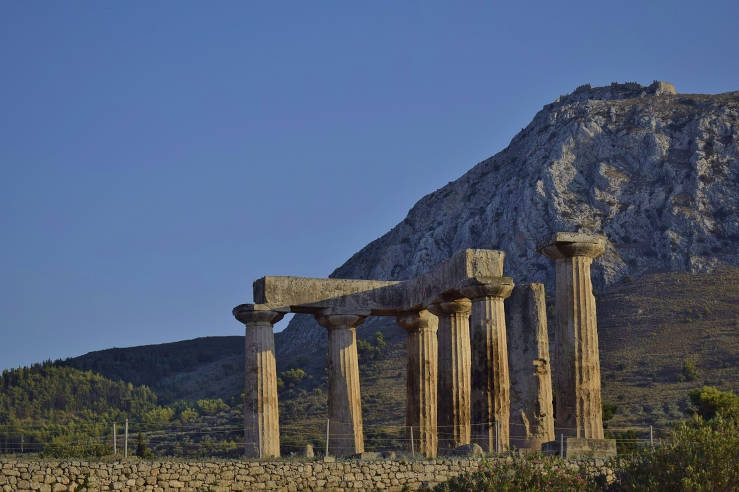 Ancient Corinth was at its height in the classical period, when its citizens experienced a flourishing trade with nearby ports such as Piraeus. This had a major economic impact on the society and creativity among the people. Corinthian works of art were considered to be some of the finest in Greece, and ancient Corinth reached a population of 90,000 at its peak in 400 BC.

In its distant past, Corinth was involved in many political conflicts in Greece. In 338 BC Acrocorinth was conquered by Macedonia and got a central role in the League of Corinth. This came to an end in 146 BC where Ancient Corinth was ravaged by the Roman general Lucius Mummius. A hundred years later, in 44 BC, Julius Caesar rebuilt Corinth as a Roman colony. 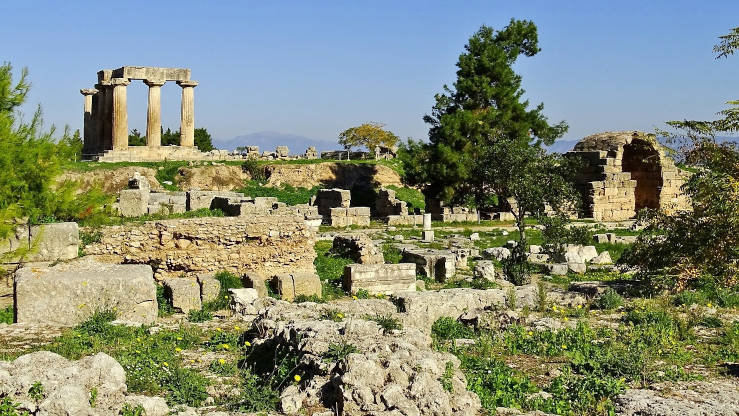 The ruins of Ancient Corinth are located a few kilometres from Acrocorinth. Today there are still remains from the Roman period in the ancient agora (marketplace). The ruins include a propylaeum, a stoa, several Doric columns originating from the Temple of Apollo, a theatre, public baths, pottery factories, an impressive triumphal arch, villas, and much more. It is also possible to trace the connection to the ancient ports Lechaeum and Cenchreae used by the citizens of Corinth.

Today, there is an Archaeological Museum of Ancient Corinth providing insight into Corinth’s interesting past and the excavations carried out since 1896. Finds such as pottery and ceramics, mosaic floors, and marble statues are on display.

The Corinth Canal cutting right through the landscape, separating the Peloponnese and mainland Greece, is a veritable architectural masterpiece. At the northwest end there is a submersible bridge crossing it, allowing smaller boats to pass. From all its bridges you will be able to enjoy panoramic views of the artificial canal. 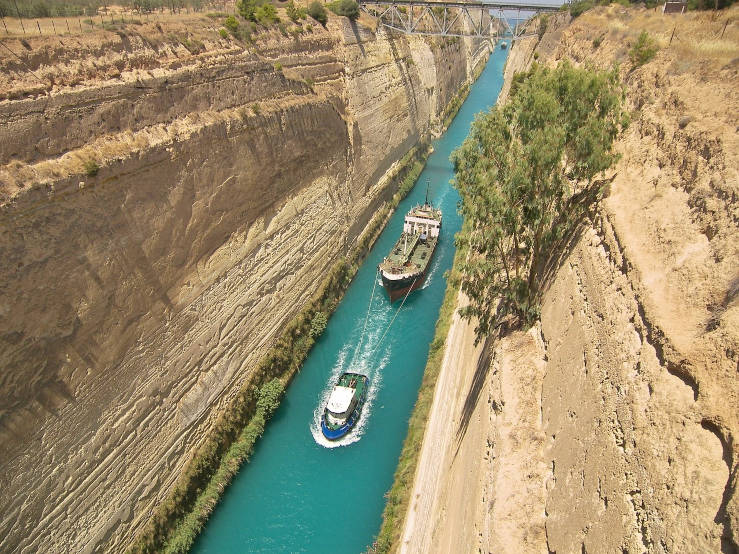 Already in ancient times, in the 1st century AD there were attempts to dig the Corinth Canal to create a waterway between two important seas. This first attempt failed.

However, already in the 7th century BC, the tyrant Periander had proposed to undertake a canal project, and also the Diadoch Demetrius Poliorcetes (336–283 BC) proposed it some hundred years later. In addition to those, the Roman dictator Julius Caesar, the Roman emperor Calligula, as well as the emperor Nero, all projected the canal to varying degrees, each at their time. Finally, the Greek philosopher and Roman senator Herodes Atticus also had brilliant ideas about such a project, but in the end he didn’t throw himself into it. 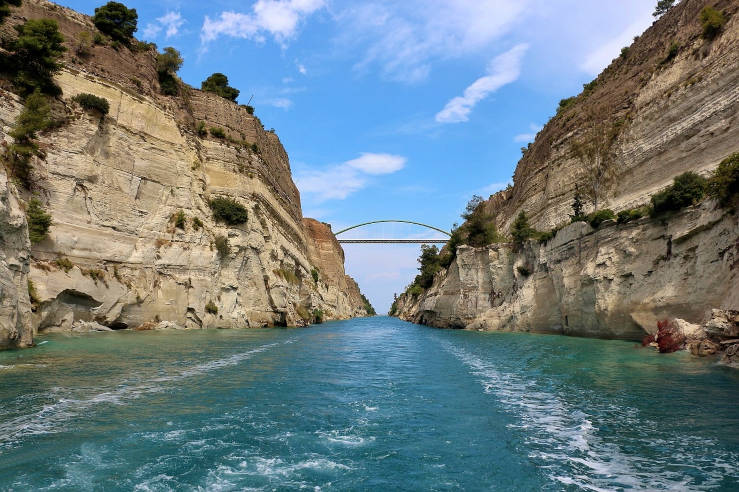 Nevertheless, many centuries later, in 1881, construction was again resumed. In 1870 the Prime Minister Thrasyvoulos Zaimis finally allowed the construction of a 6.3 km long Corinth Canal. The Société Internationale du Canal Maritime de Corinthe was in 1881 commissioned to dig the canal and operate it. Due to various problems, the canal was not completed until 1893, when it was finally passable for ships, although to a lesser extent than originally predicted. The canal required digging 80 metres vertically down with a width of 23 metres, to achieve the desired result! Probably due to its narrowness, it gained less popularity and found less use than expected.

After catastrophic landslides starting in November 2020, the Corinth Canal is these years undergoing restoration. This has been a severe blow to tourism in the region.

In 1858, a devastating earthquake occurred at Corinth. This resulted in the foundation of modern Corinth, or New Corinth, located a few kilometres northeast of Ancient Corinth. It is now Greece’s gateway to the Peloponnese. 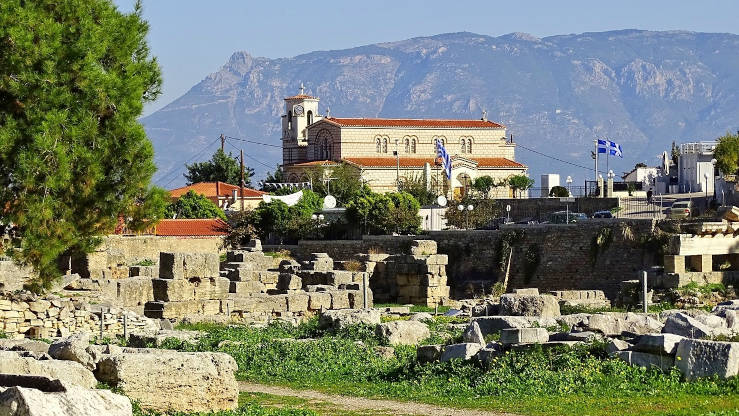 The Corinth region is today both an industrial hub with one of the largest oil refineries in Europe, production of ceramic tiles, marble, copper cables, salt and more, as well as a fertile area with fruit plantations, grapes, raisins, olive oil, and tobacco cultivation. Moreover, it is one of the two points of contact between mainland Greece and the Peloponnese, just like the bridge at Patras further west.

Corinth is also a vibrant city with a wide range of shops, cafés, restaurants, hotels, as well as good, clean beaches. The city features various cultural sights, such as the Historical and Folklore Museum of Corinth, numerous churches, the Statue of Alexander the Great & Diogenes, the Statue of Aphrodite, as well as the Pegasus Statue, and it is also the city of the Apostle Paul who wrote the Letters of Paul to the Corinthians (Epistles of St Paul the Apostle to the Corinthians). Corinth is an ideal place to stay if you want to explore Ancient Corinth and the history of the Corinth Canal. 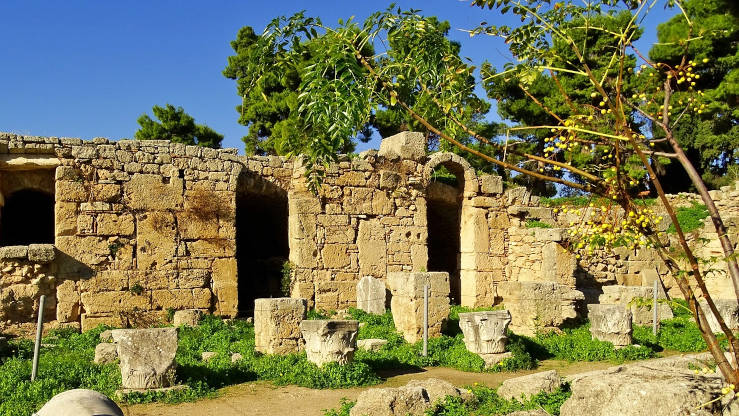 If you want to combine cultural sightseeing at Ancient Corinth with a beach holiday in Greece, Loutraki is an excellent option. It is a beach town located on the other side of the Corinth Canal within easy reach of the archaeological sites. Moreover, Loutraki is only 82 km from Athens! 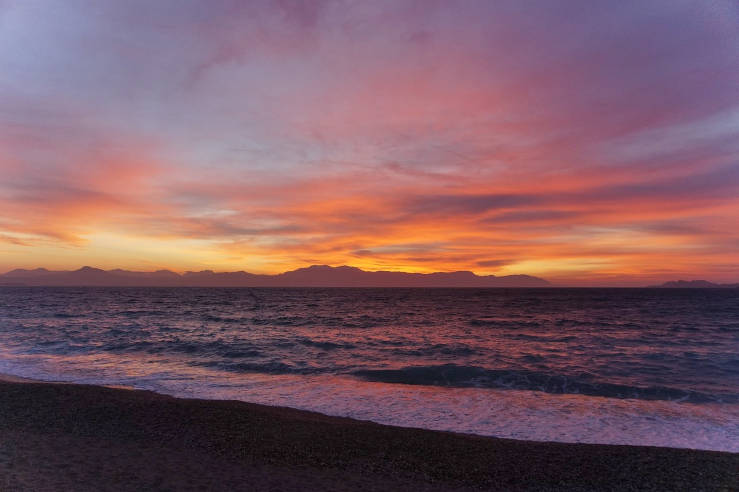 In addition to the beach, the seaside resort Loutraki features a thermal spa, waterfalls, mineral water, as well as a casino! There is a thriving nightlife and a wide range of restaurants and bars. For hiking enthusiasts, there are also good hiking opportunities in the area, and you can visit the Saint Patapios Monastery, a still active monastery for nuns. It dates back to the 12th century, although the current monastery is from 1952.

Read next: What are the Best Things to Do in Athens and Site of Colossus of Rhodes today 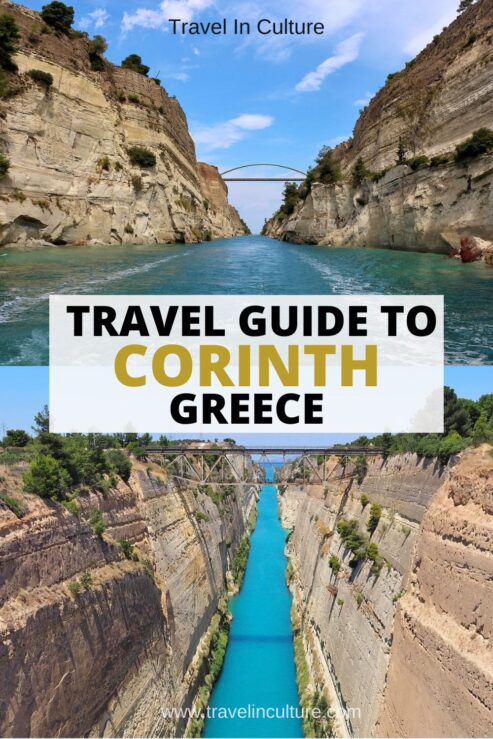