↓
AUSTRALIA  Tucked away in the Blue Mountains in Australia you will find an excellent example of traditional Aboriginal art. Aboriginal paintings represent the indigenous culture in Australia from the time before the European settlers arrived towards the end of the 1700s.
Ainnelise Niyvold Liundbye
This page has affiliate links (if you purchase through our links, we get a small commission at no extra cost to you - thank you!), see our Privacy Policy & Disclaimer.

Aboriginal communities have existed in Australia for thousands of years – from very long before the Europeans even thought about colonising the continent. The Aboriginal peoples inhabited many parts of Australia including the Sydney region and the Blue Mountains. However, with the European settlements, they were gradually pushed away from Sydney to places further away from the European colonists. 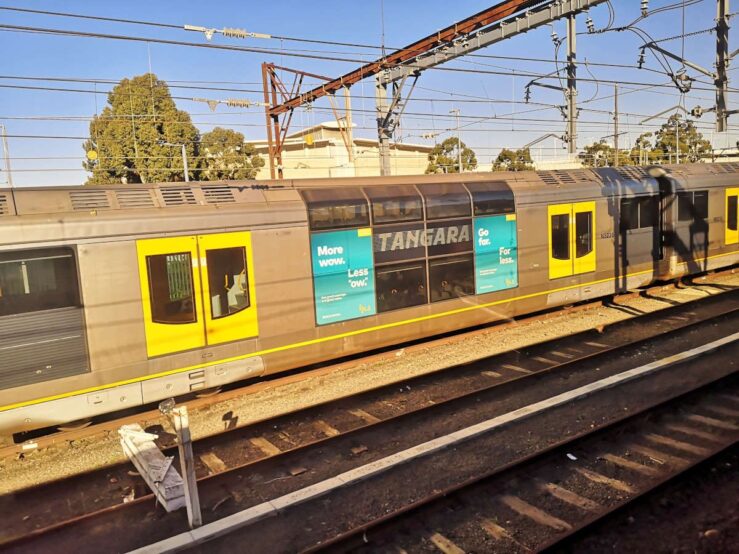 Nevertheless, the indigenous people survived in Australia – and still today you will find Aboriginals living for instance around Sydney in the Blue Mountains.

Where to stay in Sydney? Wake Up! Bondi Beach (budget) with a beachfront location, Novotel Sydney Darling Square (mid) in the heart of Sydney, Hyatt Regency Sydney (top) with amazing city or harbour views!

From Sydney it is easy to set out on a day trip into the Blue Mountains – either by car or by train. The train is maybe even preferable. It is in fact very convenient to catch a train from Sydney Central Station with a direct line to Glenbrook Station, located west of Sydney on the eastern fringe of the Blue Mountains. The fastest train ride is less than an hour. If you go on a Sunday, you may even benefit from the Opal card to pay just a few dollars for the entire trip (it is valid all day in Sydney and beyond – including the Blue Mountains).

The Blue Mountains can be characterised as a blend of soft green hills, abrupt rock formations, breathtaking valleys, sporadic outcrops and rough bushland. One of the top activities to do is to hike through the scenic landscape – for instance to the Red Hands Cave. This is actually the perfect thing to do since it combines a pleasant hike in beautiful surroundings in the Blue Mountains with exciting Aboriginal history and deeply fascinating Aboriginal cave rock art (Aboriginal art before European settlement) – unique to Australia!

Traces of the old Aboriginal culture can precisely be found inside the Blue Mountains National Park which hides a real masterpiece of Aboriginal rock art in the Red Hands Cave. It is located in the Glenbrook area and reachable by the loop Red Hands Cave walking track – an 8 km (5 miles) hike literally in the footsteps of the Aboriginals who supposedly used this same track for thousands of years! 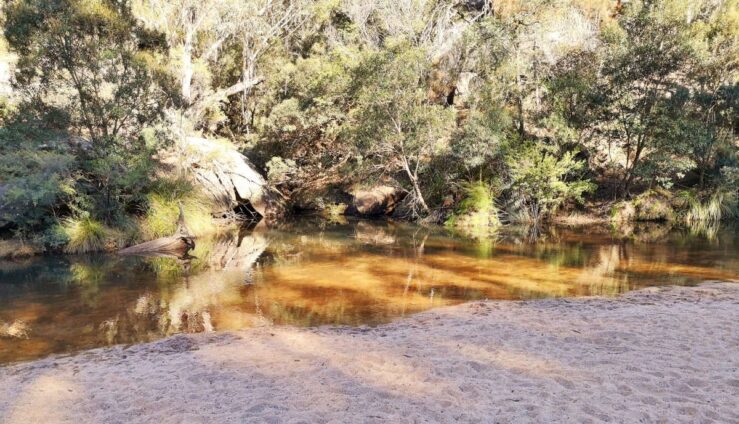 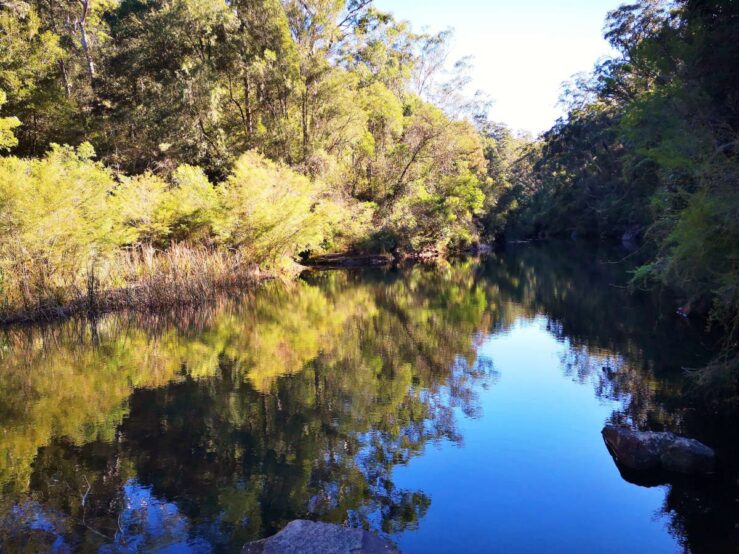 Allow at least 2 hours for this medium-difficulty track. It is notably free to enter the National Park. You’d better check out current information about the track before going. Consider bringing a picnic and your swimwear! On a warm summer day you may feel tempted to jump into the Blue Pool swimming hole or the child-friendly Jellybean Pool along the way!

From Glenbrook Station you will follow Bruce Road and walk along the rails in eastern direction. Cross the bridge over the rails, and shortly after you will arrive at the entrance of the Blue Mountains National Park where you will find the Red Hands Cave walking track, departing from near the car park. There is a small information building with a map and other relevant info. 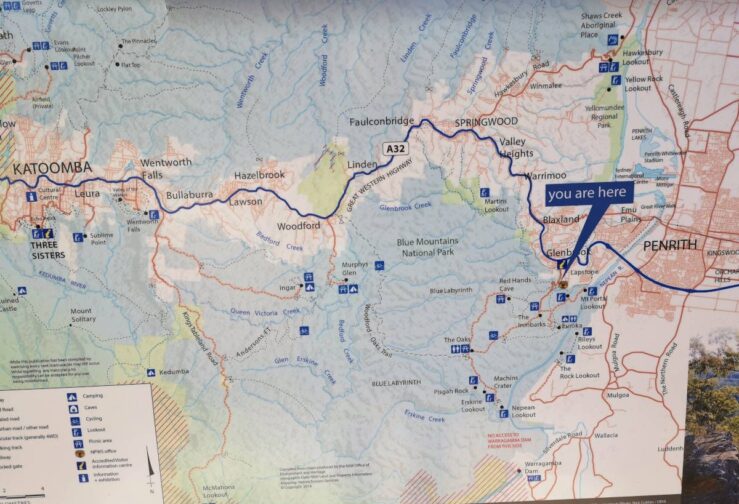 The Aboriginal peoples in Australia have a long and fascinating history since they have inhabited the vast continent for about 40,000 years! It is, however, not much we know about the people back in time – apart from their ability to depict their everyday motives and symbols on the massive rocks – what we today know as Aboriginal rock art! The motives could be anything from animals and plants to abstract figures linked to the spirits that the Aboriginals believed in. As tools they used bird feathers or brushes made out of human hairs – as well as a blowing technique.

Out of a large number of original tribes around the Sydney area, the Blue Mountains west of Sydney were in the past home to in particular three Aboriginal peoples, the Gundungurra, the Dharug (or Darug) and the Burra Burra tribes, each with their own traditions, customs and beliefs. 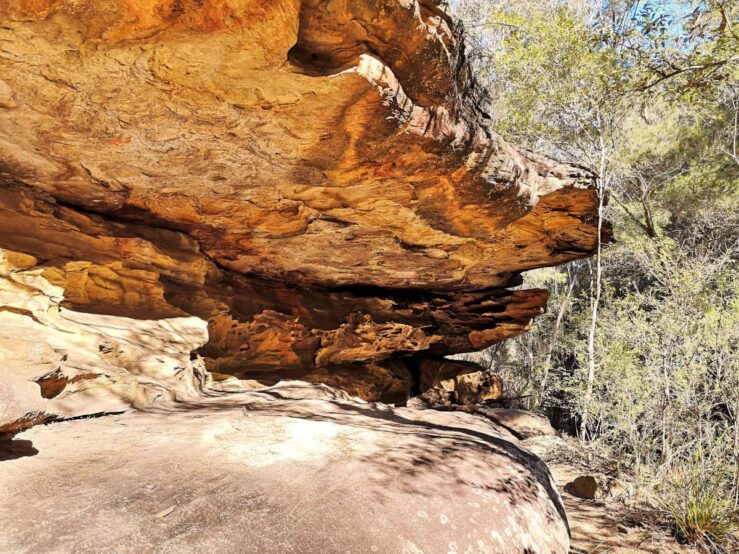 One of the fascinating sites with traces of the original people is the Red Hands Cave. It is believed that the paintings in the Red Hands Cave have been created between 500 and 1600 years ago. The indigenous Dharug people in Australia lived in clans here and presumably occupied the area around the Blue Mountains for thousands of years. It is estimated that the clans have had between 50 and 100 clan members each. The western inland Dharug people were skilled hunters and hunted large animals like kangaroos and emus.

Stunningly, the Aboriginal people made wondrously painted art on the rocks where they lived. The remarkable rock art in the Blue Mountains has ever since been ‘kept alive‘ and maintained by their descendants – and is today one of the unique proofs of their long existence – and, thus, important cultural heritage from native Australia. 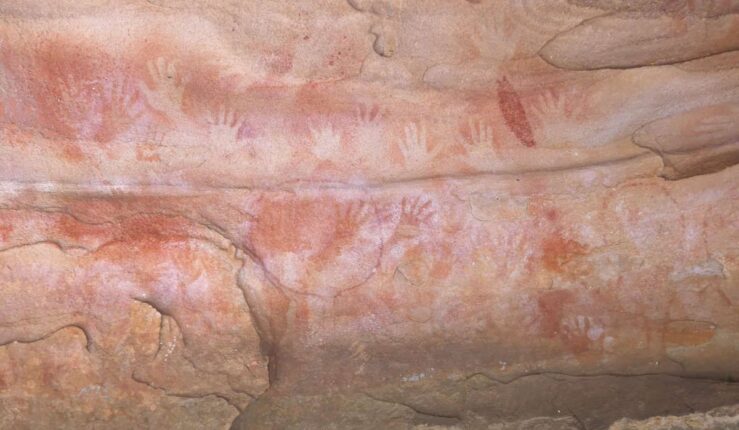 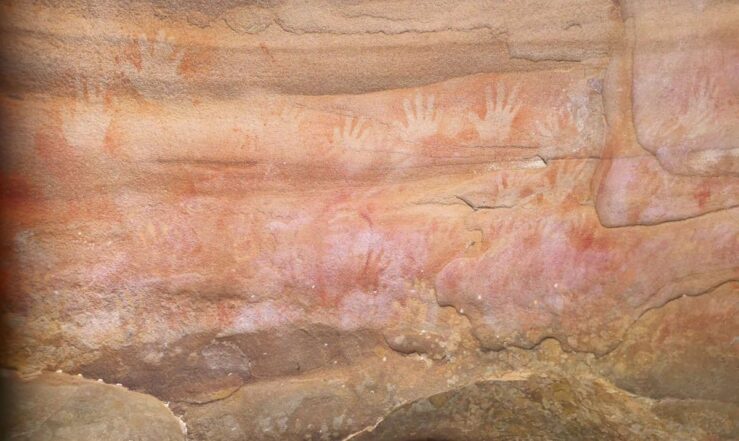 Each of the handprints on the wall in the red hand cave represents a distinct person once living here in the Blue Mountains in Australia! The painted hands are made with ochre from bright clay or rocks. It was seemingly crushed into powder on a grinding stone, before water was added.

Sometimes animal fat was mixed into this paste to make it more glue-like such that the colour paste could adhere better to the wall. A theory is that one of the techniques used to produce the vivid contours of the hands was to fill the mouth with the paste and blow it onto the wall where the hand was held – leaving the white shape of the hand behind. Other handprints show clear red-coloured hands on the rocks.

Hotels in Sydney
Do you need a hotel in Sydney? Check out hotel availability in Sydney here!