↓
CZECH REPUBLIC  One of the great ways to explore the spectacular landscape, impressive mountains and wild gorges in the Bohemian Switzerland National Park, situated in the northern Czech Republic, is on a hike starting out at Hřensko close to the Czech-German border.
Ainnelise Niyvold Liundbye
This page has affiliate links (if you purchase through our links, we get a small commission at no extra cost to you - thank you!), see our Privacy Policy & Disclaimer.
Table of Contents

Bohemian Switzerland National Park, also known as the Czech Switzerland Mountains, is the mountainous region situated in the very north of the Czech Republic not far from the city Decín. It is a rock national park consisting of the impressive Elbe Sandstone Mountains with forests climbing up the rocky hillsides, a beautiful gorge landscape, waterfalls, as well as green soft rolling hills scattered around the Bohemian Switzerland rocky landscape. This is the Czech counterpart to Saxon Switzerland located just on the other side of the Czech-German border.

One of the absolutely highlights in the national park are the Gorges of Kamenice created by the Kamenice River cutting through the sandstone mountains of Bohemian Switzerland.

Where to stay in Bohemian Switzerland Mountains
Advertisement
Penzion U Cempu Local stay at a charming inn with a bar/restaurant, terrace and garden in a small village close to hiking trails. There is free WiFi access and free parking on site.

Hotel Kotva The hotel is set in Hřensko in the heart of gorgeous mountains. The hotel offers breakfast and family rooms. 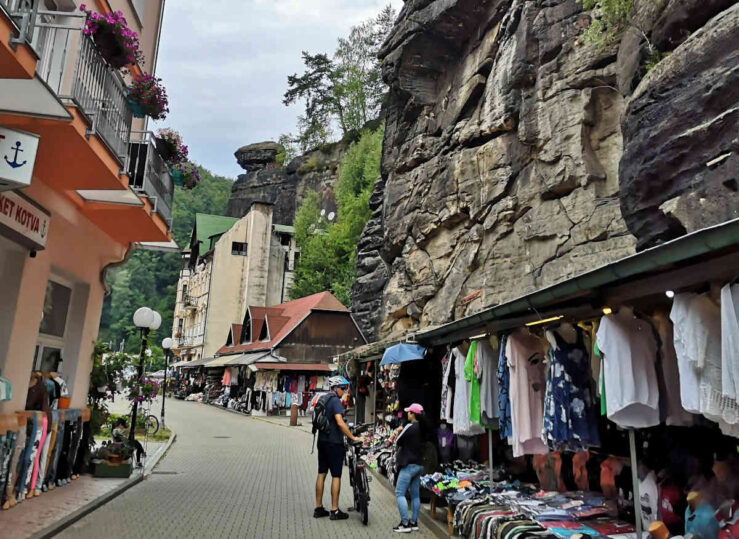 Hřensko at the German-Czech border is the gateway to the stunningly beautiful Bohemian Switzerland Mountains – a unique national park in the Czech Republic and in Europe, featuring both gorgeous rocky mountains, a lush river gorge, and the largest natural sandstone bridge in Europe. The access road to Hřensko from Decín follows the Elbe River which marks the border with Germany. Already in Hřensko you will notice the fascinating Elbe Sandstone Mountains rising right next to or even inside the town.

Hřensko is today the focal point of the Bohemian Switzerland National Park sights in the northern Czech Republic mountains. Moreover, it has become a popular town of border trade where the Germans throng to buy cheap Czech goods. 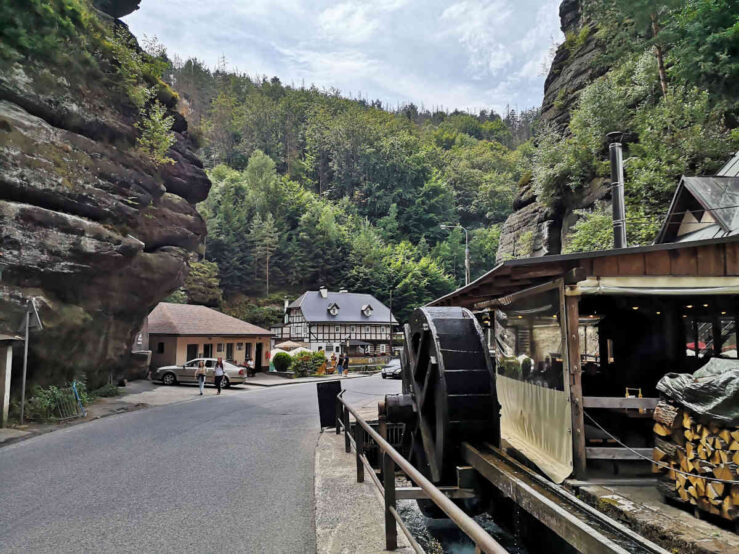 Seemingly, Hřensko was known as a named site already in 1475. Later the river and Hřensko were used for timber rafting and wood storing, and the first saw mill was established. From 1530 settlers began to arrive, and from that time both grain and salt were stockpiled in the local storages. In its trading heydays in the 18th and 19th century, Hřensko had no less than four saw mills (and one of these even served as a hospital during the cholera epidemic), and timber was transported on the river to places further away where it was used in naval shipyards. Likewise, there were as many as three mills that ground grain into flour for the grain trade. One of them is still preserved in Hřensko today.

Other industries that became significant in Hřensko counted mining and processing of sandstone. When the steamboats arrived at Hřensko, trading of wool and silk dyes also saw the light of day. 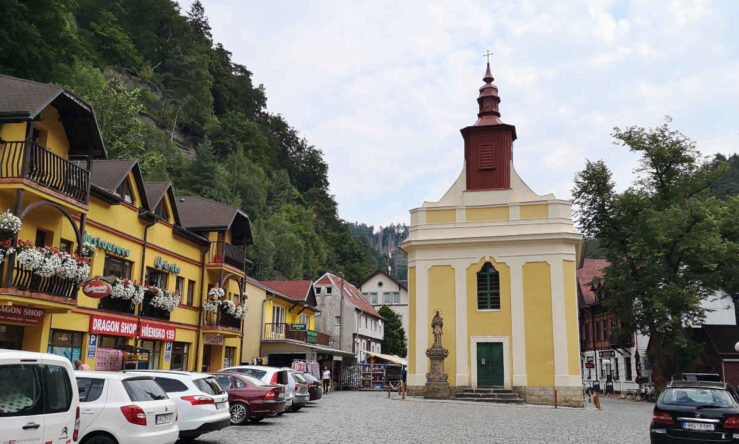 Another chapter of the trading history was the clandestine trade where products such as salt and tobacco were smuggled.

Hřensko is today a popular site to visit in the Bohemian Switzerland mountainous landscape – and having its interesting history in mind adds a little bit extra to the experience when visiting the surrounding mountains of scenic beauty including the spectacular gorges. 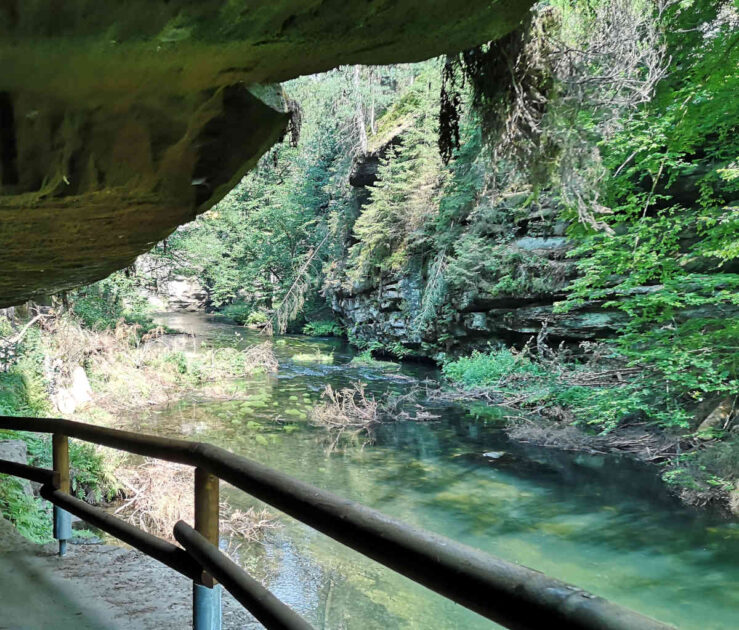 An 18 km hike will cover both the border town Hřensko, the remarkable canyon and the enormous sandstone gate atop the Bohemian mountains. Do note that the full hike can be a bit strenuous and requires a good physical condition.

There are two natural starting points of this round trip – either you park your car and begin your hike in Hřensko, or you drive to Mezní Louka and leave your car there before setting off on foot. It is the same itinerary – the only difference is which location you leave your car and start/end the hike. 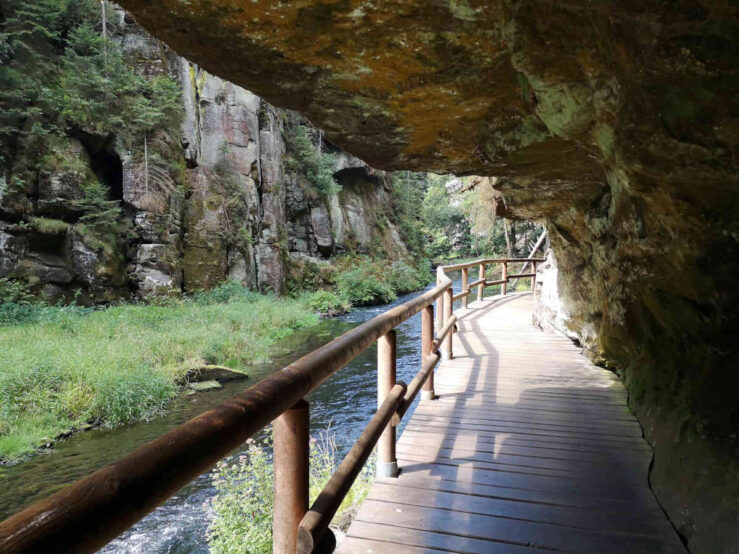 An advantage of beginning at Mezní Louka is that the car park is probably less busy than in the more touristy Hřensko. Moreover, there may be a shorter wait for the boats through the gorge (and maybe no wait at all!).

From Mezní Louka you will take the road and path past Mezná and walk down the stairway to the Kamenice Gorges (quite a few steps down!) and the Kamenice River. Once at the bottom you will have to make up your mind whether also to include a shorter boat ride in the Wild Gorge (Divoká Gorge), or ‘only’ do the flat-bottom boat trip through Edmund’s Gorge (also known as the Quiet or Lower Gorge). Edmund Gorge was opened to the public in 1890. 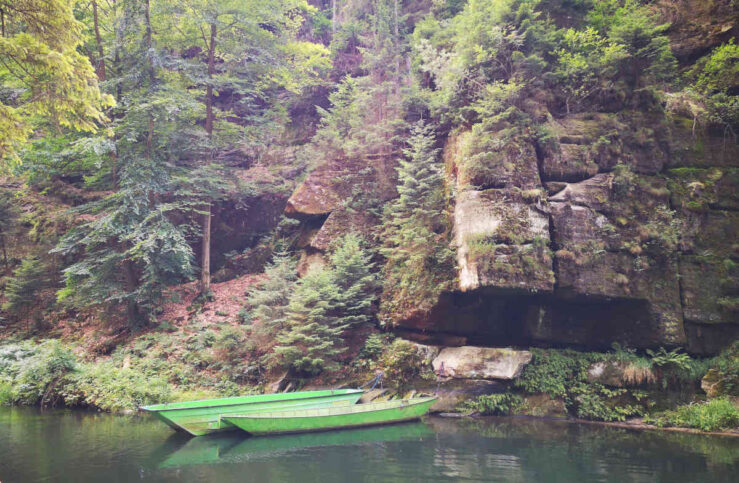 The local boat guide entertains along the way with stories such as smuggling anecdoctes, as well as interesting facts about the rock formations that you pass.

The boat takes you 960 metres through the part of the canyon that is the narrowest stretch of gorge with steep or even vertical rocky ‘walls’. The rest of the gorge is accessible via a footpath on either the left or right river bank, sometimes under overhanging rocks and sometimes through shorter tunnels. 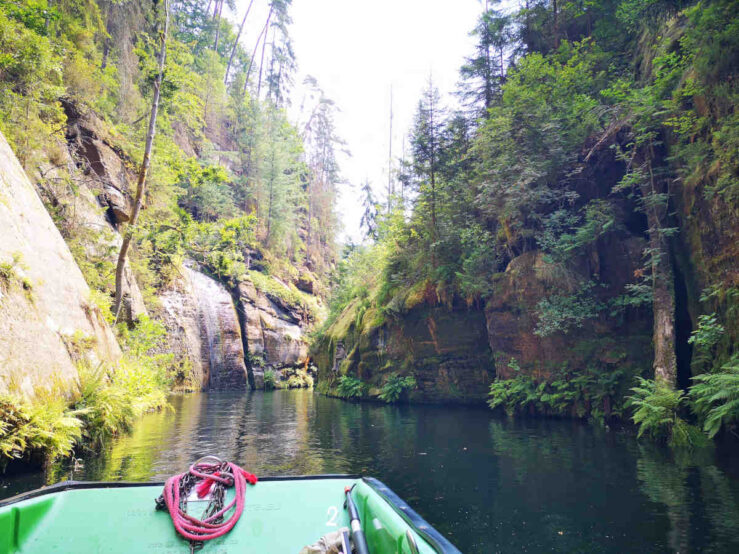 Inside the valley you will notice mountain plants normally unusual at this altitude – owing to the low temperatures and humid climate between the steep rocks in the Kamenice Gorges. 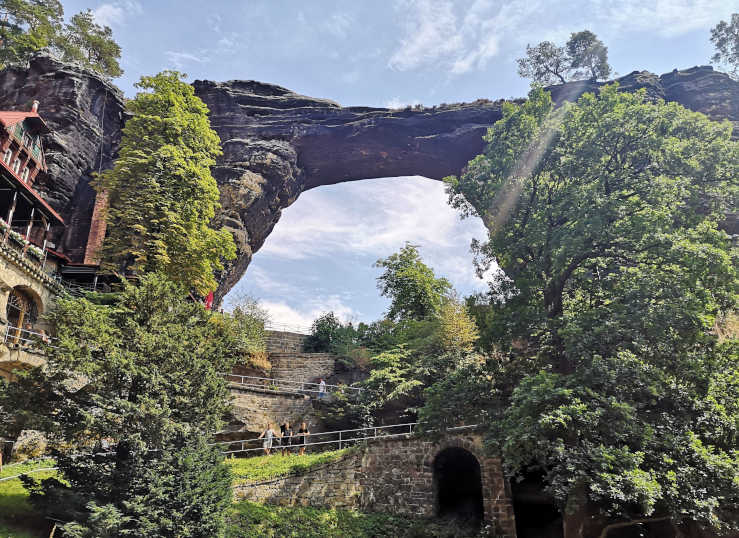 When leaving the gorge, you will find yourself in Hřensko where there are many options for having a meal in one of the restaurants and doing some souvenir shopping. 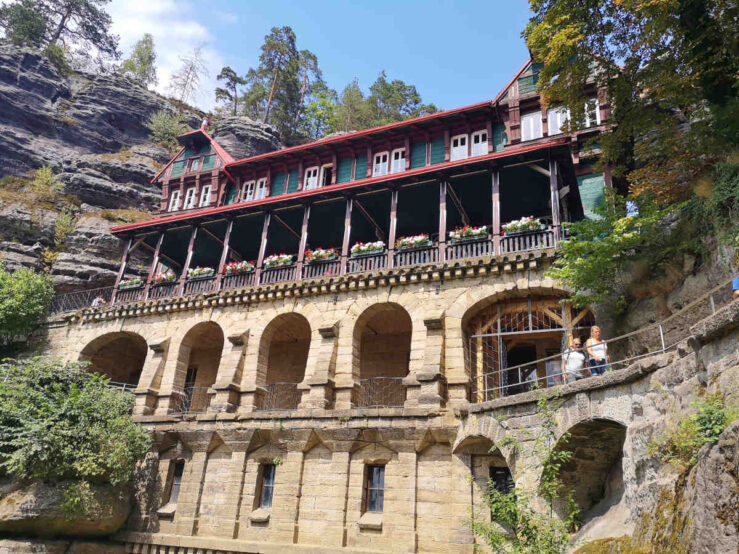 The hike then continues on the other side of the canyon up to the famous sandstone bridge. The sandstone arch is indeed an impressive monument with its span of 26.5 metres, as well as an inside height of 16 metres. In 1826, an inn was constructed next to it, and in 1881, Prince Edmund of Clary-Aldringen built the hotel Falcon’s Nest up here. Obviously, the large nearby gorge, Edmund’s Gorge, is also named after him. 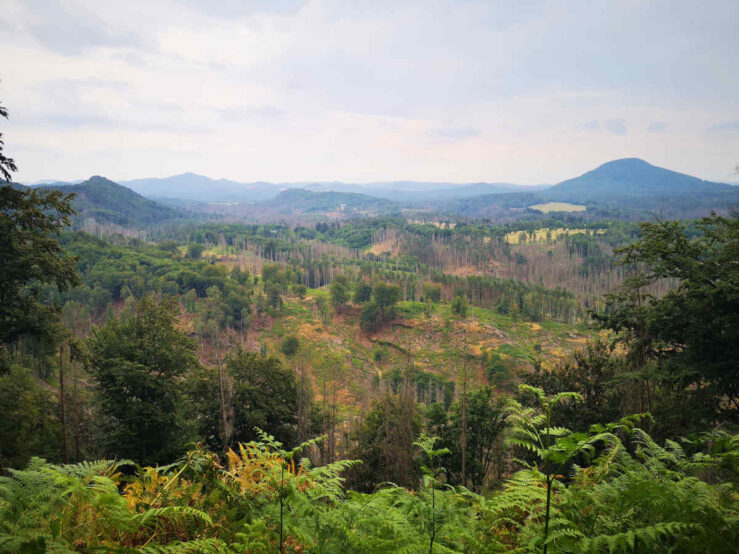 Finally, you will continue the route back to Mezní Louka, if this is where you parked your car. 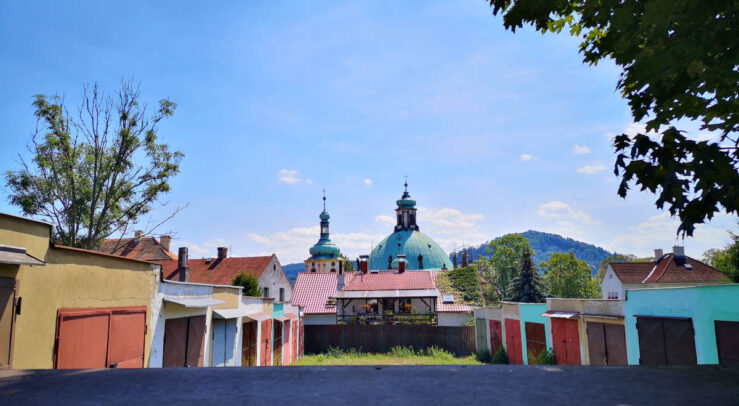 If you want to visit another small town on the border of the Bohemian Switzerland mountains in the Ústí nad Labem Region, Česká Kamenice a bit east of Děčín is a good option. Although small with only 5,000 inhabitants, it features some pretty, well-preserved buildings around the historic main square, Míru Square. The Renaissance fountain on the square dates from 1574, and it is surrounded by remarkable house façades in the architectural styles used in previous centuries. 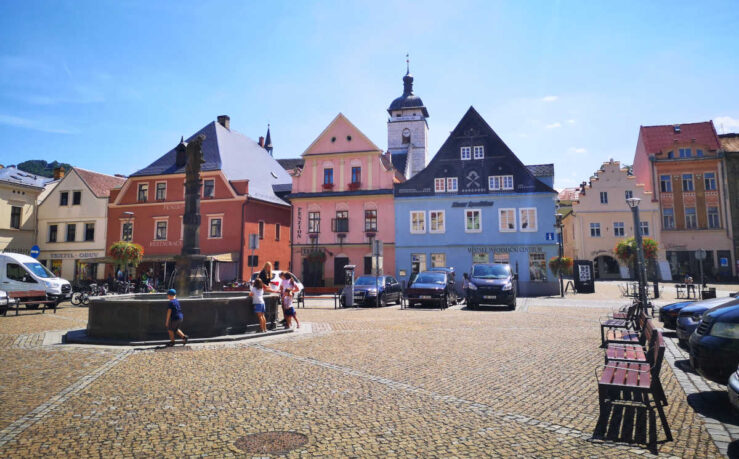 The town landmarks count the Church of Saint James the Great, the Pilgrimage Chapel of the Nativity of the Virgin Mary, and Salhausen Chateau. 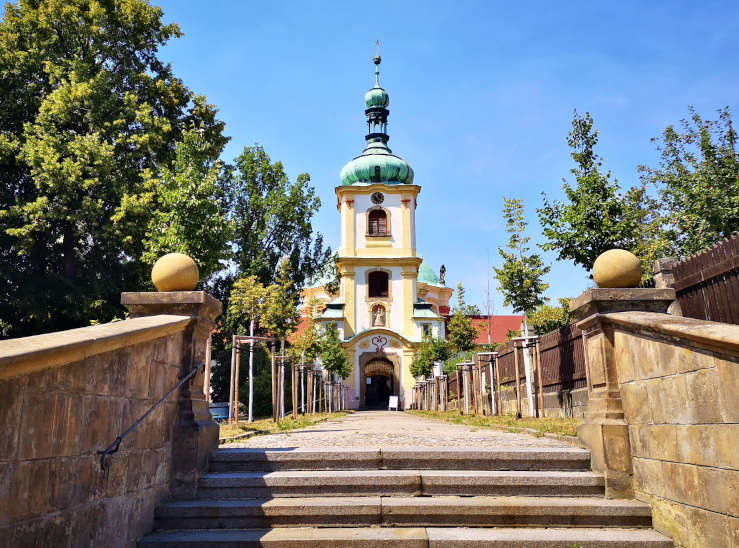 Česká Kamenice was founded at the crossroads of two well-known paths, the Bohemian Road and the Lusatian Road, probably in the 1270s, when settlers arrived in droves from Saxony to colonise the region. From the 1500s and onwards beautiful buildings were erected in the town centre in Renaissance, neoclassical and art nouveau styles. 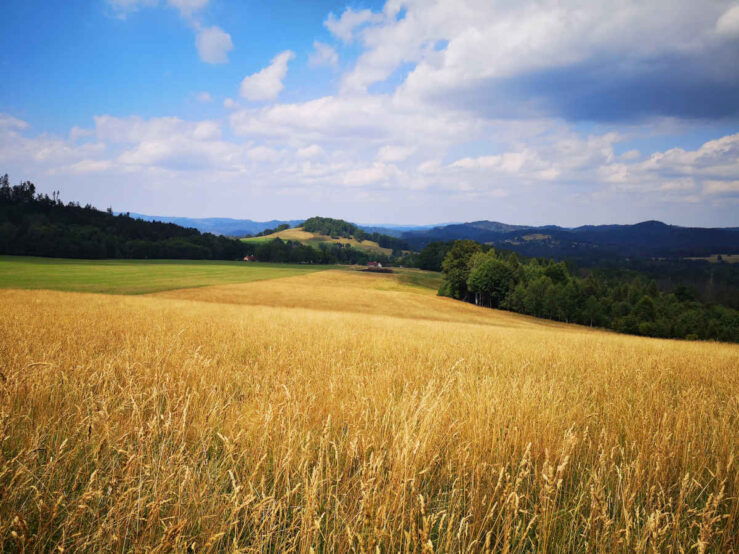 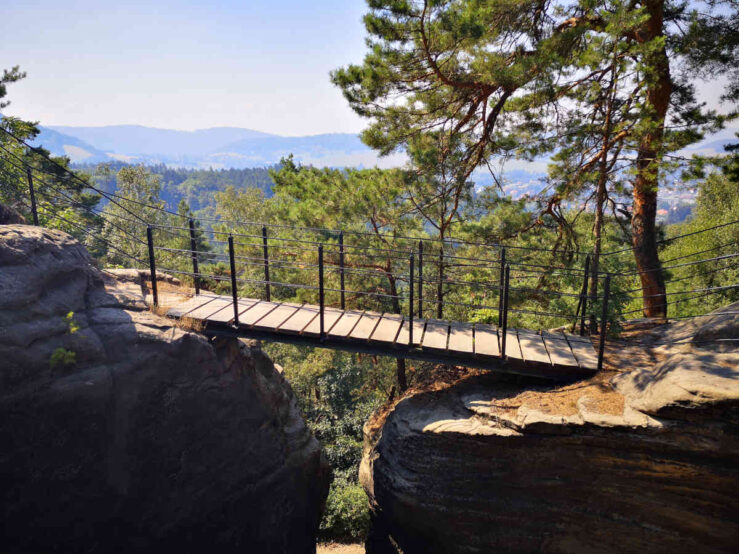 Around Česká Kamenice there is real spectacular landscape with remarkable rocky lookouts. On the highest peak Studenec (737 metres) you will find an iron observation tower from 1888. From here there are gorgeous views of the Bohemian Switzerland mountains and national park landscape. You can even see far across the border to Germany. 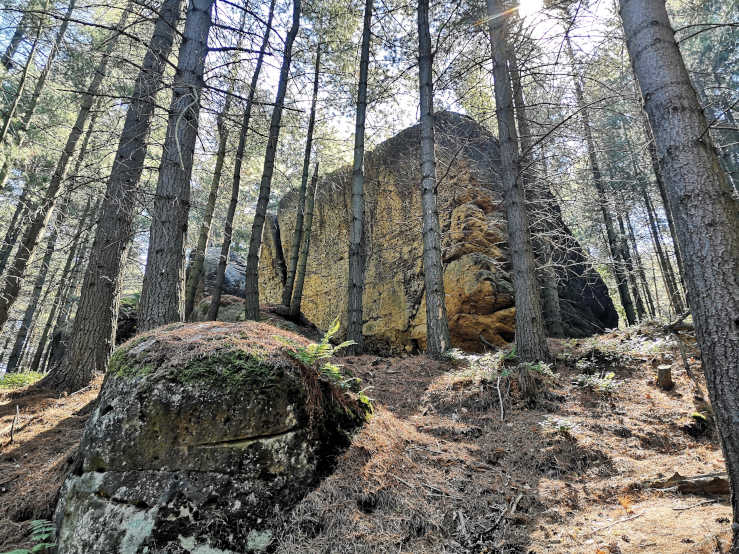 When you visit the more rural areas, the particular building style of the log houses with white stripes between the logs is also noticeable. Almost everywhere there are awesome hiking routes across the varied landscape – whether through hay fields, rocky terrain, or lush forests. When you least expect it, you come across hidden gems such as the Czech Brother altar (Bratrský oltář) just off Česká Kamenice. 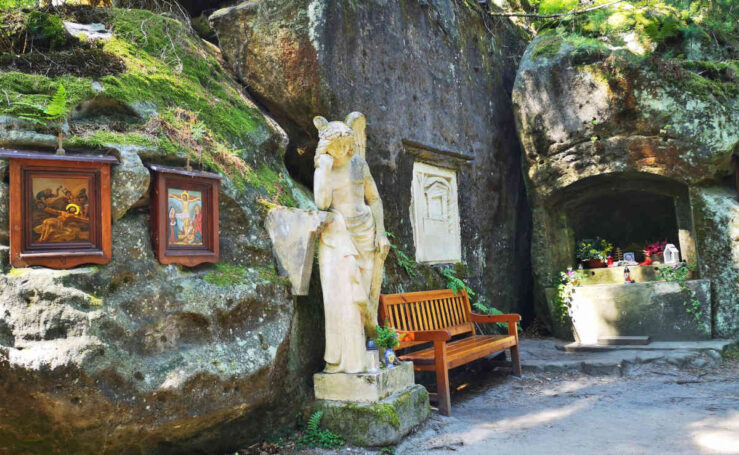 Bohemian Switzerland is much more than the scenic landscape. It is also picturesque small Czech villages where you are woken up by the roosters crowing and you can enjoy the local culture – both in terms of trying regional food specialities and when meeting the locals. One of the local inns with a very authentic ambience is Penzion U Cempu. 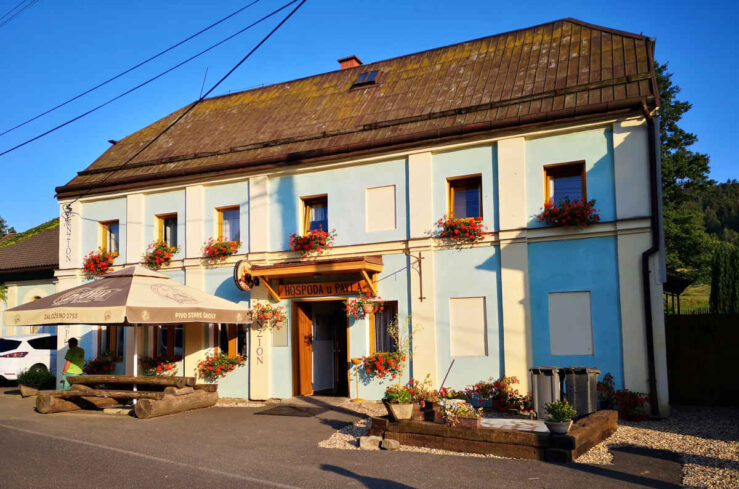 Read next: Why Visit Brno Instead of Prague and Visit Bratislava from Vienna 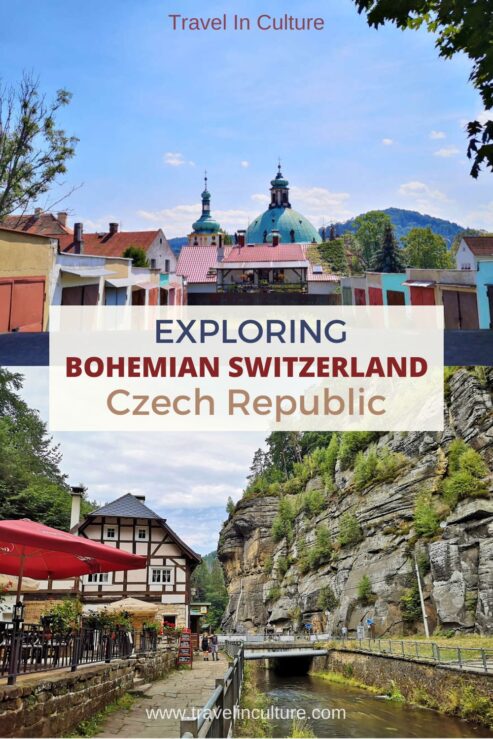 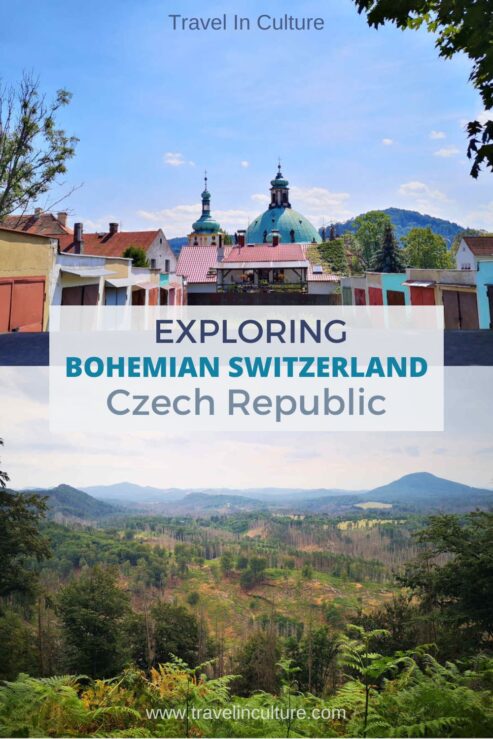