↓
ARGENTINA  After a couple of days in Buenos Aires you will know that the neighbourhoods change in architectural style as fast as you discover them, and you will begin to appreciate the local, authentic hotel, café or restaurant tucked away in a classical building, maybe behind flourishing balustrades.
Ainnelise Niyvold Liundbye
This page has affiliate links (if you purchase through our links, we get a small commission at no extra cost to you - thank you!), see our Privacy Policy & Disclaimer.

The Ministro Pistarini International Airport, also known as the Ezeiza International Airport, is located far out of Buenos Aires, 27 kilometres (17 miles) away, with no handy train connection to reach the city. At the information desk a young lady soon persuades us to take the local, public bus with a stop just 200 metres from the airport entrance.

The wait is not long before the bus arrives. We can hardly believe the ticket price when we see it on the display – and are absolutely amazed that we can get all the way into Buenos Aires for this! It is far below the normal shuttle fare!

We now get a bus ride and a complimentary sightseeing tour with local Argentinians getting on and off at the quaintest small places. The bus finally drops us at the intersection of the wide, green Avenida 9 de Julio and Avenida Belgrano, at a short distance from our hotel at Avenida de Mayo.

Crossing the widest avenue in the world we have to admit that we are quite impressed. The Avenida 9 de Julio has 14 lanes – 7 in each direction! 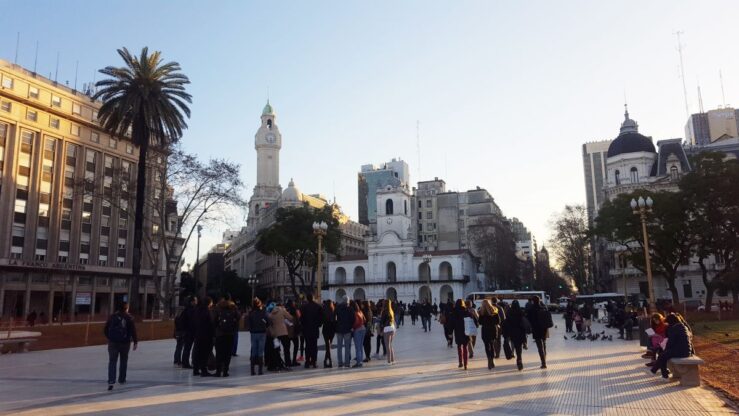 Buenos Aires is a lovely mix of architecture with roots in European styles, brought to the country by the immigrants arriving from Europe during the last centuries. The styles reflect the architecture in their home countries and cities of origin. Many of the buildings date back to 1860s – 1920s, and around the heights of the European immigration in 1914 the European styles had come to influence the capital significantly. 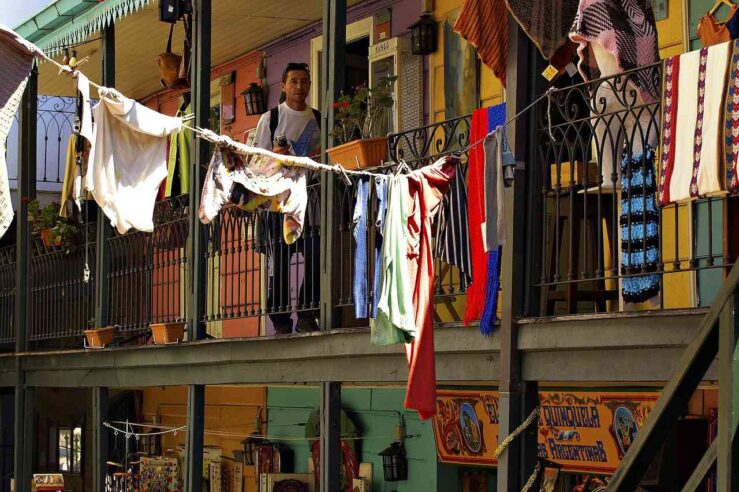 These styles blend in with houses from old colonial times in San Telmo, and altogether it is a sheer paradise for visitors and Argentinians with architectural interests. Neoclassicism, Art Deco, Art Nouveau, Eclecticism, Colonial, Modern and Contemporary styles are all present across the city.

A Buenos Aires café or restaurant is no exception. Many eating places feature an authentic interior dating to the city’s architectural heyday. One of these is a dazzling restaurant where we have the most tasty steaks in Buenos Aires, nearly all waiters’ attention and the very best service! It is not for nothing that Argentina is reputed to have the best steaks in the world. We have come for tasty, Argentinian steaks, and that is – without exaggeration – what we get!

Art Nouveau is the style appearing around 1900 with elements belonging to nature: flowers, plants, animals and curved natural lines, as important elements in the design. The style is also known as Jugendstil in Germany, Secession Style in Austria, Modern Style or Liberty Style in England, and el Modernismo Catalan in Spain where the Catalans integrated it with their distinctive Catalan culture.

We have booked rooms in one of these old 19th-century hotels, which turns out precisely these years to be undergoing renovation to preserve the original style. The place has got character with its décor and high ceilings. All interior, furniture as well as wooden panels, notably follows the style from the early 1900s. As we understand it, it is a long process to renovate the hotel completely. Due to the work going on part of the building is therefore at the moment closed off to the hotel guests. 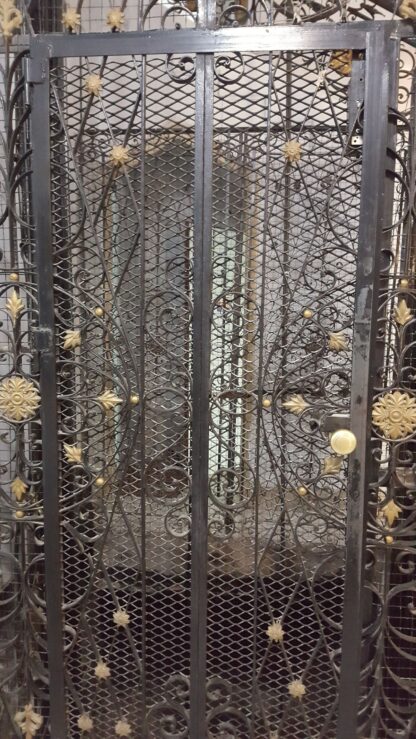 We are delighted to discover the antique, beautifully decorated lift with a stained glass roof in Art Nouveau style above. The lift seems to work since it is sometimes in the hall and sometimes on the top floor where we stay. Anyway, we opt for the stairs and take some exercise! You never know if such an old lift is reliable, and the sensation of being stuck behind the heavy iron door is not anything I fancy…

Through the wrought iron balcony railing outside the breakfast restaurant, we have a view to fashionable Buenos Aires avenues with their hectic morning traffic. Another impressive Art Nouveau building, Palacio Barolo, is situated just a few houses to the side. 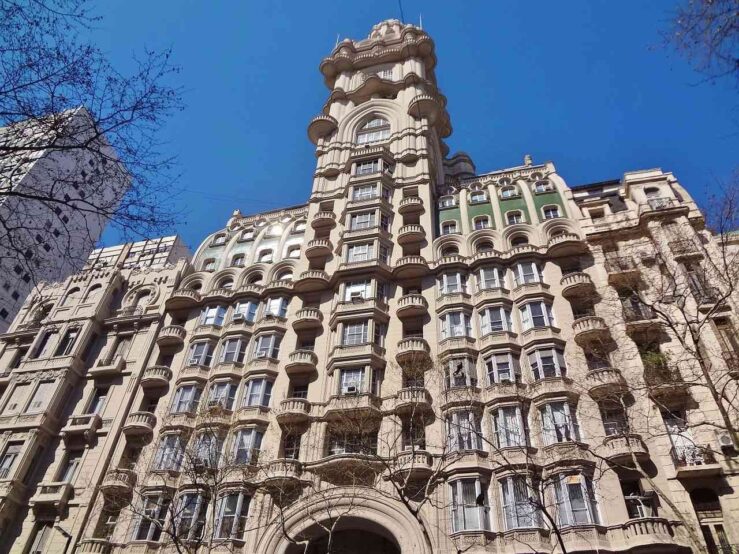 Buenos Aires is full of neoclassical architecture which is the style dominating n the world between the 1860s and the 1920s. You will notice it on a number of public and private building facades in the city. The neighbourhood Recoleta features numerous example of the neoclassical style. Elements of the neoclassical architectural style refer to the classical Greek and Roman styles characterised by their columns, domes and arches. An example is the National Congress with its characteristic green dome.

Close to Avenida de Mayo you will find both the neoclassical National Congress and one of the most prestigious opera houses in the world, the Teatro Colón, in this same style. 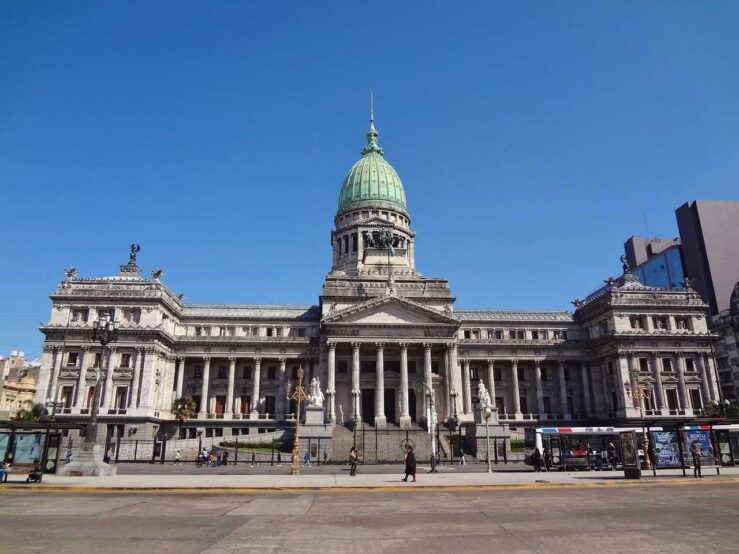 Our location on Avenida de Mayo is really excellent, and the avenida itself features a number of neoclassical buildings. On the other side of the National Congress the renowned Gaudí-inspired Palacio de los Lirios appears. A stroll in the neighbourhood is a true lecture on art history!

Buenos Aires is a modern metropolis with both American and European trademarks. If we hadn’t had a clue where we were, we could probably easily have mistaken it for a South European capital. McDonalds and Burger King are here as well, but they also have their own Argentine hamburgers which are much better deals! 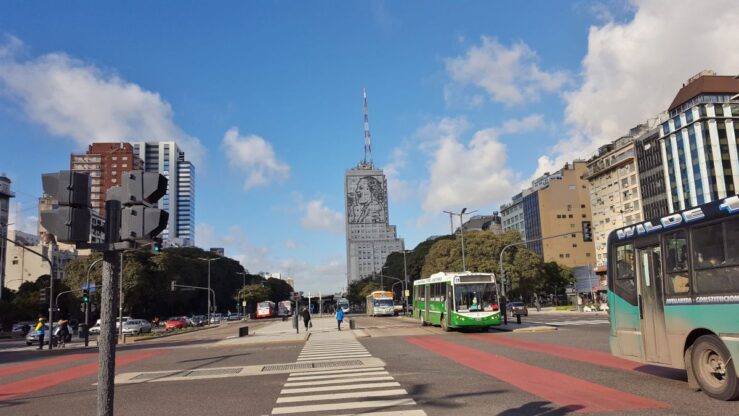 The avenidas are spectacular with their immense, stylish buildings. Just round the corner on Avenida 9 de Julio the iconic Obelisco de Buenos Aires stands, and we are met by the impressive portrait of the actress Eva Perón every time we pass the broad avenue. It is a 9-storey portrait covering the entire facade of a building, inaugurated in 2011 on the 59th anniversary of Evita’s death.

Eva Perón was the wife of the former president of Argentina, Juan Domingo Perón, politically very active fighting for women’s rights and passionately dedicated to charities. She was among the most popular people in the country at the time, and according to what we hear, the Argentinians went crazy when the portrait was released! She is still ‘hot’ here!
San Telmo and La Boca

Strolling through the neighbouring quarters leads to San Telmo with its antique markets, tango venues, colonial cobbled streets and bohemian setting. If you long for a tango performance, you may be lucky to catch a glimpse of it in San Telmo with its vivid street art and whirl of activity. Hip Buenos Aires cafés reflect the atmosphere here! Continue to La Boca for another outstanding experience. 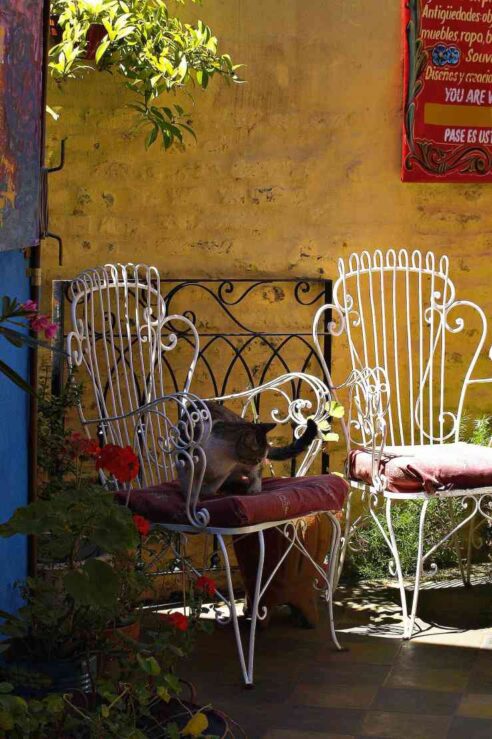 La Boca appeals to most visitors with its colourful, trendy conventillos, communal housing from earlier times and as one of the landmarks of Buenos Aires today. It was here the European immigrants traditionally settled between 1880 and 1930. No sightseeing tour without a visit to La Boca!
Art Deco

In stark contrast to all the traditional neighbourhoods we now find ourselves at Puerto Madero from where we will take the ferry to Colonia del Sacramento in Uruguay on a day trip. This part of Buenos Aires is dominated by the taller, modern building complexes – besides the Art Deco Kavanagh building – which was the tallest skyscraper in South America at the time of construction!

The Art Deco style is another dominating style in Buenos Aires – easily recognisable from its pronounced geometric shapes and lines. Another example of the style is the Abasto Market, the old fruit and vegetable market in the city, today a shopping centre. 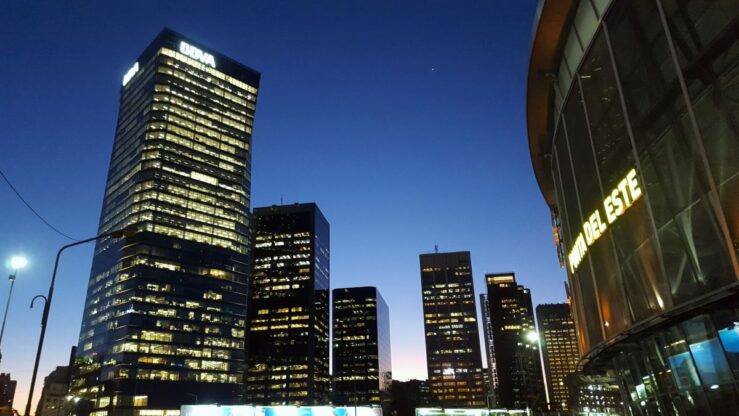 At first sight the gleaming office buildings don’t appear that interesting, but when we come back from Colonia at the fall of darkness, they have turned into the most fascinating, lightening towers.

On our way back towards Avenida 9 de Julio, which has by now become our point of reference in the city, we notice all of a sudden a remarkable activity in the street. Something is going on. The local juggling school is performing. They are cool and entertaining, so we just need to stay watching!

When we wake up next morning, part of our street is blocked by police cars and 15 police officers on motorbikes lining up just outside our hotel with guns and gas masks. It turns out that a demonstration has been announced and the assembly point is here.

Some hours later, we coincidentally end up right at the demonstration at the National Congress. It is the Argentine volunteer firefighters or Bomberos Voluntarios protesting against the insufficient funding for equipment and protection gear and demand appropriate healthcare. 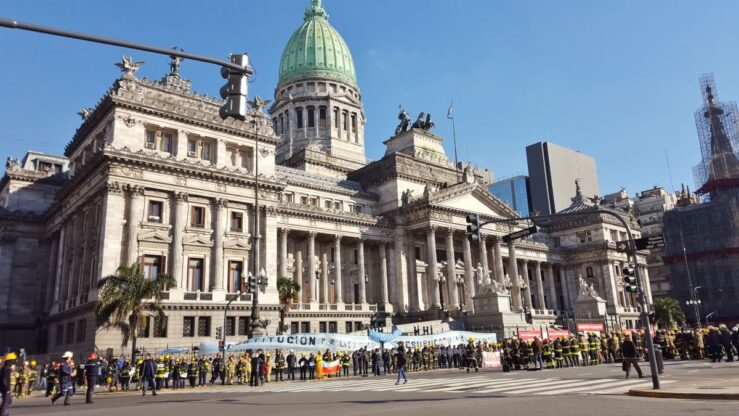 The volunteer firefighters protest in front of the neoclassical National Congress | Photo: Travel In Culture

They are all most impressive in full firefighting gear. Anyway, it seems pretty peaceful, and we even spot a couple of the volunteers in a nearby local café, an authentic Buenos Aires confitería. Here we get awesome mocca, huge glasses of freshly squeezed juice, tasty sandwiches and complimentary cookies.

‘Styles in a Hip Buenos Aires Café or Restaurant’

Soak up the styles in a Hip Buenos Aires Café or Restaurant: