↓
DENMARK  Frederiksberg Gardens is the historic park situated at Frederiksberg in Copenhagen. A stroll through the lush garden and surrounding neighbourhood will reveal interesting facts about the cultural life playing out here throughout the last centuries. At the same time Frederiksberg Gardens is a veritable oasis in the otherwise bustling city.
Ainnelise Niyvold Liundbye
This page has affiliate links (if you purchase through our links, we get a small commission at no extra cost to you - thank you!), see our Privacy Policy & Disclaimer.

Frederiksberg is a charming and historic city district in Copenhagen featuring the most lovely gardens (Frederiksberg Gardens). The area has a rich cultural life – and its own municipality status along with its own city hall, although entirely surrounded by neighbourhoods belonging to the Municipality of Copenhagen.

What in particular contributes to Frederiksberg Gardens and the area being so attractive today, is the short distance to the city’s wealth of attractions such as museums, theatres and plentiful shopping opportunities.

Ascot Hotel (mid-range) set in a charming 19th-century building near Tivoli and the Central Station. The hotel offers a breakfast buffet and has free gym access.

Copenhagen Island Hotel (top) this modern, stylish hotel is located on an artificial island in central Copenhagen near Fisketorvet and is only one train stop from Tivoli and Copenhagen Central Station. 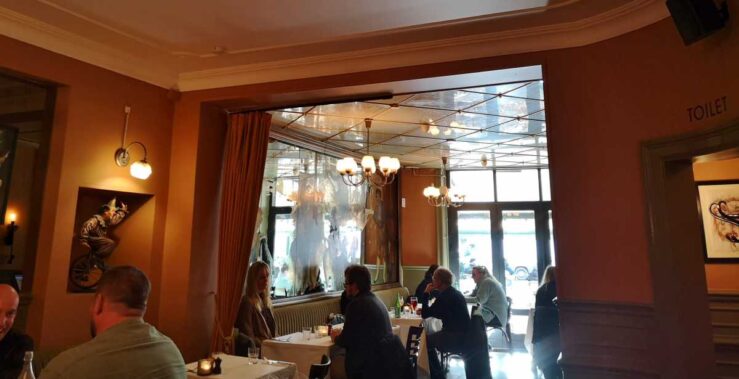 In the mid 18th century, Frederiksberg developed into a popular entertainment district, filled with theatres and other intriguing diversion options.

One of the absolutely central streets is Frederiksberg Allé, the impressive broad tree-lined avenue with two double rows of linden trees, connecting Vesterbrogade and Frederiksberg Runddel, as well as leading to the lovely Frederiksberg Palace and Gardens. 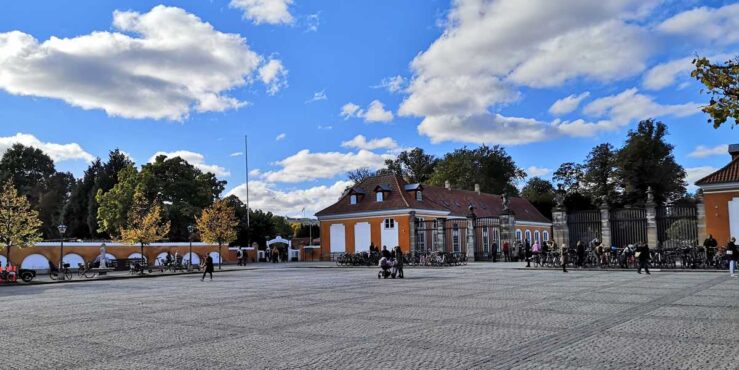 Frederiksberg Allé is originally constructed in 1704 as the King’s majestic private road, that he would use to access his summer residence, Frederiksberg Palace. With inspiration from French city architecture, Frederiksberg Allé was projected to enable the King to arrive at his new property from the city of Copenhagen through the old western city gate, Vesterport. This brand new avenue was soon known as the King’s new road, replacing the King’s old road, Gammel Kongevej.

The castle was established on the grounds previously owned by Dutch farmers, where they had had their base, until 1697, when a devastating fire ravaged and left the settlement uninhabitable. 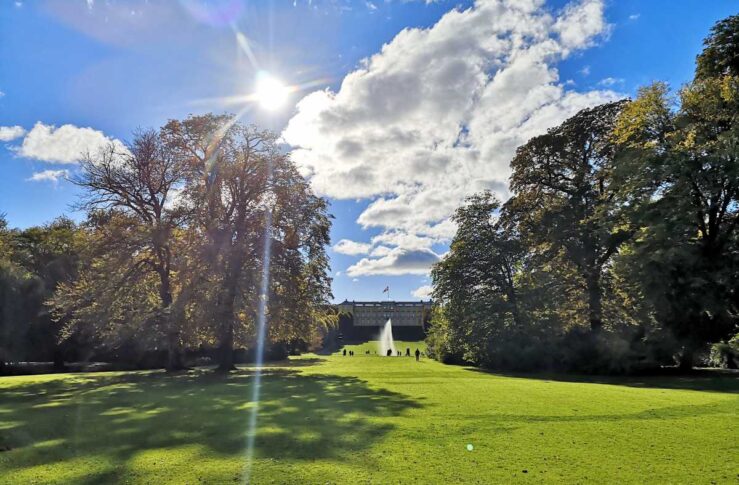 King Frederik IV now seized the opportunity to erect a new summer residence with extensive adjoining baroque gardens, the Frederiksberg Gardens, in the soft hills here. In 1703, the palace was completed, a year before inauguration of the road.

The palace park was designed and laid out over a 30-year period in the baroque style trending at the time. Today, there are still visible traces of the old baroque garden, as well as the romantic landscape garden, which, in particular, was appreciated by King Frederik VI. He would sail on the canals and socialise with the citizens going for a stroll in the gardens. 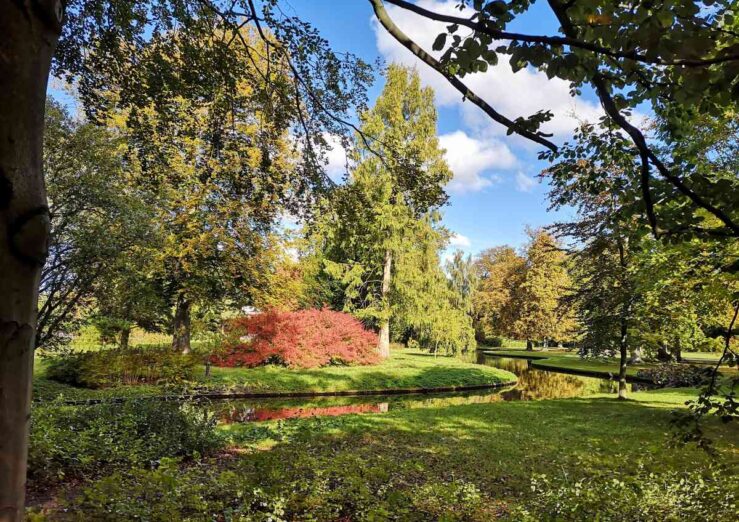 Still today, Frederiksberg Garden is among the largest and most enticing green spaces in Copenhagen, with a canal system, as well as exotic trees and bushes, popular with all ages for an outing or a picnic, locals and tourists alike. A boat service operates on a frequent basis and allows visitors to explore and experience the Frederiksberg park in Copenhagen from the canal side. 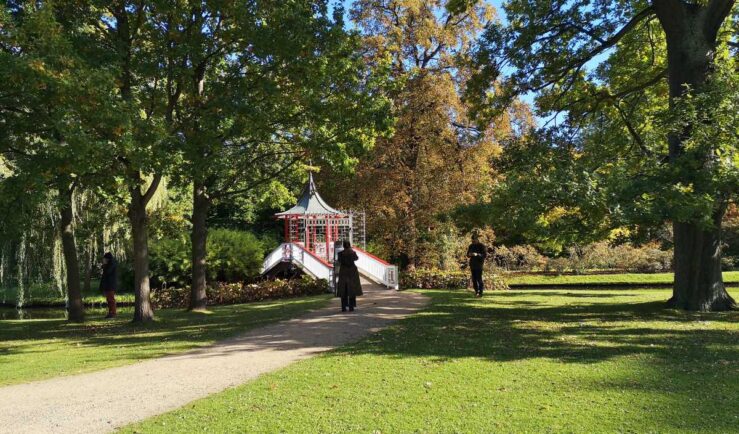 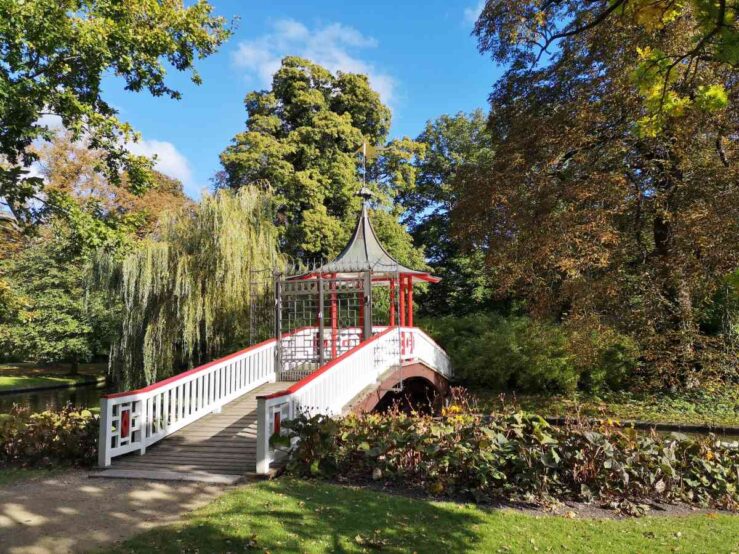 A number of cultural events take place in this Copenhagen oasis throughout the year. Inside the garden there is a small island with the Chinese Pavilion, a perfect Royal teahouse dating from 1799. 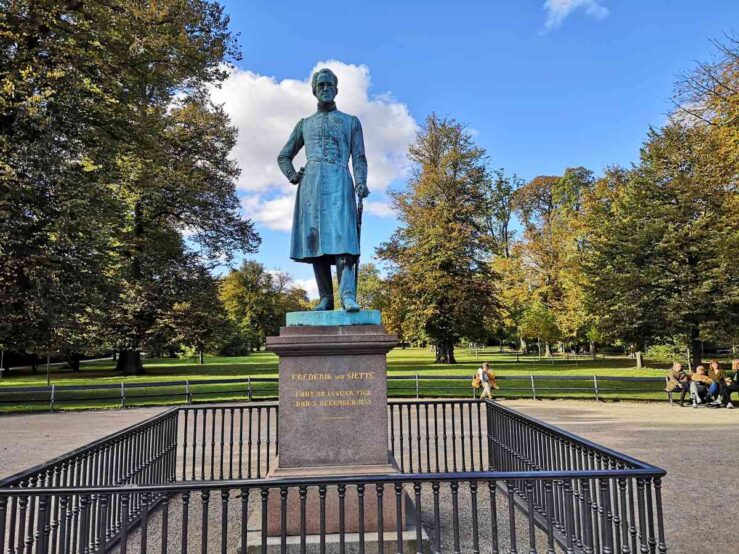 Frederik VI at the park entrance | Photo: Travel In Culture 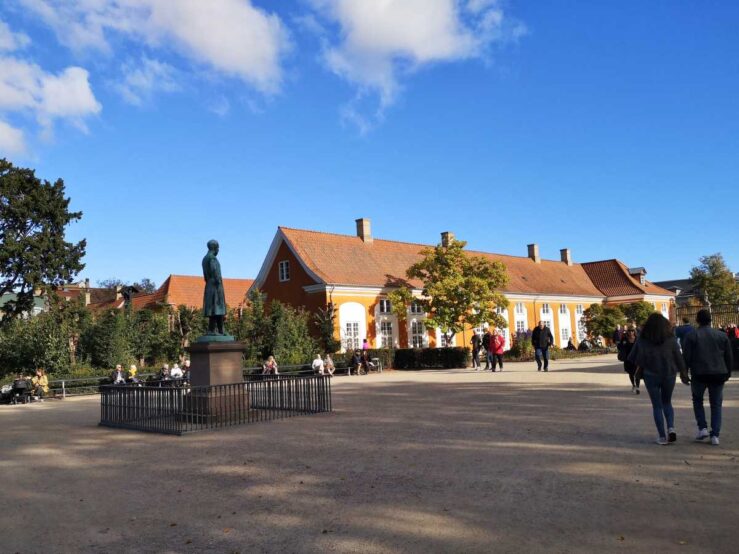 Today, Frederiksberg Runddel features a statue of Frederik VI at the park entrance. In this way he still greets the people visiting his much cherished gardens. Other interesting places around the square include the Royal Horticultural Society (Haveselskabets Have) and the Storm P. Museum, a biographical museum dedicated to the Danish humorist and multi-faceted artist Robert Storm Petersen, in public known as Storm P. The museum includes his paintings and other talented works, as well as a quaint collection of smoking pipes. 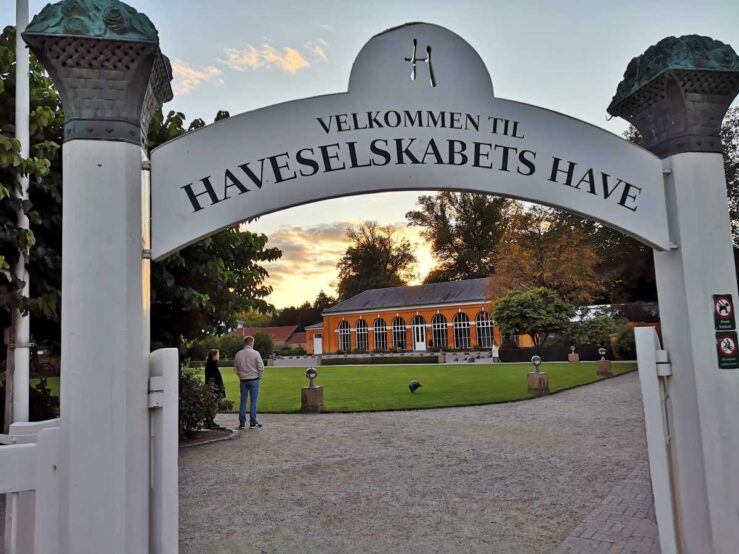 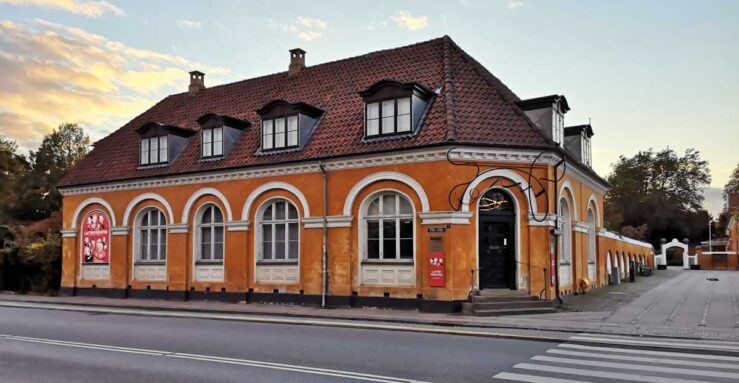 Only a stone’s throw away from Frederiksberg Gardens, other sightseeing options are Copenhagen Zoo, founded in 1859, and the adjoining scenic park, Søndermarken, from the 1730s. Originally, it was the extension of Frederiksberg Gardens, which was used by Frederik VI as his private hunting grounds. Søndermarken features a number of fascinating constructions such as the Chinese Pavilion, the Hermit’s Hut, the Cordwood Grotto and the Spring Grotto.

Another interesting site to visit here are the Cisterns, a large underground facility which used to be the former water tank of both Carlsberg Brewery and the Municipality.

At Frederiksberg a considerable number of historic buildings and entertainment establishments have seen the light of day throughout the last centuries. Sommerro, Sans Souci, Alléenberg, Valhalla, the Schweizer Pavillon and Sommerlyst, a beloved pleasure garden from 1834 with ferris wheels and a merry-go-round, as well as a Moorish attraction and entertainment complex, Alhambra, founded by Georg Carstensen, who was also Tivoli’s creator. 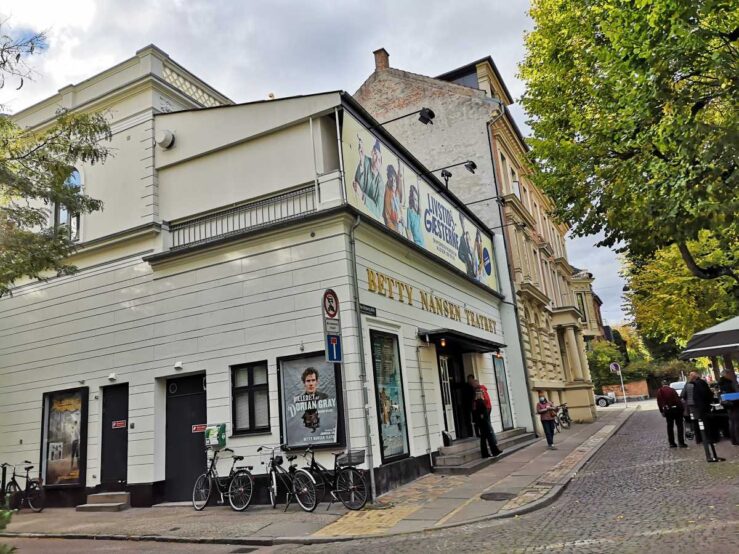 Moreover, several concert halls and theatres appeared, among these Odeon from 1857, the later Frederiksberg Entertainment Theatre. The theatres actually remained at Frederiksberg, and Frederiksberg Entertainment Theatre was acquired by the actress Betty Nansen from 1917 until 1943, and therefore named after her as Betty Nansen Theatre. Another theatre which entered the cultural scene was the ABC Theatre. Also Aveny-T popped up in the old main building belonging to Sommerlyst. 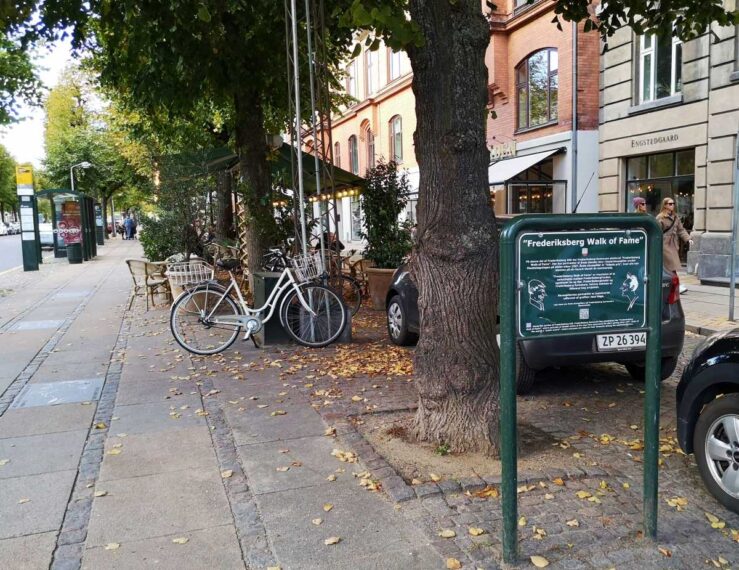 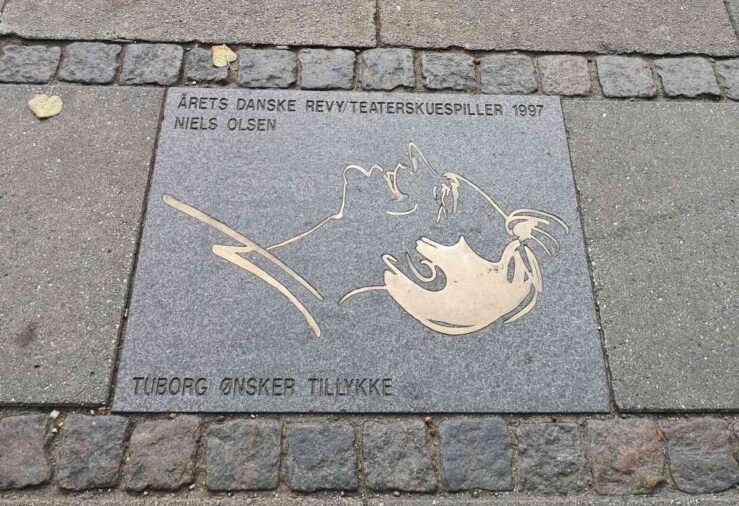 Frederiksberg Walk of Fame with portraits of Danish actors | Photo: Travel In Culture

Today, you can do the Walk of Fame along Frederiksberg Allé, where a number of more recent Danish actors are depicted on the pavement. It is really a historic stroll down the fine old street with the cream of the crop of centuries old residential buildings, still being used for apartments or stylish restaurants, cafés and upmarket boutiques. 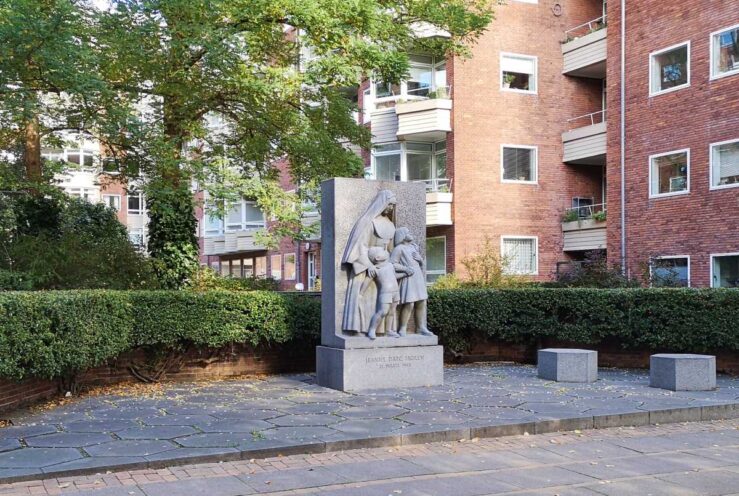 A true tragedy in Copenhagen was the bombing of the French Catholic School, the Institut Jeanne d’Arc, in 1945. It was an accident during the British air raids on 21 March 1945, which had the Shell House as intended target. 86 pupils lost their lives. When strolling down Frederiksberg Allé, you will be passing the monument to the former French school.

Would you like to get inspiration for 3 days in Copenhagen? Then read Nyhavn, Tivoli & Rosenborg Castle – Copenhagen in 3 Days

Read next: The Carlsberg Elephants in Copenhagen and Why Visit the Historic Tivoli Gardens?

The Secrets of Frederiksberg Gardens 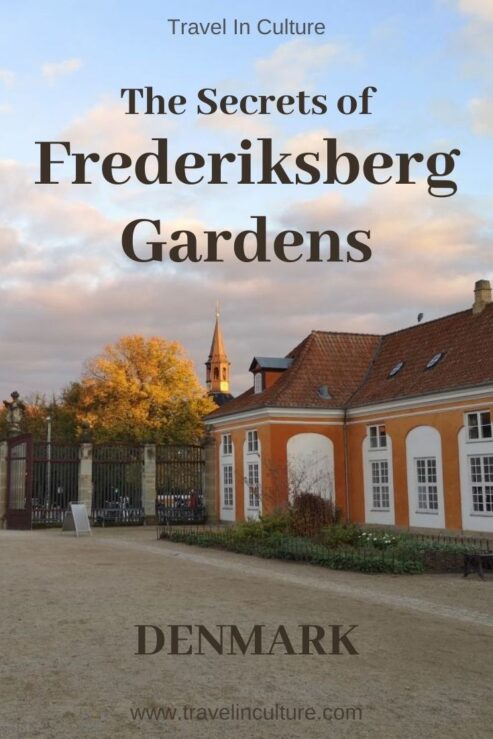 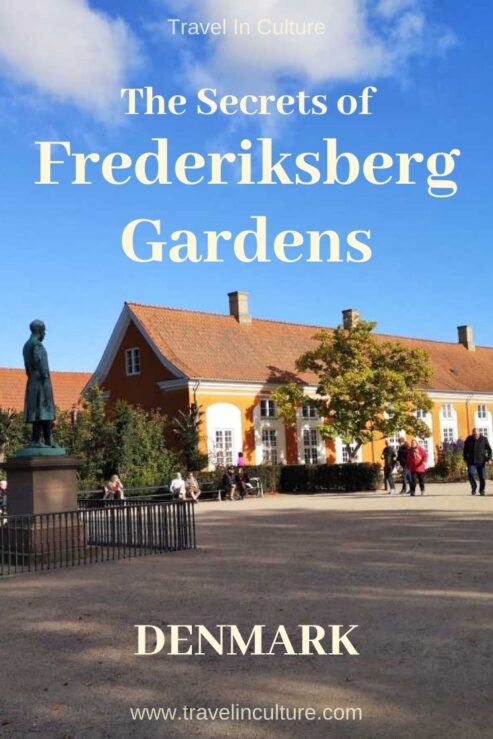 Featured image of
The Secrets of Frederiksberg Gardens:
Travel In Culture