↓
URUGUAY  When you need an escape from Buenos Aires and all its cultural monuments and sights, an option is a getaway to Uruguay on a day trip. The Seacat Colonia ferry will take you across the wide and shallow river to the tranquil colonial town, Colonia del Sacramento, Uruguay, in just one hour.
Ainnelise Niyvold Liundbye
This page has affiliate links (if you purchase through our links, we get a small commission at no extra cost to you - thank you!), see our Privacy Policy & Disclaimer. 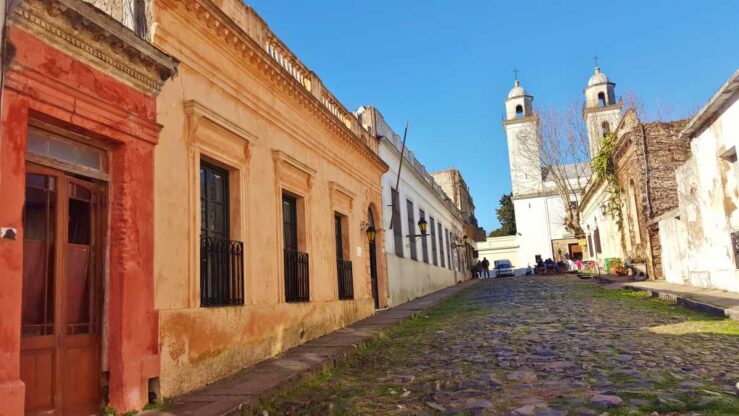 Fighting a bit with the Seacat Colonia website, where our foreign credit cards are not accepted, we decide to wait and buy the ferry tickets in person, once in Buenos Aires.

The Seacat Colonia agency is not located at the ferry terminal, but in the city centre on the address Avenida Córdoba 772. This is where we go to buy the tickets the afternoon before our intended trip to Colonia del Sacramento.

Inspiration for Uruguay trip: Colonia del Sacramento and 9 Cultural Things to Do in Buenos Aires

Fortunately, there are still tickets available for the next day since it is a bit off-season. We need to give passport details as we will be leaving Argentina – even if just for the day.

The agent informs us that we will have to look out for the Buquebus ferry terminal at the Puerto Madero harbour front. We now realise that there are two different companies, both the Seacat Colonia and the Buquebus, selling tickets for the very same ferry from Buenos Aires to Uruguay – but surprisingly enough at different prices! The cheapest tickets by boat to Colonia from Buenos Aires are offered by Seacat, at least today!

Where to stay in Buenos Aires
Advertisement
Gran Hotel Atlantic is conveniently located at Once, which is a local, traditional neighbourhood of Buenos Aires, close to the metro. The hotel has air-condition, soundproofed windows, a bar and free WiFi. A buffet breakfast is served every morning.

Online we have read various descriptions of how problematic the immigration procedure can be. It is comparable to going through immigration in an airport. However, after travelling through five South American countries and doing a similar number of border crossings with immigration challenges varying in degree, we believe that the crossing from Buenos Aires to Uruguay cannot be more frustrating than some of the others we have done. 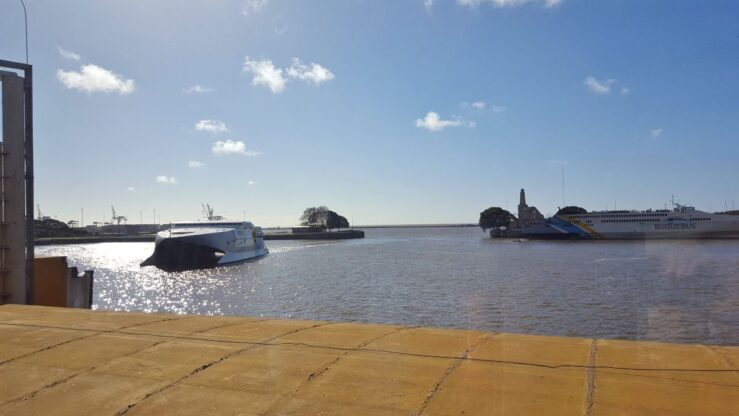 Taking the early morning Buenos Aires – Colonia del Sacramento ferry to Uruguay, we turn up at the harbour in due time for departure, more precisely an hour before, as advised by the Seacat Colonia agency. Puerto Maduro is only a few kilometres from our hotel and we have decided to walk down there, avoiding the intense Buenos Aires morning traffic with congestion and possible delays. 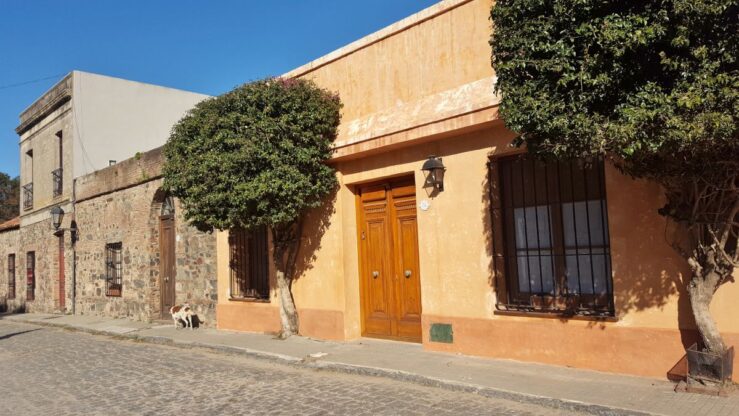 As expected the immigration procedure is a bit cumbersome. However, all passengers finally get through, and with a delay of only 15-20 minutes the Seacat ferry seems ready to leave Buenos Aires in direction of Uruguay!

We are going to cross Río de la Plata or the River Plate in English. The river has long ago become the natural border between Argentina and Uruguay. At the inner and narrowest part it is only about 2 kilometres (1.2 miles) wide and at its mouth it widens about 220 kilometres (140 miles) – and therefore holds the record of being the widest river in the world! Surprisingly enough, it is pretty unknown to people outside South America! Whether it is a real river, an estuary or rather a freshwater gulf, is apparently subject to discussion and something there definitely are distinct opinions on, depending on who you ask. All three designations are being used interchangeably. 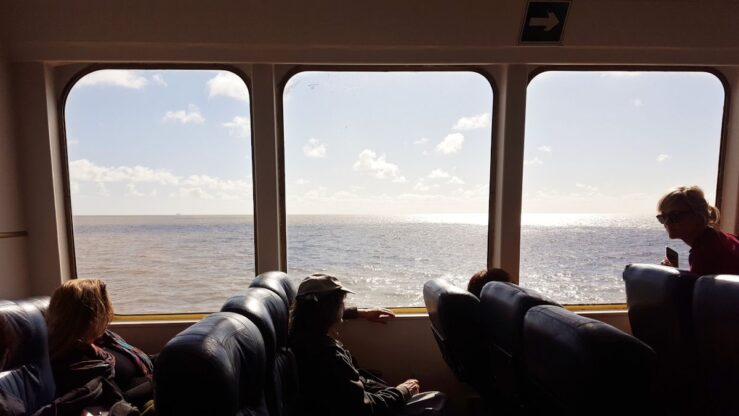 We are crossing the Río de la Plata | Photo: Travel In Culture

The total area of the river is about 35,000 square kilometres (13,500 square miles). Throughout history the surrounding lands have been among the most densely populated areas in Argentina and Uruguay. Buenos Aires is located on the northern shore and Montevideo on the southern.

Río de la Plata is in fact the estuary of the 3 rivers which merge: the Paraná, the Uruguay and the Paraguay rivers. The estuary flows out into the Atlantic Ocean.

From our spot here at Puerto Maduro the river or estuary unquestionably looks like an ocean. On the horizon there is not the faintest sign of land, although Uruguay and Colonia del Sacramento on the other shore are just a little less than an hour away by the Seacat ferry. Only the unclear waters suggest that we are not exactly at the Atlantic Ocean. 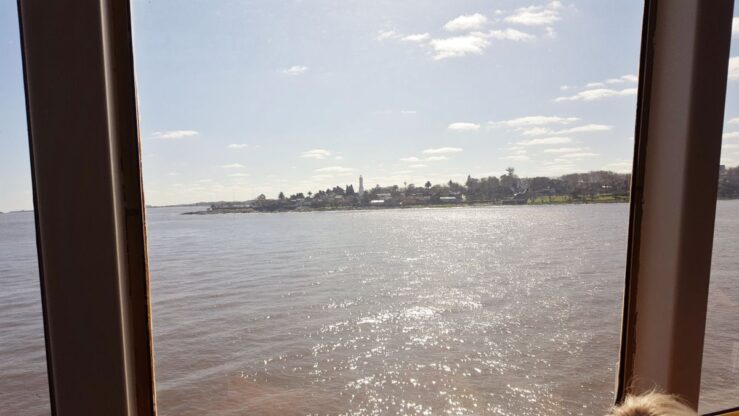 We are approaching Colonia del Sacramento in Uruguay | Photo: Travel In Culture

The river is remarkably rich in history. Prior to the arrival of Europeans the surrounding land was inhabited by the indigenous South American people. From the 16th century onwards Spaniards and Portuguese arrived to trade and settle in the fertile areas along the river with abundant natural resources for agricultural purposes. Little by little the population along the banks increased and cities arose. At the end of the European colonisation and rule, the new established port cities continued to exploit the river areas. 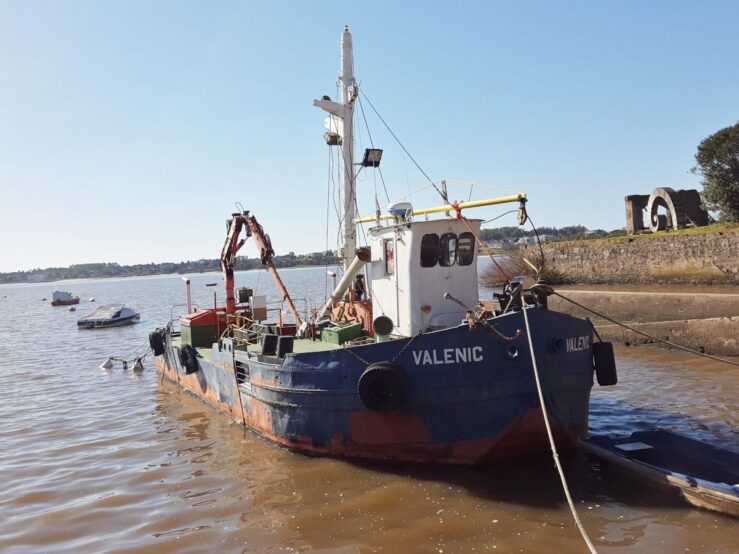 In the beginning of the 19th century British invasions made, as part of the Napoleon Wars, several attempts in vain to conquer Buenos Aires and Montevideo. Each time they were expelled by the strong resistance of the local people.

Also today, the port cities of Río de la Plata have significant importance for the two countries. To a large extent the exports continuously pass through the ports, and this has given rise to lucrative industries along the banks of the greyish brown estuary.

‘Board Seacat Colonia for Your Day Getaway – BA to Uruguay’

On board the modern ferries there is a cafeteria and a duty-free shop. We immediately find a row of comfortable reclining seats with a river view for the crossing. Again, we don’t get the impression that we are on a river. The estuary is broad – where we pass, it is around 50 kilometres (slightly more than 30 miles) wide. Once more, when looking down into the water, we get proof that it is not the ocean, but a river mouth: the water is now not clear at all!

Even if full of muddy sediments, the shallow river and its banks are rich in plant and animal life. It is home for both sea turtles, the La Plata dolphin, iguana lizards, jaguars, tapirs, ocelots, caimans, water boas, rattlesnakes, parrots, eagles, frogs, freshwater crabs, around 350 fish species and many more birds and mammals. A large number of the species are endemic to the Río de la Plata.

All of a sudden we spot the contours of a marine animal under the surface. Not really having a clue what it is, we wonder if it may be one of the endemic La Plata dolphins! 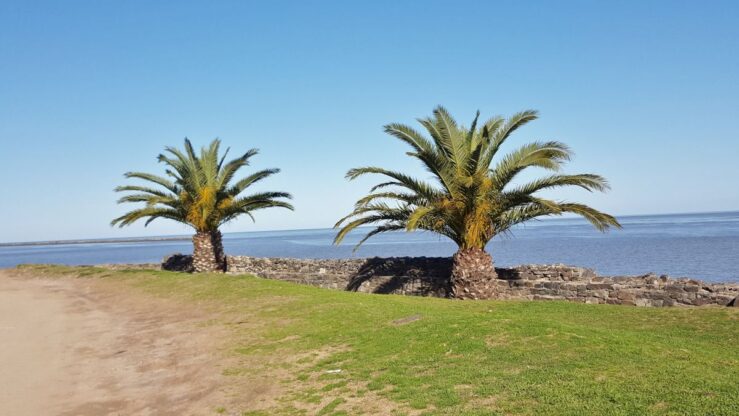 Río de la Plata is named after the myth

The name of the river has roots in an old myth. According to the legend there was a silver mountain somewhere upstream. This fabled Sierra del Plata, which may or may not have existed, was said to be rich in silver mines.

The first European to cross through the Latin American continent to arrive at the Andes Mountains in search of the silver mountain was the Portuguese explorer and conquistador Aleixo García. From this expedition silver was brought back to the coast, indicating the finding of a silver source as in the legend.

Consequently, the wide river as well as the adjacent country were named after the myth and the silver, namely Río de la Plata and Argentina, respectively. Both names are related to the Spanish and Latin terms for silver (plata and argentum). 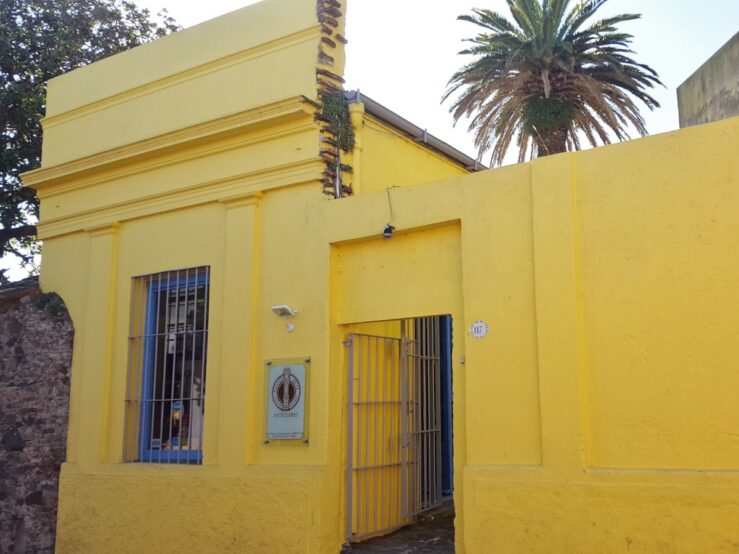 Remains of the old colonial buildings are still in use | Photo: Travel In Culture

Still today, the population on both sides of the banks of Río de la Plata embraces the legend. Both Argentina and Uruguay feature football clubs with names taken from the myth. Teams like River Plate, Estudiantes de la Plata and Platense are the present-day evidence in Buenos Aires and Montevideo of the fabled roots.

Our Seacat Uruguay ferry ride seems short. The vivid freshwater gulf ends, and within a few minutes we set foot on Uruguayan land and set out for an exciting day in Colonia del Sacramento at the widest river in the world.

Read next: When You Fly into Galapagos and Land on Baltra Island