↓
NEW ZEALAND  The indigenous Māori people of New Zealand originate from the Polynesian culture. They have with their fascinating heritage, unique Māori language, body tattoo art and other ancient traditions contributed to the present-day culture here in New Zealand.
Ainnelise Niyvold Liundbye
This page has affiliate links (if you purchase through our links, we get a small commission at no extra cost to you - thank you!), see our Privacy Policy & Disclaimer.

The Māori people arrived in New Zealand from Polynesia and their mythical homeland, Hawaiki, around the 1200s. The migrating people were made up of distinct subtribes whose culture varied slightly in both language, body art, dancing expression and other practices.

Inspiration for New Zealand trip: New Zealand North Island in 8 Days and Rotorua – Can You Smell It? and Visit Whakarewarewa!

Nevertheless, these countries are located far from each other and have very different climates. Out of all Polynesian countries, only New Zealand experiences four seasons! Therefore, the lifestyle and houses here are slightly different from the Polynesian way of life on the tropical islands. Anyway, all the Polynesian cultures can trace their origin back to the same cultural roots. The people were all excellent mariners and travelled the ocean – settling on different islands way apart. 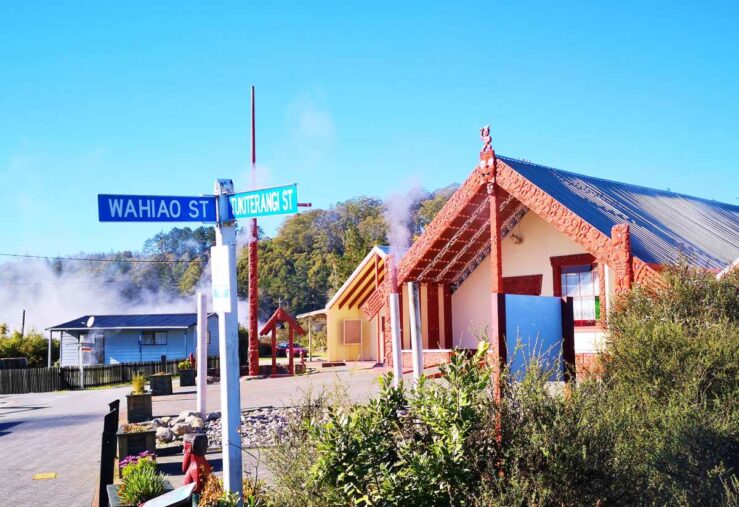 The Meeting House in Whakarewarewa is still being used for reunions and performances | Photo: Travel In Culture

So although dispersed over a very large area today, the Polynesian communities are united through their language background and ancestral roots. They are considered to be a part of the Austronesian people, the prehistoric sea-migrating people originating from Taiwan around 3000 to 1500 BC – reaching as far as New Zealand, Easter Island and Madagascar.

Today, the Māoris in New Zealand make up about 14% of the population, and the Māori culture still infiltrates the society with its traditions, myths, legends, tattoo and language heritage. It is believed that the Māori people prior to arriving in New Zealand had a matriarchal culture, but in New Zealand it soon developed into a patriarchal society!

Moreover, when the European settlers (many of them Irish Catholics) arrived in New Zealand, the vast majority of the Māori people ended up converting to Catholicism! 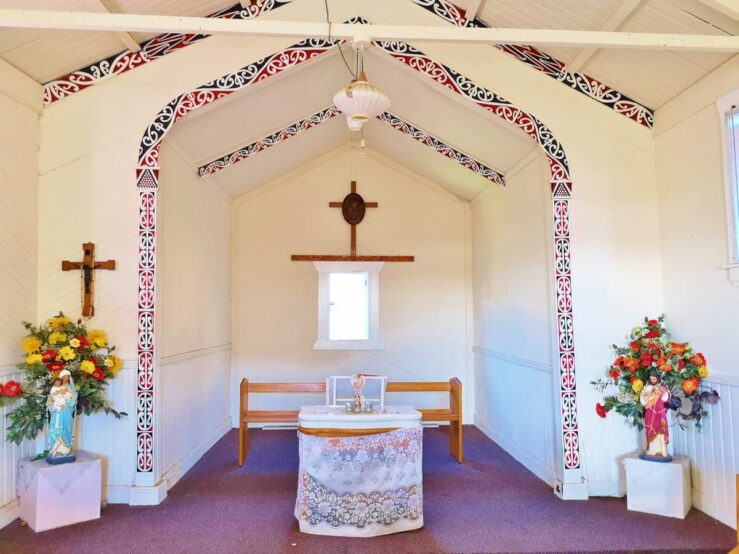 The Māoris’ Catholic church in Whakarewarewa | Photo: Travel In Culture

When visiting one of the living Māori villages in New Zealand, you will to get the opportunity to gain some insight into the indigenous culture and practices here.

One of the things, that will probably strike you, is that the Māori people greet each other by the pressing of noses. 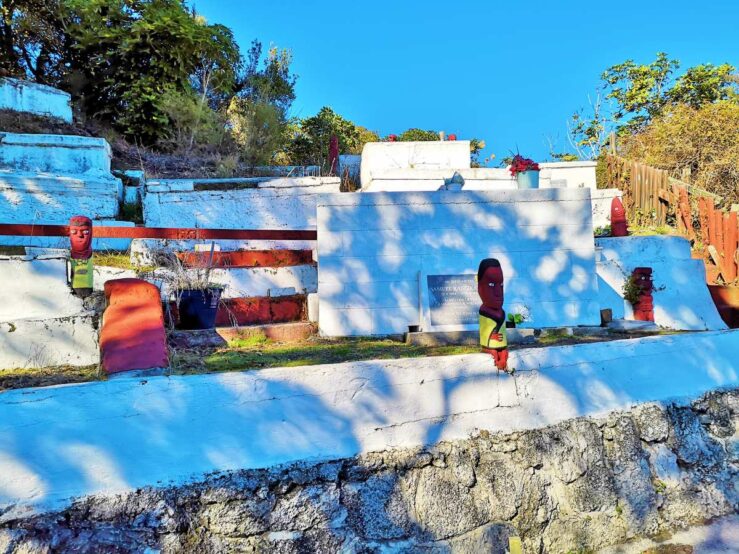 The Māori cemetery at Whakarewarewa | Photo: Travel In Culture

Māori is also known as ‘te reo’ (meaning ‘the language’). You will notice that the Māori language is highly visible in town and other location names all across New Zealand. Aotearoa (“land of the long white cloud”) is the Māori name of New Zealand.

Māori is considered one of the endangered languages, and both the government and the native tribes try to do something about this. In fact, there is these years an increasing focus on teaching the native language in many New Zealand schools.

An example of the Māori language, which you will often hear, is kia ora – meaning ‘good health’.

After the Second World War the urbanisation changed the previous Māori language predominance to English predominance. As a consequence, the Māori people are most often bilingual today. Only about 9,000 people speak exclusively in Māori in New Zealand.

Historically, there was no writing in the Polynesian language. Instead, the Polynesians used tattoo art and distinct signs as a means of communication and of expressing their identity (Polynesian writing tattoo), personality, status and rank in society. Nearly everyone had tattoos in the ancient Polynesian society! 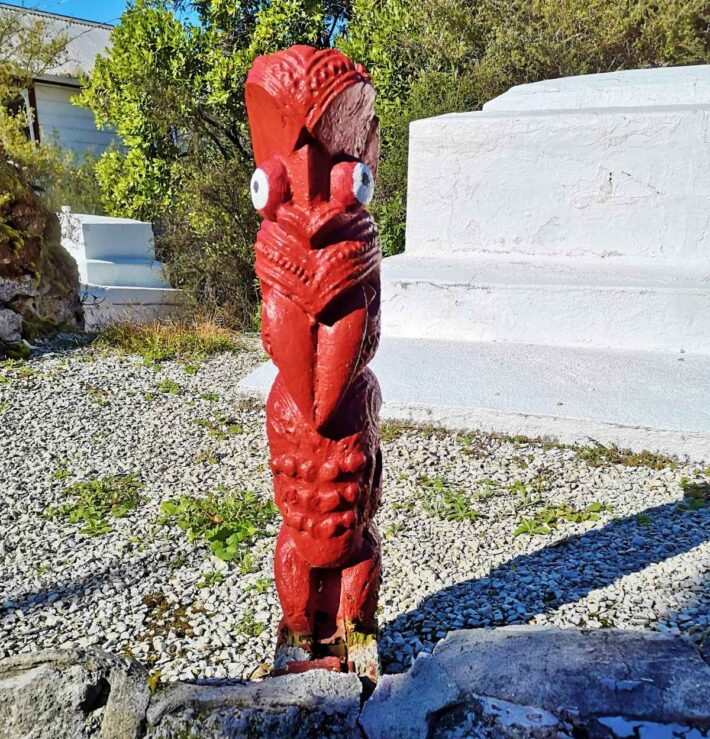 The round eyes and the tongue are important symbols in the New Zealand Māori culture and war dance | Photo: Travel In Culture

The local Māori people have a strong dancing tradition characterised by storytelling while performing. They dance the rituals related to everyday life.

As you will also notice, the carved Māori statues show the same symbols and expressions that appear in the dances. There are common elements like for instance big, round eyes and long tongues. The war dance makes use of these and other elements to scare the enemy! In general the dance reflects the daily life and spans over a wide range of emotions and intensities.

To a large extent the Māori culture is preserved by still living according to what the Māori traditions and norms prescribe, by using the tools and methods used for centuries and by producing and wearing the traditional dress. The long-established performing arts like carving, weaving and tattooing are also still practiced among the Māori people. Handmade products and craft artifacts are today sold to the visitors as part of the tourist industry. 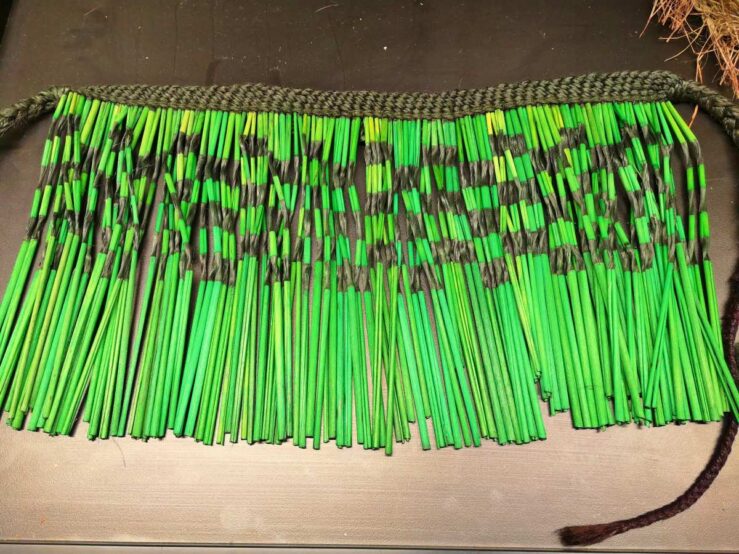 The Māori tattoo traditions and techniques were brought to New Zealand from Eastern Polynesia.

The Māori tattoo culture, ta moko, can be characterised as an artistic expression with its own specific language.

The Māori culture tattoos are produced by carving the skin by chisels – as opposed to needles as in conventional tattooing. Traditionally, the chisels were made of Albatross bones. Later on metal utensils became more usual. The body and face are marked in accordance with the symbols and messages which should be conveyed dependant on who you are. The creative body art is part of the language, and the intricate symbols are unique to the Māoris. Through ta moko symbols both identity, role and social status can be communicated.

The Māori tattoo practice went a bit down at the time of colonisation and adoption of Christianity in the 1900s. After being less popular for some years, a renaissance of ta moko tattooing was seen around the 1980s. Again, it became a cultural practice that was widely accepted in New Zealand. 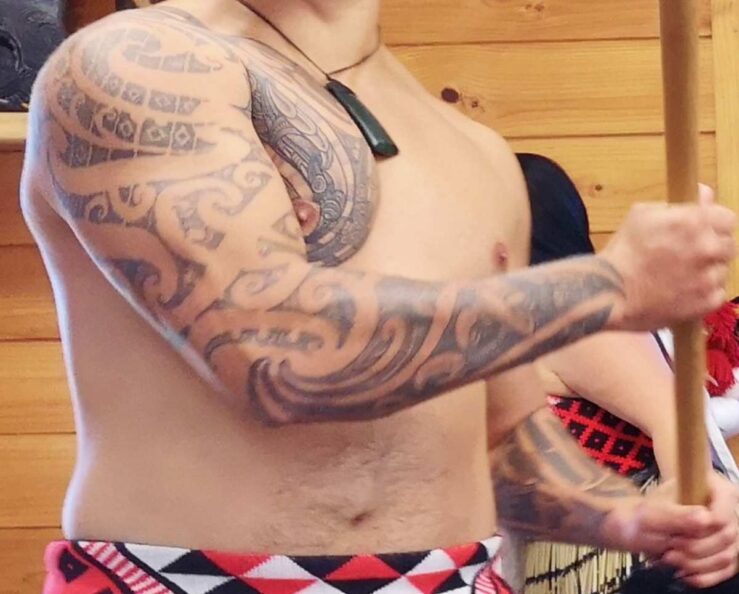 In the Māori culture the body and face can be divided into areas with a ritual meaning. What is marked under the eyes is the physical world, over the eyes the spiritual. The left and the right sides symbolise the mother and the father, respectively.

The markings are part of a visual language that shows the person’s cultural identity. Men commonly wear ta moko drawings on their face, thighs and arms, whereas women usually wear them on specific parts of the face: the chin and the lips. 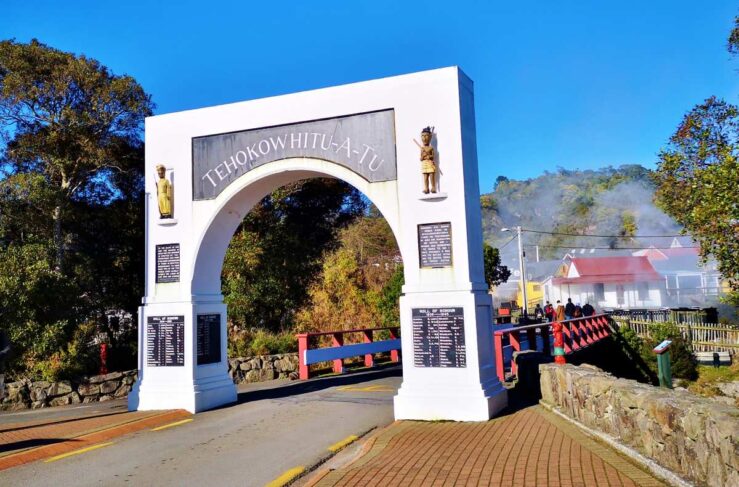 The Māoris live in small village communities around Rotorua | Photo: Travel In Culture

Where to meet the Māori people and culture in New Zealand?

The Māori people can still be found living in small communities in New Zealand, practising their unique culture. They have tribal grounds in several places across the North Island – for instance in Rotorua, the volcanic area with eye-catching thermal activity. 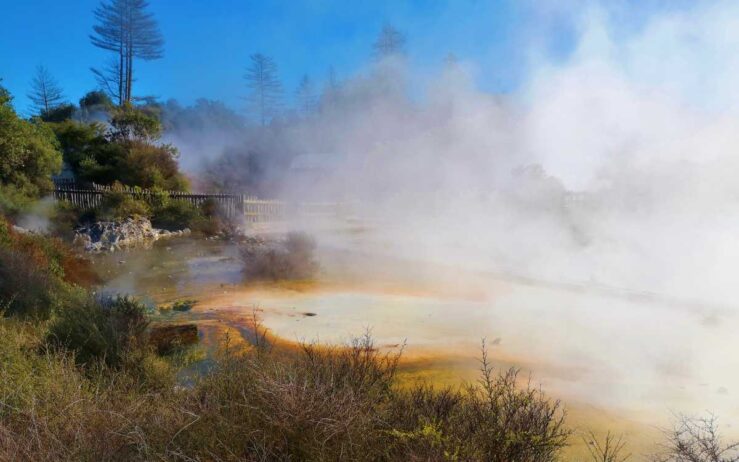 For a fee you can visit their small, local villages. Visitors are invited to attend their singing, dancing and traditional nose pressing rituals at their sites – as well as trying the culinary Hāngi feast cooked in special earth ovens or in the boiling thermal pools just outside their houses. By contributing financially to the Māori culture, visitors help the Māori people to hold on to their original identity and lifestyle. 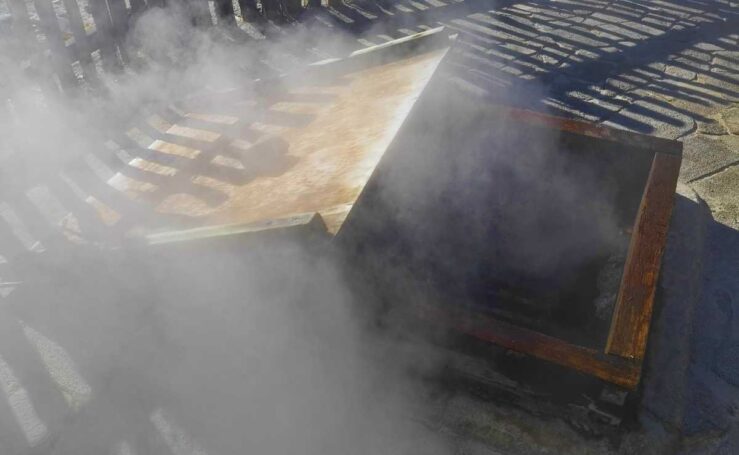 Traditional way of cooking with the use of thermal sources | Photo: Travel In Culture

Read next: Explore Sydney in 4 Days and 15 Cool Things – Melbourne in 3 Days