↓
NEW ZEALAND  One of the highlights in New Zealand North Island is the fascinating volcanic and geothermal area at Rotorua where the indigenous Māori tribes have settled long ago. The area is a mystery of rising gasses, enveloping steams, bubbling mud and crystal clear, colourful hot pools.
Ainnelise Niyvold Liundbye
This page has affiliate links (if you purchase through our links, we get a small commission at no extra cost to you - thank you!), see our Privacy Policy & Disclaimer.
Table of Contents

When visiting Rotorua in New Zealand, you will surely at no moment forget where you are. Wherever you turn, the striking sulphurous odour will hang in the air.

Rotorua in New Zealand features some of the most unique geothermal phenomena in the world. The bubbling and seething underground is the visible sign of all the geothermal activity taking place deep beneath the surface.

As part of the Taupo Volcanic Zone, Rotorua is a geothermal epicentre presenting a uniqueness of colourful thermal pools, wheezing steam vents and fumaroles, simmering mud pools and shooting geysers. It is a natural wonder of immense forces and outstanding features. Not surprisingly, it is a big draw for the North Island visitors. 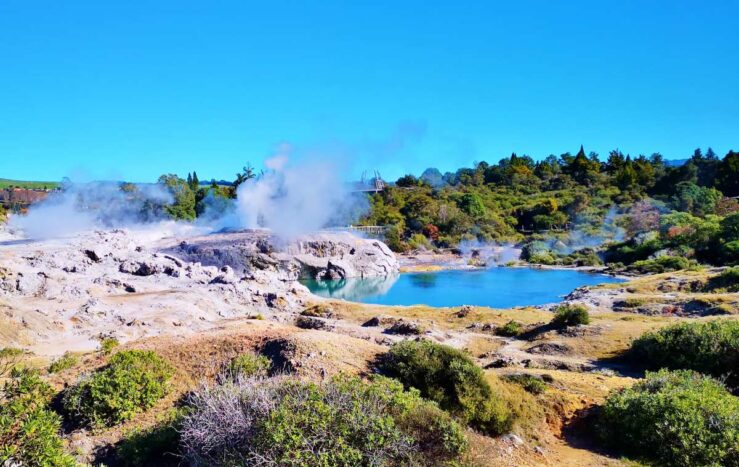 Why does Rotorua smell? Boiling acidic liquids, alkaline waters, colourful pools with a waving surface reflecting the geothermal activity, as well as released gasses are all the natural elements and uncontrollable forces that prevail. The elements undergo processes and react, resulting in a mix of universal gasses – some smelling more than others! 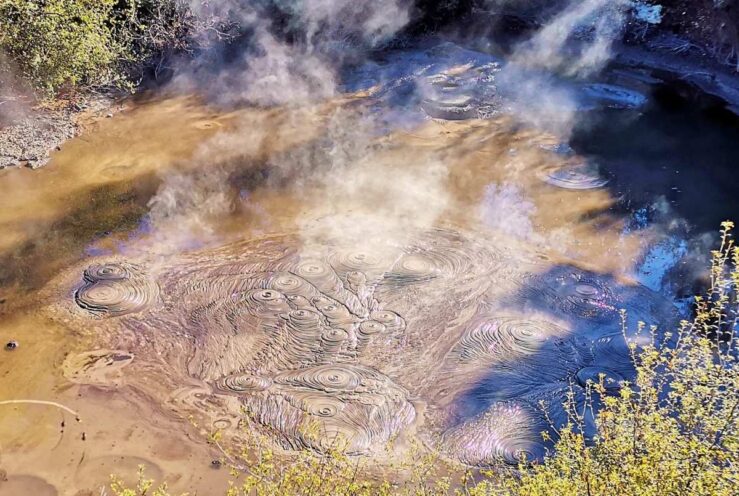 Blobbing mud and thick flows of toxic material together with steam and hydrogen sulphide gasses are the dominating ingredients at some locations here. Others contain surfaces of grey dried silica.

The landscape is moon-like, and if you didn’t know better, you could easily believe to be on another uninhabitable planet in the universe.

Green and brown algues, as well as yellow, grey, blue and black nuances are the visible results of the geothermal processes. 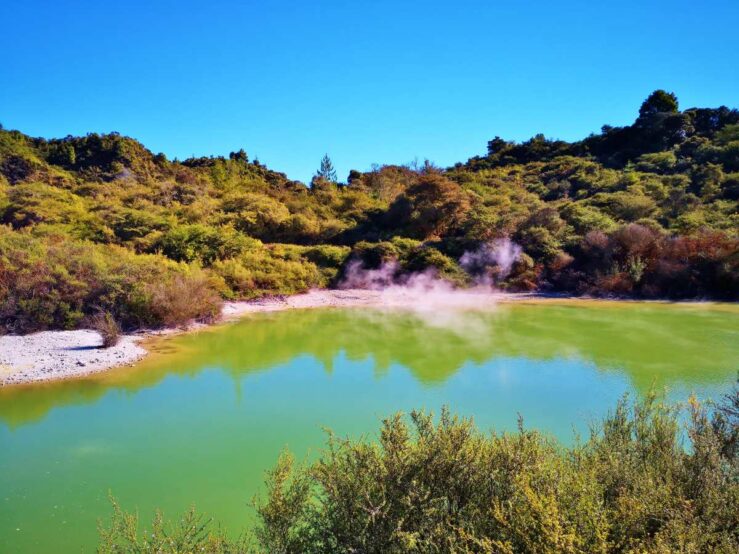 Rotorua Thermal Field is the core of all the remarkable activity existing around the town of Rotorua. It is absolutely stunning to experience the geothermal effects – whether in the city park, Kuirau Park, along the Lake Rotorua or across the surrounding landscape.

Now, crossing the bridge in Kuirau Park leaves you enveloped in a sulphurous mist. 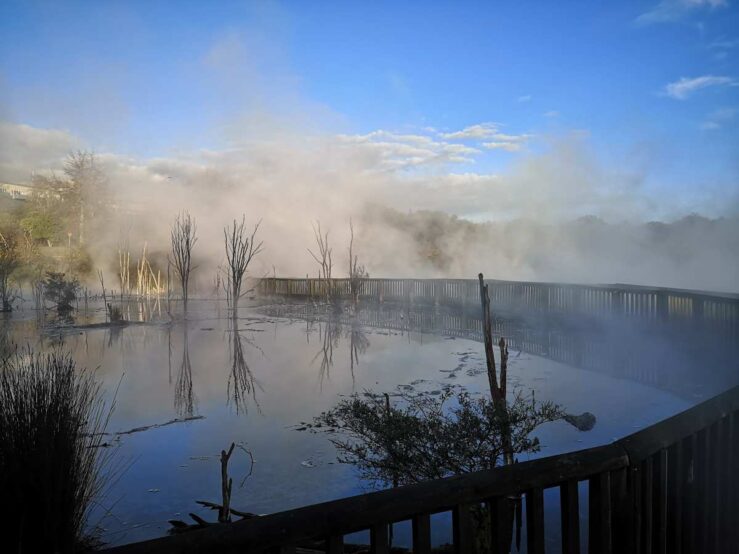 In other places you will notice the bubbling mud pools and the grey hardened, ashy material leaving the soil infertile. The birds are accustomed to the conditions and adroitly thread their way past the hottest areas. This is all the epitome of Rotorua in New Zealand!

In addition to the visual impressions, you’d better also count on another dimension here. It is the smell of sulphur coming from sulphurous gases! Wherever you move around the Rotorua Caldera, you will to a greater or lesser extent sense the odour of sulphur! It comes from the subterranean thermal processes and essentially dominates the area.

Moreover, you will frequently hear the sounds of roaring gases and bubbling steam emitted through vents and fumaroles. 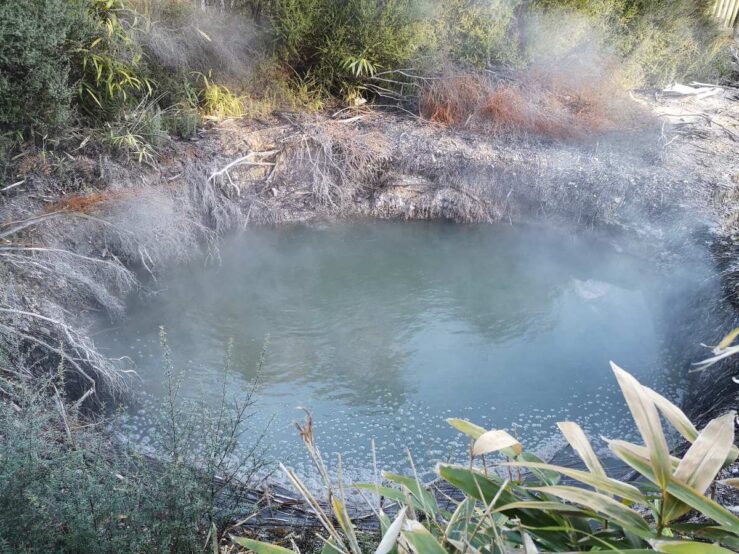 Rotorua Caldera, the large depression created around 240,000 years ago due to a volcanic eruption, is today filled with water and known as the Lake Rotorua. The town of Rotorua has then developed along the southern rim.

In the southern part of Rotorua you will find the Whakarewarewa thermal area containing close to 500 hot springs and 65 geyser vents. 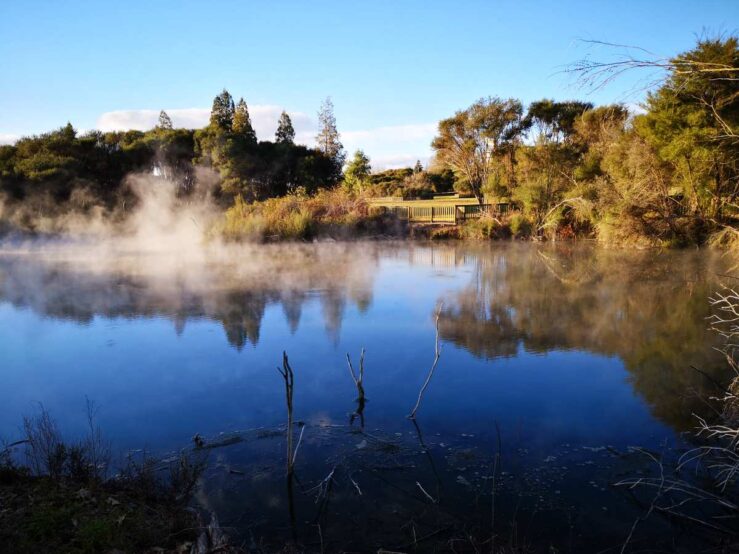 One of the most famous geysers in Rotorua, which is at the same time the largest geyser in New Zealand and even in the southern hemisphere, is the Pōhutu Geyser. It erupts up to 15 times a day and is gigantic, often reaching 30 m (100 ft) up into the air.

At first sight it is hard to believe that a native people has chosen this seemingly infertile location to settle. Nevertheless, this is the case, since here the indigenous Māori tribes throughout centuries have learned to take advantage of the geothermal energy. The Māori people living in the Whakarewarewa village have with time learned to exploit the thermal resources and use it in their traditional way of living. They use the hot pools for nearly everything: to bath, to cook and to heat their homes.

The Māori population have learned to cope with the natural forces and the unpredictability – and to adapt whenever it is necessary. The nature of the thermal activities and the environment changes all the time. New hot pools arise and others cease to exist. The same applies to the geysers and other sources. 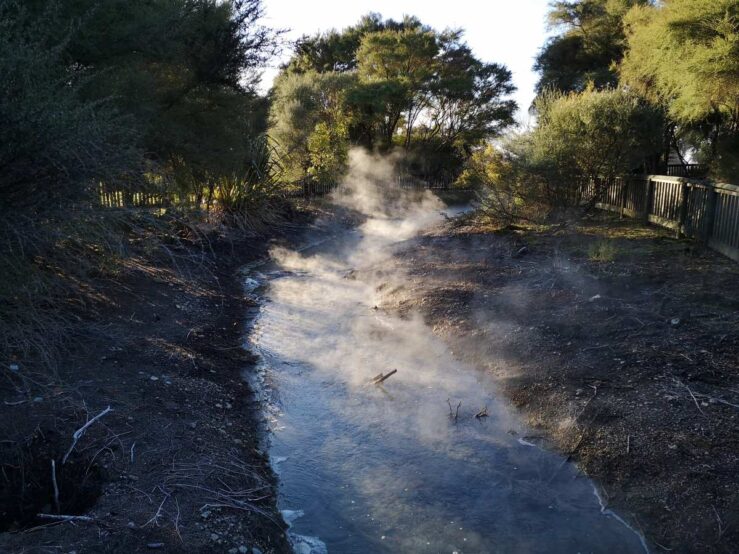 An example of a major change in recent times is the disappearance of the Pink and White Terraces – former natural wonders of New Zealand. They are the largest silica sinter deposits known to have existed on Earth. They were sadly destroyed in the eruption of Mount Tarawera in 1886.

2. Where to view the geothermal activity in Rotorua, New Zealand
Kuirau Park

To experience Rotorua’s natural volcanic activity and geothermal wonders, you can go for a stroll following one of the tracks in the area. The city park, Kuirau Park, is one of the central locations to view the fascinating thermal activity.

Already when approaching by road, you will see the steaming volcanic mist rising above the grounds. Well inside the park, you will now discover a whole range of the geothermal phenomena related to the volcanic activity.

Another option in Rotorua is to go for a walk along the lakefront of Lake Rotorua. In the middle of the lake you can see the small Mokoia Island, which can be visited by boat. 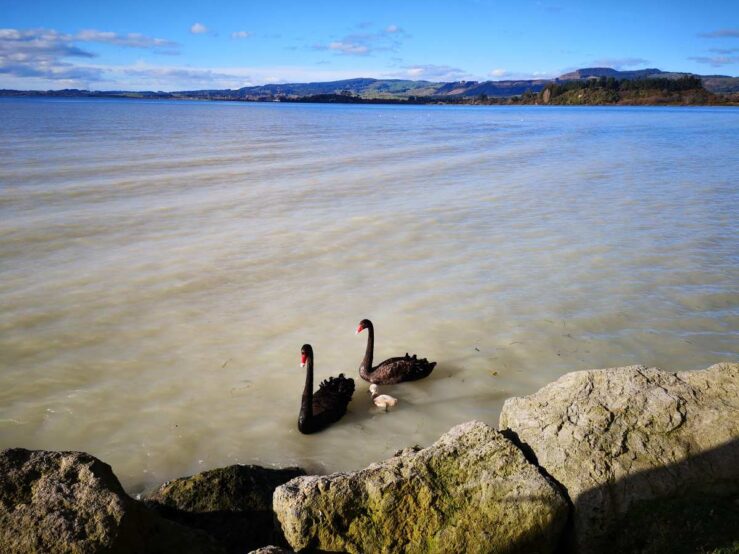 You will notice how the waters change character as you approach the Sulphur Bay. The bay has a unique wildlife of water birds having adapted to the special conditions here. Sulphur Bay is right on top of an active geothermal field! The water is pretty acidic and low in oxygen. It is a true wildlife refuge with many roosting and nesting birds. Do stay on the paths at all times since the ground beside them can be both boiling and toxic – it is absolutely forbidden area!

The milky colour is caused by sulphur particles from the hydrogen sulphide gas rising from the seabed.

It was also here that a ‘laughing gas pool’ previously was detected. The gasses produced the same effects as the known laughing gas, when people were bathing in it!

You may also visit one of the small Māori communities, for instance the Whakarewarewa village, to learn about the Māori culture and how they have come to live in harmony with the natural forces and exploit the geothermal resources. Here you will be able to view the Rotorua mud pools, geysers, hot pools, steam vents and much more.

To get a hot mineral waters experience, you can try the Polynesian Spa located close to Sulphur Bay. Here the slightly acidic and alkaline natural mineral springs feed into 28 mineral pools for a unique spa experience.

Read next: Explore Sydney in 4 Days and 15 Cool Things to Do in Melbourne

Hotels in Rotorua
Do you need a hotel in Rotorua? Check out hotel availability in Rotorua here!

Rotorua New Zealand – Can You Smell It: