↓
GERMANY  The Romans played a major role in the foundation of Trier in Germany. In the Roman colony, a city structure was established with an amphitheatre, imperial baths, as well as gates as entry points to the city. One of these is Porta Nigra – a gate that is astonishingly well preserved.
Ainnelise Niyvold Liundbye
This page has affiliate links (if you purchase through our links, we get a small commission at no extra cost to you - thank you!), see our Privacy Policy & Disclaimer.
The Romans in Trier, Germany

-> Where to stay in Trier

Trier in Germany with the renowned Porta Nigra has a historical background and important cultural heritage that can be traced back to the ancient Roman Empire. The city obtained the rare status as being one of the most important cities beyond Rome.

In 1986 the Porta Nigra was designated a UNESCO World Heritage Site together with other well-known Roman buildings in Trier: the amphitheatre, imperial baths, the Roman bridge, Trier Cathedral, the Church of Our Lady and a few more.

Inspiration for Germany: Moselle Valley road trip and 5 cultural things to do in Cologne

Besides the Roman heritage, the university city Trier has many other qualities – it is today a vibrant and charming city where nearly all architectural styles from the last 2000 years are represented along the streets. Moreover, it is a great place to enjoy the little bistros and cafés – maybe accompanied by a glass of local wine produced at the vineyards in the rolling hills of the Moselle Valley.

Porta Nigra in Trier, Germany, rises majestically in the heart of the city. The ’black’ monument is famous for being the most well-preserved Roman city gate, not only in Germany, but in all the countries once part of the great Roman Empire. Moreover, Porta Nigra is the largest ancient city gate north of the Alps! 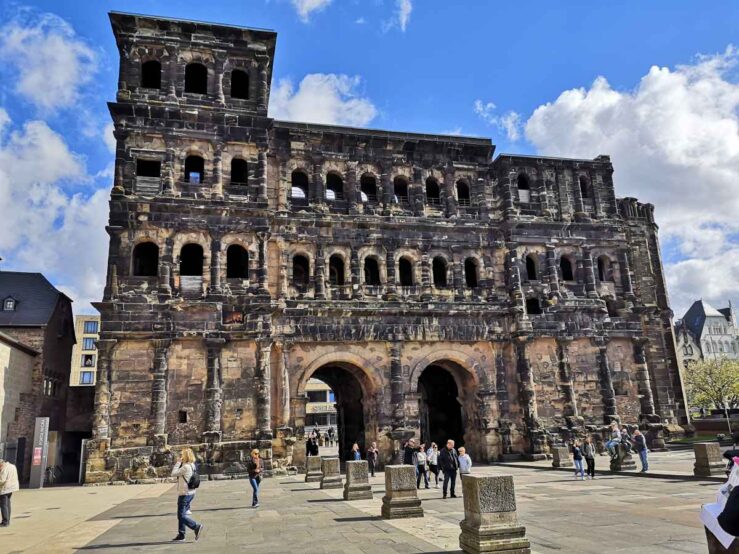 Originally, Porta Nigra had a Roman name, Augusta Treverorum, but it has not stuck to the gate. Instead, the darkened colour of the sandstone material has in the Middle Ages given the gate its current name, Porta Nigra, ‘Nigra’ (‘black’ in Latin) referring to the resulting colour of the monument.

Being founded in 17 BC, Trier is in fact Germany’s oldest city and it became a Roman colony from the 1st century AD. It was under the reign of the Roman Emperor Augustus that this imposing city gate was constructed.

The original Porta Nigra consisted of two four-storeyed towers with a courtyard in the middle. However, the construction was never fully completed.

Porta Nigra, the northern gate, was at the time one of four massive city gates around Trier – entry points along the 6 km long city walls. All gates marked the ends of the two crossing main streets of Trier. The three others were Porta Alba (White Gate) in the east, Porta Medie (Middle Gate) in the south, and Porta Inclyta (Famous Gate) in the west – unfortunately none of those have been preserved since they in the 13th century ended up serving as a ‘quarry’ for other constructions. 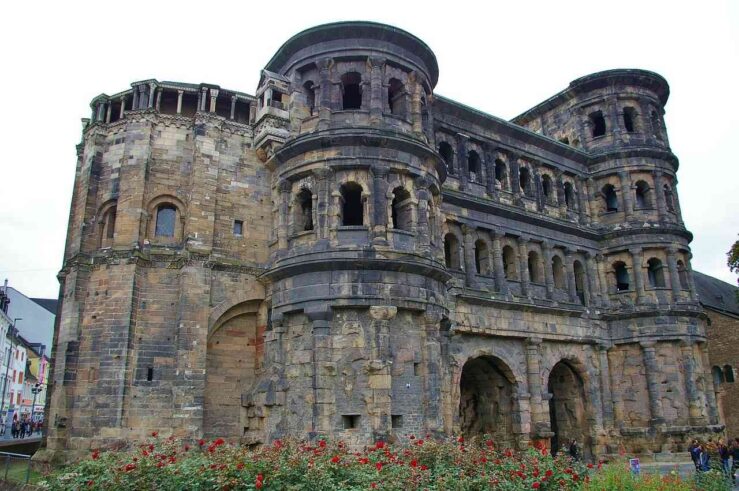 Soon Trier became one of the most important and largest Roman cities and the capital of the Western Roman Empire. The Romans erected a whole range of building complexes in the city. Besides the city walls and gates, they built as some of the most significant structures an amphitheatre in the hills of the Petrisberg, formerly used for performances, gladiatorial contests, animal fights and brutal executions, a solid bridge over the Moselle River, the great Aula Palatina, as well as the impressive Imperial Baths & Barbara Baths. In medieval times Porta Nigra was transformed into two identical churches, where the upper church was intended for the monks, and the lower church for ordinary people. An apse, more levels and a spire were added, as well as an additional gate, the small Simeon Gate.

Nevertheless, in 1802 Napoleon Bonaparte ordered that the gate construction was converted back to its original Roman appearance – with a few exceptions. The apse was for instance kept. The current Porta Nigra is very close to the transformation carried out by Napoleon. 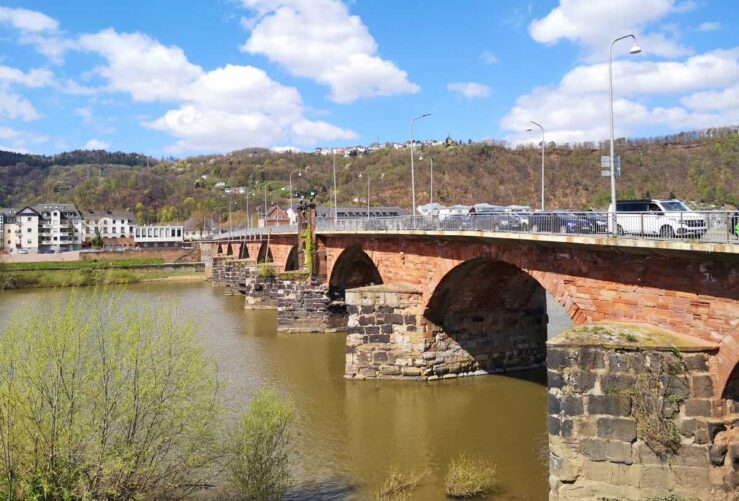 The Roman Bridge, or Römerbrücke, crossing the Moselle, consists of pillars that can be dated back to the 2nd century. They were built out of massive stone blocks attached to one another with iron clamps.

The upper part of the bridge has been replaced twice – the first time in the 12th century, and the second time in the 18th century.

To follow their customs of relaxing in a bathing establishment, the Romans constructed bathing complexes in Germany, so therefore Roman bathhouses such as the Barbara Baths and the Imperial Baths saw the light of day in Trier. 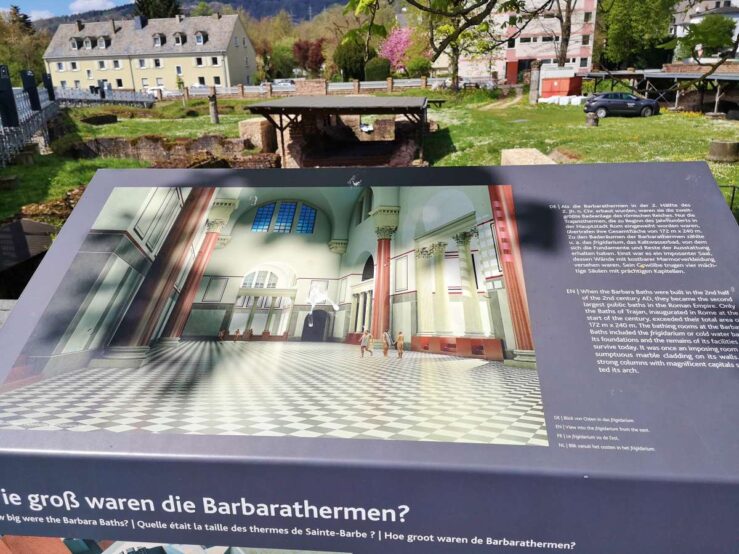 The Barbara Baths (Barbarathermen) are the oldest and also represent one of the largest bathhouses in the ancient Roman Empire – presumably the second largest. They had a sophisticated heating system with an oven under the floor producing hot air. This guaranteed a rather constant temperature around the baths. In addition to the hot baths there was a frigidarium – a cold water bath, as well as a large swimming pool.

The Imperial Baths (Kaiserthermen) were, contrary to belief, never completed nor used as intended as an Imperial bathhouse. When leaving Trier, Emperor Constantine II donated it to the population. 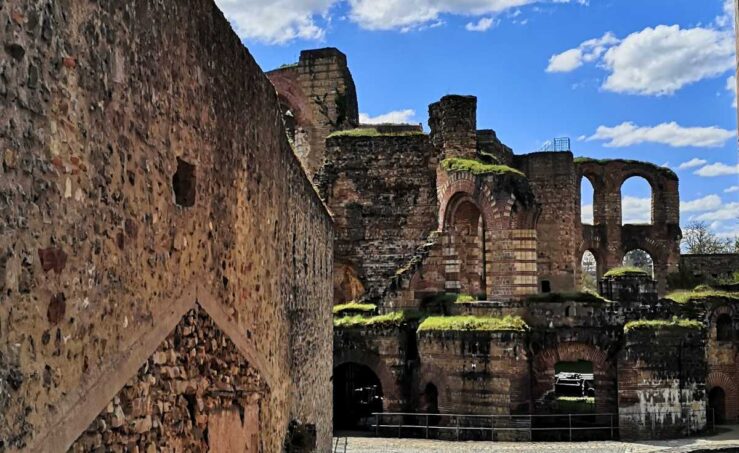 Aula Palatina, also known as the Basilica of Constantine, was a basilica commissioned and used by Emperor Constantine I around 300 AD. Originally, Aula Palatina was part of a palace construction in Trier, but only this building part has been preserved. 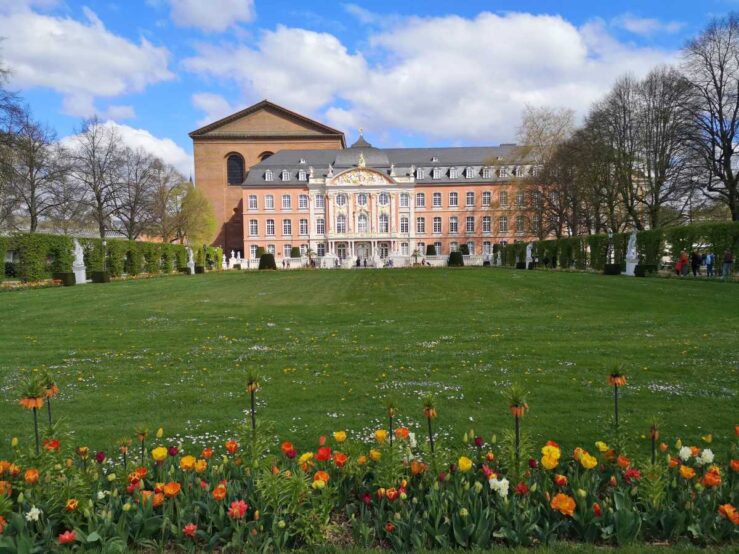 The Electoral Palace with Aula Palatina in the background | Photo: Travel In Culture

Later, during the Middle Ages, the Bishop of Trier used the construction as his residence. The adjacent Electoral Palace dates back to the 16th century and was connected to the Basilica of Constantine. Subsequent electors turned the palace into a Renaissance palace – and later the rococo style was included in the architecture. Right until 1794 did the bishops of Trier live here, but the French Revolution abruptly put an end to that.

5. Cathedral of St Peter & Church of Our Lady

The Cathedral of St Peter is built above the ruins of a former palace dating from the Roman era. In addition to its Roman-style interior, nearly all architectural styles can be identified – meaning that all European epochs have contributed to the design of the Cathedral. It is now the oldest church in Germany and with its three crypts, its cloister, the Treasury and Holy Robe Chapel definitely one of the highlights in Trier! The Cathedral also holds a number of tombs of the former archbishops of Trier. In its heyday there were notably four basilicas united here – in area covering quite a bit of central Trier. 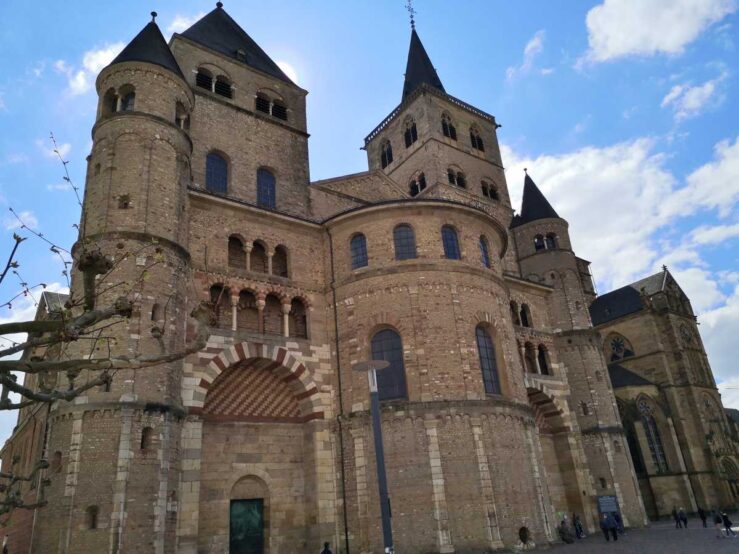 Cathedral of St Peter & Church of Our Lady | Photo: Travel In Culture

Adjacent to the Cathedral the medieval church from the 13th century, the Gothic Church of Our Lady, is situated. It has also been designated as a UNESCO World Heritage Site.

In case you want to gain more insight into the Roman culture than just seeing the ancient Roman architecture strolling around Trier, you may visit the Rheinisches Landesmuseum. It is a museum of Trier’s history, in particular the Roman era. Visit this museum to study Roman artefacts such as statues, coins and other Roman items excavated in and around Trier.

In order to know more about Trier from the Middle Ages onwards, you may also want to visit the Stadtmuseum featuring art and culture in Trier throughout the last 1000 years. 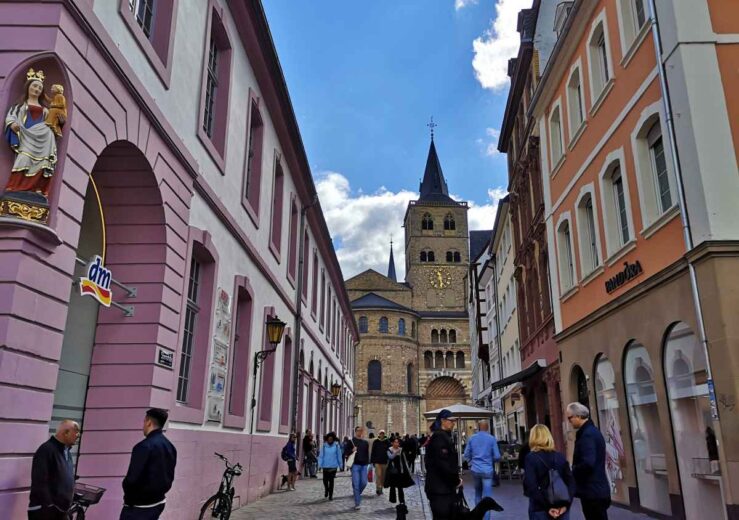 Trier is today so much more than its Roman heritage. Hauptmarkt is the vibrant central square where festivals take place. If you come at the right time, you will find market stalls selling vegetables, fruit, and flowers. It is a continuation of the location being a place of trade – which it has been right since the Middle Ages. Trier’s shopping streets all have Hauptmarkt as their focal point. Continuing down Fleischstrasse, you will arrive at the old grain market, Kornmarkt, which is today also a festival location. 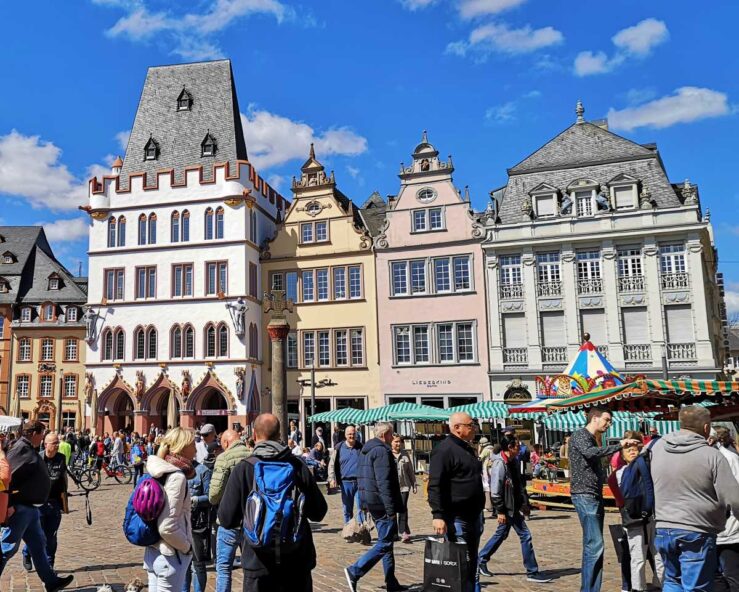 The Market Cross stands in the market square and has been there since 958 (although it is today only a replica – the original can be found in the Museum Simeonstift)!

Another landmark at Hauptmarkt is St Peter’s Fountain dating back to 1595. Atop the fountain you will spot Trier’s patron saint Peter. Likewise, century old buildings such as townhouses like the Steipe, the wine house with Gothic arches, medieval and Renaissance houses, St Gangolf Church, as well as the oldest pharmacy in Germany, adorn Hauptmarkt.

A famous house is the Gothic Dreikönigenhaus from 1230. An outstanding feature of this house is that it can only be accessed using a ladder, since the entrance is placed one level up – a security measure taken by the original residents! Anyway, there is unfortunately no longer any visitor access! 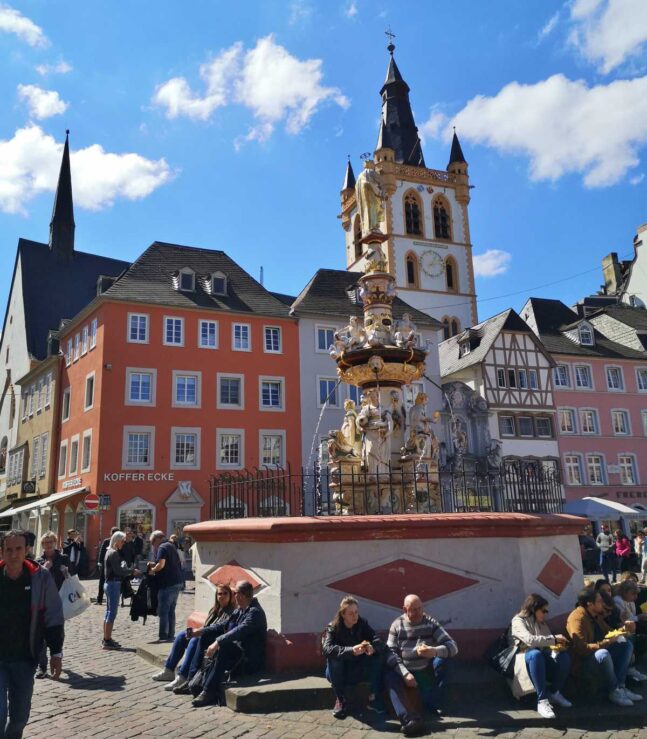 At Christmas you can experience the Trier Christmas Market which takes place precisely here around Hauptmarkt.

Another noteworthy place in Trier is Karl Marx’s birthplace which can also be visited. The Karl Marx House was back in 1947 opened as a museum of the life of Karl Marx.

When in Trier and the Moselle Valley you should of course indulge in a wine tasting experience from grapes coming from the Moselle’s riverside vineyards. The climate along the Moselle is mild enough for excellent wine production – and you will come across the Moselle wines everywhere in the region.

Read next: Schwalenberg – Where the Swallows Soar and Artists Thrive