↓
GERMANY  Arcaded passages and gabled Hanseatic building façades date back to the flourishing days when wealthy merchant families made their mark on Münster in Germany. Münster is full of century old history, art, architecture and churches – why does one have three hanging iron cages?
Ainnelise Niyvold Liundbye
This page has affiliate links (if you purchase through our links, we get a small commission at no extra cost to you - thank you!), see our Privacy Policy & Disclaimer.
Table of Contents

-> Where to stay in Münster?

Münster (also known as Munster or Muenster) in Germany is a gem of an old Hanseatic town dating back to the Middle Ages. There are still families in town that can be traced back to the merchant families flourishing here centuries ago.

The university city is rich in museums, churches and architectural styles, and a stroll along the pedestrian street will reveal secrets and details from Münster’s fascinating past.

Inspiration for Germany trip: Berlin in 3 days and Hiking, Brocken Witches & More in the Harz 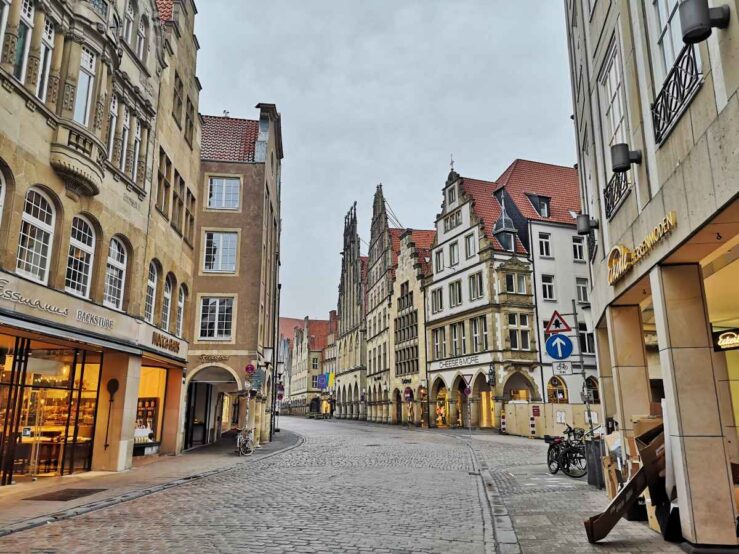 Prinzipalmarkt, the ‘main market’, is the ancient market street in Münster flanked by majestic historic townhouses dating back to the Middle Ages and the Renaissance in Germany. The most significant buildings along the marketplace include the City Hall, St Lambert’s Church, the Townhouse Tower, as well as numerous guildhalls, impressive columns and archways telling the history of Münster.

In the Hanseatic times Münster was a thriving trading centre, and prosperous merchant families ran their successful businesses from the elegant houses around the marketplace. The spectacular gabled houses were all uniquely designed.

Although the 12th- and 13th-century buildings were largely destroyed during World War II, they were essentially reconstructed back to their original appearance in the years 1947-1958.

Today the buildings in the old town of Münster have been converted into fashionable boutiques and trendy cafés, and the gabled houses and colonnades are still a vibrant and central part of Münster with its festivals and other activities taking place throughout the year. 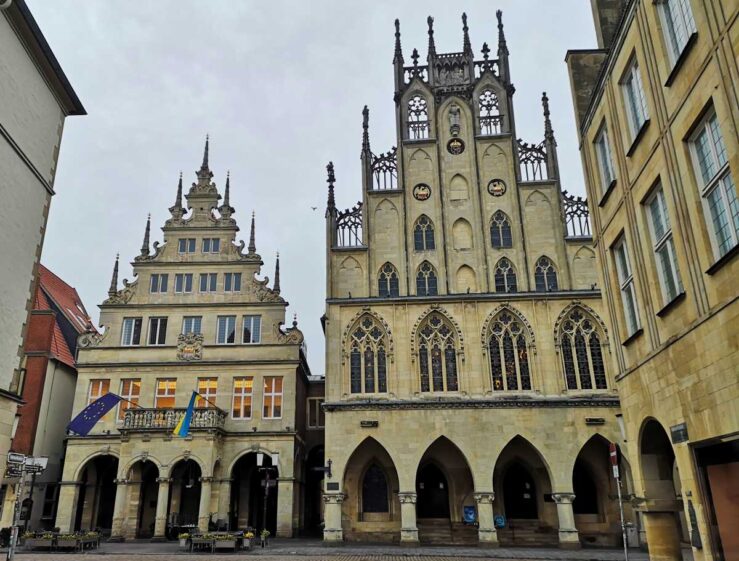 One of the outstanding buildings at Prinzipalmarkt is the Gothic City Hall (Historisches Rathaus) from the 14th century which has been awarded the European Heritage Label due to its uniqueness. Above its archways, the gabled façade and fine pinnacles rise and make the historical City Hall of Münster one of the most beautiful buildings of its kind in Germany.

This landmark is also a historic building since it was the site of the negotiations of the Peace of Westphalia / Peace of Münster (1648) bringing an end to the Thirty Years’ War in Europe where the Netherlands were declared an independent country. It took place in the Friedenssaal (Hall of Peace).

Today, the City Hall holds a collection of weapons, armour, flags and other historic items collected throughout the last centuries.

Next to the City Hall another remarkable building adorns the street, the City Wine House, in German the Stadtweinhaus, where the wine supply was stored. This magnificent house was erected a few centuries later, in 1615, by Johann von Bocholt. 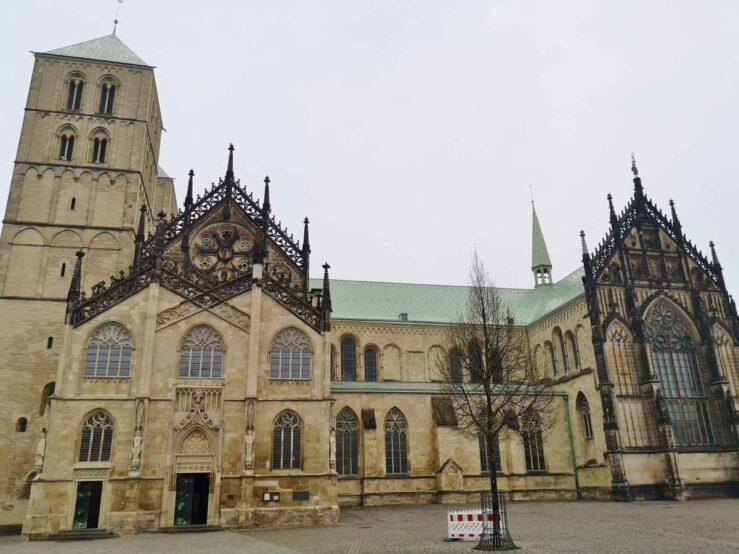 Münster Cathedral, also known as St Paulus Dom, is the Cathedral of the catholic Diocese of Münster in Germany. The Cathedral has a central location in the city between Prinzipalmarkt and the river Münstersche Aa.

St Paulus Dom is the third church construction on site since there have previously been two other cathedrals at this location, the Ludgerus Dom, 805-1377, and another cathedral erected in the 10th or 11th century. St Paulus Dom saw the light of day between 1225 and 1264, including the Romanesque westwerk from the second cathedral into the current structure in the new Gothic style.

Due to its history St Paulos Dom has a blend of distinct architectural styles.

Besides the porch (the ‘Paradise’) with sculptures of the 12 Apostles and the statue of St Christopher, you will notice the 16th-century astronomical clock that displays the time, the position of the sun, the planets, as well as the calendar. 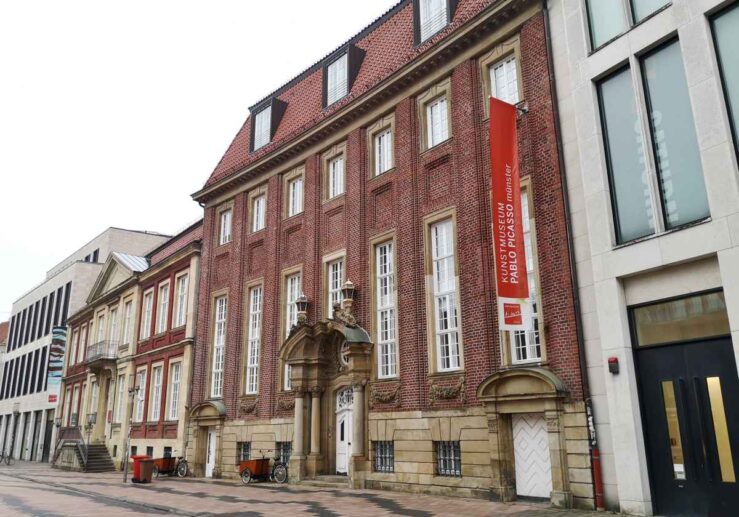 The Picasso Museum in Munster is the best in Germany | Photo: Travel In Culture

The Kunstmuseum Pablo Picasso in Münster opened in 2000 and is the only museum in Germany primarily devoted to Picasso, although it also holds paintings / artwork by world-famous artists such as Marc Chagall, Georges Braque, as well as Henri Matisse. The museum often features masterpieces on loan from international collections, museums and art galleries.

Within the permanent collection and the changing special exhibitions, over 800 fine Picasso lithographs can be found, besides numerous linocuts and rare test prints.

Through a guided tour you will gain broad insight into the work and life of Pablo Picasso – all on display in the 600 square metre museum space behind a strikingly beautiful classical façade in the heart of Münster’s old town. 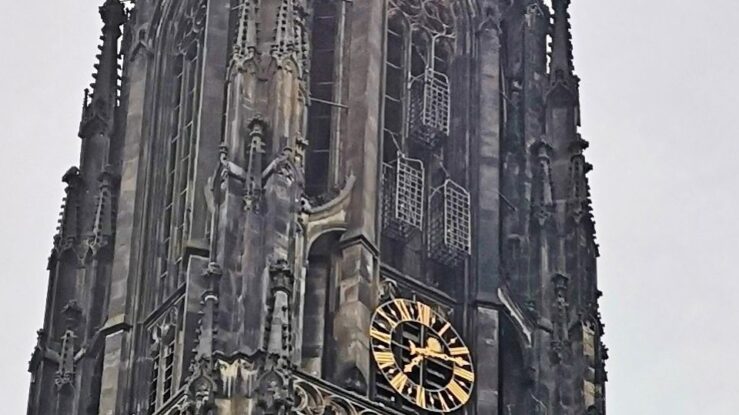 The Catholic St Lambert’s Church in the heart of Münster was built in the 14th century in the Gothic style, and St Lambert’s is an outstanding example of the Gothic architectural style prevalent in Germany at that time.

Real spectacular are the three hanging iron cages on the spire just above the Münster church clock. Today empty, but a five hundred years ago they contained the corpses of three revolutionaries who were the leaders of the movement of the Protestant Reformation ‘Anabaptism’.

As leaders of the rebellion, Jan van Leiden, Bernhard Krechting and Bernhard Knipperdolling ended in 1536 up being tortured and executed at Prinzipalmarkt.

After execution the three rebels were displayed in public dangling from the church tower in coffin-size cages for everyone in Münster to see. The bodies remained there exposed as a warning to others for 50 years! 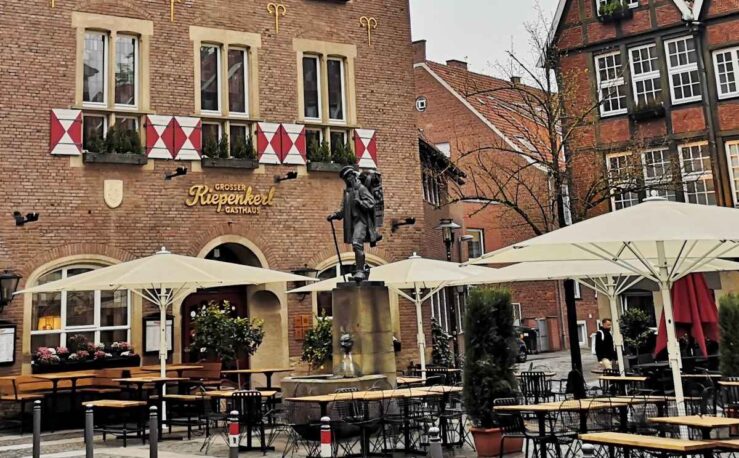 The story of the Kiepenkerl, a travelling merchant carrying a basket, goes back to 1896 when the original statue was carved from sandstone by August Schmiemann. Sadly, this statue was destroyed in World War II by a US tank – although it at first – as one of the few things – had survived the burning down of the town.

Its bronze replacement, the new statue of the Kiepenkerl with his basket of eggs, potatoes and rabbits swung around his back, was inaugurated in Kiepenkerl Square in Münster’s old town in 1953. The replica was created by Albert Mazzotti Jr as a symbol of the will to survive! 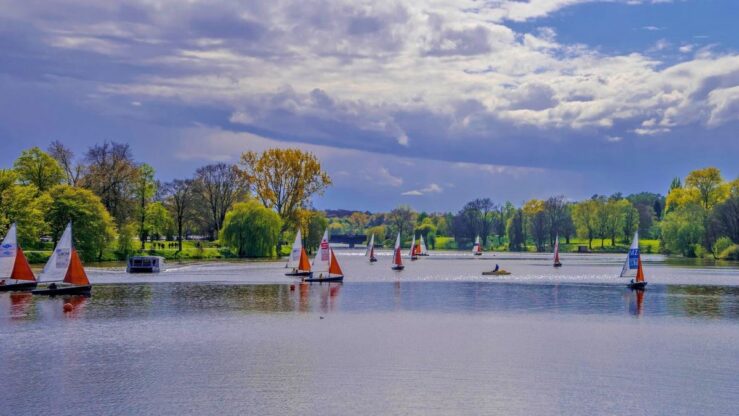 Ten minutes’ walk from Prinzipalmarkt you will find the pretty lake Aasee which is the ideal place to chill in Münster – either going for a stroll in the surrounding park, visiting the zoo, or by boat on the lake itself. In 2009 the park awarded a prize for being Europe’s most beautiful park.

With both sailing clubs and boat rental service there are a wide range of options to get onto the lake and enjoy a splendid summer day on the water of Aasee.

Taking a stroll along the lake is also like exploring an open-air gallery since there are numerous sculptures created by international artists along the lake shore to admire. They have been left here after the sculpture exhibitions taking place from 1977 to 2007. It is also popular to arrange a picnic in the park, get a bite to eat or have a cup of coffee in one of the restaurants or cafés located nearby.

Going to Cologne? Then read 5 Cultural Things to Do in Cologne

Read next: Hiking in the Bavarian Alps

‘Things to Do in Munster/Muenster, Germany – See the Church Cages’ 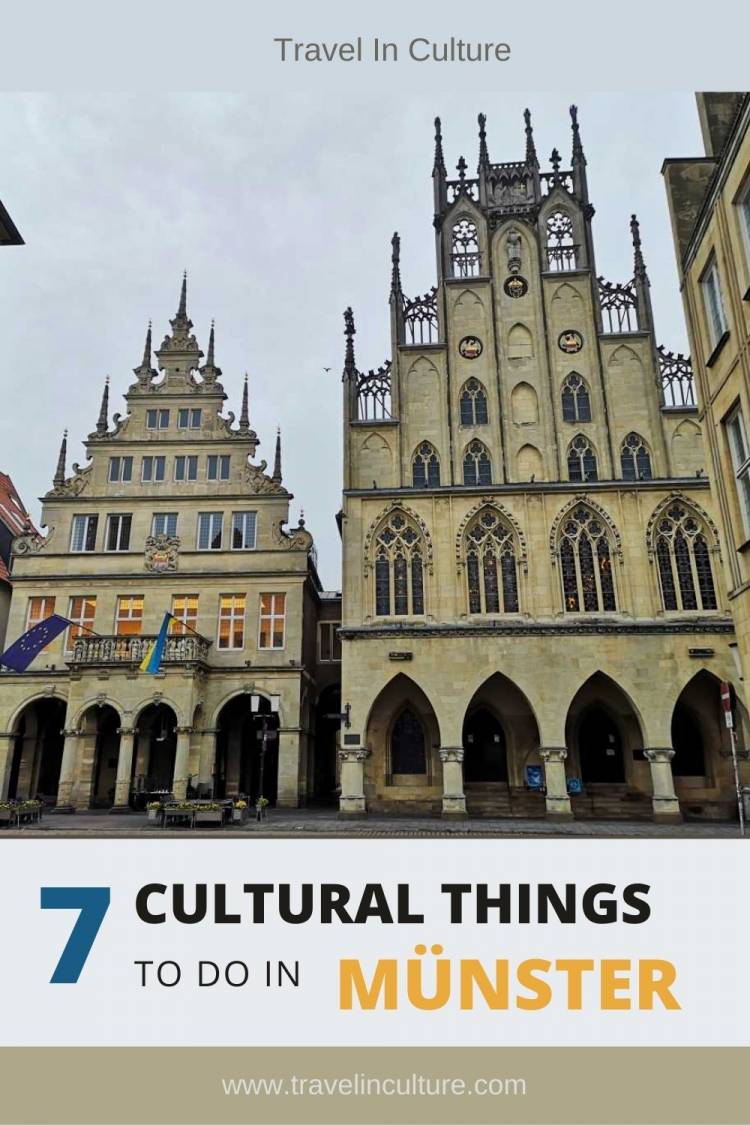 7 Cultural Things to Do in Münster/Munster/Muenster Germany:

Things to do in Münster / Muenster / Munster Germany