↓
NORWAY  Roros or Røros in East Norway is rich in old mining culture and industry. The place covers around 300 years of fascinating copper mining history, and with its extremely well preserved wooden houses it is today unique in the world. It is one of the outstanding UNESCO World Heritage Sites and authentic places to visit in Norway.
Ainnelise Niyvold Liundbye
This page has affiliate links (if you purchase through our links, we get a small commission at no extra cost to you - thank you!), see our Privacy Policy & Disclaimer.
Table of Contents

Approaching Røros from the north, you will be driving along a beautiful sloping landscape in a mountainous region that will soon give you a feeling of being in the middle of nowhere in Norway with no specific places to visit. For a long time you will only see forest, hairpin roads and signposts which warn against wild animals. You may actually suddenly – and unexpectedly – spot a moose or a couple of reindeer!

Eventually, you arrive at Røros, the somewhat isolated town in East Norway – far from the most common tourist stretches of road along the West Coast. Although much less known than Bergen, Oslo and Trondheim, Røros does, though, have a lot to offer, especially if you are interested in old Norwegian culture and mining history. 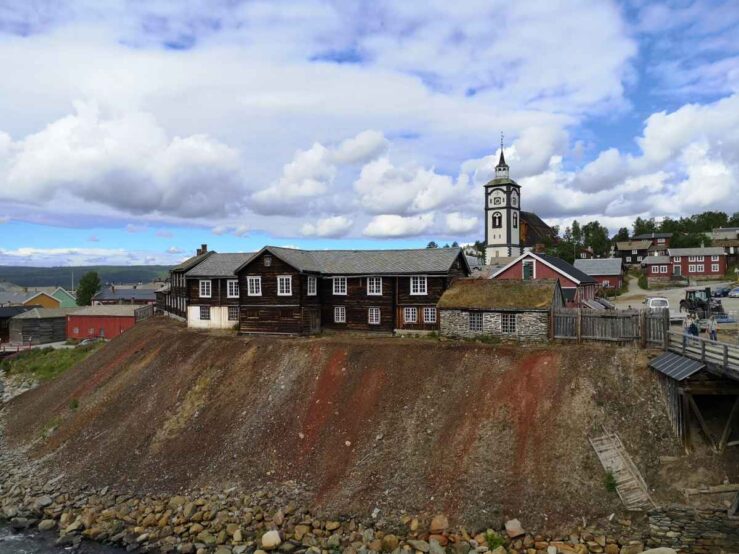 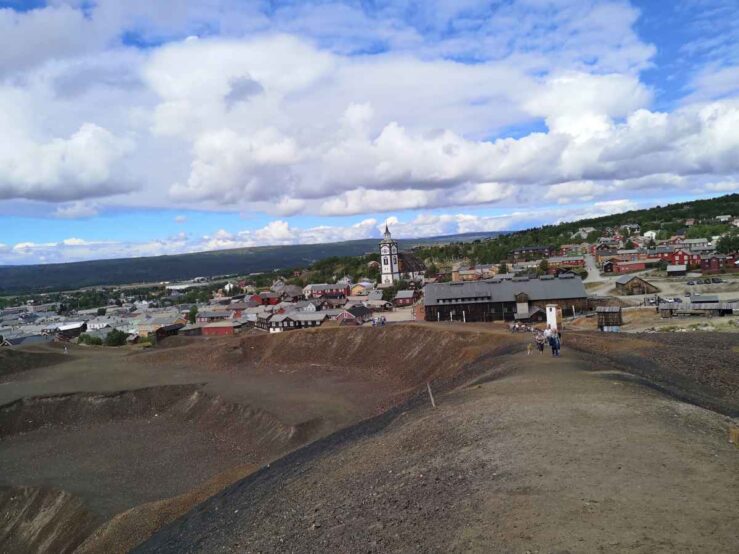 Places to visit in Norway: Røros | Photo: Travel In Culture

Already in 1644 a copper ore was detected in the Røros mountains in East Norway. Just two years later the Danish-Norwegian King Christian IV gave permission to utilise the natural copper resources in the area, and the Røros Copper Works saw the light of day.

The privileges included copper mining within a Circumference of four old Norwegian miles, corresponding to a radius of 45 kilometres from the initial mine, Old Storwartz. 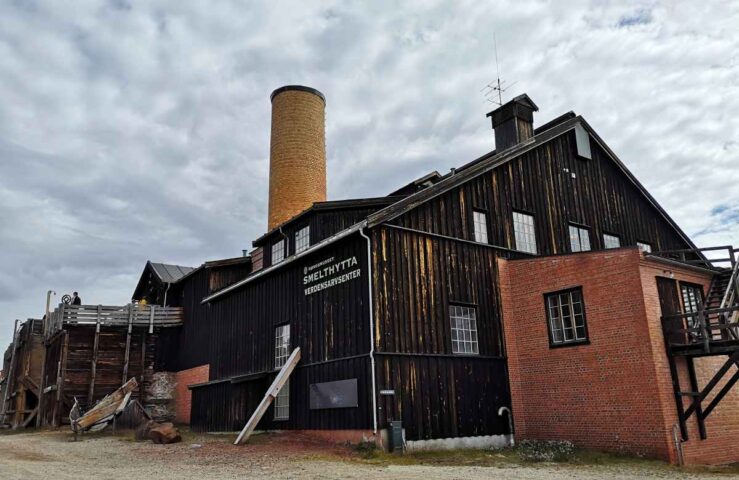 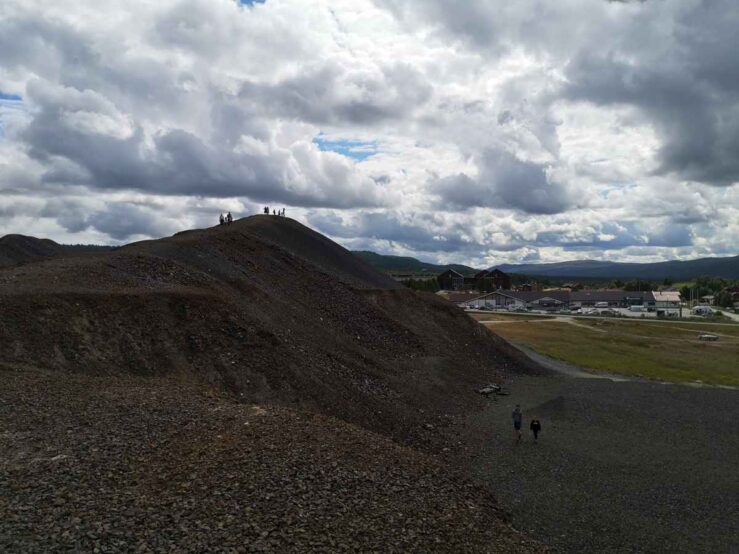 Røros mining town was now established by the waterfall of the Hitterelva River, location of the first furnace.

The surrounding land was not originally a fertile agricultural area, but a mountainous region covered with forest. The mining workers and inhabitants of Røros therefore also had to do farming as a second occupation to provide themselves with agricultural products, and having livestock became usual in the small mining town. 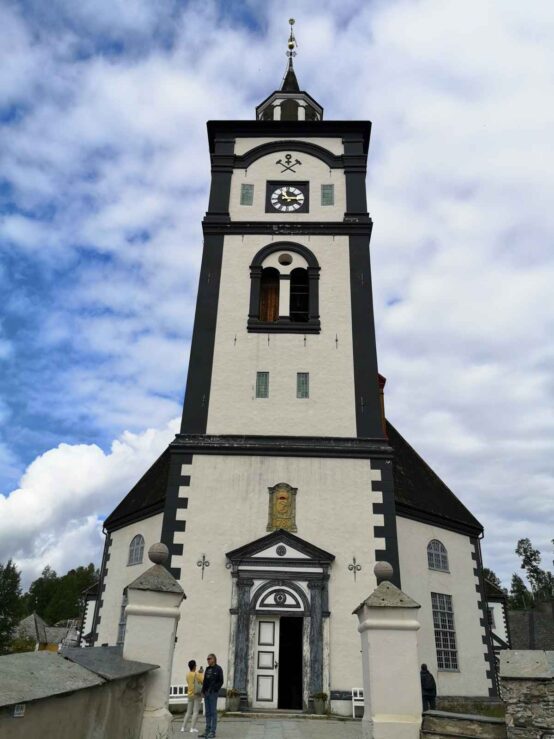 Røros Church was constructed in 1780-1784 as the town´s pride (known as the Ziir), today the fifth church by size in Norway. It was founded by the Røros Copper Works and designed by the Norwegian architect Peter Leonard Neumann from Trondheim.

The church has a light blue interior and decor. Inside the Church, you will notice the links to the Røros Copper industry: the logo of the Copper Works, paintings of the first manager, as well as of the manager in charge when the church was built. 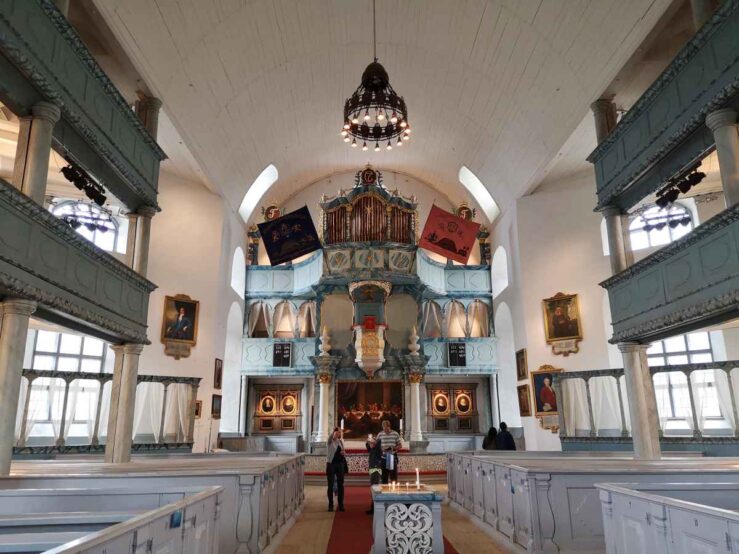 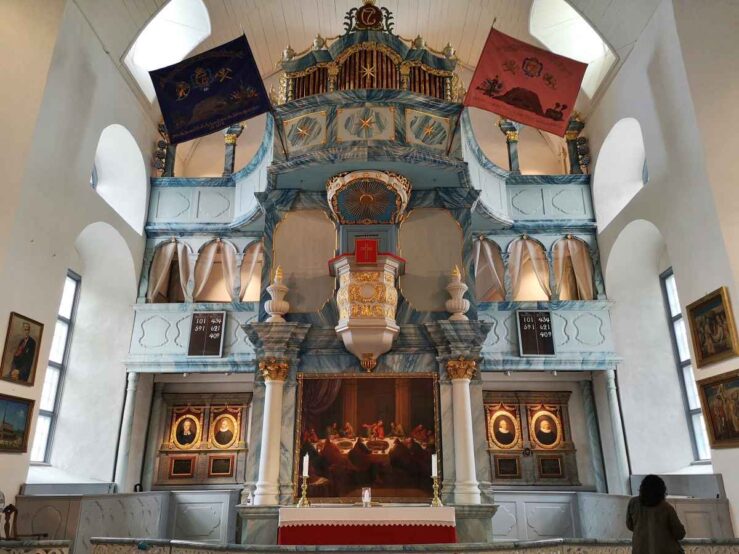 Røros Church features both seats for the Royal family and for the Copper Work management. The church goers were in general seated according to rank. The most prominent people sat in the first row and the poor people stood in the upper galleries – accessed only by the exterior stairs. Today, the church is still in use, and it is a popular concert site!

At the time of inauguration, the church counted 1,600 seats! It now ranks as the fifth largest church in Norway! 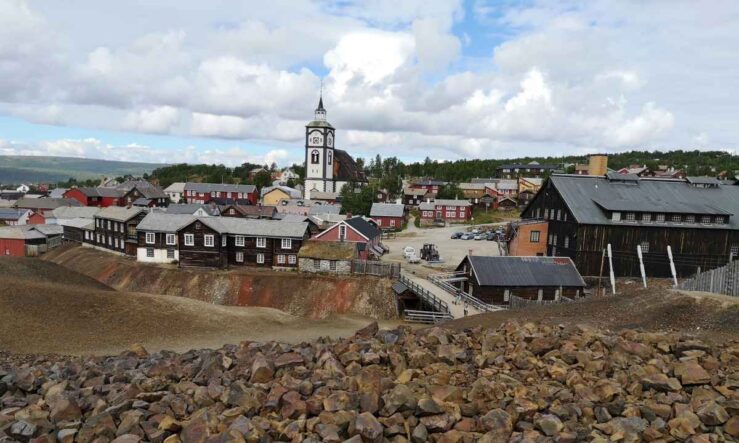 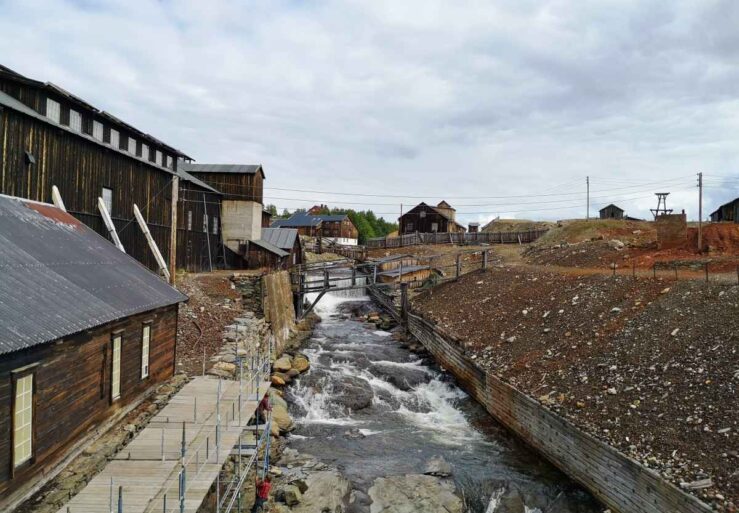 It is absolutely unique that so much is preserved of the old mining town and that it today still has got so much authentic character. At this location in Norway you can visit both the Olav’s Mine, a mining museum, as well as climb the enormous waste heaps at the end of Slaggeveien. It has, not surprisingly, become a UNESCO World Heritage Site consisting of its historic houses, the Church and Copper Work buildings, smelters, charcoal pits, old cableways, as well as farming structures. 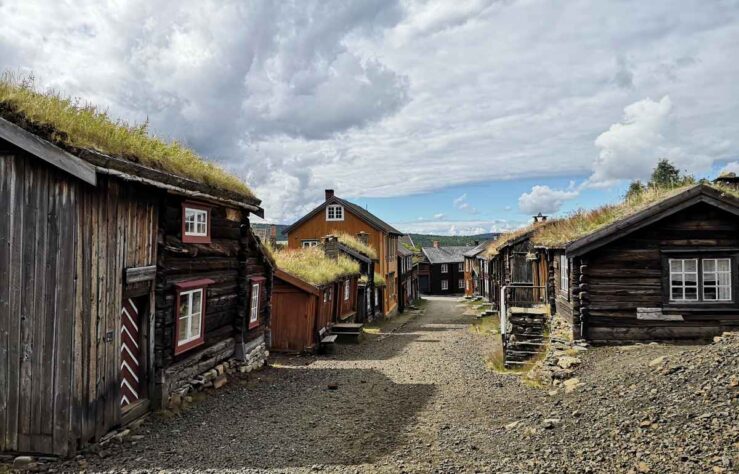 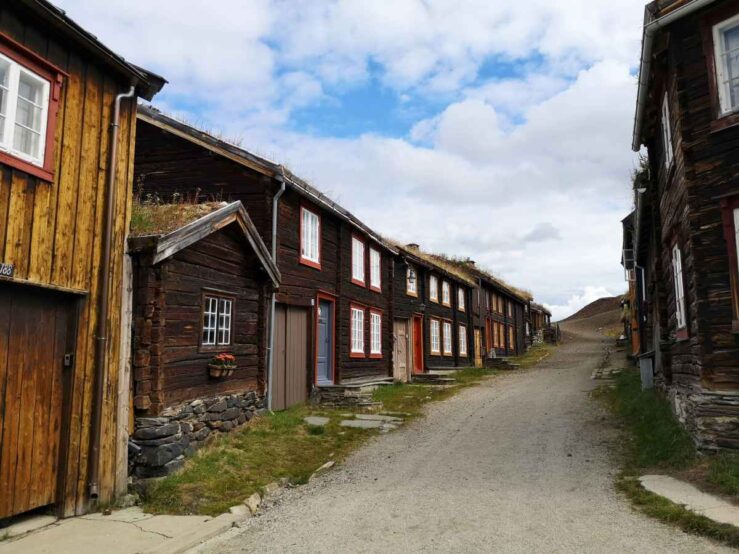 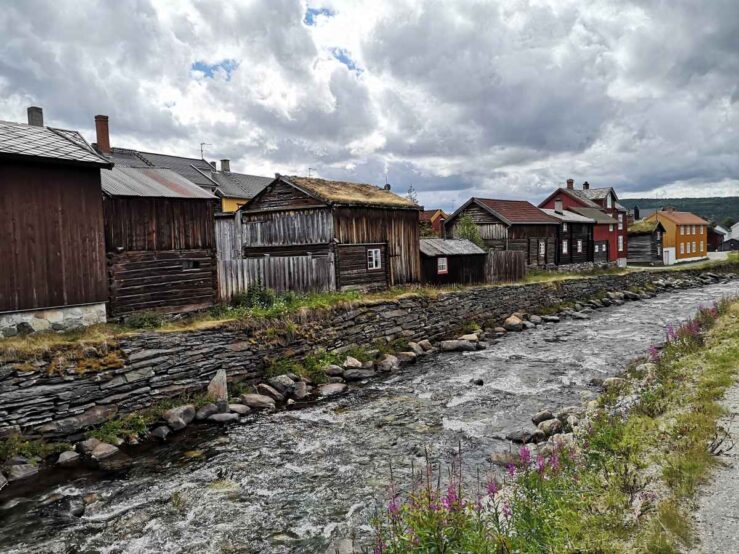 Things to do in Roros Norway: Visit the old mining town | Photo: Travel In Culture

In 1678 and 1679 the town was set on fire by the Swedes, but since then many houses have been restored in their original style. This means that today a considerable number of houses from 1700s and 1800s still stand.

At the time of the thriving mining town, the forest around Røros was little by little removed. In its heyday the trees were gradually utilised as fuel for the ovens.

Anyway, you will today find other forests near Røros which are now home to reindeer, moose and other wildlife. The Røros region in Norway features a lot of great spots to visit and for hiking.

2. Hotels
Where to stay in Røros
Advertisement
Vertshuset Røros is an apartment hotel housed in a 1914 building, centrally located and close to Roros Station and town museum. All rooms have private bathroom, private parking and free WiFi.

Røros Hotell – Bad & Velvære is a hotel where all rooms feature a seating area, minibar, free WiFi and modern décor. The hotel has a restaurant and a lobby bar and is located just a short walk away from Roros town centre. 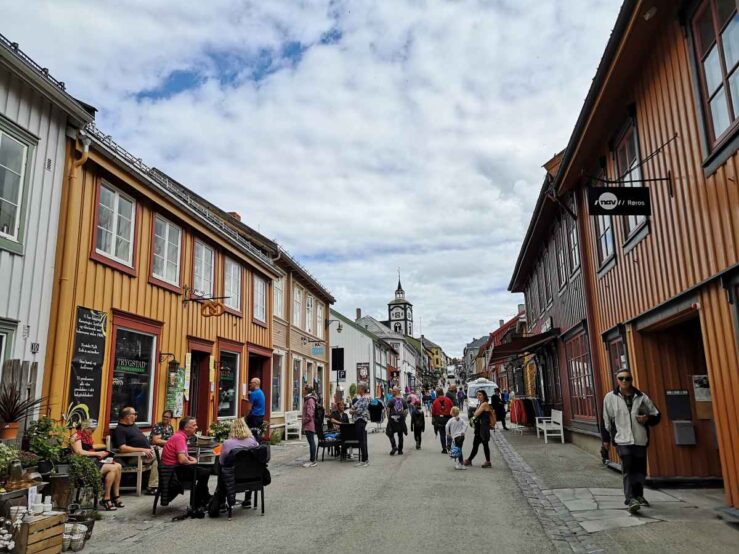 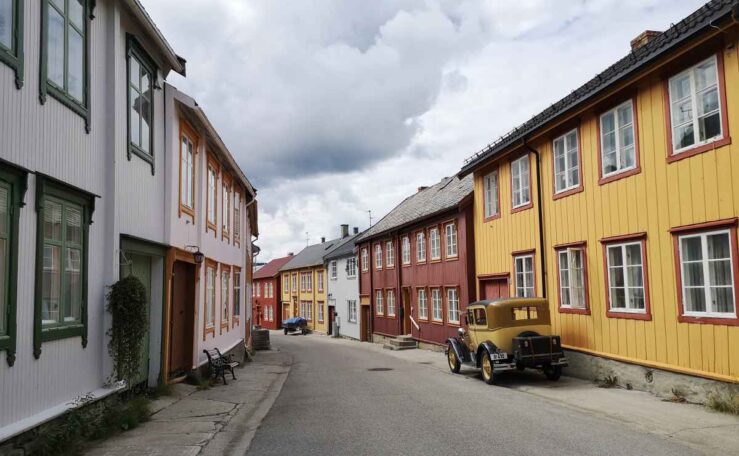 As an interesting fact Røros is one of Norway’s and the world’s coldest places with a temperature record as low as -50.4 degrees Celcius!

Going to Oslo? Then read Travel guide to Oslo

Read next: Explore the Lofoten Islands and Going on the Hurtigruten cruise ship MS Nordnorge 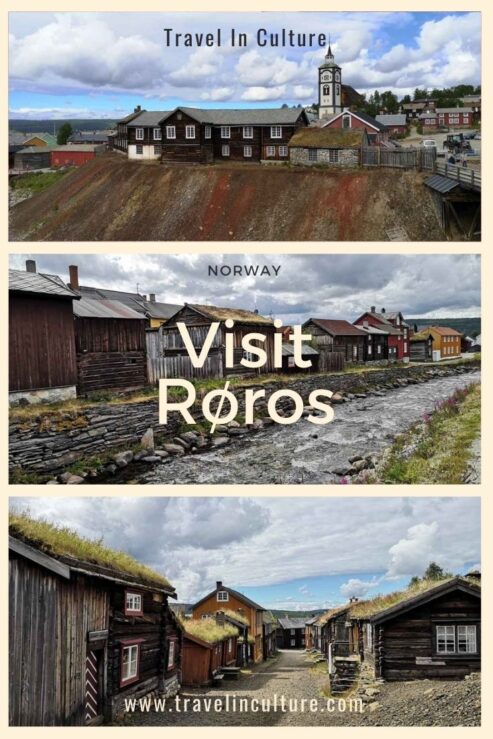 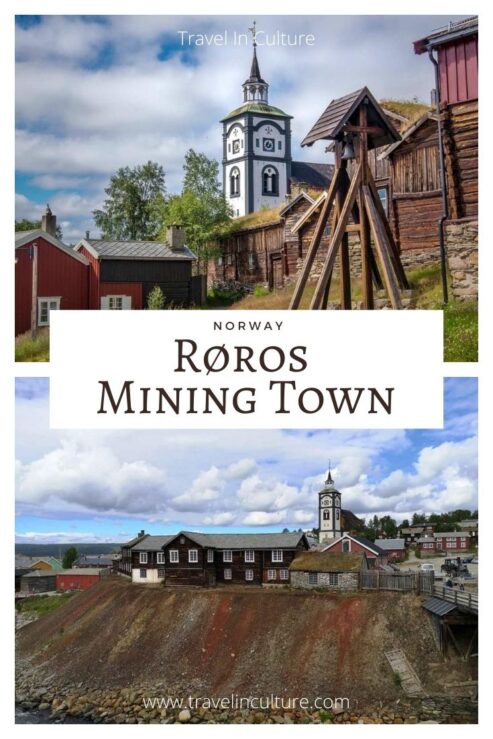 Featured image of
Roros Mining Town – One of the Top Places to Visit in Norway:
Einar Storsul / Pixabay