↓
NORWAY  One of the highlights of the southbound trip on MS Nordnorge is our Lofoten visit – and the following cruise days in Norway where we enjoy the spectacular seascape and pass the Arctic Circle.
Ainnelise Niyvold Liundbye
This page has affiliate links (if you purchase through our links, we get a small commission at no extra cost to you - thank you!), see our Privacy Policy & Disclaimer.
Table of Contents

1. The Hurtigruten fleet
2. MS Nordnorge
3. Crossing the Arctic Circle at sea
4. Where to stay before and after the cruise

We have booked our tickets on Hurtigruten’s Norwegian website, where you can select the preferred stops along the West Coast (‘havn til havn’). This is the way to ‘customise’ a Hurtigruten trip – just like the Norwegians who use the ships such as MS Nordnorge as a means of transport to get from one coastal town to another – and maybe to cross the Arctic Circle! You can then combine it with flights, trains, buses or car to make the perfect Norway itinerary.

On this leg of our trip we have chosen to embark MS Nordnorge in Lofoten for the southbound voyage.

As we board the ship in Svolvær at the end of the day, the weather changes unexpectedly fast from bright and shining sun to a regular snow storm. Even if it is April, there are still moments of winter weather and snow in the air in the Lofoten Islands. 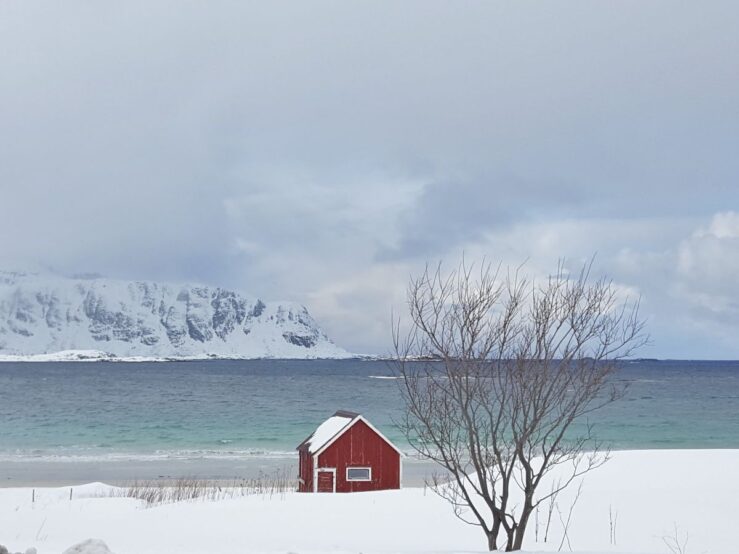 Inspiration for Norway: Tromso in 2 Days and 5 Historic Sites in Trondheim and Visit Svolvær & Lofoten Islands

The passengers now disembarking MS Nordnorge have appropriately dressed for more winter-like conditions with warm hats firmly pulled down over their ears and jackets zipped all up. They seem ready for some hours in Lofoten in real tough, stormy weather – probably not what they had hoped for. As far as we understand from the sporadic phrases we overhear when passing a few of them, some have booked a horse ride on the beach – will this now be possible?

We definitely consider ourselves lucky that we most of the time during our stay here om Lofoten could enjoy decent weather – even with moments of pleasant spring-like sunshine!

Going on a Hurtigruten cruise is an excellent way to enjoy coastal Norway! Actually the ships are used both as ferries between the small coastal communities and as fascinating cruise ships.

The Hurtigruten company was founded by the Norwegian ship captain, politician and businessman Richard With. With a profound wish to improve the infrastructure around the small coastal villages, until then all served by different ferry companies, he incorporated the routes into the Hurtigruten services.

The ships are still today being used by both locals for transport, goods delivery and postal service, and as cruise ships with passengers from near and far. The Hurtigruten fleet serves the Norwegian west coast and provides the passengers with a unique opportunity to experience and explore Norway from the seaside. Its route is both northbound and southbound along the Norwegian coast. 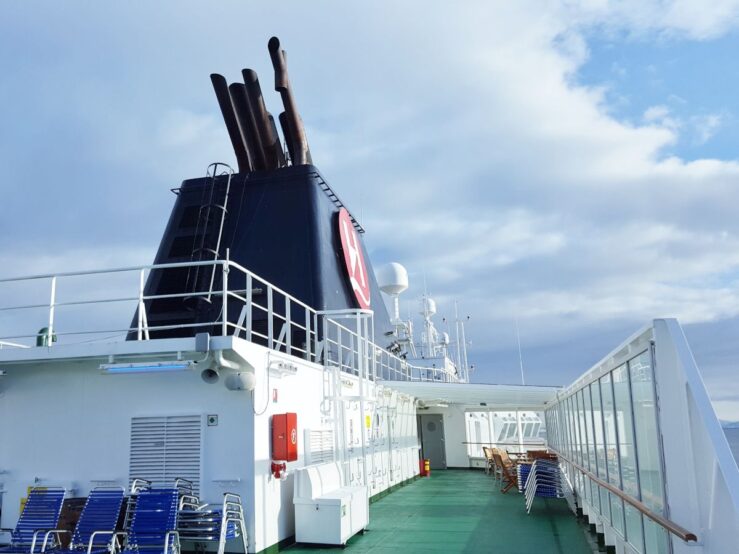 Due to receiving state subsidies, Hurtigruten has committed itself to serving all the small ports along the Norwegian west coast. There are therefore daily calls at all ports, such that you can embark and disembark according to preference and needs.

At the moment a fleet of 11 out of 15 ships operate up and down the coast. A few ships serve Svalbard as well. Likewise, Hurtigruten has during the last years extended its routes to comprise even more distant locations and have today cruise ships reaching as far as Greenland and Antarctica.

Passenger segments are supposedly a bit different on many of the ships! According to what we are told, it was most noticeable on the very old and legendary MS Lofoten from 1968 with traditional, primitive berths and not even any stabilisers. Anyway, it was recently taken out of the fleet. The interior was, though, in a class of its own with stylish wooden as well as leather furniture and polished brass. That, in particular, attracted a segment of well-travelled passengers who precisely sought this kind of atmosphere on board.

Aboard MS Nordnorge we are introduced to a variety of Norwegian specialities in the restaurant. The buffet features ‘fenalår’ (salted, dried and cured leg of lamb), reindeer, freshly caught salmon, dishes of stockfish and ‘bokna lam’ – another dish made from dried lamb. Among the desserts we find a goat cheese ice cream which, maybe a bit surprisingly, is absolutely delicate!

In the morning the breakfast buffet matches the quality of the dinner buffet and abounds with smoked and freshly marinated salmon and halibut as well as gravlax. It is all accompanied by colourful cucumber and raspberry smoothies.

MS Nordnorge is one of the modern ships which underwent an interior restoration in 2016. The ship has an expedition team on board who arrange excursions from the ports of call and give lectures on relevant subjects on board. Moreover, on deck just a few steps from our cabin, there is the coolest Jacuzzi! 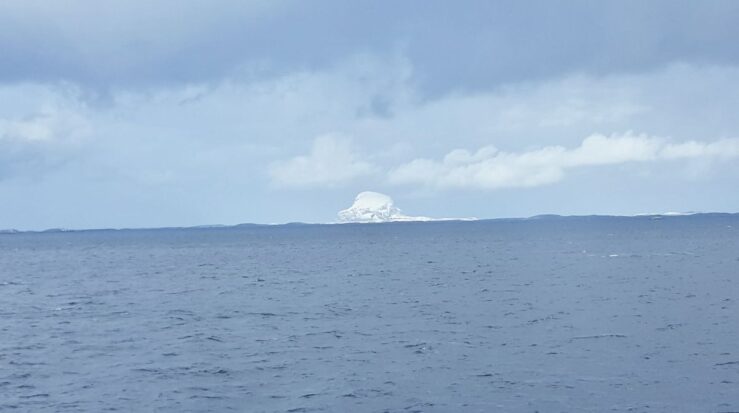 Our cabin is equipped with a flatscreen of considerable size on which we can follow the position and route of the ship. Additionally, we have from our bed a phenomenal view through the window to the islands and snow-covered mountains we pass. To complete the Arctic setting, we can use the ‘Arctic Purée’ at disposal in the bathroom to wash our hair in – maybe at least when we cross the Arctic Circle!

The weather is remarkably changeable in this region. One moment we experience the brightest sunshine and sensations of spring. The next, we need to put on thick layers of clothes to be adequately protected against the polar climate. In fact, we continuously change clothes on board. Solid winter boots, thermal underwear, woolen jumpers, hats and gloves are repeatedly replaced by indoor shoes and a somewhat lighter outfit for the lounges!

Our small rucksacks also include an appropriate shirt for dinner, although the dress code on board is utterly casual. A few passengers seem to have given priority to being elegant and stylish in the restaurants rather than warmly dressed on deck. We spot summer jackets, short skirts, and even bare feet and thin shoes on a few passengers outside in a lighter snow storm! 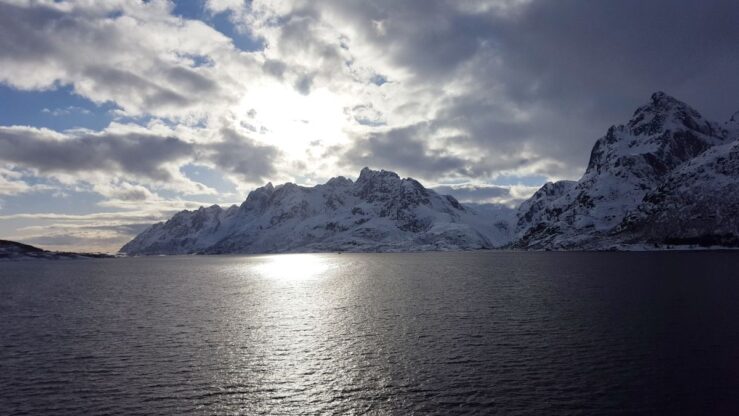 3. Crossing the Arctic Circle at sea

The changeable weather teaches us to take advantage of the good moments during the day for outdoor activities. When the sun appears in the afternoon, the Jacuzzis on deck 6 are popular – and ultrafast filled with passengers in bathing costumes … and hats! If you like, you can continue to the sauna afterwards.

One of the absolute highlights on the Norway trip is when we are crossing the Arctic Circle.

There have always been certain rituals related to crossing the polar circle. Polar baptism is an act for those who cross for the first time. To our great surprise Hurtigruten introduces quite another tradition to the passengers on the southbound voyage.

Well suited to the situation, we all of a sudden enter directly into a lighter snow storm, reminding all passengers of the northerly latitude. There is not much sight now, but we can just discern the marking of the Arctic Circle. Minutes later it clears up, and the symbolic monument is right there! 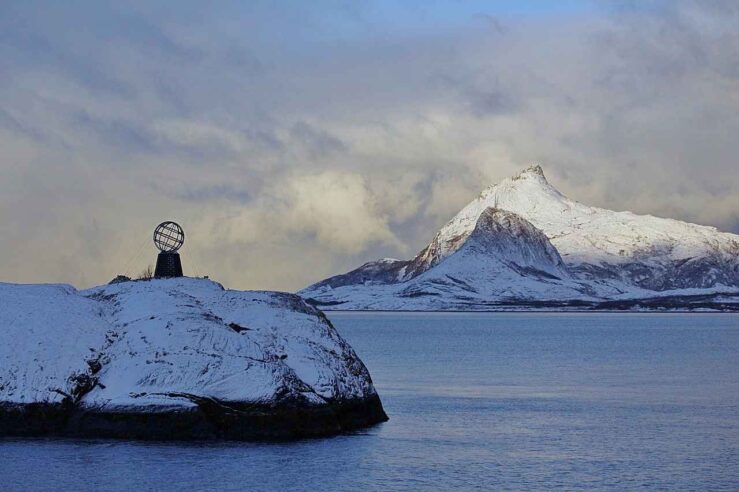 The specific location is clearly marked on a rock we closely navigate past – this is for a vast majority of the passengers a climax on the cruise. We probably have not seen that many people gathered on deck until today!

The crew now prepares a small ceremony on deck. They bring plentiful bottles of cod liver oil, so that everyone can get a spoonful. It is clear that this tradition evokes memories and even emotions among the passengers. Some look at it with disgust, whereas others approach out of mere curiosity.

This is an old Arctic tradition, and it is practiced now that we pass the polar circle.

The well-heeled can supplement with a glass of exquisite champagne to relieve the bitter aroma. The entire ceremony is accompanied by traditional, Norwegian tuneful music and catchy song. The crew has put on their polar hats, which are matched by a reindeer hat worn by one of the passengers, presumably just acquired on his Norway trip – the perfect outfit for crossing the Arctic Circle!

All courageous passengers can keep the special Artic Circle spoon, which each participant receives when lining up for the cod liver oil tasting – a fine souvenir from Norway!

4. Hotels – before and after the cruise
Where to stay in Bergen and Oslo
Advertisement
Bergen: Best Western Plus Hotell Hordaheimen is located in the heart of Bergen near the Bryggen Wharf and Torgallmenningen Square. The hotel offers a rich buffet breakfast.

Oslo: Karl Johan Hotel is located at the famous Karl Johans gate where it is housed in a 19th-century building and only 700 m from the Royal Palace. The Central Station is a 10-minute walk away.

Going to Oslo? Then read 9 Cultural Things to Do in Oslo

Would you like to go on a West Coast trip? Get inspiration here: Norway’s West Coast in 12 days 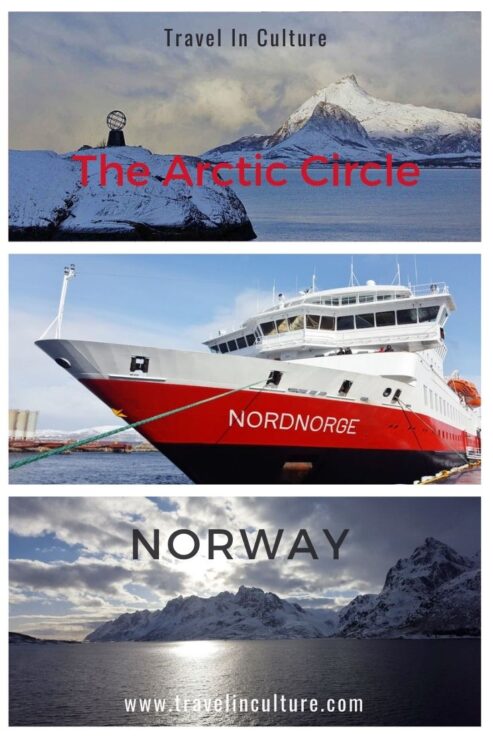 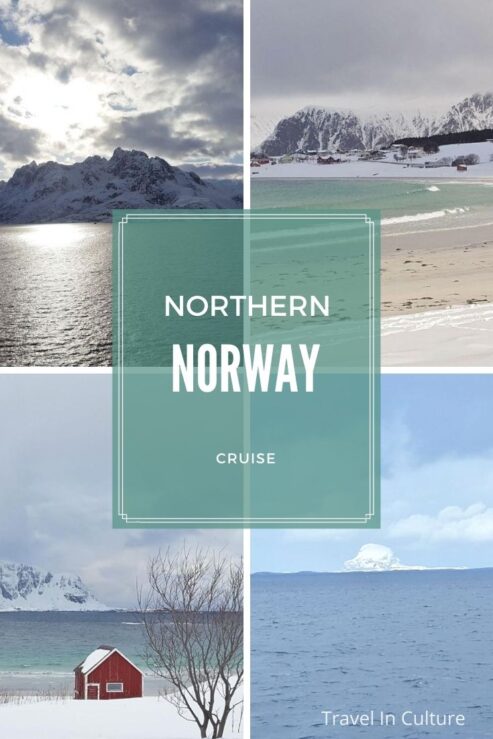