↓
SLOVAKIA  Which cultural things to do in Bratislava to cover the absolute highlights of the Slovak capital? The must-sees include, beyond of course the outstanding Bratislava Castle rising above the Old Town, the peculiar statues emerging here and there, scattered across the city, telling each their story.
Ainnelise Niyvold Liundbye
This page has affiliate links (if you purchase through our links, we get a small commission at no extra cost to you - thank you!), see our Privacy Policy & Disclaimer.
Table of Contents

-> Where to stay in Bratislava?

A number of communist era elements and landmarks are still visible in the Old Town of Bratislava from the time of the communist rule in Slovakia, although the city has undergone extensive development during the last decades. It has all resulted in a wealth of architectural styles dating to different time periods – and a mix of quirky old streets such as Kapitulská, Bratislava’s oldest street from the 1200s with 15 buildings on the list of cultural and historical monuments, and other more modern parts of the city including the iconic hanging minimalistic UFO Bridge (Most SNP Bridge) realised in the years 1967 – 1972, featuring a flying saucer-shaped restaurant and an observation deck that provides stunningly panoramic views over the Danube and the city of Bratislava. It is the 7th largest hanging bridge in the world! The cultural things to do in Bratislava include exploring its outstanding monuments, symbolic statues, as well as a spectacular castle overlooking the city.

Unarguably, the Slovak capital is full of hidden gems, remarkable sites and extraordinary things to see and do. There is a large number of historical buildings and landmarks to cover on a city walk through the Old Town of Bratislava – right from the original 14th-century city walls, beautiful churches, the cubist synagogue building (which is now the only remaining synagogue in the city) to cultural buildings such as the Slovak National Theatre, fabulous museums and stylish palaces. It is a small European capital with barely half a million inhabitants, but it possesses everything that a capital should have within culture, history and sights. Below you will find a description of nine spectacular cultural highlights to include in your Bratislava itinerary.

Inspiration: Day trip Vienna to Bratislava and What to See in 24 Hours in Vienna 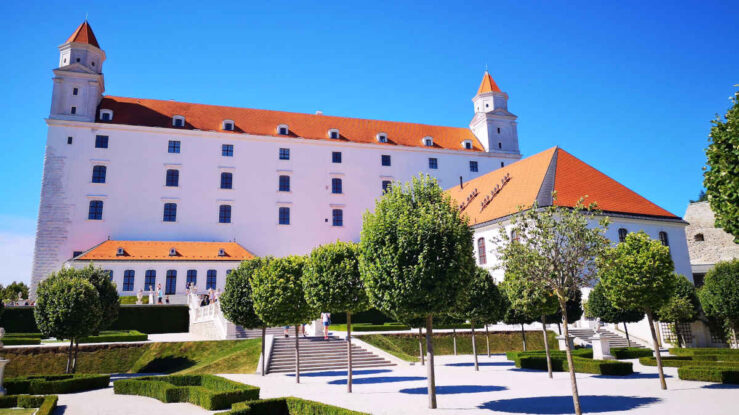 The top sight in Bratislava is without doubt the castle atop a hill, overlooking the city and the river – its fascinating skyline can be viewed from everywhere in the Old Town, as well as the surrounding areas.

The hill was populated already in the late Stone Age, and the first settlement here by the Celts was named ‘Oppidum’. It is also known from a battle between Bavarians and Hungarians in the 10th century, and since then the fortress was constantly further developed. The castle was continuously rebuilt in the Gothic, baroque and Renaissance styles in accordance with the reign, and was in the 16th century influenced by King Ferdinand – and later in the 18th century by Maria Theresa. Its current appearance goes back to the mid-20th century. 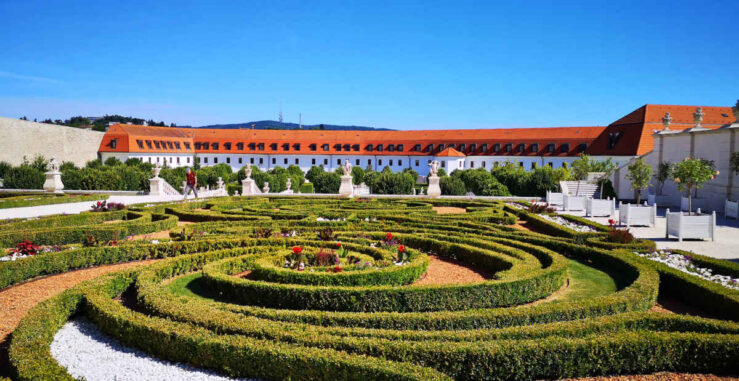 Bratislava Castle is today the seat of the Museum of History. Visitors can enjoy scenic views from the 47 m high Crown Tower in which the royal coronation jewels were formerly kept. 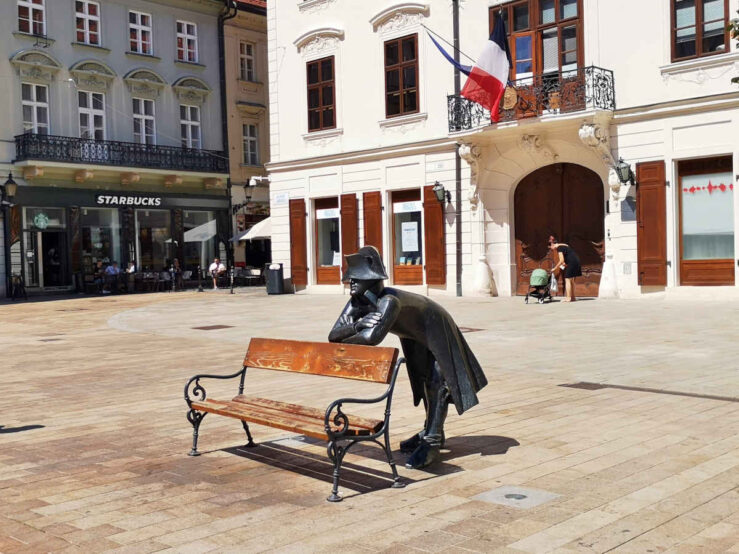 Bratislava is known for its eye-catching statues and monuments erected over the years in the city. Some are quite recent statues and others refer to the communist period in Bratislava and Slovakia – for instance the monument of two lions in Špitálska Street majestically guarding the headquarters of the StB Secret Police in the past. 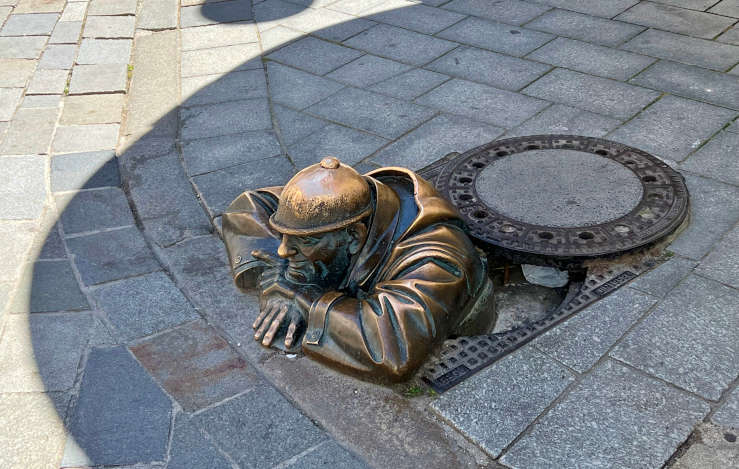 Some of the most popular statues in Bratislava are the characters scattered around the Old Town: Čumil (Rubberneck) emerging from a manhole in the street (designed by Viktor Hulík in 1997), a bronze statue of a Napoleonic soldier leaning on a bench (Juraj Melis, 1997) reminding people of Napoleon’s army visiting the city in 1805 and again in 1809, the Schöner Náci statue (Juraj Melis) commemorating the gentleman Ignác Lamár at the Main Square, as well as the Hans Christian Andersen statue from 2006 by the Slovak sculptor Tibor Bártfay. 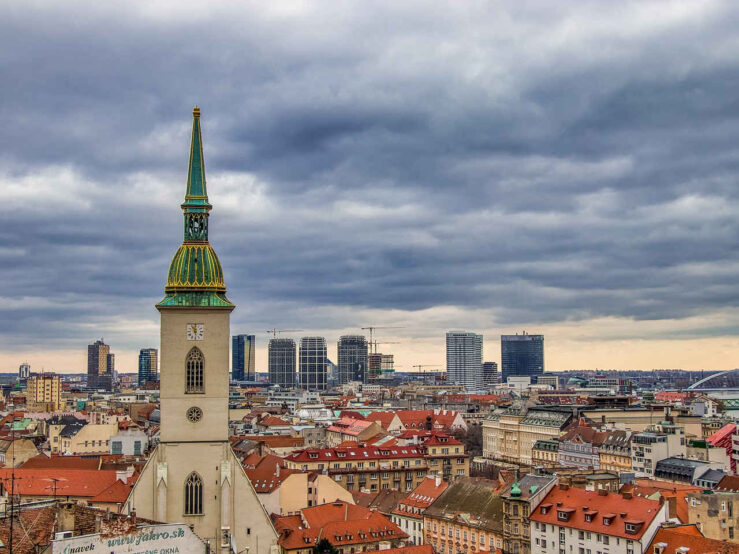 This is the largest and most noteworthy church that reached its heyday during the years 1563-1830 as the chosen coronation site of 18 Hungarian monarchs. At that time Bratislava was the capital of the Hungarian Kingdom and all coronations took place here. It features a gilded replica of the coronation crown atop the tower.

It is a three-nave Gothic church structure erected in the 15th century. As a curiosity the cathedral façade used to be part of the city walls, a detail you can still observe on the southern side of the cathedral. 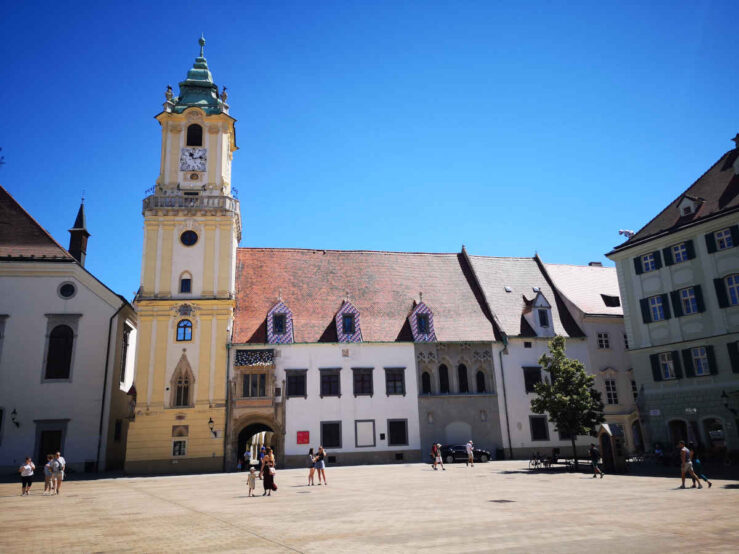 Dating from the 13th century, the Old Town Hall is the focal point at the Hlavné námestie (the Main Square). It consists of a number of historical buildings from different time periods. The oldest part is a Gothic edifice that served as the town hall in the 14th century. It was later extended into a complex in both Renaissance, baroque and neo-Gothic styles. At some point in time it was even the city prison!

Today, the town hall houses Bratislava City Museum which is the oldest museum in Slovakia. Visitors can climb the tower – and will be rewarded with magnificent views of picturesque Bratislava Old Town. 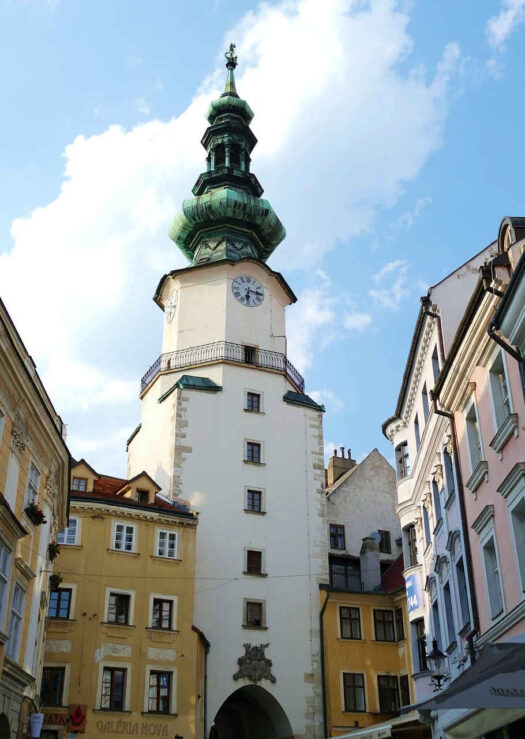 The 13th-century Michael’s Gate is the only remaining gate out of the original four city gates through the solid fortifications. In the past it consisted of a wooden door and a drawbridge over the moat that existed by then. Its current tower was added in the 18th century with a sculpture of St Michael slaying a dragon on the very top.

Today, the construction houses the Museum of Arms, and climbing it will provide you with panoramic views of the Old Town of Bratislava. Right beneath the tower, you will find a ‘zero-kilometre’ mark, indicating the distance from the city to 29 other cities around the world. 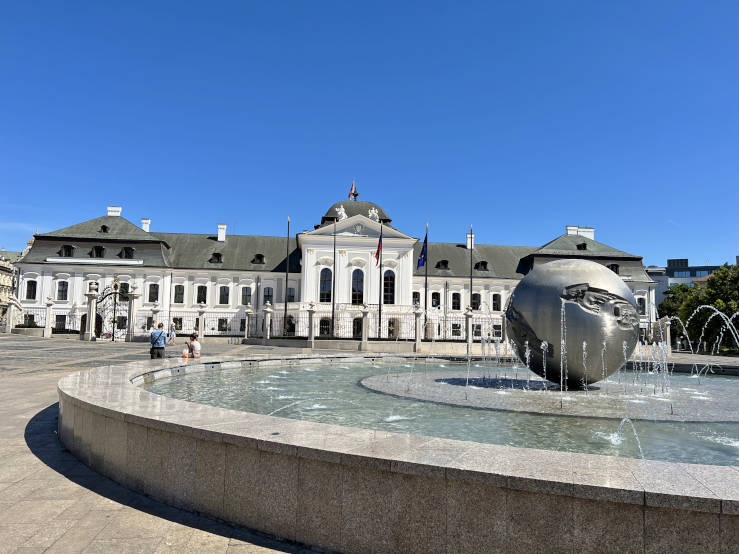 The presidential palace, Grassalkovich Palace, dates from 1760 and was built as a summer palace in rococo / baroque style, owned by Count Anton Grassalkovich who was an advisor to Empress Maria Theresa.

The palace has been used at a vast number of social occasions, and the composer Haydn performed here at one such occasion.

In recent years Grassalkovich Palace has served other purposes – both as a place for school children, and after the fall of the communist regime, it has since 1989 served as the seat of the Slovak president. 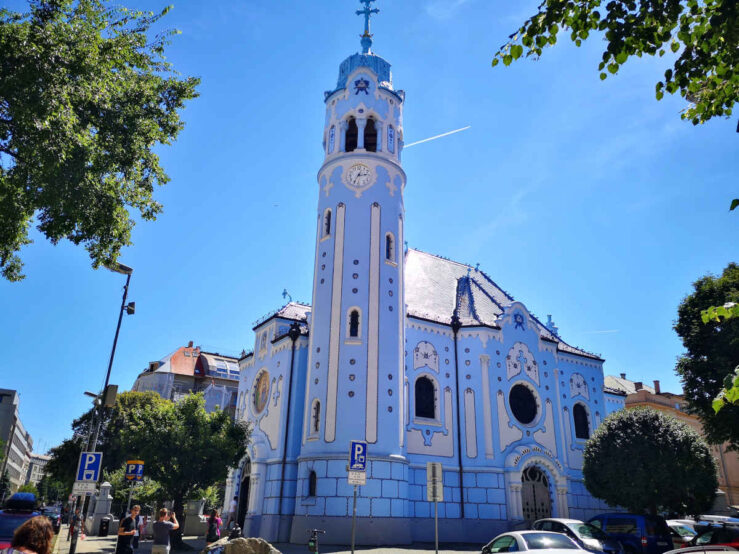 St Elizabeth’s Church is also known as the Blue Church due to its colour. It is a brilliant example of the art nouveau architecture found in various places across the city. It was erected 1909-1913 by the Hungarian architect Edmund Lechner and was intended to be a chapel for high school students. The neighbouring school was designed by the same architect. 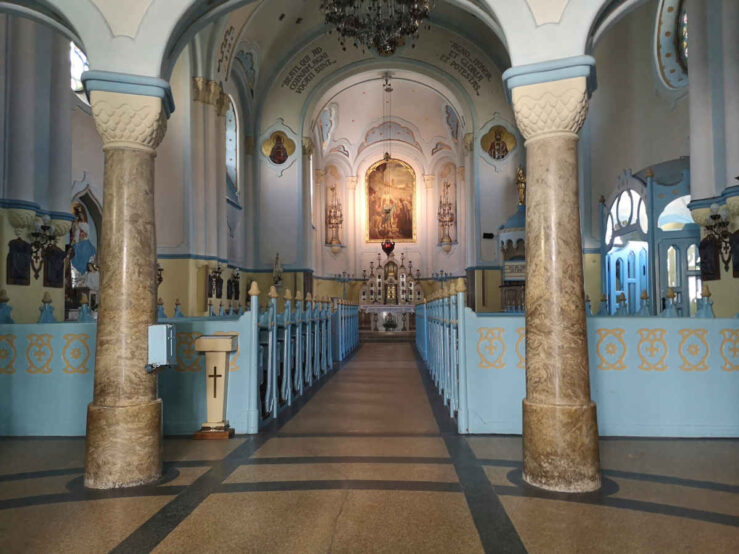 Shades of blue dominate both the exterior and the sophisticated interior of the construction, and its beautiful appearance makes it a population wedding location in the city. 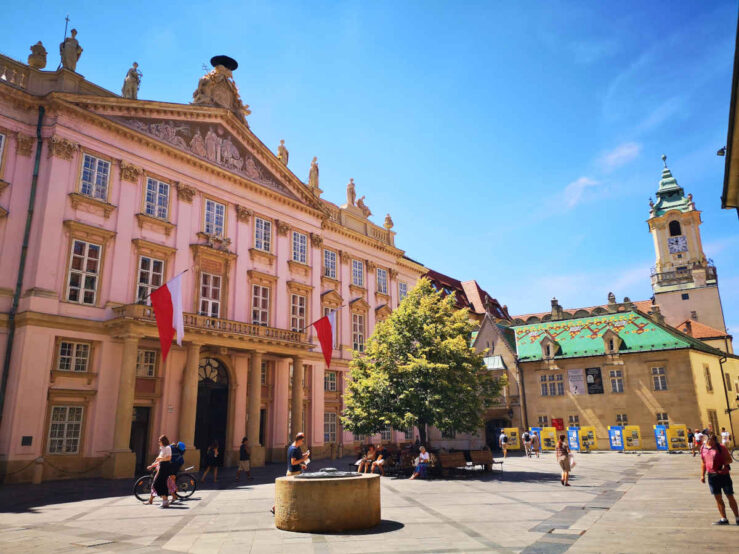 The beautiful melon pink Primate’s Palace is a classicist mansion dating from the last part of the 18th century. Among other assets it features an outstanding Mirror Hall which has been used for great occasions such as the signing of the Treaty of Pressburg in 1805 (linked to Napoleon’s triumph in the Battle of Austerlitz).

Other noteworthy elements are the English tapestries and the picture gallery of Hungarian rulers. Now the palace serves as the seat of Bratislava’s mayor. 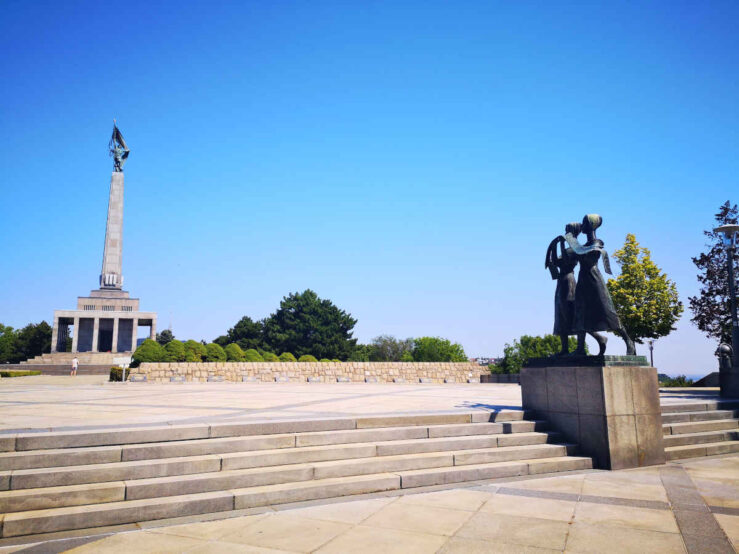 The Slavín monument is a reminiscence of the socialist era in Bratislava and commemorates the fallen soldiers of the Soviet Red Army who lost their lives at the end of World War II. Rising atop a hill in the outskirts of Bratislava, it reminds the residents of Bratislava of the communist past.

This memorial is the largest war memorial in Central Europe and the burial ground of 6845 Soviet soldiers.

Sadly enough, the nearby Church of Our Lady was destroyed in 1960 by the communists since they considered it to be a possible threat to the Slavín memorial.

Read next: Why Visit Brno Instead of Prague and Visit Prague Castle, Charles Bridge & Astronomical Clock