↓
DENMARK  Nr Vorupør in Thy used to be a traditional fishing community. Only in a few places in Denmark can you still today experience the unique and authentic ‘west coast way of fishing’ where the fishermen pull their boats right onto the beach when they come in.
Ainnelise Niyvold Liundbye
This page has affiliate links (if you purchase through our links, we get a small commission at no extra cost to you - thank you!), see our Privacy Policy & Disclaimer.

Nr Vorupør is one of the very few remaining places in Denmark where you will still see the fishing boats being pulled after a tractor on the sandy beach, when they return from the North Sea with their fresh catch.

People gather around the boats which have just come in, and you may be able to buy a few fish right from the boat, where the fishermen are just going through their nets. In case you prefer the fish already gutted, you can opt to buy them at one of the two fish shops just off the beach. 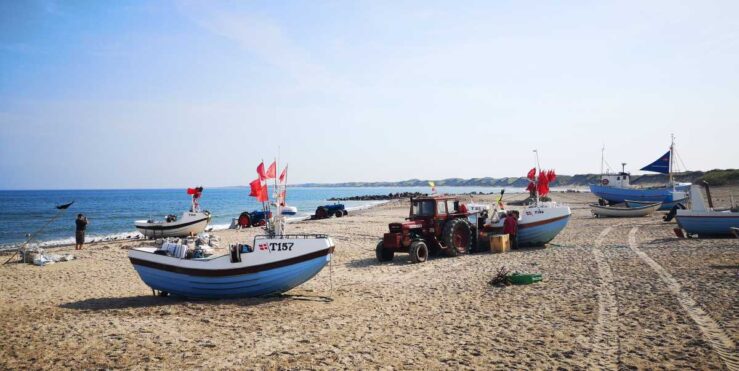 One of these is Fiskercompagniet which has existed for ages – since 1887. It actually has roots leading back to the Inner Mission’s arrival here in Vorupør.

Originally, ten fishermen founded Fiskercompagniet together, among them were Jens A. Fink, Jens Munk-Poulsen og Jens Munk-Madsen. The company was actually Demark’s first fishermen’s export cooperative – and at the same time an Inner Mission cooperation and a religious community. The exports to England were significant, and Fiskercompagniet in Vorupør naturally expanded. 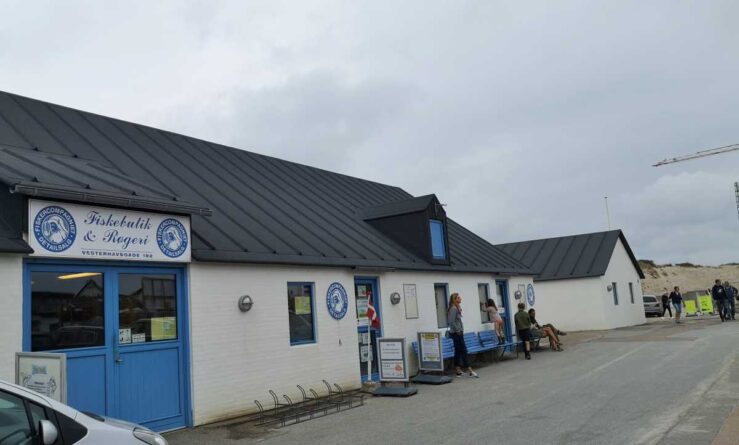 The fishermen prayed together as the last thing before putting out to sea. The articles of association had a religious foundation which lasted right until the 1950s! Still in the 1980’s general meetings at Fiskercompagniet began with prayers and devotion. In fact, not until 1984 were fishing and fish trade permitted here on Sundays! 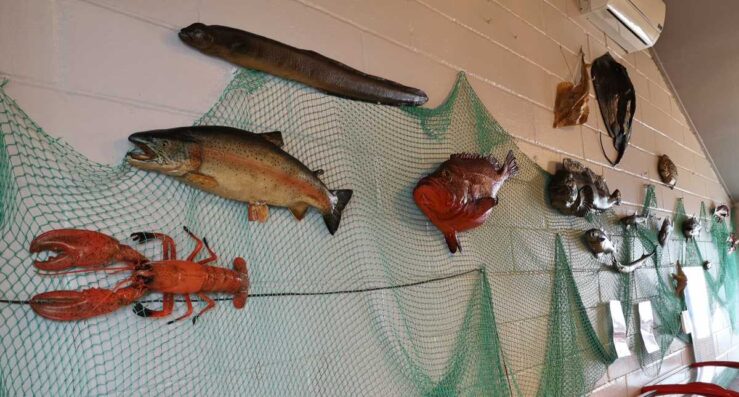 Fiskercompagniet significantly influenced the development of Nr Vorupør village, as well as the applied fishing methods, processes and fish exports. The fishermen joined the local cooperative in order to obtain better sales prices for the fish.

The catch was mainly sold at the fish auction in Hanstholm, besides in the fish shop. 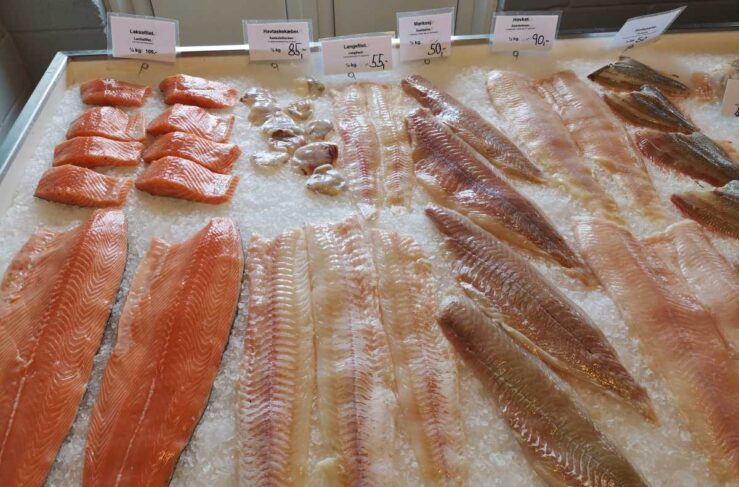 Fishing boats on the beach

In recent years the bigger fishing boats have stopped operating out of Vorupør. Today, only a number of smaller boats are still directly pushed out into and pulled in from the vast sea by the tractors here. It has rather become a ‘leisurely’ thing than an entirely large-scale professional occupation. Nevertheless, at Vorupør Beach you can still see the old winch used to pull the boats onto the beach using wires or chains, as well as the winch house. 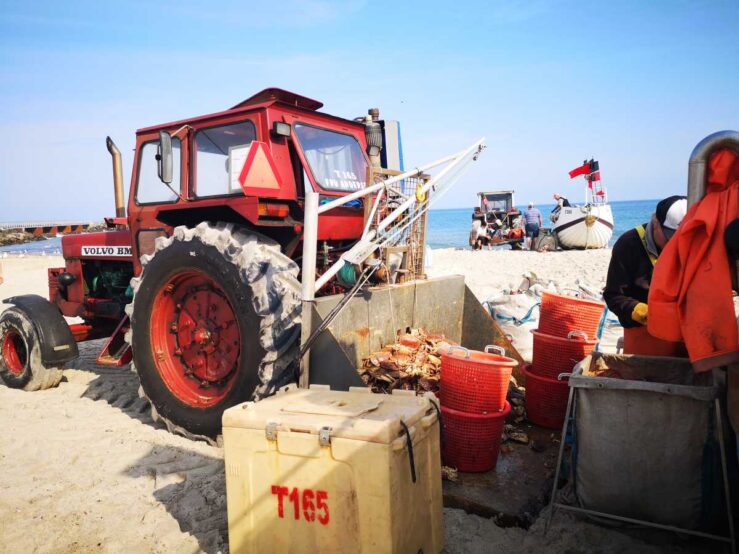 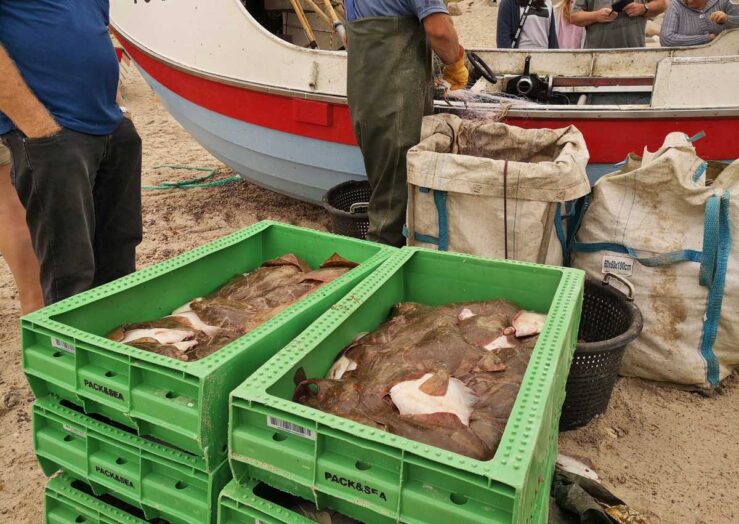 It is today the locals, as well as the Danish and German tourists, who benefit from the local sale. The fishes for sale here in the fish shops and the smokehouse vary, depending on the catch landed that specific day. Some days you can be lucky to find rare fish you may not even have heard of. Most opportune, you may still buy directly from the boats!

At Fiskercompagniet the basin with the lobsters crawling around is an attraction in itself, a mini aquarium! 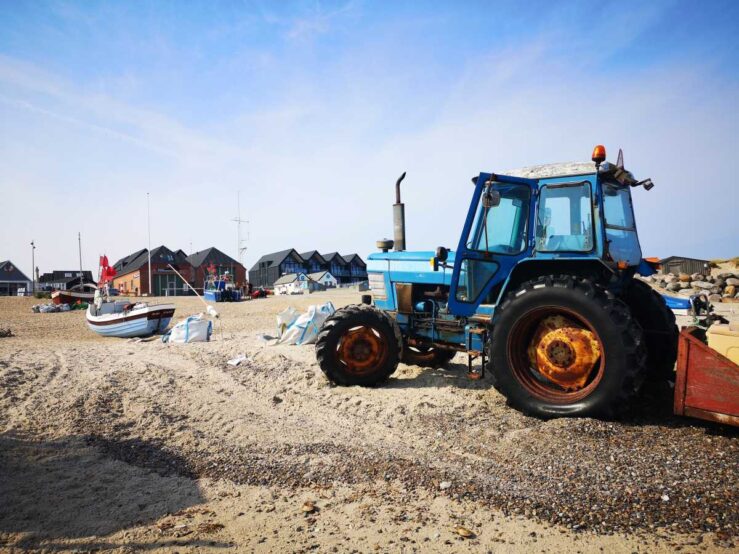 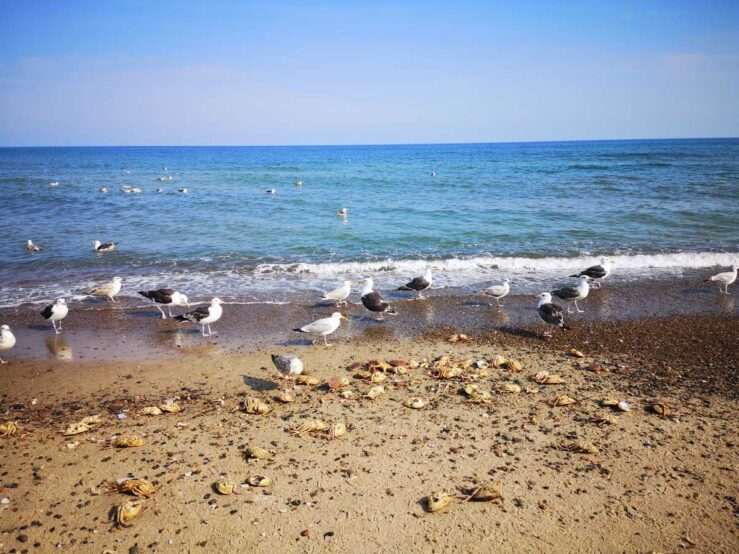 Take a look inside the amber and seashell shop where you will find a variety of shells, amazing fossils, amber products and selection of rare semiprecious stones. In case you want to give it a whirl finding your own amber, you can try right at the west coast beach here in Vorupør. During the frequent storms the seabed with its organic and inorganic material is agitated by wind and waves, and pieces of amber are then released and washed ashore. Provided you come at the right time, you will with a bit of luck be able to spot dozens of twinkling pieces along the beach. 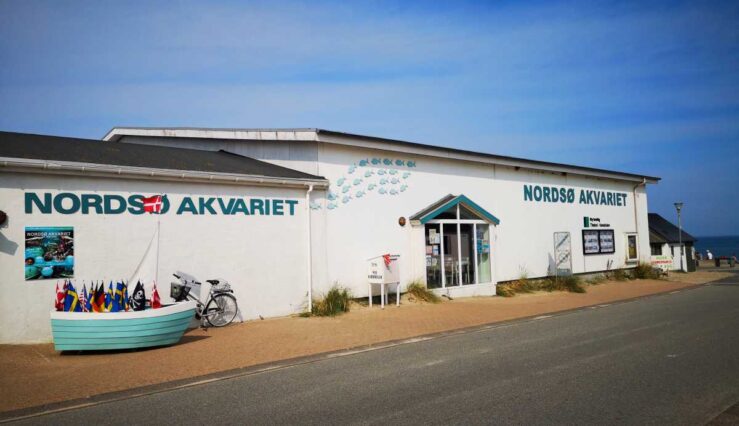 Another attraction in Vorupør is Nordsø Akvariet, the awesome aquarium with 18 basins featuring spectacular fishes from the North Sea. In all there are more than 80 species, including both the most common ones , as well as some more unusual breeds. They have all been brought to the aquarium by the local fishermen! Recently, also a shark tunnel has been added.

The North Sea is known to be tricky to swim in due to its dangerous undertows. Therefore, the safe Vesterhavsbadet, or Vorupør Havbad, a saltwater beach pool, was constructed in Vorupør a few years ago, in 2014. It provides people with the opportunity to swim under safe conditions. However, the pool construction hasn’t been entirely unproblematic. There have been incidences where a particularly harsh storm or hurricane has swept huge amounts of sand into the saltwater basin, more or less burying it! 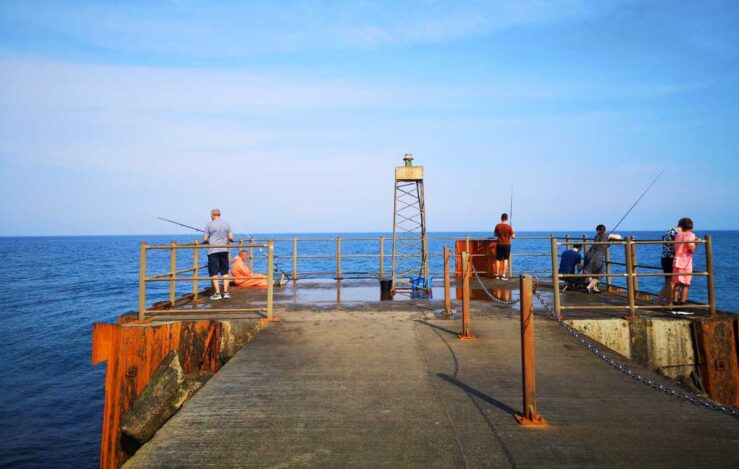 A stroll right to the end of the long pier on a bright and sunny day when the sea is tranquil is an awesome experience! At other times, when the sea is rough and turbulent, it is nearly impossible and even very dangerous to give it a try! 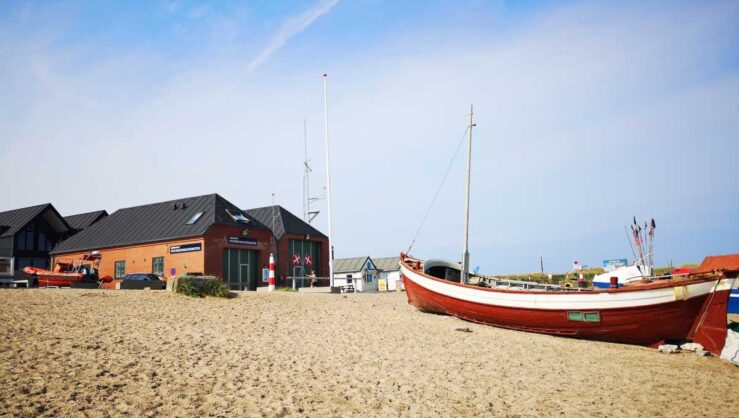 Vorupør is also known as one of the best surfer beaches along Jutland’s west coast, maybe only surpassed by Klitmøller a bit further north. Both Danes and German tourists flock to try the waves here, and if you are a beginner, you can take surfing classes right on the beach. 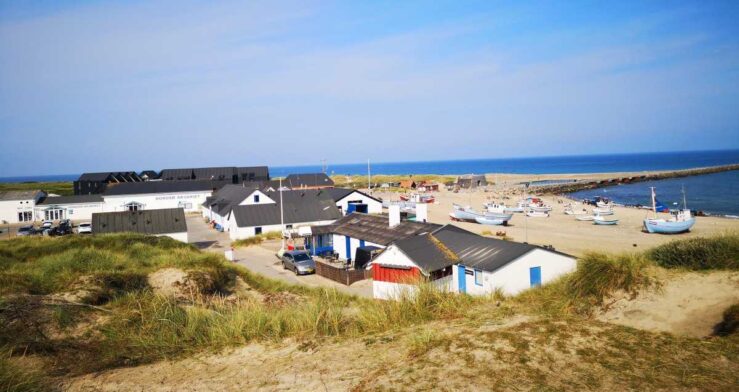 In fact, Vorupør is popular among Germans. Every summer a vast number of Denmark’s southern neighbours arrive at the small coastal town to spend a week or two in a holiday house here. The German influence is clearly visible since many sign posts in town and in the shops are often written in German! 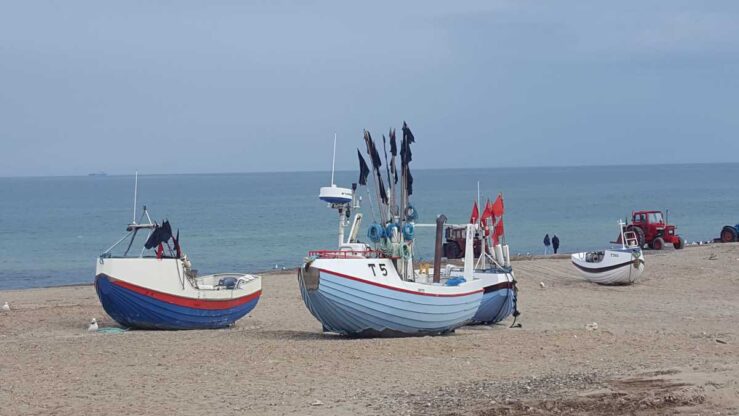 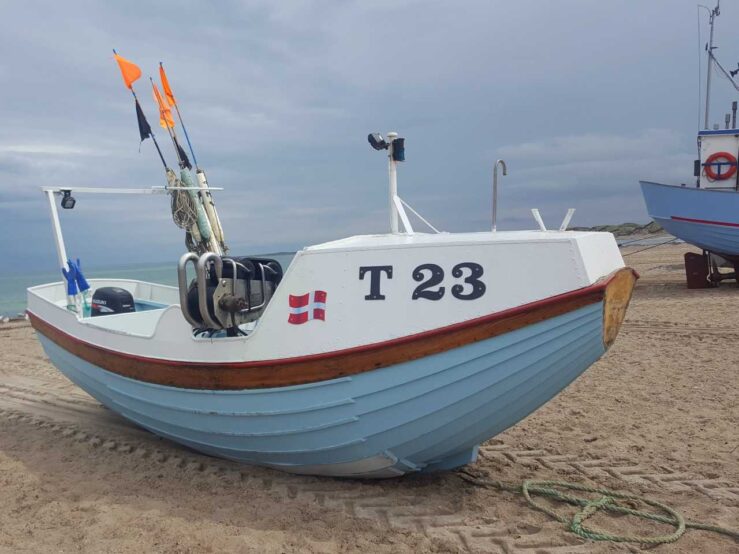 Another idyllic place nearby is the fishing village Stenbjerg which still features its traditional, old fisherman’s houses. 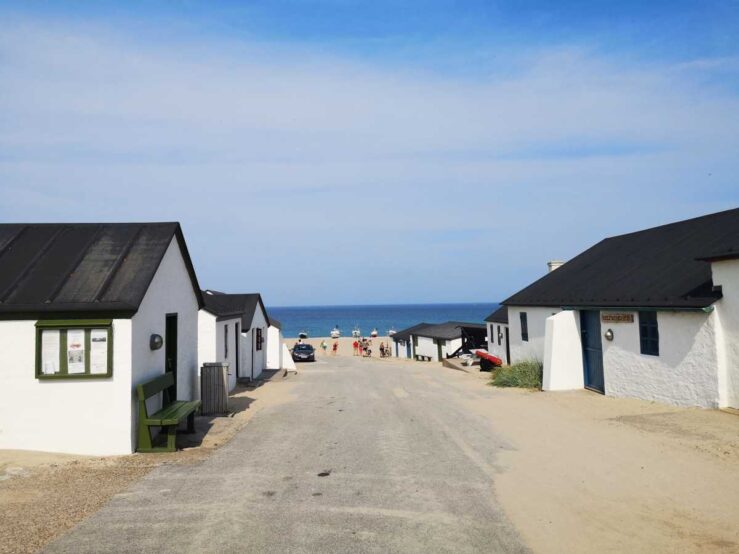 Some of the scenes in the Danish drama film Babette’s Feast by Gabriel Axel were shot here.

Once a year the traditional Stenbjergdag is held, where the local fishermen cook fish and other seafood for everyone. It is obviously a popular event which in addition to the delicious local food includes both musical entertainment and dance! 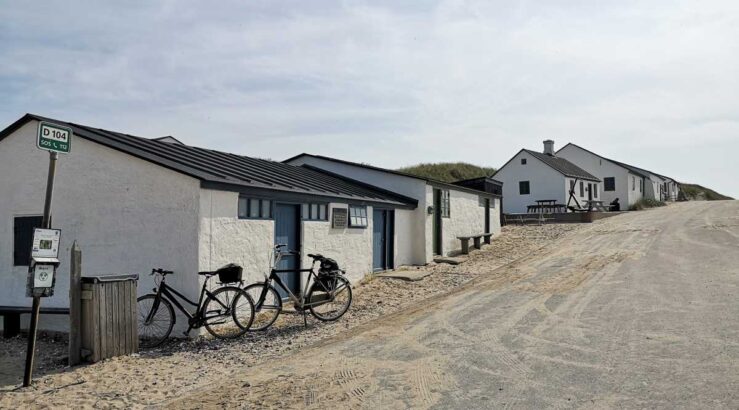 It is scenic nature that surrounds the fishing villages and the west coast: sand dunes, heather and forestal areas. The region in this corner of Denmark is part of the vast Nationalpark Thy, which stretches from Thyborøn to Hanstholm along the Danish west coast. It is the biggest ‘wild’ area in the country, and some of the first wolves in Denmark in recent times have actually been spotted here!

Get inspired for a Stockholm trip: 9 Things to Do in Stockholm: Vasa Museum, Gamla Stan