↓
DENMARK  A visit to Ribe is a must next time you are in for an off-beat place in south-western Denmark. Located at the Wadden Sea, the medieval town is surrounded by salty marshland, dyke-grassing flocks of sheep and an absolutely unique birdlife.
Ainnelise Niyvold Liundbye
This page has affiliate links (if you purchase through our links, we get a small commission at no extra cost to you - thank you!), see our Privacy Policy & Disclaimer.

Southern Jutland is unquestionably as flat as a pancake. This is the corner of Denmark we visit on a fine October day, and where we discover the true Danish marshland with its vivid birdlife, herds of sheep and protecting dykes – the epitome of the Danish Wadden Sea in the Ribe area.

Migratory birds and geese flock here in spring and autumn on their way to other European or African destinations. The Wadden Sea provides with its coastal wetland, sea-grass meadows, salt marshes and sandy beaches excellent opportunities as a habitat for a wide variety of plant and animal species. Not surprisingly, it is on the World Heritage List.

Black Sun at the Wadden Sea

One of the absolutely stunning phenomena is the Black Sun, unpredictably occurring during March-April and September-October. When it happens, it is a breathtaking scenery where thousands of starlings gather and make the most incredible formations in the air. Of course it is a favoured moment to be able to watch them, but you never know with certainty if you will be lucky enough on the precise day you choose to go. 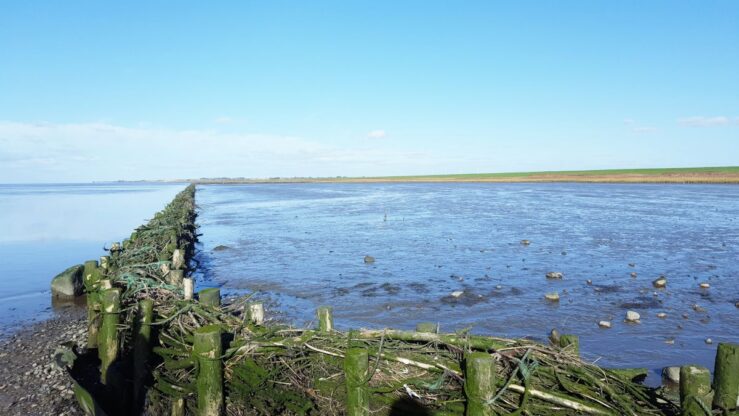 The koogs are created when the seabed is drained | Photo: Travel In Culture

Where to stay in Ribe
Advertisement
Den Gamle Arrest is a stay in the former prison in Ribe! The hotel is centrally located in Ribe near Ribe Art Museum and the train station – and features a large garden and courtyard café in summer.

Den Gamle Købmandsgaard Bed & Breakfast is a centrally located hotel in the historic town of Ribe, close to Ribe Cathedral. There are individually designed rooms with wooden floors and modern furnishings. Tea and coffee are available all day, and guests can enjoy the terrace and garden.

The Wadden Sea dykes and locks

Being on a day tour to visit Ribe and experience the Wadden Sea, we drive along the sheep-covered dykes and watch out for special birds. By foot we follow the trail along and across one of the outer dykes and proceed towards Vidåslusen , the Vidå Lock, just north of the German border. We are amazed to view row upon row of wooden poles in the water. Then it suddenly strikes me that this is precisely how the land is expanded here.

Continuously, new land is created from the shallow sea. By constructing dykes around the sea mud plains of tidal marsh, the so-called koogs are born. They are areas of seabed and marshland which get drained, and then, little by little, are turned into grassy land. In this way new farmland arises and, moreover, it is a further security to protect the areas from the tidal sea. 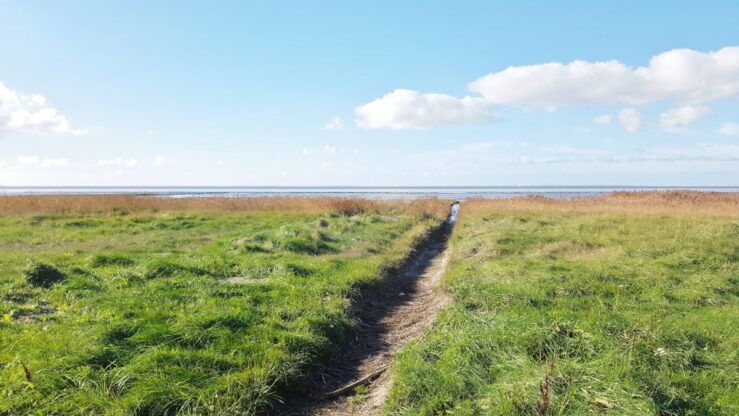 Grassland eventually results when the flat seabed has been drained | Photo: Travel In Culture

At Vidåslusen we unexpectedly spot a curious seal swiftly popping up from the water. Just as fast as it appeared, it is gone again!

All along the locks and dykes we catch sight of the region-specific flood columns! At Højer Lock, just one kilometer further inland, we reach the massive and tall Højer flood column with a clear indication of how high up the water came at historic floodings.

During the years Ribe and great parts of Southern Denmark have been significantly challenged and affected by floodings from the sea. For this reason numerous dykes have been built everywhere along the west coast and often repeated further inland. The dykes are constantly reinforced when a storm rages. We even come across numerous elevated houses constructed on dyke-like grounds.

A visit to the picturesque medieval town Ribe, centrally located near the Wadden Sea, is next. The town has its own monumental flood column with markings of the most devastating floodings throughout the last centuries.

The Great Man Drownings of the Wadden Sea

In 1634 one of the worst floodings ever took place and the water raised till 6 m (20 ft) above normal level. The incidence is also known as the Second Great Man Drowning! It has later been estimated that between 8,000 and 15,000 people drowned when wide areas of land were struck by the inevitable floodings. Ribe Cathedral specifically has a marking on the wall indicating up to where the water went (1.7 m or 5.6 ft above the proper church floor!).

The devastating storm wiped out a vast majority of the former island Strand, and the small fishing village Sønderside was left uninhabitable and given up forever. Instead, another piece of land, Skallingen, arose from the swelling sea.

Visit Ribe in Denmark – Medieval Town of the Wadden Sea 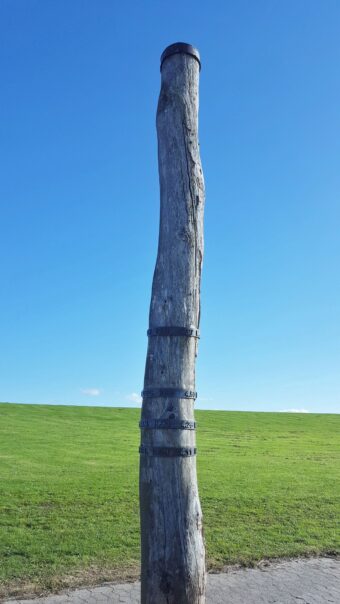 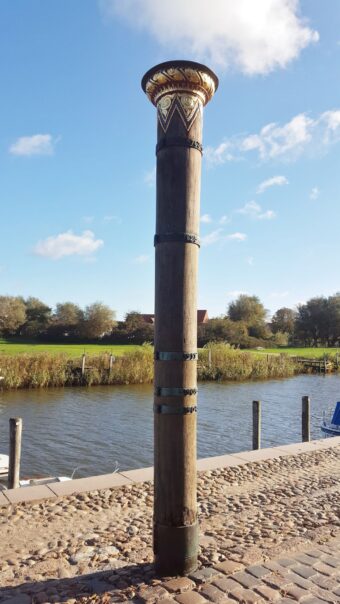 Centuries before, in 1362, the First Great Man Drowning occurred. The coastline was changed and towns like Rungholt (of an estimated 1,500 – 2,000 inhabitants) were forever deleted from the map. Only centuries later, when artifacts emerged from the long buried land and the Wadden Sea, has it become clear that this Rungholt actually had existed as a real place and not just as a legendary. According to the myths, the small community might even have existed 3,000 years ago. Some sources claim that there is evidence that trading with the Minoan culture had taken place at that early time. If it is true, it would be really unique since it would then have been an important trading place at a much earlier point in time than otherwise assumed.

Visit the medieval town of Ribe in Denmark

It is with this tough history in mind that we now pay a visit to Ribe and its town harbour with the solemn and probably most well-known flood column in Denmark. The year 1634 is clearly marked on the very top of it, reminding every passerby of the tragic past. 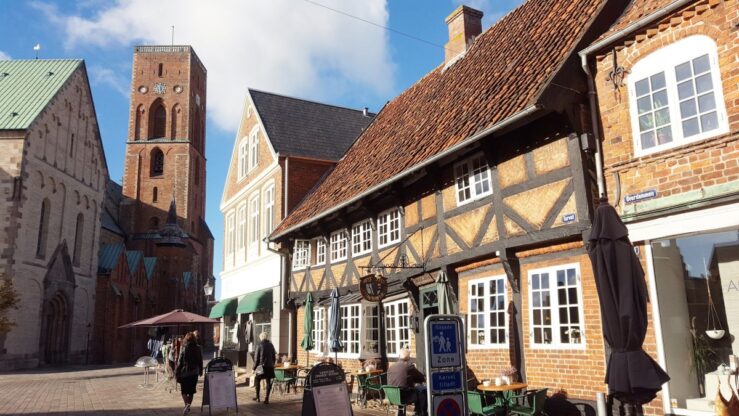 A cosy restaurant offers an excellent view of the old cathedral in Ribe | Photo: Travel In Culture

Anyway, the town is surprisingly rich in other intriguing history as well. Strolling through the idyllic cobblestone streets past the half-timbered brick houses, we now get our minds filled with completely different impressions. Ribe is a well-preserved medieval town to visit – notably the oldest in Denmark! The kernel is the square and streets around the old cathedral which is also absolutely worthy of a visit.

The town is believed to be founded around year 710 as a trading centre. Not only is Ribe the oldest still existing town in Denmark – but it also features the oldest cathedral from the 13th century as well as the oldest town hall from 1496 which you today can visit as a museum! It tells the history of medieval life including the role of the traditional night watchmen and the notorious, gruesome torture devices used in the medieval sense of justice in the small trading town. 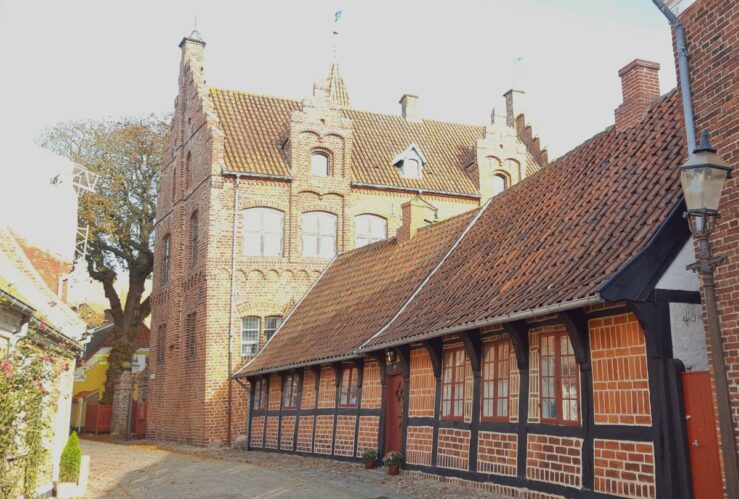 Despite the at times harsh life, Ribe preserved until the 16th century the character of a flourishing trading place. During the years to come the town structure irrevocably underwent radical changes along with the numerous fires, the plague and the Reformation.

To address justice principles, the Danish king Erik Klipping established in 1269 the Court of Ribe. It was, though, a much stricter law than the previously enforced Code of Jutland which continued to apply in the rest of Jutland. Even minor offences related to trading could be punished by death – by decapitation or hanging! 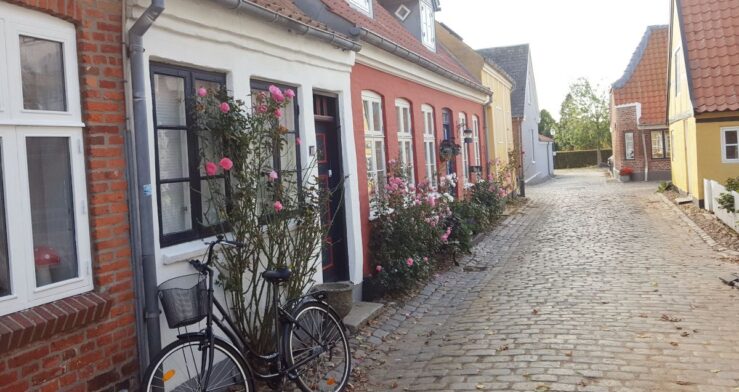 However, it is hard to sense the harshness of old Ribe when we are now ambling through the small town. Picturesque, as it appears today, it hides its severe past well. Historical houses dot the narrow streets which are often flanked by enchanting, colourful roses leaning towards the uneven house walls.

Stork visit in Ribe is unique in Denmark

Tourists unwind in the tiny restaurants and cafées opposite the old cathedral. If we are not fortunate enough to view the Black Sun during our stay here – may we instead be able to detect a stork above the town roofs? Ribe is notably renowned for the occasional visit of a stork couple in the stork nest on the roof of the old town hall – it is awesome when it shows up! 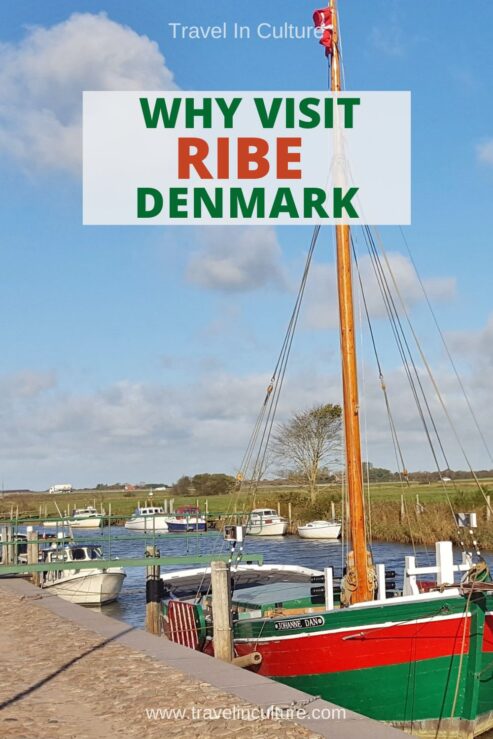 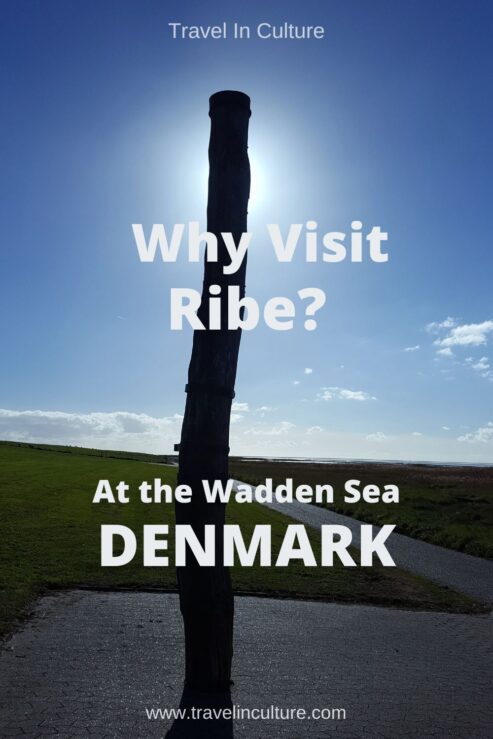 Featured image of
Visit Ribe in Denmark:
Travel In Culture