↓
GREECE  Who hasn’t heard of Pythia, the famous oracle of Delphi in ancient Greece who had influence on major decisions in the classical world? What is the story behind Delphi – and how to visit the site today?
Ainnelise Niyvold Liundbye
This page has affiliate links (if you purchase through our links, we get a small commission at no extra cost to you - thank you!), see our Privacy Policy & Disclaimer.

The Sanctuary of Delphi in Greece is known as the seat of Pythia, the famous oracle who advised in important matters in ancient Greece, gave predictions, and greatly influenced decisions on war and politics of the city states in the classical world. Set in a beautiful landscape on the southwestern slopes of Mount Parnassus, the Temple of Delphi can be found. This is the location where the wise lady resided.

City states, pilgrims and world travellers came to seek advice with Pythia before initiating major initiatives. They believed the advice to be her interpretation of the god Apollo’s prophecies, justifying the designation ‘oracle of Apollo’. A team of priests assisted her in the ceremonial task, interpreting her reaction in the state of ecstasy she found herself in. It is the general perception that she was brought into ecstasy by inhaling unknown gases seeping up from the underground. The group of priests communicated her answers to crucial questions, reformulating them into the well-known hexameters. 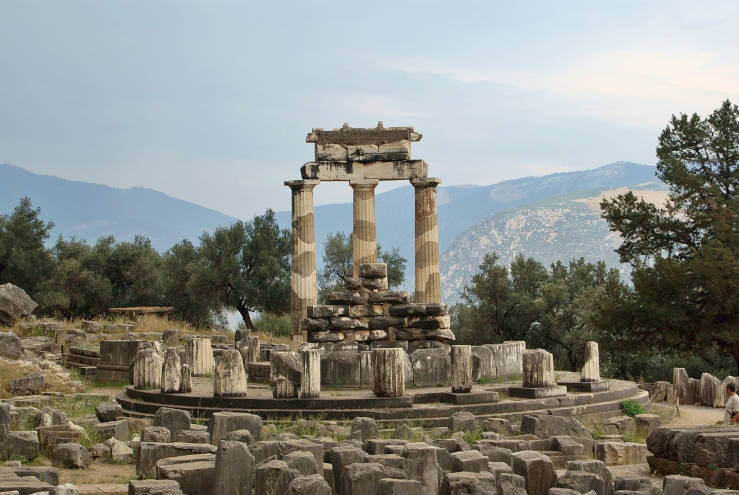 It was between the 6th and the 4th century BC that Pythia had her time of glory and was considered the most trustworthy source of information in the ancient world. The priestess is believed to have influenced some of the most significant decisions made in major wars such as for instance the Trojan War.

Delphi was by then both a cultural and religious centre, dedicated to Apollo and the goddess Athena, and was at the time considered the centre of the world. In Greek mythology it was here at Delphi that the two eagles met that were sent out by Zeus to locate the navel of the world. 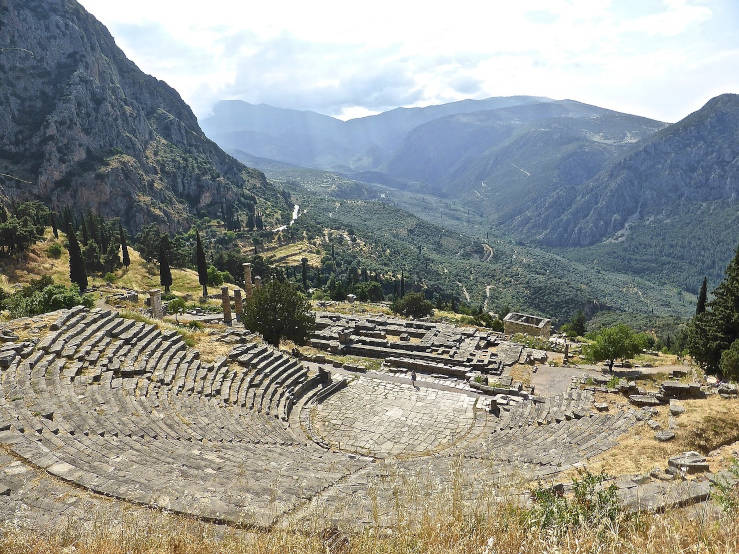 The sanctuary of Delphi and the role of the oracle were closely linked to the Greek mythology. According to the myth, the sanctuary was guarded by a serpent named Python. Apollo heroically succeeded in killing Python which resulted in the creation of Apollo’s sanctuary at Delphi. The god was also depicted in the form of a dolphin, hence the name Delphi. Subsequently, the famous Delphi oracle was given the name Pythia after the serpent.

The myth gave name to various festivals at Delphi, such as the Septerion and the Delphinia, as well as another recurring event, the Pythian Games. They were competitions held every four years (6th – 4th century BC) in cultural disciplines such as music and poetry. The Pythian Games were at the time the second most important events, after the Olympics, that took place in Greece. Over time the games were expanded to include athletics as well, and the Delphi ruins today still include the athletic gymnasium, as well as stadium. 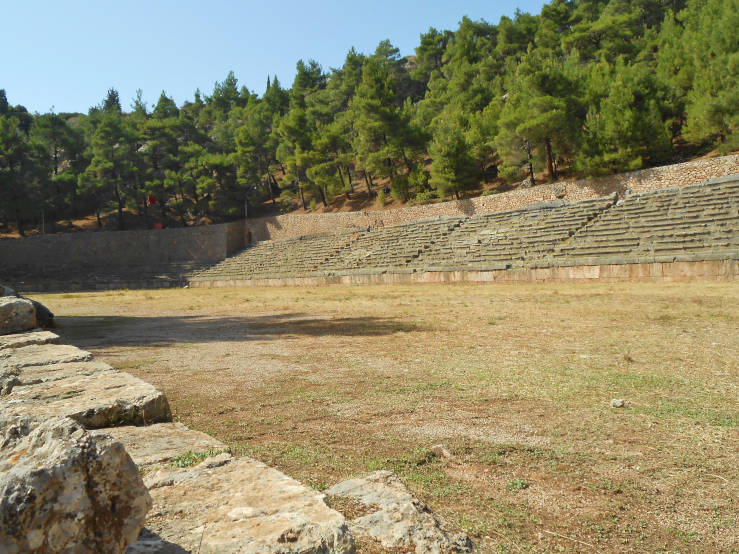 Over the years the site fell into decay. In particular, it was quite abandoned by the emperor Theodosius I, and when Christianity gained ground, Delphi’s heyday was over – and the ancient Delphi culture was forgotten for many centuries.

Where to stay in Delphi
Advertisement
Athina apartment Delphi air-conditioned apartment featuring a balcony with garden views, a garden and a terrace. The property is located near the Archaeological Museum and archaeological site in Delphi.

Fedriades Delphi Hotel the hotel is located a short walk from the Archaeological Museum and archaeological site, overlooking the Corinthian Gulf and the picturesque valley. The rooms come with balconies and the suites additionally with a spa bath. The hotel offers a buffet-style Greek breakfast.

Parnassos Delphi Hotel spacious hotel centrally located in Delphi close to the archaeological site. Some rooms have an extraordinary view of the surrounding landscape. The à la carte restaurant serves a variety of Greek and Mediterranean dishes.

From 1860s the archaeological site was rediscovered, and reconstruction works were undertaken to save as much as possible. The Temple of Apollo was one of the structures undergoing comprehensive restoration. Likewise, the ancient theatre and other important constructions have also undergone extensive preservation works.

The excavations have revealed that the first settlers came to Delphi in late Mycenaean times (15th century BC). Nevertheless, the cult of Apollo arrived much later, in the 8th century BC, with priests from Knossos in Crete. 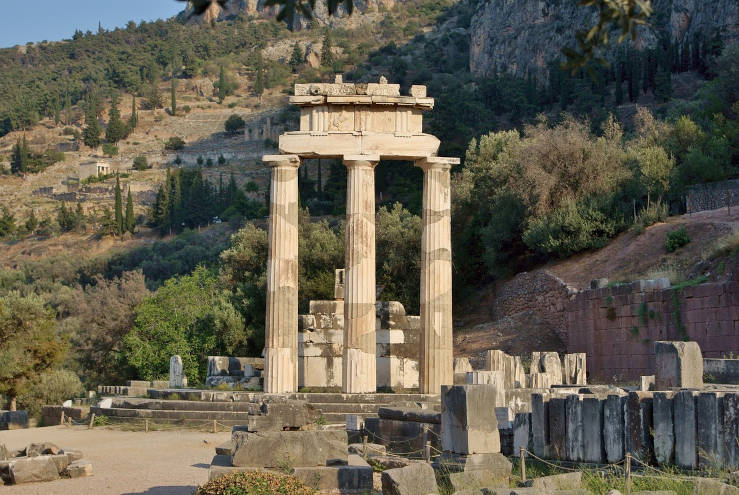 Today the area is a UNESCO World Heritage Site – an archaeological site featuring the remnants of the ancient monuments and temple constructions. The site includes the Sanctuary of Athena Pronaia, the Sanctuary of Apollo with the Sacred Way leading to the Temple of Apollo and the former site of the oracle of Delphi, as well as a theatre, a gymnasium, palaestra, and baths. During the Pythian Games musical contests were held in the theatre. Moreover, there is the stadium where the athletic contests took place.

Just off the archaeological site, at the foot of the impressive complex, the Delphi Archaeological Museum has been built to house the outstanding collection of artefacts that have been rediscovered in ancient Delphi. 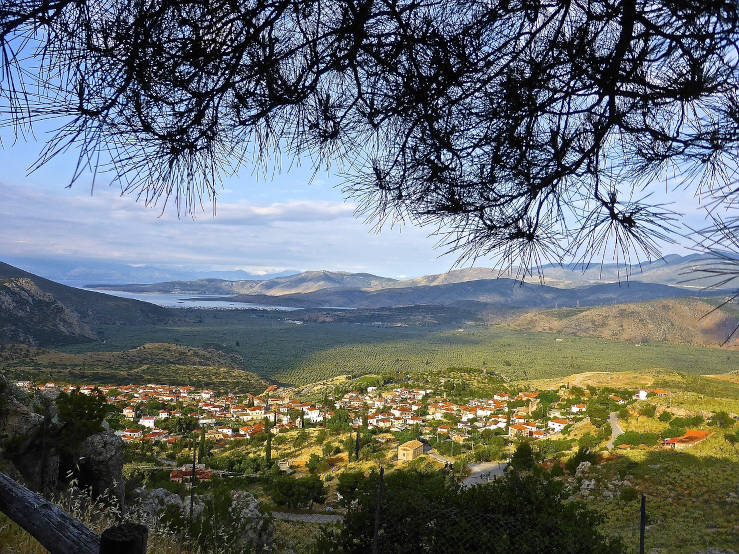 However, a stone’s throw away from the ruins there is also the modern town, Delphi, with restaurants, small family-run hotels, and a lot of shops selling souvenirs and replicas of ancient Greek statues and other ‘archaeological’ objects. The Delphi Valley is a spectacular place to stay and several of the accommodation options provide panoramic views of the surrounding landscape from their rooms and balconies.

Delphi is easy to reach by car from Athens, and you may consider including the famous site on a road trip in Greece from Athens to the Peloponnese or up further north on the mainland. It is also easy to combine a Delphi stay with a beach holiday since the local beach is only a few kilometres down the sloping mountainside.

Read next: Make a Road Trip in the Peloponnese and Exploring Ancient Corinth and the Corinth Canal

What is the Story Behind the Oracle of Delphi in Greece 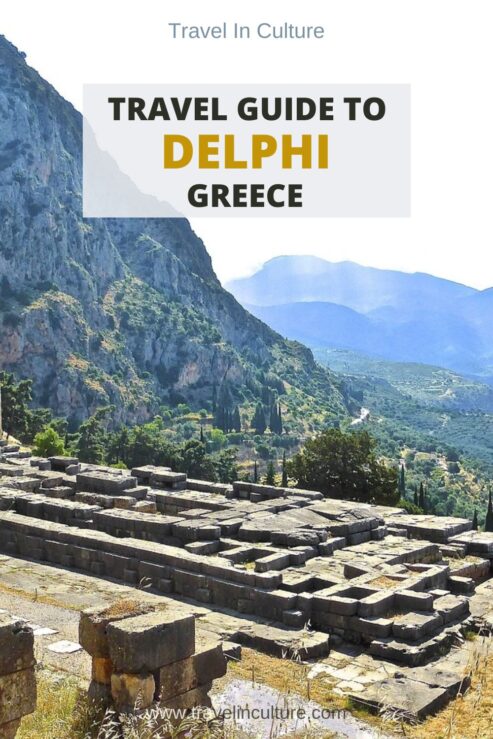 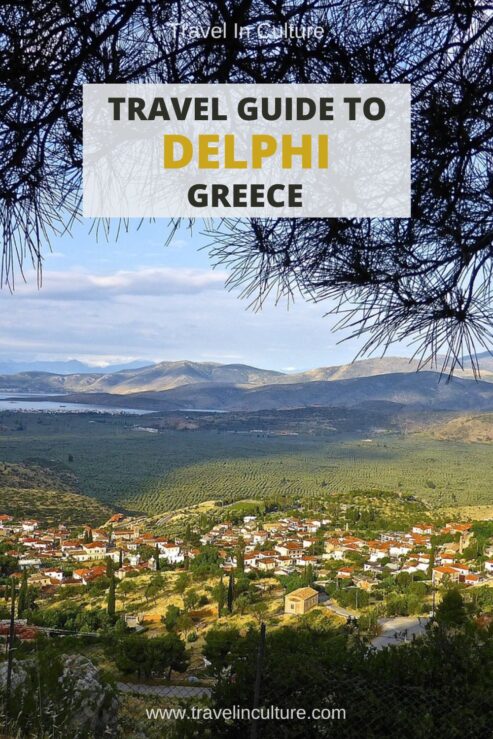 What is the Story Behind the Oracle of Delphi in Greece: