↓
SWEDEN  Famous for its idyllic marina, known as a literary crime scene, as well as home of one of Astrid Lindgren’s fairy tale protagonists, Fjällbacka lies as a popular seaside town scenically along the striking Swedish archipelagic west coast.
Ainnelise Niyvold Liundbye
This page has affiliate links (if you purchase through our links, we get a small commission at no extra cost to you - thank you!), see our Privacy Policy & Disclaimer.

Fjällbacka is one of the true Scandinavian gems located at the spectacular Swedish archipelago between Gothenburg and the Norwegian border, more precisely right between Hamburgsund and Grebbestad in Bohuslän. Situated in a unique coastal region with its rocky isles, idyllic fishing villages and remarkable granite shoreline against the blue horizon, Fjällbacka has a lot to offer.

Besides featuring a picture-postcard marina in summer, brimming with locals and visitors, the small coastal town is also known from Camilla Läckberg’s books as the ideal crime scene, and as the whereabouts and setting in Astrid Lindgren’s children’s book Ronja Røverdatter (‘Ronia, the Robber’s Daughter’). 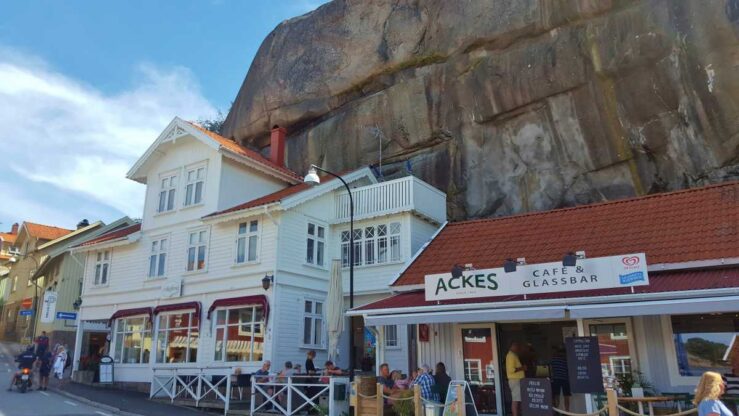 Inspiration for Sweden trip: 9 Unique Spots in Göteborg and Sannäs in Sweden’s Archipelago and 9 Things to Do in Stockholm

Beyond the rooftops you will find Røverkløften, the Robbers’ Gorge, which is characterised by the large piece of rock, wedged between two real massive rock formations and dangerously hanging above the heads of all brave visitors hiking their way up the mountain. Seemingly, this is the homeland of Ronja Røverdatter.

Fjällbacka has over the years drawn many intellectuals and prominent people indeed. Another famous person who frequented the Swedish town was Ingrid Bergman (1915-1982), the Swedish actress, who starred in a large number of international films and plays. Married to the Swedish theatre impresario, Lars Schmidt, she spent her holidays at Fjällbacka, and used the place as a cherished retreat. Today, the town honours her with a bust, donated by Lars Schmidt and unveiled in 1983 by her children. Moreover, in 2015, an exhibition of photographs from her years in Fjällbacka opened. 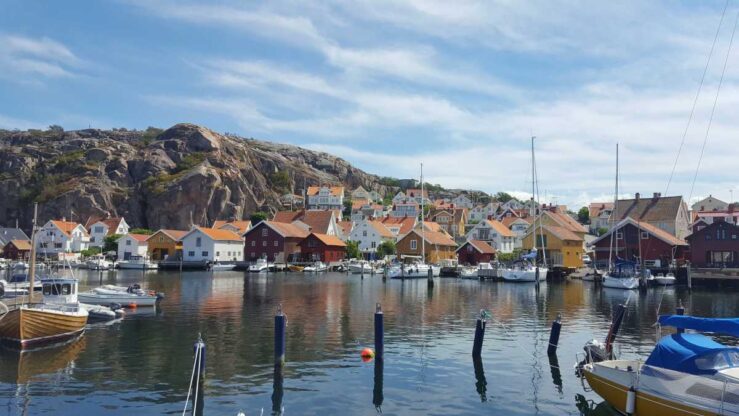 We arrive at Fjällbacka on a Saturday, when the annual festival, the Sjöräddningsbasar (Day of the Sea Rescue Society), takes place – with the purpose of raising money for Sjöräddningssällskapet, a non-profit organisation. The marina is crowded with people who have come to the small Swedish town today to participate in the festivitas. It is a fine blend of locals and tourists strolling around at the harbour, enjoying an exquisite lunch in one of the numerous restaurants, throwing a glance into the tiny boutiques, or having an ice cream or a korv (sausage) on a bench.

Soon, we are caught by the ambience and find ourselves drifting with the groups along the quay, ending up at the far end of the pier. 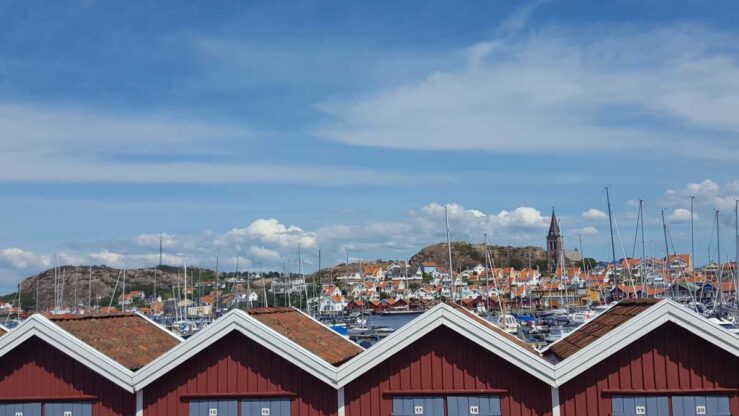 The Sjöräddningsbasar is a real special event with loppis (flea market) and other fun things. Here you will find just about anything which occurs to you: tablecloths, crocheted potholders, pans, glass art, paintings, antiquities, handicrafts, baskets, kanelbullar (cinnamon buns), books, woodwork, fishing gear and a lot more things that appear when people inspect the attic.

Games for the children, dart and the traditional lotteries such as Swedish räklotteri (shrimp lottery) and kaffelotteri (coffee lottery) are mandatory features on every local market in the region. There is loads of local-style fun to participate in. 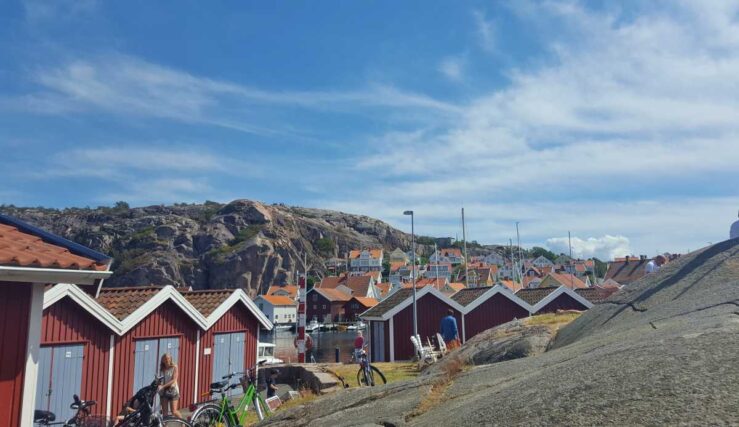 Afterwards, we find a spot on the flat rock overlooking the market, from where we can enjoy the most vacker (beautiful) views of the marina and harbour.

It is awesomely picturesque to see the white boats against the azure water, red wooden houses and an imposing rocky mountain in the background.

The icing on the cake is when Sjöräddningssällskapet demonstrates its rescue vessels, which we are even invited to board. Everything can be accessed on them: the galley, the quirky berths, the rescue stretchers, the oily-smelling engine room, as well as the high-tech wheelhouse. 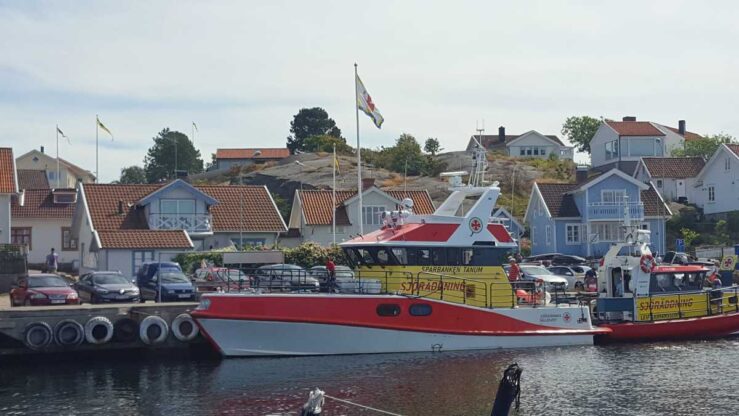 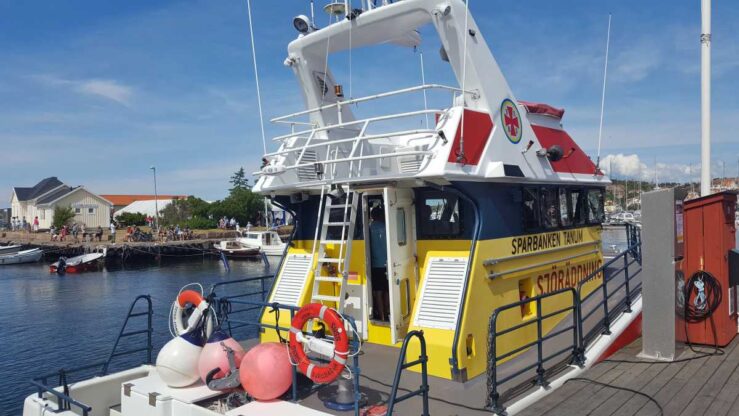 Just outside Fjällbacka we notice the signposts informing about today’s drive-in bingo, which together with the local loppis are popular activities here.

Only a few moments later we find ourselves in the middle of quite another event: hundreds of American vintage cars in all colours driving past us in the opposition direction. It is nearly like a Grease film setting. Young, as well as not so young, Swedes drive along with their hair styled and eyes covered with sunglasses from the 1950s. They are adequately dressed in the same style, and seen literally hanging out of or even lying on top of their open cars. Maybe it is a recurring event in this part of Sweden.

What to see in Göteborg? Read 9 Unique Spots in Gothenburg

Going to Oslo? Then read Travel Guide to Oslo

Would you like to get inspiration for Stockholm? Then read 9 Cultural Things to Do in Stockholm

Read next: Have you heard of Røros Mining Town? and Exploring Norway on a Cruise Ship 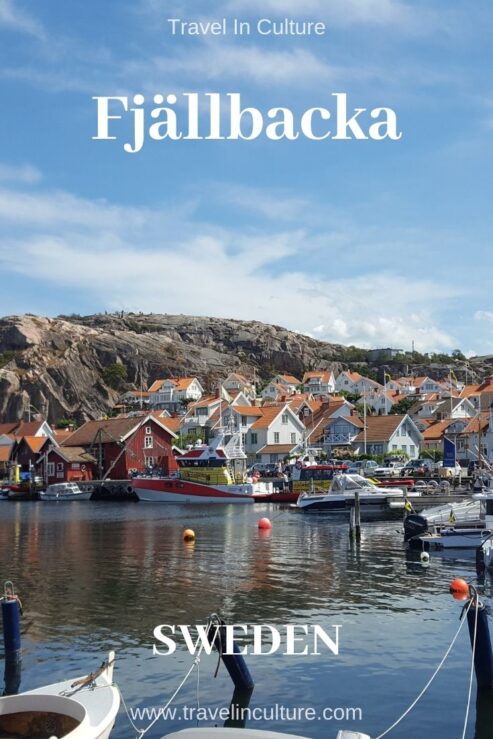 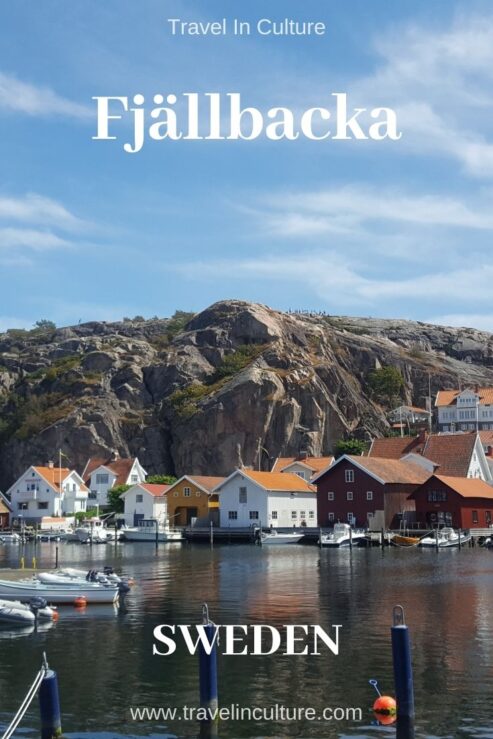