↓
DENMARK  The old Pramdragerstien or Trækstien in Jutland is the old towpath used to pull the barges up and down the River Guden. Just renovated on the stretch of river from Silkeborg to Kongensbro, it now appears as a prime trail to hike along the scenic river.
Ainnelise Niyvold Liundbye
This page has affiliate links (if you purchase through our links, we get a small commission at no extra cost to you - thank you!), see our Privacy Policy & Disclaimer.

The longest river in Denmark, the River Guden (or Gudenåen in Danish) in Jutland has its spring at the thicket Tinnet Krat (at an altitude of only 70 m / 230 ft) very close to the spring of another Danish river, Skjernåen. Actually, the springs of these two principal rivers in Denmark are just a few hundred metres apart at the Ridge of Jutland – and it is here that the history of Pramdragerstien, or Trækstien, begins.

The two rivers continue in each their direction down the vaguely sloping terrain, the River Guden north-eastbound and Skjernåen westbound. Notably, the River Guden outperforms Skjernåen in being the longest of the two (150 km / 93 miles). 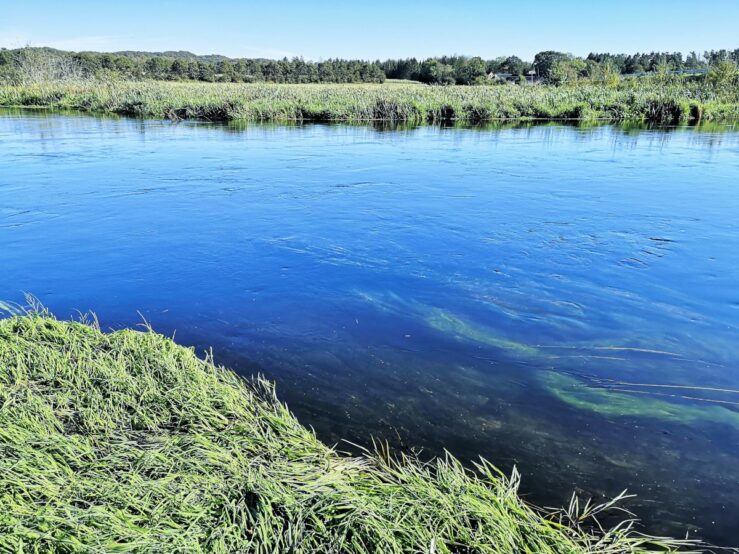 For decades the river has been popular for recreational canoe and kayak trips. Nevertheless, as a newer feature, the parallel, remarkable, old towpath is now again in use. After in turn sinking down at flooded times and then each time disappearing a little bit more on the grassy river banks – all during most of the 20th century, the historic path has eventually been renovated and turned into an excellent and highly attractive hiking trail surrounded by beautiful countryside.

The recently improved stretch of the towpath between Silkeborg and Kongensbro allows you to hike all along the scenic River Guden enjoying the setting of the Ice Age landscape of central Jutland, today featuring lush forest, breathtaking meadows and an interesting wildlife. 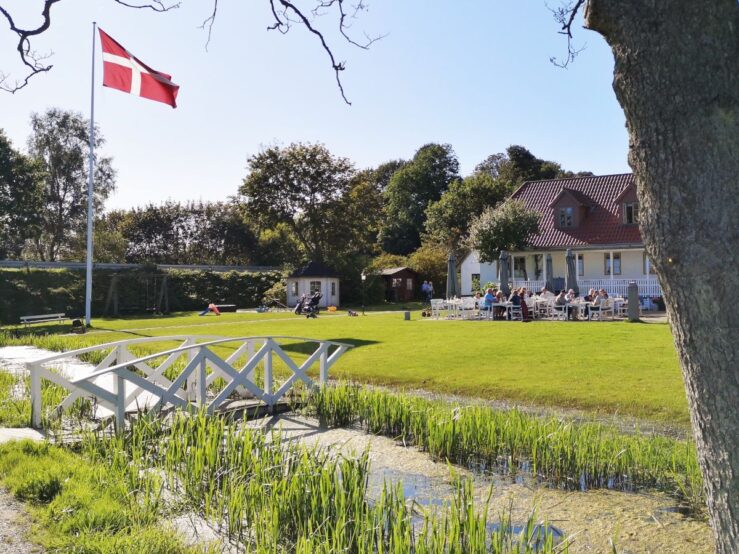 Where to stay in Aarhus
Advertisement
Helnan Marselis Hotel is a hotel overlooking Aarhus Bay, featuring a fitness area, sauna and a small indoor swimming pool. The hotel is close to Marselisborg Castle and Aarhus city centre.

SOFS boutique hotel is a centrally located hotel, close to Den Gamle By, that has uniquely decorated rooms and a garden. The hotel offers an organic breakfast and an afternoon snack buffet with free hot drinks. Bicycle rental on site.

Between Silkeborg and Kongensbro you will find the village Svostrup. The inn Svostrup Kro is picturesquely located on the banks of the River Guden.

The history of the old towpath Trækstien (træksti is the Danish term for towpath) / Pramdragerstien in Jutland goes well back in time. From old times this was the location for a pause on a journey through Jutland, as well as an apt place to cross the river. According to sources kept in the Danish National Archives, the Danish king Erik Klipping crossed the river precisely at Svostrup in 1280. The early foundation of Svostrup Kro is therefore likely to date back to that time.

In 1834 the innkeeper at Svostrup Inn got the royal privilege of both inn and ferry service by the king Christian VIII. 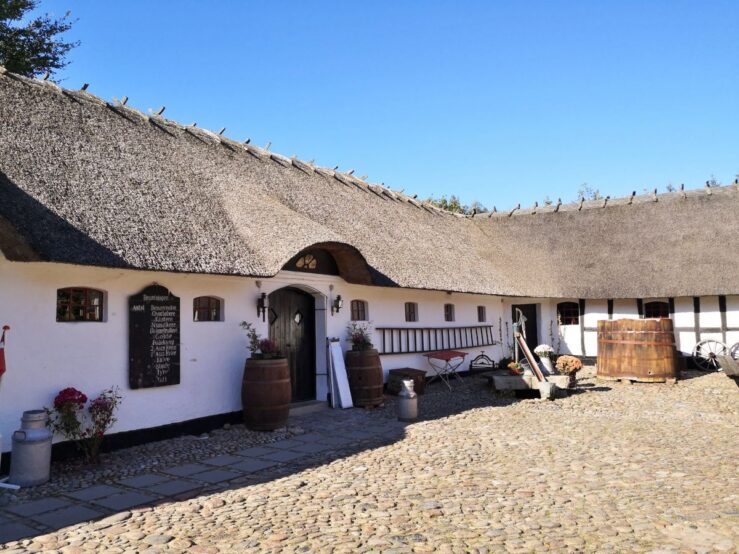 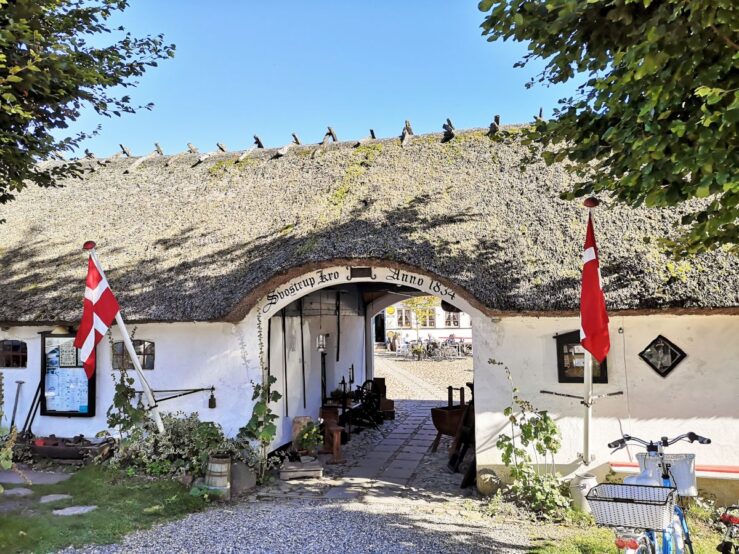 Just south of the bridge you will pass the location of the old ferry-place.

From 1856 the inn service at Svostrup Kro was extended to include a grocer’s as well as a small post office. With the addition of a 2-storey warehouse, Svostrup Inn became a thriving and popular place for storage of grains and other goods to be traded along the river.

The towpath, Trækstien, also known as Pramdragerstien (‘pramdrager’ is the Danish term for the people pulling the barges up the river), is the historical towpath along the River Guden in Jutland between Randers and Silkeborg across meadows, fields and forests. 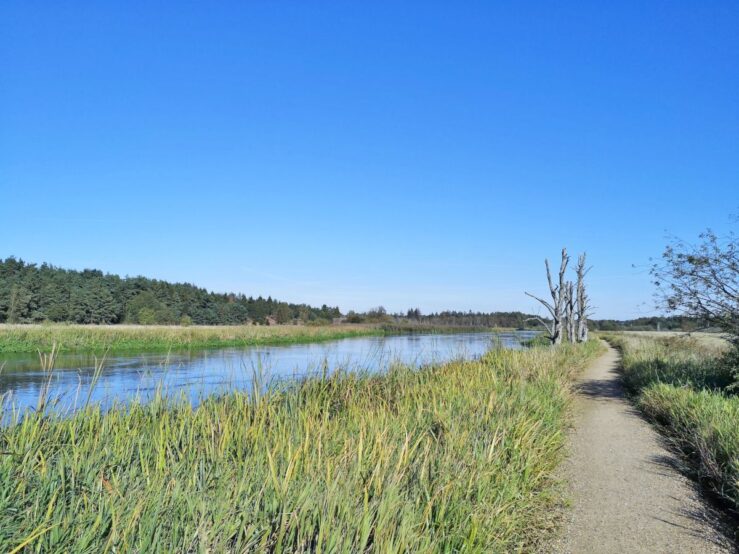 The path is at least 200 years old. From ancient times people have used the River Guden to transport all kinds of goods before the existence of roads and railways. Paper, grains, peat, bricks and other materials were transported on barges on the river road.

In particular, from the 1840’s onwards the barging industry developed with the establishment of the paper mill in Silkeborg. A dirt road along the river emerged where men and horses dragged the barges upstream.

In its heyday around the 1860’s there were around 200 barges going up and down the River Guden. The river traffic was lively right until the establishment of the railway between Silkeborg and Skanderborg in 1872. From that point in time it was gradually reduced, since the railway wagons took over. With the establishment of the hydropower plant at Tange in 1926, which blocked the river, the barging service on the River Guden came to an end. 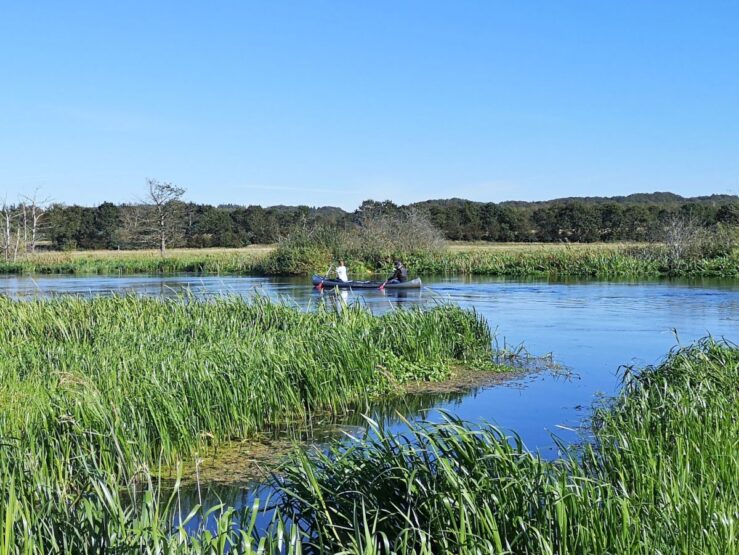 Today, the traffic on the river has changed into recreational canoeing, and with the reestablishment of the 70-kilometre / 44- mile Trækstien, it is now also a popular hiking route with breathtaking views of the river landscape featuring a rich birdlife.

The Towpath is really unique since it is the only trail in Denmark where you can hike following the course of the river just beside it.

For many years the path was not maintained and tended to disappear into swamp-like areas when the fields and meadows were flooded. 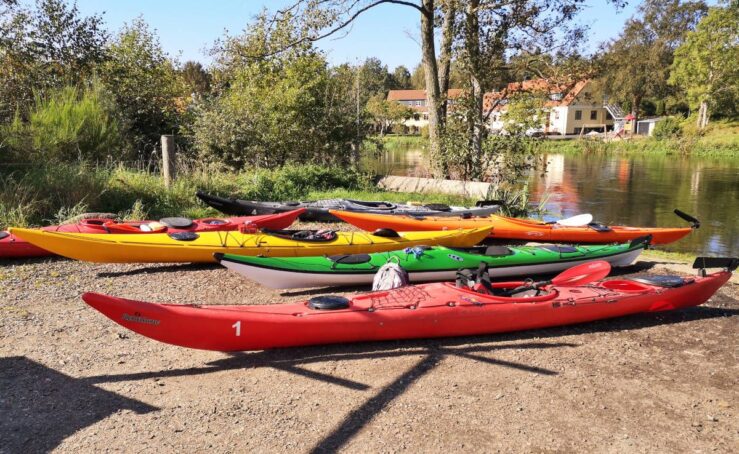 The River Guden snakes through the landscape on a northward course through central Jutland, gradually increasing its width until it reaches Randers Fjord. On its way down from the Jyske Højderyg (the not immediately noticeable north-south ridge – since the elevations in Denmark are not very pronounced), it traverses and merges into a number of lakes.

However, the old Pramdragerstien has been recently renovated between Silkeborg and Kongensbro by Naturstyrelsen and Silkeborg Kommune. Supposedly, it is accessible around 10 months per year. The path has been elevated 0.5-1 m with a thick layer of gravel to resist seasonal floodings as much as possible. It therefore most of the year appears as an appealing hiking path for visitors. A few months every season it will likely be flooded. This actually happened just after the renovation, in autumn 2019.

You can opt to hike, jog or bike along the river, or do the river in a canoe or a kayak. You will find designated spots for raising your tent just off the River Guden. Moreover, the authorities have provided service facilities like picnic tables and platforms along the old Pramdragerstien, such that the historical route can again attract people.

Read next: Vorupør on Denmark’s West Coast and Sailing on the Sand and Discovering Rømø’s Whaling Past 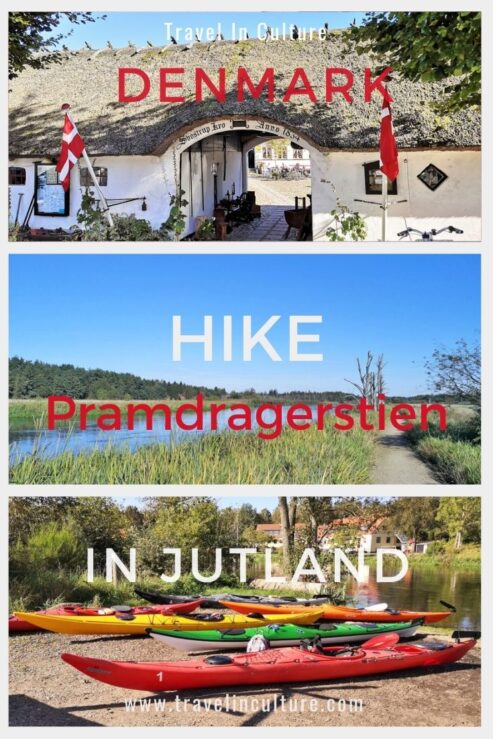 Featured image of
Towpath Pramdragerstien in Jutland:
Travel In Culture