↓
DENMARK  What to see and do in Aarhus in the heart of Jutland, if you want to cover both famous cultural top sights, as well as unique and popular local places?
Ainnelise Niyvold Liundbye
This page has affiliate links (if you purchase through our links, we get a small commission at no extra cost to you - thank you!), see our Privacy Policy & Disclaimer.
Table of Contents

-> Where to stay in Aarhus?

Maybe it is not your first time in Jutland and Aarhus, or maybe you just seek something different from the ‘usual’ museums and tourist attractions – although still wanting to include a few of the famous top sights. If this is the case, you may find inspiration in our top 9 list of sights in the city, which also includes places being extremely popular with the locals. 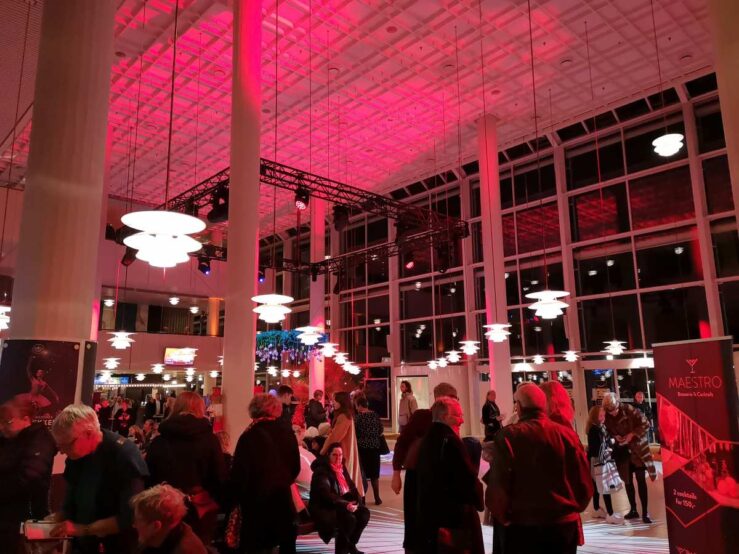 Aarhus Concert Hall, or Musikhuset, located next to ARoS, is a venue for music performances in Jutland, designed by Kjær & Richter and built in the years 1979-1982 – and today one of the top sights in the city!

It is the largest concert hall in Scandinavia with a seating of more than 3,600 people. Musical performances take place in one of the six concert halls, including the Large Hall, the Rhythmic Hall, the Symphonic Hall and the Chamber Music Hall, or in the spectacular foyer with glass façades on three sides! The Concert Hall provides the perfect setting and stage for any kind of concert, opera, ballet, musical, show, exhibition or business arrangement.

Exiting the Concert Hall building complex, you will step out into a garden-like sculpture park, designed by the landscape architect Sven Hansen.

The Concert Hall is also home to Den Jyske Opera and Aarhus Symfoniorkester. 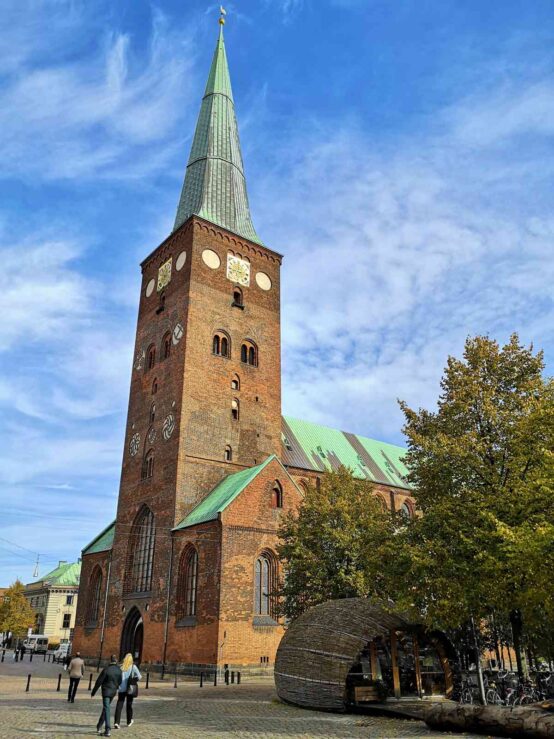 Construction of the Cathedral began in the 1190s initiated by bishop Peter Vognsen, and in the years of construction a cathedral school, Aarhus Katedralskole, was also begun. The Romanesque church building was completed in 1300, and it was dedicated to St Clement, who was the patron saint of sailors. Only a few years later, in 1330, the Cathedral unfortunately burned down. It was left in ruins until 1449, when it was rebuilt and enlarged in the new Gothic style.

Aarhus Cathedral is adorned with a number of fresco paintings from 1470-1520, the Lazarus Window, painted around 1300, and a stained glass window by the Norwegian artist Emanuel Vigeland from 1926.

A wrought-iron “Golden Door” separates the nave from the choir. Other noteworthy parts are the copper baptismal font, the carved altarpiece with movable sections and the Baroque-façade pipe organ. 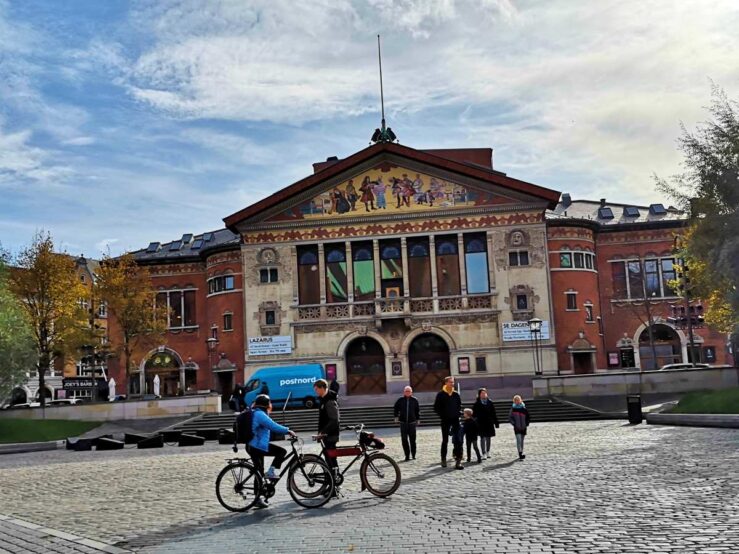 Aarhus Theatre is one of the historical theatres in Denmark. It was designed by Hack Kampmann in the Art Nouveau style popular at the time, and inaugurated in 1900. The Holberg characters appearing on the façade fresco are attributed to professor Hans Tegner. The construction of Aarhus Theatre was initiated by a group of eager citizens and replaced an old theatre, known as ‘Svedekassen’.

The theatre features four stages and has around 100,000 visitors annually. A varied repertoire is played during the season September-June. Both own productions and guest performances are part of the broad repertoire.

Aarhus Theatre is one of the top sights and popular cultural offer in Aarhus, which with its wide range of performances is aimed at all age groups and draws people from near and far in Jutland. 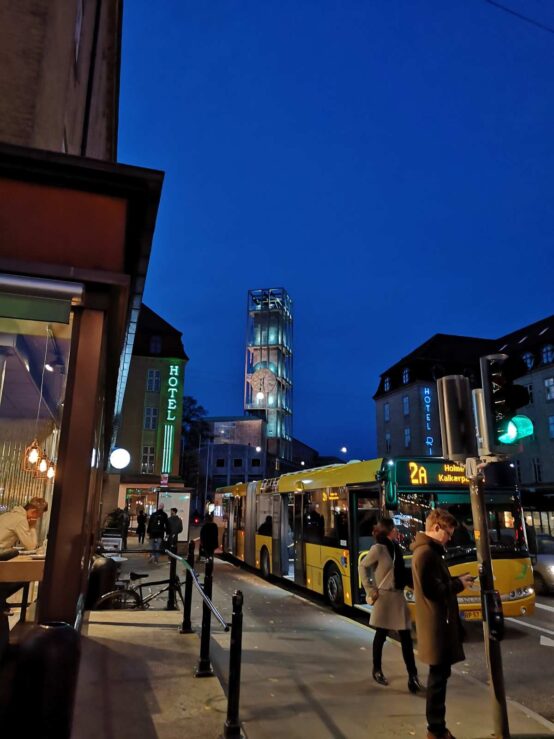 Built after the design by Arne Jacobsen, Aarhus City Hall, or Aarhus Rådhus, has with its unique architectural style become a landmark of Aarhus. Arne Jacobsen and Erik Møller won a design competition in 1937 to design the new City Hall. At first the project didn’t include a tower.

Nevertheless, people required a tower for the City Hall! So the architects had to add this element, resulting in the present 60-metre rectangular structure. In the beginning the Aarhus citizens did not really like the scaffolding-like tower, but with time the remarkable marble tower with six balconies and two clock faces has become real iconic in Aarhus.

Today, the City Hall stands as a functionalistic building which houses Aarhus Municipality. In addition to being an administration building, it hosts a wide range of events and guests throughout the year.

Guided tours of the City Hall are available.

The Botanical Garden in Aarhus features plants from distinct habitats in Denmark, a section of old medicinal plants and a rockery with plants from mountainous regions found worldwide. It is a lovely park, frequented by tourists, students, families and other citizens who use the green spaces for a picnic or other leisurely activities.

One of the more recent approaches is the establishment of a new Tropical House section, Væksthusene, of the Botanical Garden. It boasts some amazing greenhouses with tropical and subtropical plants from the rainforest. You will find vegetation from all four different climate zones. Explore the stunning flowers and fascinating plants here and learn about their functions in their respective natural habitats. 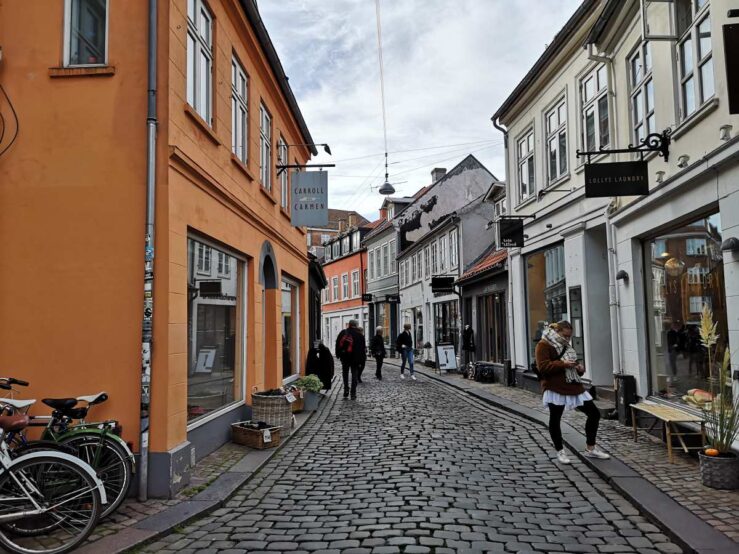 The cobblestone picture-postcard Latin Quarter is one of the oldest quarters in Aarhus. It arose in the 14th century as one of the first new parts of Aarhus after the Viking Age. Meandering around, you will notice the still-existing, old street names such as Klostergade, Guldsmedgade, Mejlgade and Graven.

The Latin Quarter is the perfect setting for cosy cafés and small boutiques, which you will find along the streets located around the main square Pustervig. Some of the current houses date all back to the 16th century.

Aarhus Latin Quarter features a pronounced cultural life with live music, studios and galleries for everyone to visit. Its name can be attributed to the comparable, although much bigger, neighbourhood in Paris, the Quartier Latin – the Paris Latin Quarter. 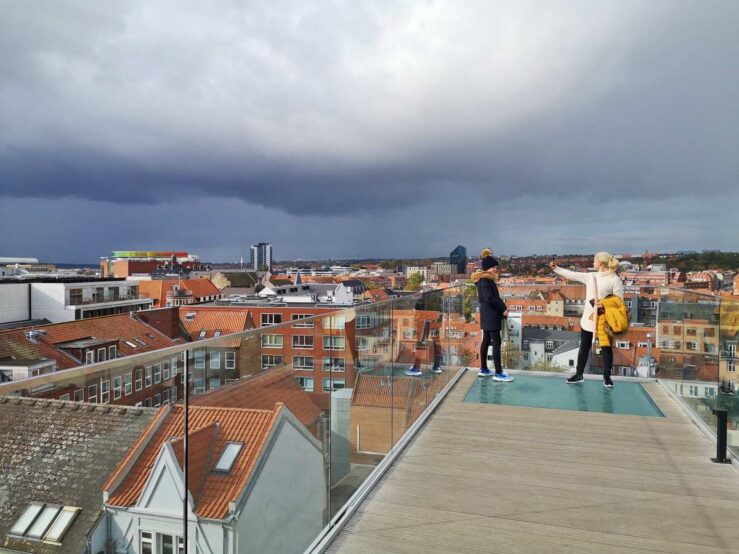 Nowhere else in Aarhus will you find such a cool roof terrace as on top of the Salling department store – featuring both lounge areas, a city park (the most recent extension) and a stage. With its location above the city roofs, it offers the rare opportunity to get a 360-degree panoramic experience over the city of Aarhus.

At the same time it is a popular open-air bar and café, particularly on sunny days, where you can enjoy a meal, a drink or a cup of coffee. You may listen to the DJ’s music if you are here on the right day or evening.

Step out from the building on a glass platform and enjoy the views of the pedestrian street from above. This may well be a transboundary experience!

Godsbanen (meaning ‘goods station’) is one of the newer projects and creative spaces in Aarhus. It is a centre for cultural productions in terms of artistic disciplines such as theatre, dance and photography.

The site is the old goods station in Aarhus from 1923, which for many years handled all the freight trains transporting goods to and from other places in Denmark along the rail lines. It was originally built on the swamp-like grounds outside the city, after filling the area up with appropriate material. Hack Kampmann was one of the influential people behind the project.

The goods station operated right until 1997, when an accident unfortunately happened. From year 2000 there were no longer any train activity at the former station.

After the close-down the buildings were transformed into the current cultural production centre, and it is today a popular site for creative purposes – one of the really hip projects in a new Aarhus neighbourhood! At Godsbanen you will find studios, project rooms, stages, dance halls and auditoria, beside an unpretentious café and restaurant.

9 Top sights in the heart of Jutland 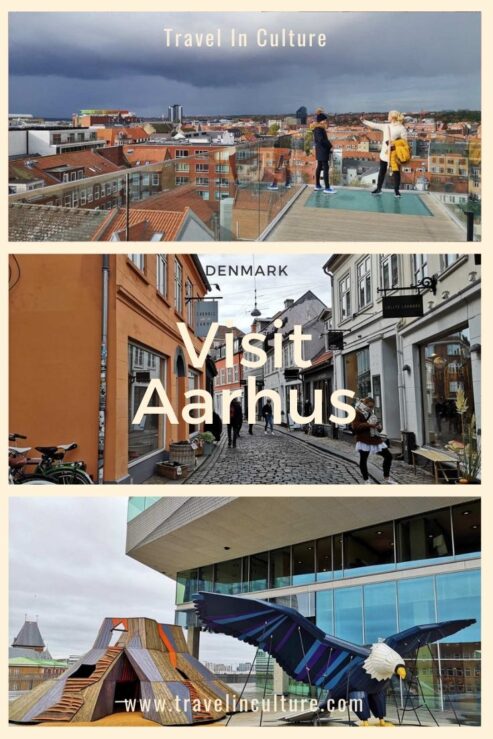 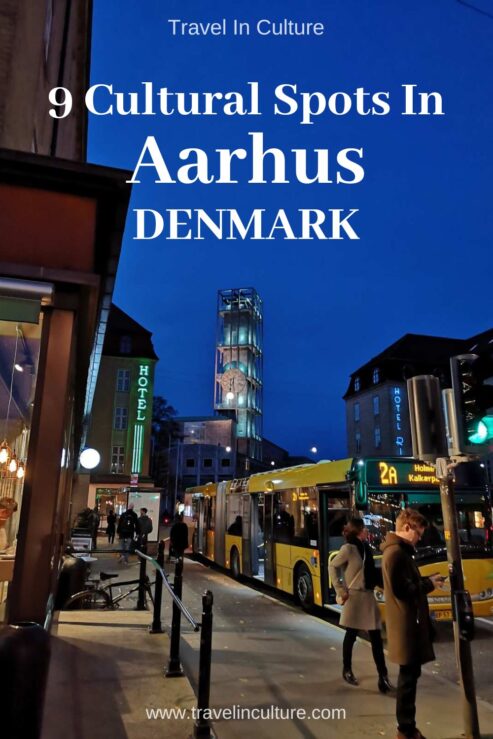 Aarhus Street Food opened in 2016 in an abandoned bus garage near the Central Station. In an authentic setting a wide range of the world’s cuisines are sold here under the same roof. It is a blend of international simple quality food served between the concrete walls in the spacious building.

Most often bustling with people, the food market is a vibrant place with all the soft smells mixing around the central tables. It is both an affordable and fast experience to have a bite here together with students, families, tourists and whoever finds their way to the new gastronomic market in Aarhus.

It ranks high and is definitely an enticing food option to squeeze in between other activities in Aarhus.

Read more about interesting places to visit in Aarhus: 9 Cultural Spots in Aarhus

Read next: Visit Ribe in Denmark and Hike the Towpath Pramdragerstien in Jutland


Featured image of
9 Top Sights in the heart of Jutland:
Travel In Culture

Top Sights in the heart of Jutland