↓
AUSTRIA  Innsbruck in Austria is a charming city, nestled into the Tyrolean Alps, with a delightful historic old town centre. Within just a few hundred metres in central Innsbruck, you will be able to explore the fascinating cultural heritage and history of the Habsburgs.
Ainnelise Niyvold Liundbye
This page has affiliate links (if you purchase through our links, we get a small commission at no extra cost to you - thank you!), see our Privacy Policy & Disclaimer.
Table of Contents

-> Where to stay in Innsbruck?

In a picturesque mountainous setting, surrounded by high, rugged alp peaks, you arrive at Innsbruck – the capital of the Tyrolean Alps in Austria. The surroundings are in fact the perfect setting for both summer activities and popular winter sports, and Innsbruck features for example a ski jump (Bergisel Ski Jump), an alpine zoo (Alpenzoo Innsbruck), and has been the chosen location for the Winter Olympic Games in Austria in 1964 and 1976. You will easily reach the Nordkette range by the convenient cable car, departing from the historic centre, for unrivalled views of the mountainscape.

Moreover, Innsbruck is a vibrant Tyrolean city both in terms of ambience, traditions, and gastronomy. There is also ample opportunity to acquire a traditional Tyrolean dress, a dirndl, or maybe a pair of classic lederhosen in one of the small souvenir shops that are located everywhere. When hunger strikes, you can try one of the open-air restaurants in the Market Square at Markthalle with its popular stands and stalls with drinks, food specialities and handcrafted products.

Inspiration: What to Do in 24 Hours in Vienna and Salzburg – Mozart’s Birthplace

In addition to its immediate idyll, Innsbruck has everything you can wish within culture and cultural heritage: a 17th-century university: the Leopold-Franzens-Universität, the Tyrolean State Theatre, impressive palaces, imposing churches, a Capuchin convent, as well as extraordinary museums that cover the city’s history.

The museums include the Tyrolean Folk Art Museum, the Tyrolean Provincial Museum, the Maximilianisches Zeughaus, the City Museum, as well Tirol Panorama, a museum providing an overview of Tyrol’s history including a fabulous panoramic 360-degree painting of the battle that took place in Innsbruck in 1809 with participation of the forces of Emperor Napoleon I of France.

1. The Bridge over the Inn 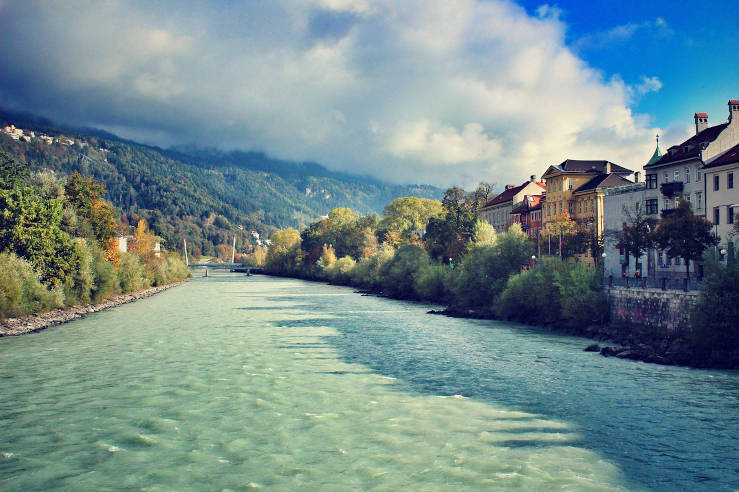 Innsbrucks strategic position on the trade routes from Italy to Germany via the Brenner Pass, as well as to other parts of Western Europe, caused the small market town, that had been established by Bavarian Andech counts, on the northern riverbank to expand in the 1200s. The traffic would pass the Inn River here – over the Inn Bridge, or Inn Brücke, giving rise to the name ‘Innsbruck’. The city of Innsbruck became the capital of Tyrol in the 1420s.

Today, the picture-postcard Inn River and the Old Inn Bridge over the Inn, connecting the original northern town with the later historic town centre on the opposite riverbank, are still the quintessence of Innsbruck. In fact, the bridge is still on Innsbruck’s seal and coat of arms! 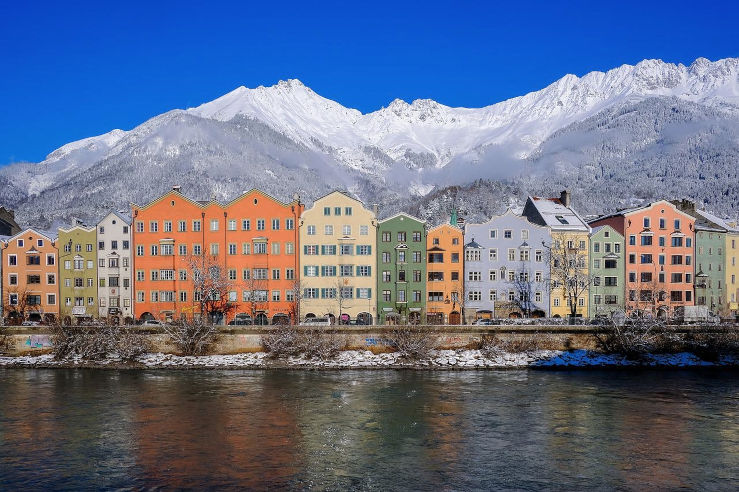 A stroll along the Inn River will reveal the famous, picturesque row of colourful houses at the district Mariahilf – St Nikolaus, which contribute to the scenic beauty of the historic city. The first settlement here was founded around 1165. Noteworthy sights on this side of the river include the Mariahilf-Kirche from 1649, as well as the Farmers Market St Nikolaus. 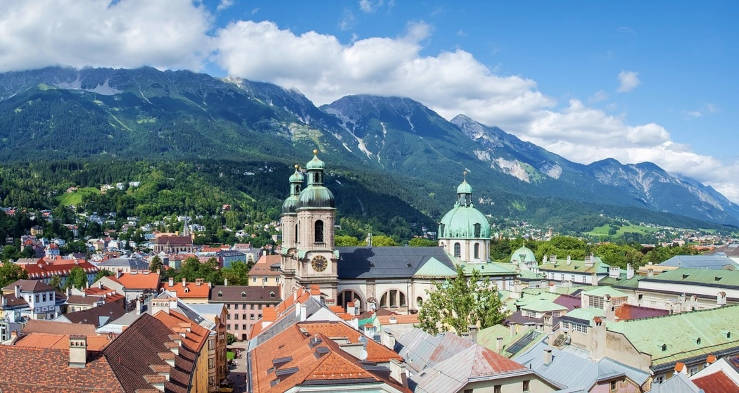 The Innsbruck Hofburg, the Imperial Palace, is located on the southern riverbank just a stone’s throw from today’s vibrant old town streets of quaint medieval houses in pastel shades. It is an outstanding piece of architecture from the era when the Habsburg dynasty ruled.

From its early beginnings in the 14th century, when Berthold V of Istria established the old town encircled by a moat, as well as a city wall on the southern riverbank, the foundation for the later historic centre of Innsbruck was laid. During the following centuries, the Hofburg and its related structures and churches were built, as the Habsburg family came into power (which happened in 1363).

Empress Maria Theresa, who was the ruler of the Habsburg dominions 1740 – 1780, left her mark on the court palace by remodelling it in baroque and rococo styles in the 18th century.

Must-sees inside the Hofburg are the spectacular Hall of Giants, the Baroque Cellar, as well as Maria Theresa’s apartments with beautifully painted ceilings.

The Golden Roof, or Goldenes Dachl, at the end of Hofgasse is also from Innsbruck’s heyday (the 15th to 18th centuries). The façade is a late Gothic bay window, with 2,657 gilded copper roof tiles, which was added to the house in 1496 by Emperor Maximilian I. At the time it served as a viewing platform for the court to watch festivities in the adjoining square. 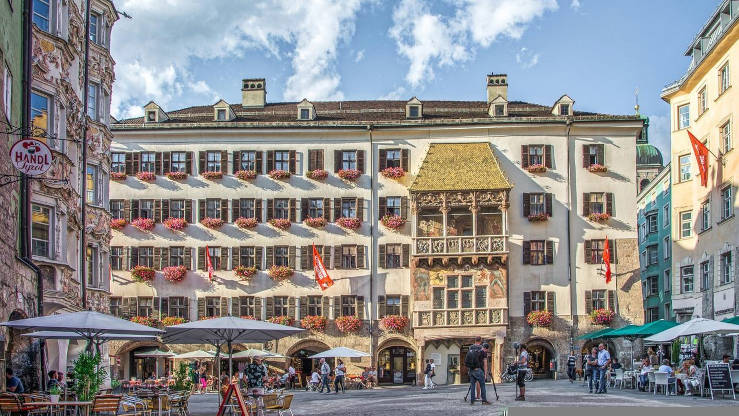 Many townhouses and former merchants’ houses around Goldenes Dachl have beautiful, lively façades adorned with motifs from the history, sculptures and maybe a bay window – and are fine examples of traditional Tyrolean architecture. Some of the late Gothic-style buildings have painted frescoes on their façades, and others have arcaded façades and stucco in a sumptuous baroque or rococo style.

The Innsbruck relief-covered house with the Golden Roof is today a museum showcasing the life of Maximilian I and the history of this region in Austria in the Middle Ages.

Another sight tucked in between the narrow, stunning streets in the well-preserved triangular square in Innsbruck’s medieval old town is the 57-meter high City Tower, or the Stadtturm. It was used as a watchtower where officers on duty kept an eye out for fires in the city. In the past the lower floors of the tower also served as a prison. 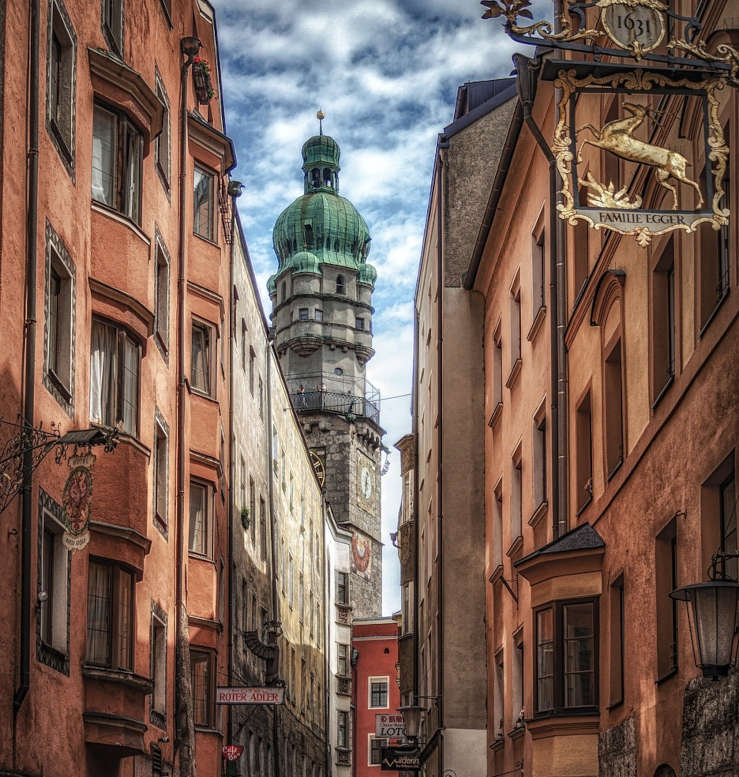 Adjacent to the 15th-century watchtower is the historic Town Hall from 1358 which housed the city authorities right until 1897. Its façade is ornamented with a relief of Innsbruck’s coat of arms.

Atop the Stadtturm there is an observation deck where visitors will be able to enjoy panoramic views of the city and the surrounding mountains.

The Court Church or the Imperial Hofkirche, is also known as the Schwarzmanderkirche (Church of the Black Men) or Franziskanerkirche. It is yet another landmark in Innsbruck that is part of the Habsburg Empire Heritage in Austria. The Gothic church, one of the finest in Innsbruck, was together with the adjacent Franciscan monastery built in the 16th century by Emperor Ferdinand I. 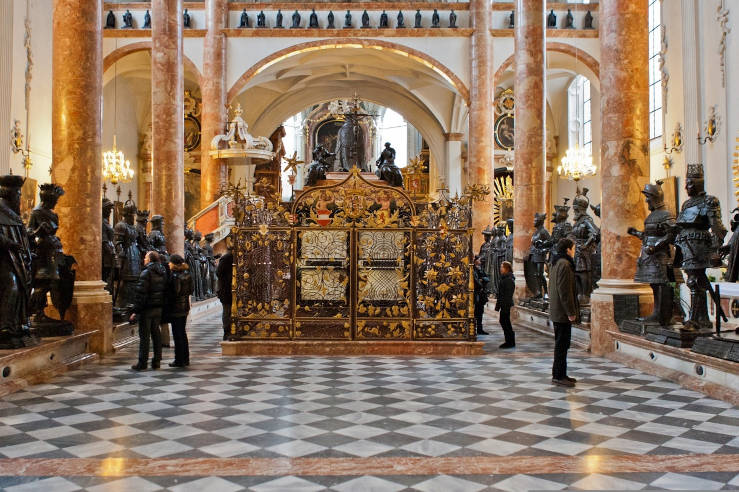 Inside the Hofkirche is a large black marble sarcophagus and the tomb of Maximilian I surrounded by 28 larger black bronze statues of primarily family members of the Habsburg dynasty. The Renaissance statues were created by various sculptors in the years 1502 – 1555. However, the mausoleum dedicated to Maximilian I is a purely ceremonial tomb since there is no body inside.

As a curiosity even King Arthur of England is sculptured here, and this statue is considered the probably finest statue of a knight within Renaissance art. 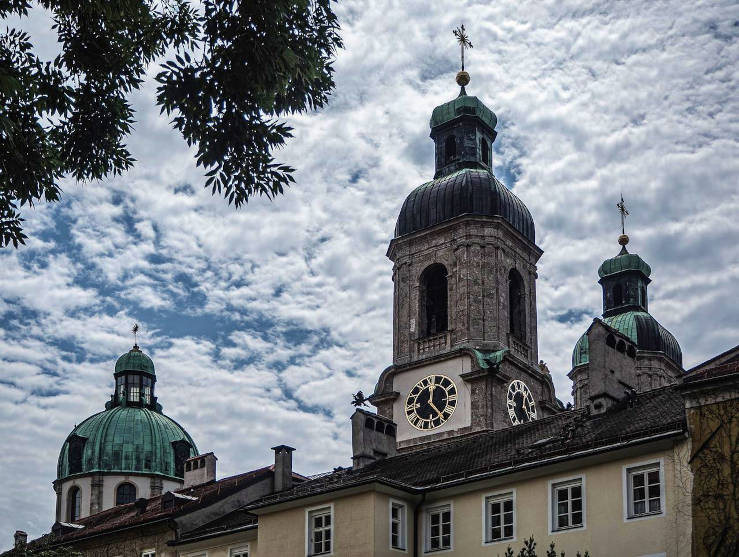 The Cathedral is renowned for its imposing twin towers and spectacular dome – despite its rather modest exterior. Inside, however, it is sumptuously ornamented in a baroque style using marble in many shades, and St James features both outstanding frescoes and fine stucco work. 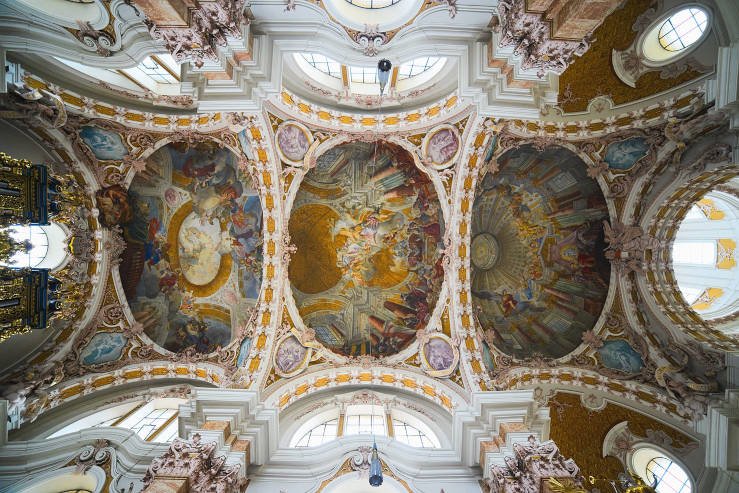 One of the highlights is the baroque marble altar depicting the masterpiece Maria Hilf by Lucas Cranach the Elder. Other highlights include the 18th-century pulpit and the glorious ceiling paintings.

Another landmark from the Habsburg era is the Triumphal Arc, or Triumphpforte in German, which is located at the end of Maria Theresien Strasse. 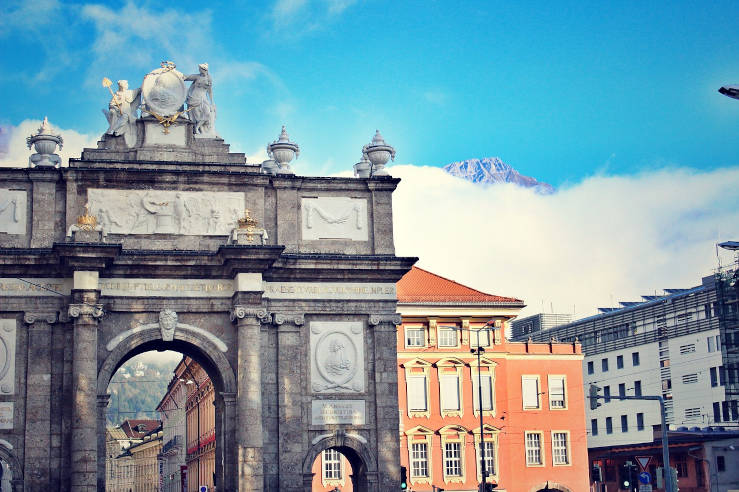 The famous arc was erected by Empress Maria Theresa in 1765 to celebrate the wedding between her son, Archduke Leopold (later Emperor Leopold II), and a Spanish princess, Maria Luisa (Ludovica). As a curiosity, the stones used for the construction was pure recycling of the stones from the gates of Innsbruck’s old city wall!

The arch also commemorates the Archduke’s father who died unexpectedly shortly after the wedding.

Maria Theresien Strasse is a major pedestrian artery in Innsbruck. It is the continuation of the more centrally located pedestrian street Herzog Friedrich Strasse. 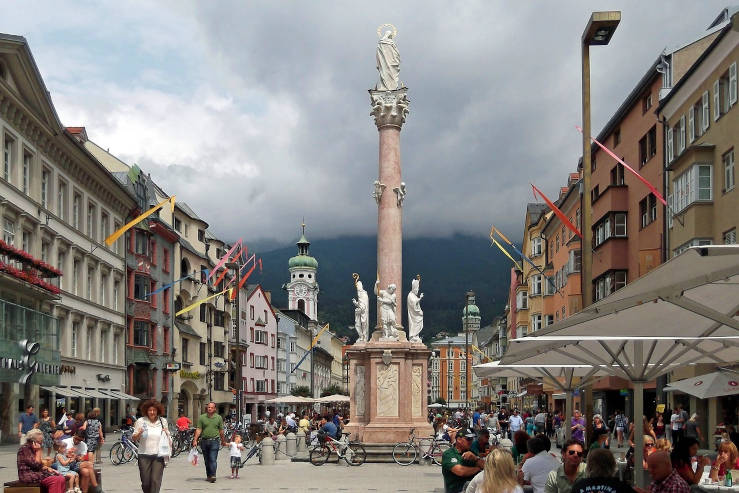 The wide shopping strip lined with baroque architecture features noteworty buildings such as the Town Hall and the baroque-style Altes Landhaus from 1728. The street is a wonderful mix of old and new – the historic 17th- and 18th-century houses are located right next to more modern complexes such as the Kaufhaus Tyrol, designed by David Chipperfield.

One of the top sights to be found in the middle of Maria Theresien Strasse is the St Anne’s Column (Annasäule). It was constructed in 1706 to commemorate the retreat of Bavarian troops on St Anne’s Day, taking place three years earlier.

Read next: Summer in the Austrian Alps in Tyrol and Hiking in the Bavarian Alps