↓
AUSTRIA  You cannot visit Salzburg in Austria without stumbling across the unique composer Mozart at numerous locations around the city. Besides visiting Mozart’s Birthplace, there are many other fascinating things to do in Salzburg which is an old salt city, located in an alpine setting.
Ainnelise Niyvold Liundbye
This page has affiliate links (if you purchase through our links, we get a small commission at no extra cost to you - thank you!), see our Privacy Policy & Disclaimer.
Table of Contents

-> Where to stay in Salzburg?

A House for Mozart serving as a theatre of the Salzburg Festival, Stiftung Morzarteum as a concert hall, a Mozartplatz that is a square with a statue of the world-famous Mozart, a Café Mozart, the Universität Mozarteum Salzburg, Mozart’s Birthplace, as well as the Mozart Wohnhaus. These places in Salzburg, and quite a few more, have been named to commemorate the composer and virtuoso Wolfgang Amadeus Mozart whose birthplace was precisely here in Salzburg, Austria, and many of them will naturally be part of the things you will want to see and do when visiting the city.

The city has a long and rich history from initially being an old Roman settlement in the Holy Roman Empire, later, an archbishopric – to today being a modern and vibrant city in Austria with a university, several art museums, and various other cultural things to do such as participating in the annual Salzburg Festival, as well as enjoying the marvelous alpine surroundings.

Salzburg is an old salt extraction site in Austria with the Salzach River running through the historic city – used until the late 1700s as a transportation route (subject to a toll) for salt on barges from Hallein and other nearby mining locations. In addition to the salt extraction, also gold mining took place around Salzburg centuries ago. In the 17th century, monasteries and impressive baroque churches were constructed here under influence of Italian architects – the part of the city that is today the historic centre (Altstadt – The Old Town). Salzburg is notably one of the most well-preserved cities north of the Alps and today a UNESCO World Heritage Site.

Inspiration: What to Do in 24 Hours in Vienna and Explore the Cultural Heritage of Innsbruck 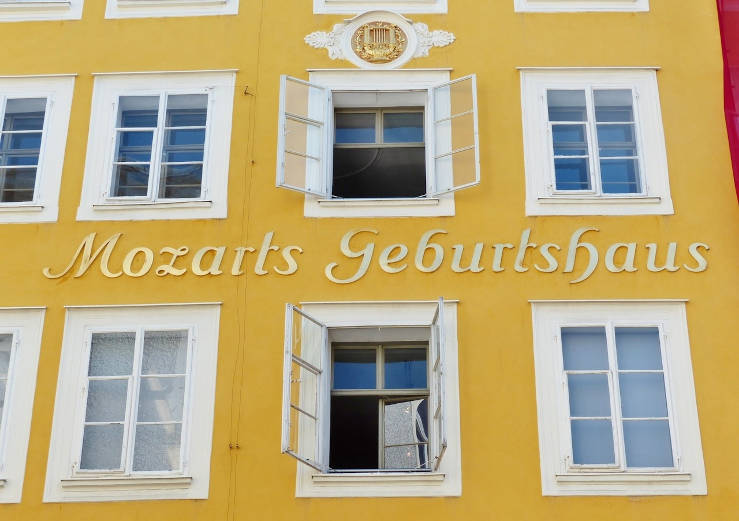 A must-see and a highlight is Mozart’s Birthplace at Getreidegasse No. 9 in the Old Town of Salzburg. Wolfgang Amadeus Mozart was born here on the third floor in 1756, and you can today visit his birthplace, which is now a museum. The house used to be known as the ‘Upper Hagenauer House on the Fish Market’. Inside the Mozart Birthplace you can take a tour to gain insight into Mozart’s life and the past everyday life here in the furnished 18th-century middle-class house that takes you back in time. Also, authentic musical instruments formerly belonging to Mozart can be viewed here. 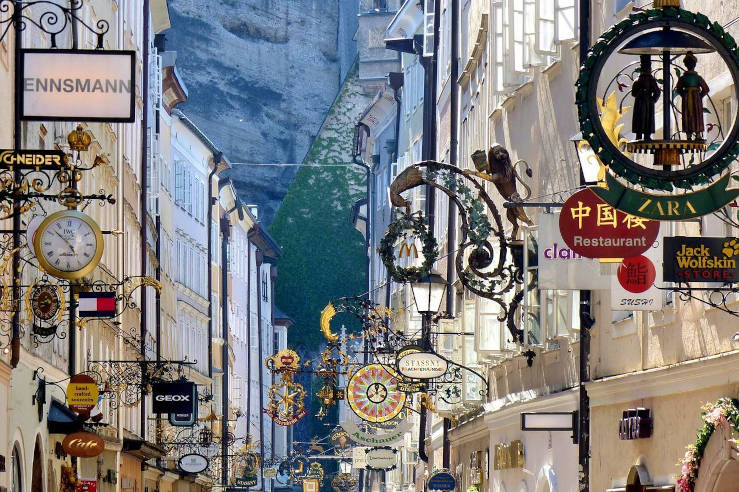 In 1773, Mozart’s family moved from his birthplace to another house at the Makartplatz, now known as the Mozart Wohnhaus, a house that has today been turned into a museum too.

Mozart was exceptional, a one-of-the-kind who achieved extraordinary and unparalleled results in his work. He was a musical prodigy, multitalented on both the violin and the piano, and started composing at the age of 5. Although he died already when he was 35, he managed to compose over 600 pieces of music! Due to his outstanding achievements, he is considered one of the greatest composers ever. 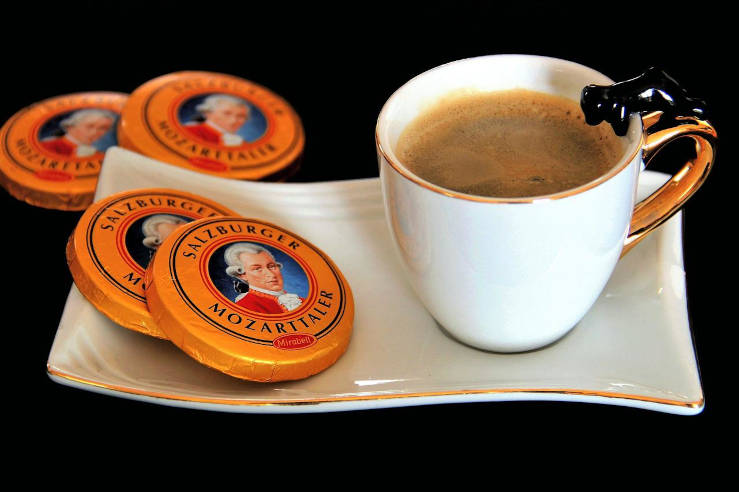 Today Salzburg is full of Mozart – with a plethora of places named after him, reminding everyone of the fame, musical legacy, and achievements of the talented composer from Austria once born here. However, there is no doubt that Mozart’s birthplace remains the top attraction in Salzburg! Mozart is really the city’s theme – even Mozart chocolates are sold everywhere – for instance in the charming historical Getreidegasse where you can also try a coffee speciality and an apple strudel – or the Salzburger Nockerl at Café Mozart! The vibrant street features fine examples of traditional doorways and the particular through-houses. Of course, you can also decide to come for the Mozart Week, a traditional festival where the composer’s music of course is in focus. 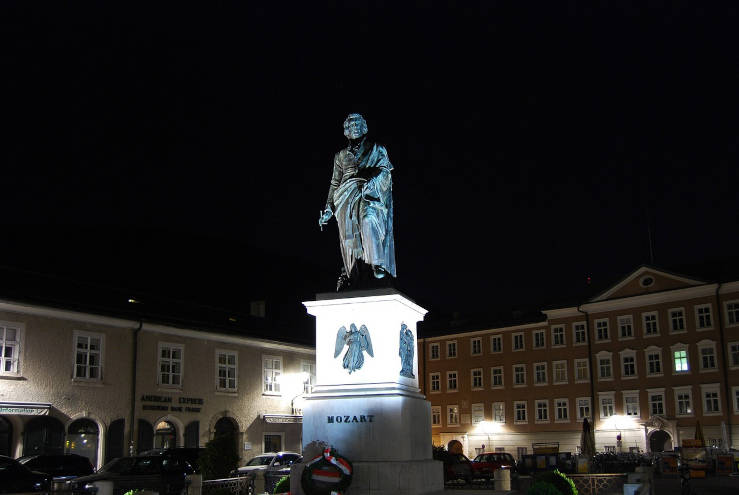 The 17th-century baroque Salzburg Cathedral (Salzburger Dom) of the Roman Catholic Archdiocese of Salzburg is located in the heart of the city and contributes together with Hohensalzburg Fortress to the characteristic Salzburg skyline. 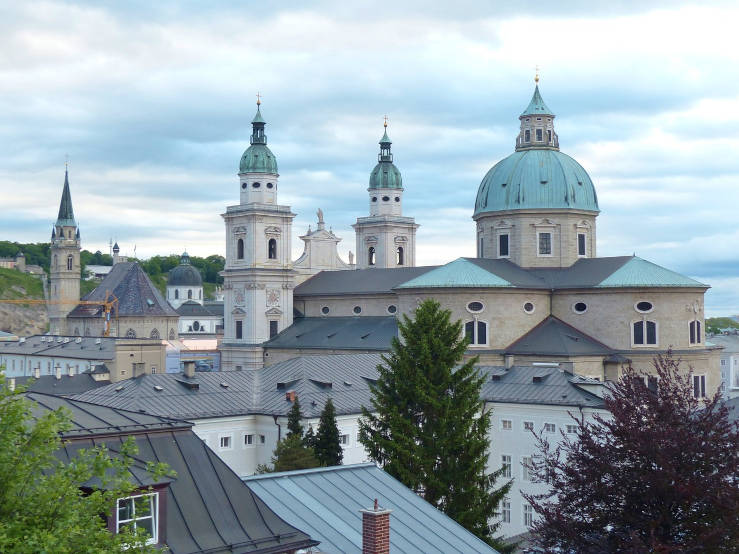 With its spectacular dome and two towers it is one of the most impressive constructions in Salzburg to visit and definitely one of the top things to do in the city.

The highlights of the magnificent cathedral include the baptismal font (where Mozart was christened), the crypt, the façade made of Untersberg marble, the cathedral gates (Faith, Love and Hope) by Schneider-Manzell, Mataré and Manzú, seven remarkable and named bells, as well as the relics of the Saints Rupert and Virgil – to whom Salzburg Cathedral is dedicated. 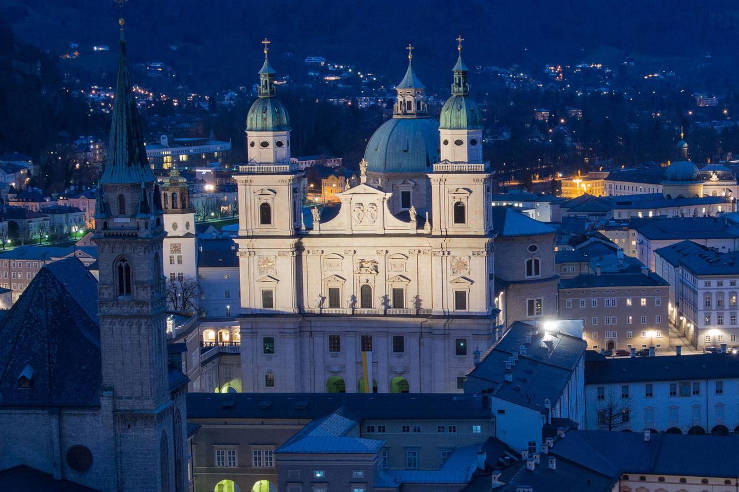 Surrounding the cathedral construction, three beautiful squares have been created: the Domplatz with the Mariensäule, the Kapitelplatz with the Goldene Kugel – ‘Sphaera’ – by Stephan Balkenhol, and the Residentzplatz in front of the UNESCO World Heritage Site baroque complex DomQuartier Salzburg. 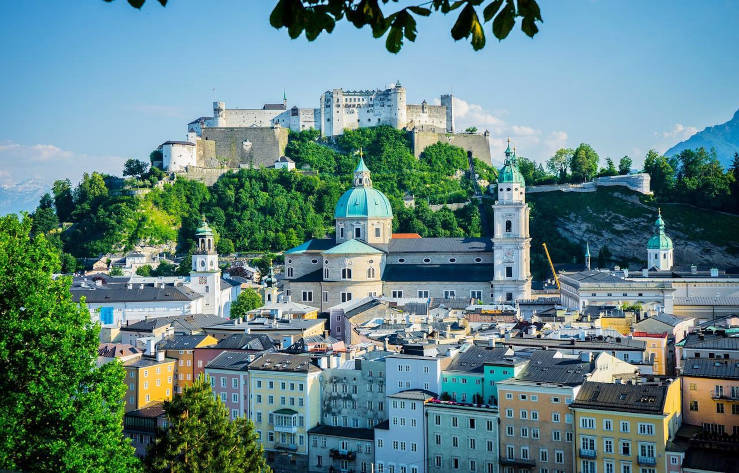 The imposing and eye-catching fortress of Hohensalzburg, which can be viewed from afar, is one of the largest medieval fortresses in Europe. It was constructed in 1077 by Archbishop Gebhard – and continuously expanded in the following centuries.

The landmark is placed atop the Festungsberg at an altitude of 506 metres, and it is a splendid fortress construction, in the past serving to protect and defend the city. Initially, it was a very simple fortress, but significant improvements took place in 1462, when Cardinal Burkhard II added both thicker walls and more towers to the fortress. Due to its altitude and invincibility behind the castle walls, no enemy ever posed a real threat to it. 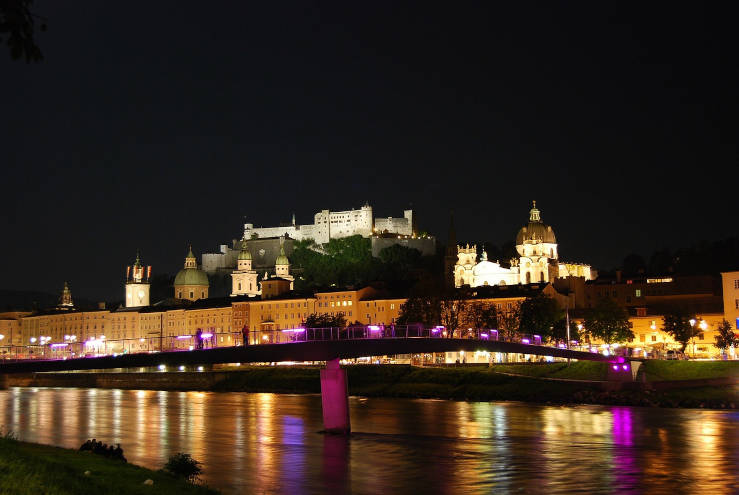 In the 1500s, Hohensalzburg Fortress was again remodelled, and it got its particular, odd coat of arms – representing a lion holding a turnip! Also, the inside of Hohensalzburg is enticing to visit. The fortress holds a remarkable collection of historical artefacts that gives insight into its captivating story.

Among the absolute top things to do in Salzburg is also a visit to the beautiful palace, the Mirabell Palace (Schloss Mirabell). It is located on the northeastern riverbank of Salzach and belongs to the buildings in Salzburg that are on the cultural heritage listing. At first it was named Altenau – before later being changed to the current name which is derived from ‘admirable’ and ‘bella’ in Italian. 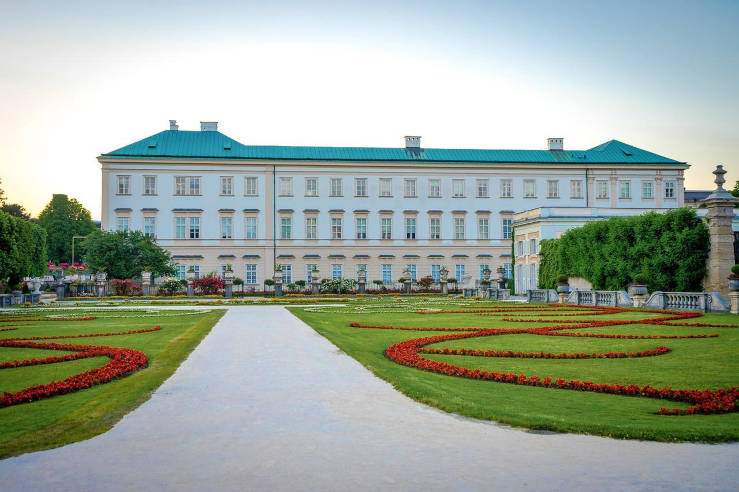 Although constructed as a luxurious pleasure palace in 1606 by Prince-Archbishop Wolf Dietrich Raitenau, it only kept its original appearance for one century, before it was remodelled to reflect the new popular sumptuous baroque style by the baroque architect Lukas von Hildebrandt. However, already in the 1800s, a neoclassical approach was now applied to the Mirabell Palace, and Archbishop Maximilian Joseph von Tarnóczy had his residence here. Finally, in 1866, the City of Salzburg took over the stylish palace.

Today, the location is a popular wedding site with the elegant Marble Hall used as a wedding hall, and the Angel Staircase or Pegasus Fountain as favoured photo shooting locations. The Marble Hall is today also the venue of the renowned recurring Salzburger Schlosskonzerte, which take the guests back to the time when Mozart used to give his concerts here. 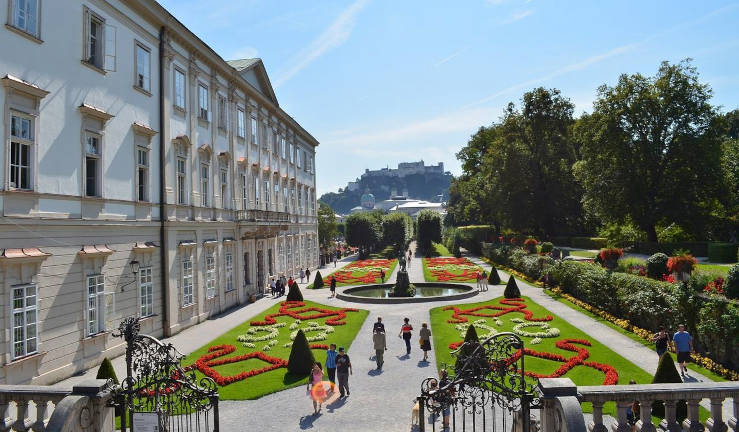 Under Prince-Archbishop Johann Ernst von Thun in the late 1600s, the lovely Mirabell Gardens were laid out with mythological statues created by Ottavio Mosto. It is today a top tourist attraction in Salzburg! 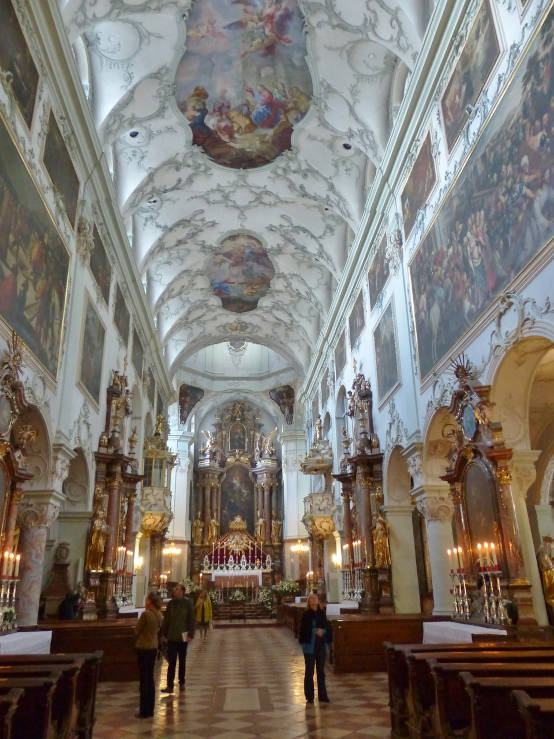 Very close to Salzburg Cathedral, an imposing abbey construction is situated. St Peter’s Abbey dates back to the 7th century where it was founded by a Frankish missionary known as Rupert. One of the highlights of St Peter’s Abbey is the Long Gallery with a painting collection. Another one is the beautiful and unique St Peter’s Cemetery where numerous personalities have been buried.

Most remarkable are probably the catacombs that have served as a practical burial site for many Salzburg residents in the past. St Peter’s Catacombs may seem familiar to visitors since they have been used as a setting in the film ‘The Sound of Music’. 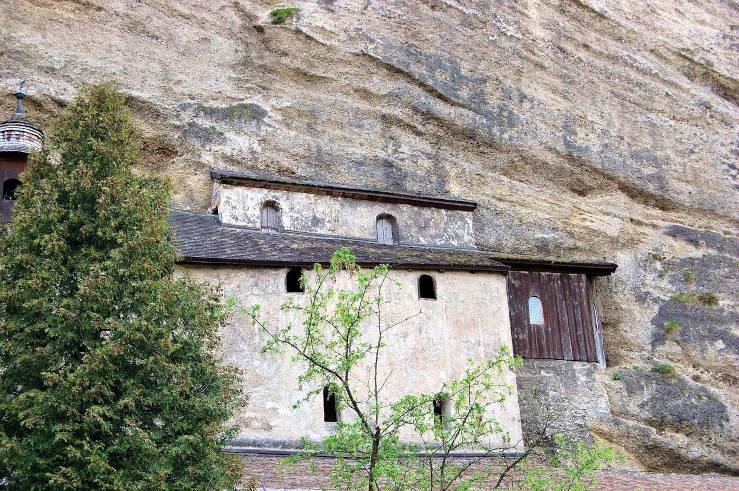 Due to numerous fires over the years, renovations of St Peter’s Abbey in changing architectural styles were repeatedly carried out, resulting in the monastery today being a mix of both Romanesque, Renaissance, and rococo styles.

Famous composers such as Mozart and Haydn both dedicated time and music to St Peter’s. Still today, Mozart Dinner Concerts are held in the Stiftskeller St Peter.

Read next: Summer in the Austrian Alps in Tyrol and Hiking in the Bavarian Alps

Share on Social Media
‘Mozart: 5 Cultural things to do in Salzburg – Austria at Mozart’s Birthplace’

Mozart: 5 Cultural things to do in Salzburg – Austria at Mozart’s Birthplace: