↓
ITALY  The small Tuscan town Lucca is with its multitude of old churches, arched doorways, little piazzas, vaulted passages and columned yards a true gem. Lucca is one of the finest Tuscan towns due to its unique history and extremely well-preserved architecture.
Ainnelise Niyvold Liundbye
This page has affiliate links (if you purchase through our links, we get a small commission at no extra cost to you - thank you!), see our Privacy Policy & Disclaimer.
Lucca – a Tuscan town

-> Where to stay in Lucca

The Tuscan town Lucca is a more peaceful and tranquil place than its more populous counterpart, Florence. It is easier to find a quiet corner here and enjoy a moment alone sensing the breath of history. Only in high season and during the two annual festivals, the summer festival in July and the Lucca Comics & Games in autumn, will the small encircled town be real crowded.

The name Lucca has a Celtic-Ligurian origin ‘Luk’ which means marshland.

Inspiration for Italy: Explore Siena and 3 days in Florence and 5 cream-of-the-crop day trips from Florence 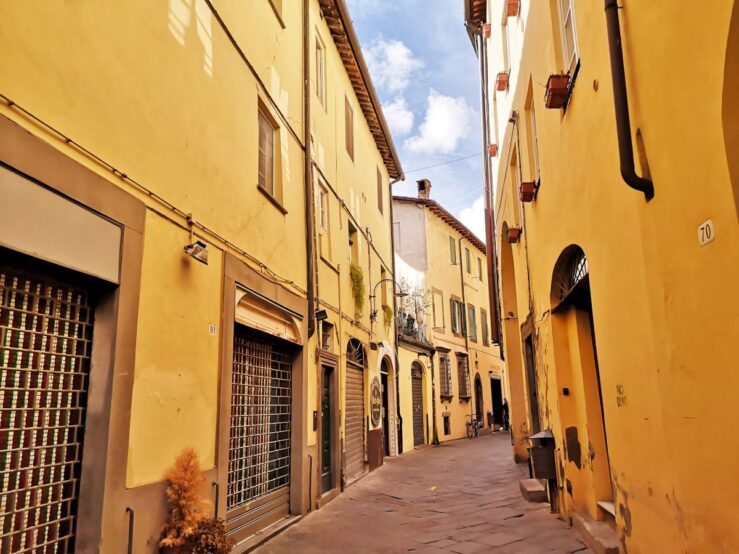 Lucca has played an important role during the history. The Tuscan town became a Roman colony around 180 BC and it served as a meeting place for Julius Caesar, Pompey and Crassus, the political alliance known as the First Triumvirate. In year 56 BC they split the Roman provinces among the three of them precisely in Lucca at the Lucca Conference.

It is generally believed that the foundation of Lucca can be traced all back to the Etruscans. However, many of the ancient settlements are attributed to the Ligurians from the northern Apennines.

At some point in time, though, the future existence of Lucca seemed uncertain. Nevertheless, the city succeeded in recovering during the 4th and 5th century and regained its position with the restoration of the city walls. 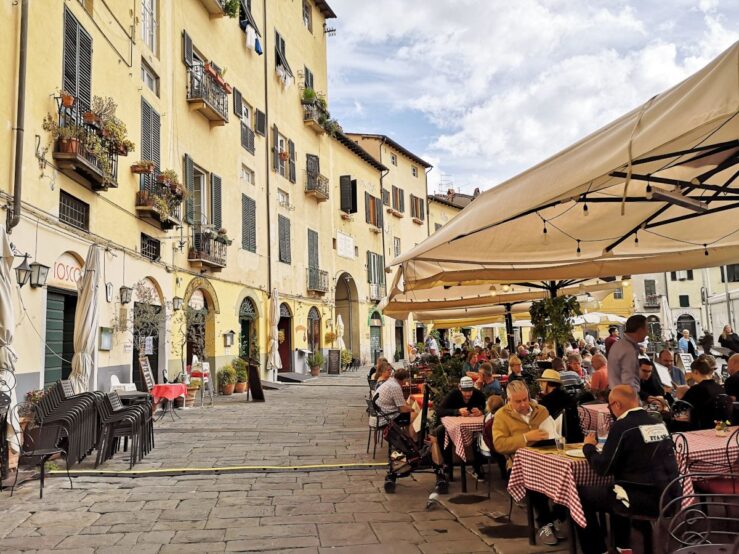 The heart of the city is the still existing oval plaza, the Piazza dell’Anfiteatro, situated in the middle of the intricate pattern of encircling maze-like streets surrounding it.

Already during the 1st century under the Emperor Claudius the Roman amphitheatre, shaped as an ellipse, was initiated. During the centuries to come it had many functions – from the scene of reckless gladiator fights and entertaining spectacles to a location for a powder magazine, a salt store and as a site for the local market – besides being the natural location of local assemblies.

With all this in mind it is quite amazing to walk around exploring the oval square flanked by picturesque facades in varying shades of yellow, orange and cream. The place abounds with small cafés and restaurants serving local specialities and fine Tuscan wine – it is absolutely a gem of a plaza in the old town! 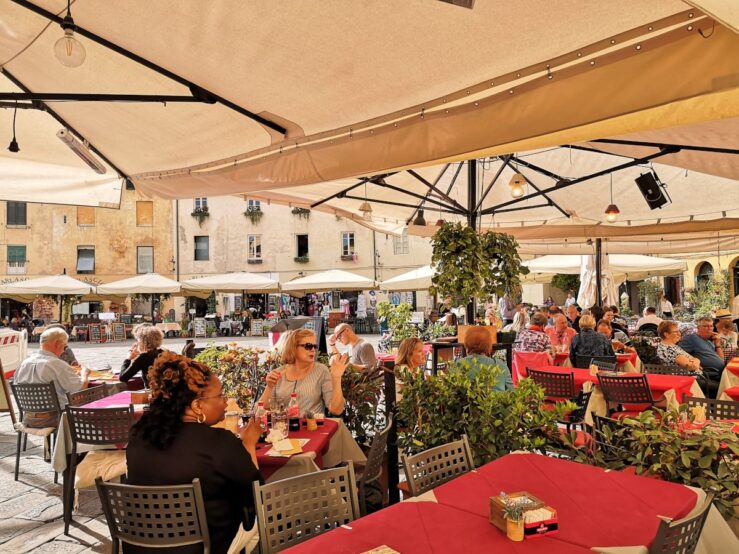 One of the top basilicas in Lucca dating back to Roman times is the San Michele in Foro – at the old Tuscan town market (in foro is the Latin term for ‘in the market’). The current church in both Romanesque and Gothic style was initiated during the 11th century, but the original church was founded even before year 800. The campanile is absolutely magnificent with a façade featuring blind arcades, sculptures and ingenious columns which are notably all different. The summit is adorned with a statue of the Archangel, St. Michael. Moreover, the basilica holds a statue of the Madonna salutis portus. 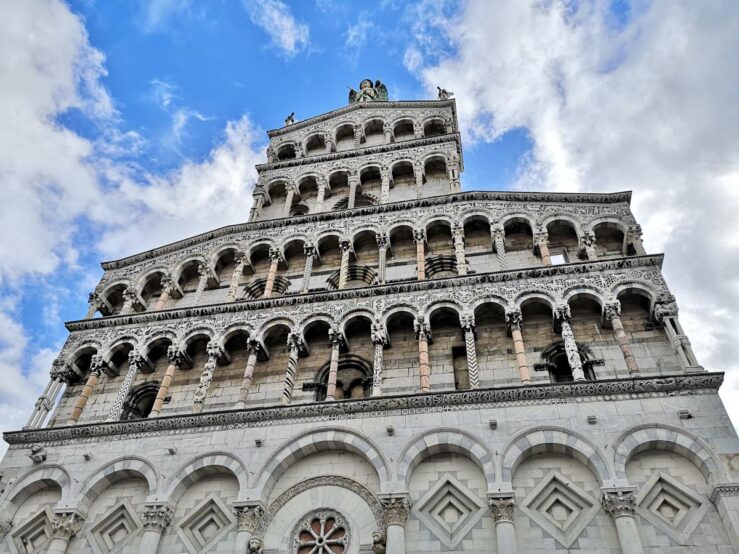 When strolling around in Lucca, you will notice a considerable number of towers scattered across the town. They date together with the adjoining villas back to between the 12th and 16th centuries. Wealthy, influential Tuscan families in town built impressive towers to manifest their importance.

Despite repeated clashes with people of Pisa and other powerful, noble families, Lucca managed to survive both economically and politically.

Throughout the years the city stood under different rules and controls, and alternately became an independent republic and a duchy. In fact Lucca remained an independent republic for nearly 500 years. During the 1400s it developed from an ancient city of medieval towers into an enclosed city, encircled by the same town walls that today still stand. 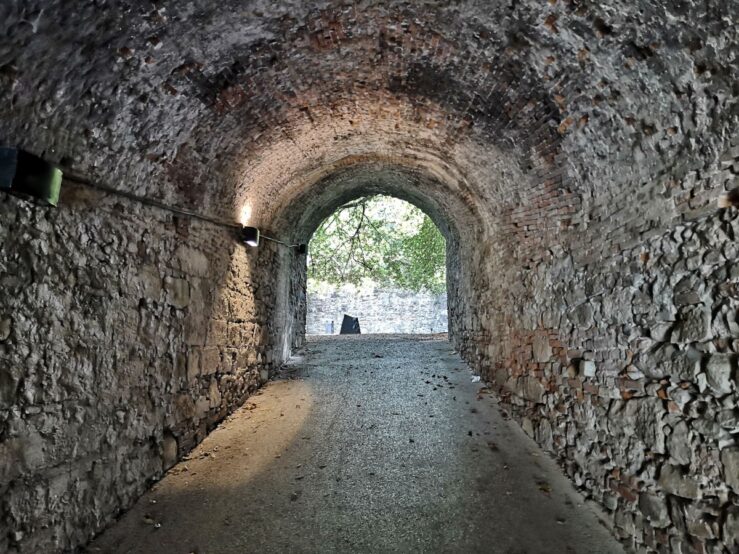 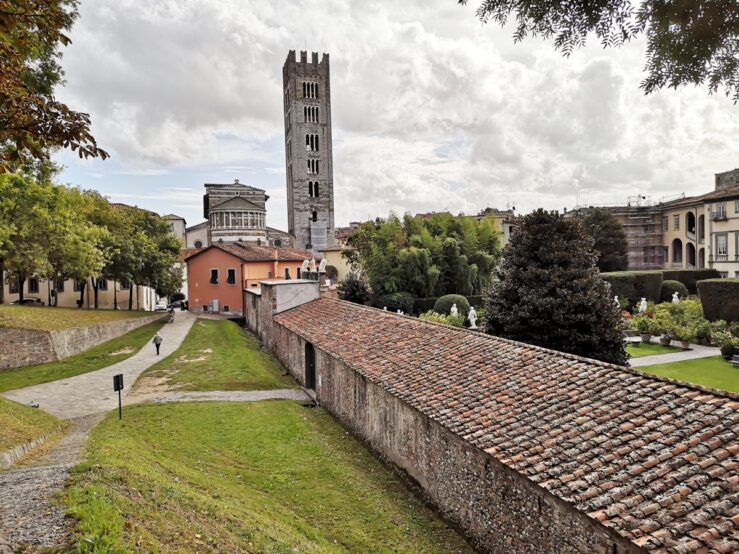 One of the funny things you can do in Lucca is to make the tour of the old town on top of the town walls. Do like the locals and rent a bicycle to do the 4 km (2.5 miles) stretch of walkway all the way round on the rampart encircling the town. Look out above the mazy town rooftops to view the surrounding Tuscan hillsides.

Also during the more recent centuries Lucca has been a historical focal point. In 1799 Napoleon’s troops invaded the Tuscan town, and it got status of a Principality. Later, in 1815 Lucca came under the control of Maria Luisa of Bourbon for some years. Her son, Charles of Bourbon, eventually handed the control of Lucca over to the grand duchy of Tuscany in1847 which meant the end of the city’s independence. With the unification of Italy in 1861, Lucca finally became part of the unified country Italy. 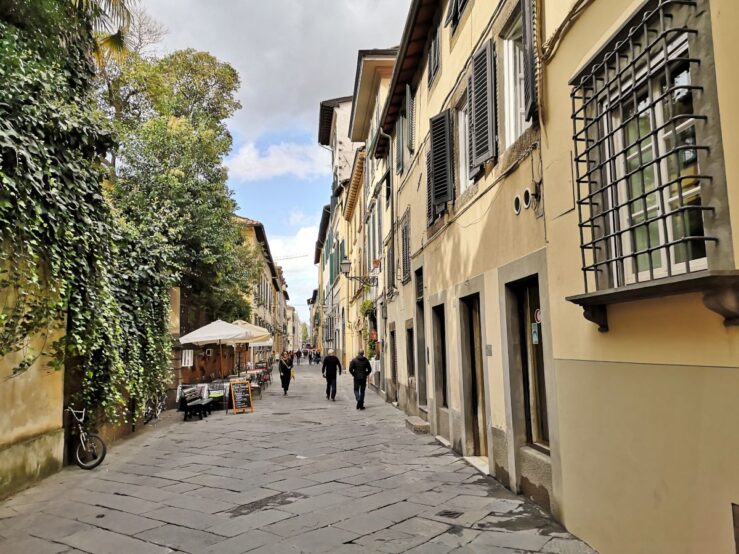 The rich history is reflected in the number of historical structures spanning the old town. Lucca is also known as the city of a hundred churches – referring to the huge amount of churches dispersed in the streets. Nearly every street corner features interesting buildings of which many are religious constructions. Among the masterpieces are the Duomo – the San Martino Cathedral and the San Michele in Foro.

The Duomo, the Cathedral in Pisan style, is a true jewel. It is from the 11th century with a major 14th century Renaissance redesign. A splendid bell tower and a lavish marble façade of red, green and white marble adorn the Cathedral. All columns on the façade are created in each their different style due to being contributions in a design competition. The Cathedral also holds the famous small shrine containing the Holy Face of Lucca or Volto Santo di Lucca in Italian. 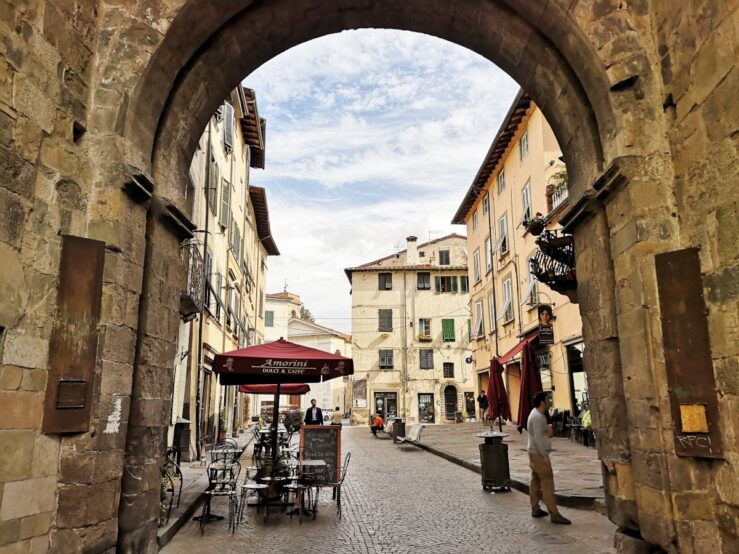 Experiencing Lucca in this setting of unique architecture covering both the traces of the ancient Roman amphitheatre in the Piazza dell’Anfiteatro, the glorious churches, as well as the quaint towers of more recent date, you will definitely lose your heart to the Tuscan picturesque town. Sit down in one of the numerous cafés or restaurants and try an Italian espresso, the flavour of a glass of Chianti or an authentic Tuscan meal – and sense the ambiance of historic Lucca.

Enjoy Lucca – a real gem in Tuscany! Combine it with a trip to Florence or Siena.

Lucca: Albergo San Martino is ideally located within the town walls of the historic centre near the Cathedral. The hotel offers a superb breakfast.

Florence: Hotel Mia Cara is located 200 m from Firenze Santa Maria Novella Station and a 10-minute walk from the historic centre and 1 km from the Ponte Vecchio bridge and Piazza della Signoria square. The hotel features a wellness centre and a small garden.

Florence: Hotel Bellavista is located a 2-minute walk from Firenze Santa Maria Novella Train Station, and less than 10 minutes on foot from the Cathedral. The hotel offers a buffet breakfast.

Read more about day trips in Tuscany: 5 Awesome Day Trips from Florence and check also Best Things to Do in Florence in 3 Days 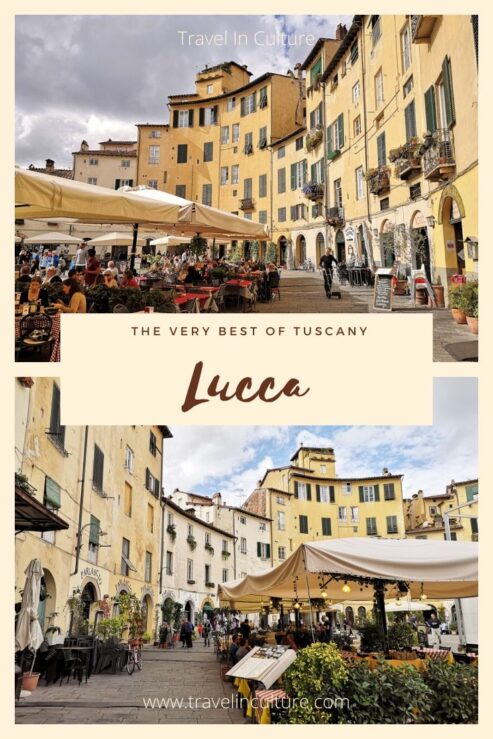 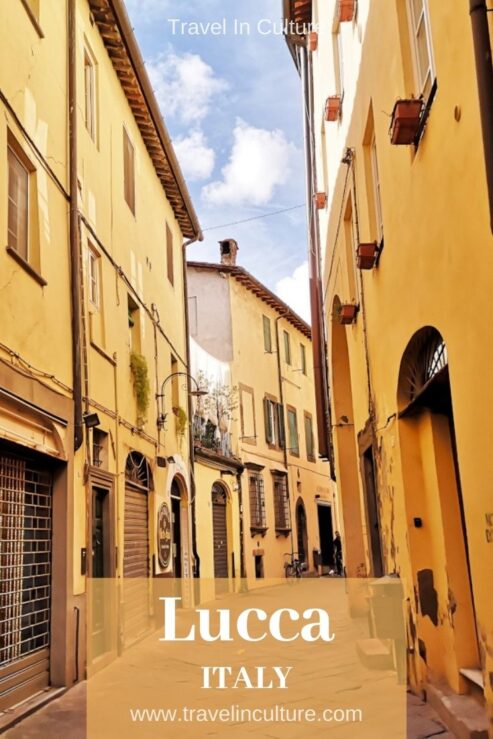 Featured image of
Take in Lucca – A Top Tuscan Town:
Travel In Culture