↓
ITALY  The walled medieval village in Italy, San Gimignano, is famous for its towers, which can be viewed from afar, that rise in the Tuscan landscape. The village was an Etruscan settlement 500 years BC, but there are today no traces of its Etruscan roots. It is the contours of the ancient towers on the sky that now attract visitors to the small hillside village.
Ainnelise Niyvold Liundbye
This page has affiliate links (if you purchase through our links, we get a small commission at no extra cost to you - thank you!), see our Privacy Policy & Disclaimer.

First historical evidence of a place named ‘prope Sancto Geminiano adiacente’ (meaning: next to San Gimignano) was in year 929. This fertile hillside location of the Val d’Elsa was donated to the bishop of Volterra. At that time it was one of the villages used as a stopping site along the Via Francigena, the pilgrim route. Moreover, San Gimignano was also located near the ancient Roman road of Via Romea in Italy.

View on map
Travel Tips
Advertisement
Where to stay in San Gimignano / Siena? Palazzo Mari (San Gimignano) with Tuscan style rooms in the heart of San Gimignano, Hotel Duomo (Siena) with a rooftop terrace in the historical centre of Siena. 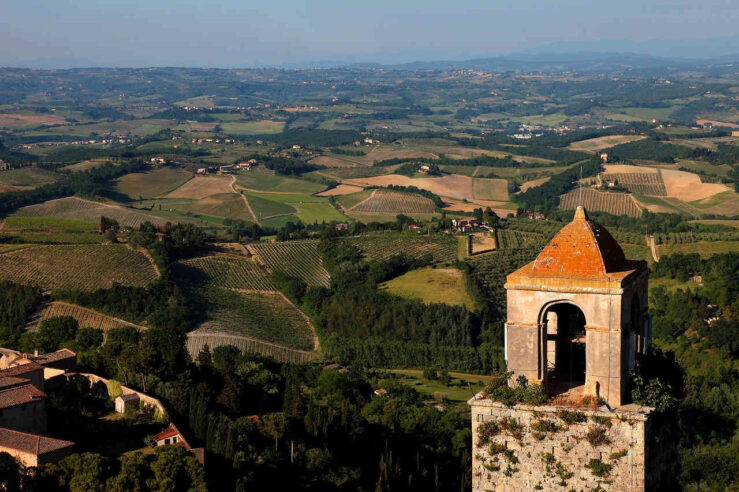 Due to its favourable location for the pilgrims travelling to Rome, San Gimignano developed in the Middle Ages into an important town. A small agricultural community arose with the production of wine, saffron and wool. At its peak around the first half of the 14th century San Gimignano had about 13,000 inhabitants and was now enclosed by a massive town wall. 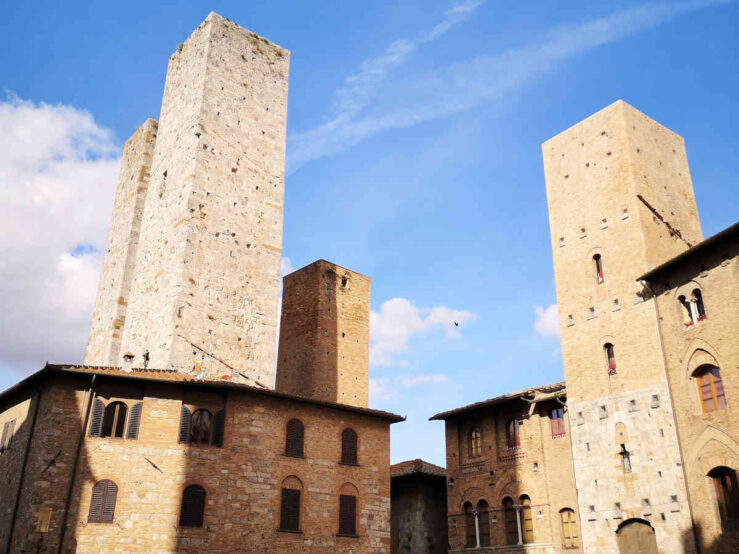 The remarkable towers in the village 334 m (1,100 ft) above sea level were built by wealthy patrician families in the 12th and 13th centuries. The number of towers rose to 72 in San Gimignano’s heyday and they symbolised wealth and power of the proprietors. Every family, who could afford it, built a tower to show its status in society as well as economical power. Often it was rich families like merchants and moneylenders who could spend the amount required to raise such a tower.

Where to stay in San Gimignano and Siena, Italy
Advertisement
San Gimignano: Leon Bianco is located in the heart of San Gimignano in Piazza della Cisterna – an excellent location in the ancient town with great views.

San Gimignano: Palazzo Mari offers accommodation in the city centre of San Gimignano. Located only 300 m from the Cathedral / 50 m from the Church of San Agostino. The apartment has a kitchenette, and rooms are in a typical Tuscan style.

Siena: Hotel Duomo is located in the historical centre of Siena, near the Cathedral and the Piazza del Campo. Spectacular views of the surrounding hills. The hotel features a terrace above the roofs.

The medieval towers housed the family in small rooms with few openings and sufficiently thick walls both to keep the heat out in summer and to insulate in winter. The ground floor was often used for workshops. 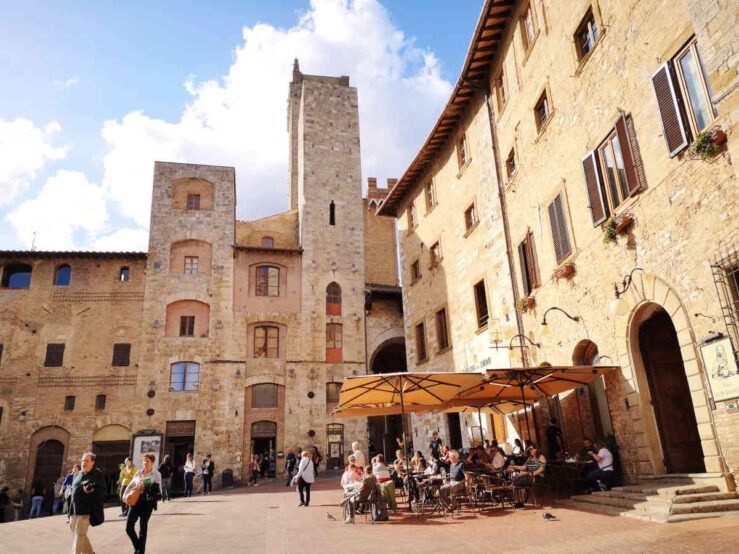 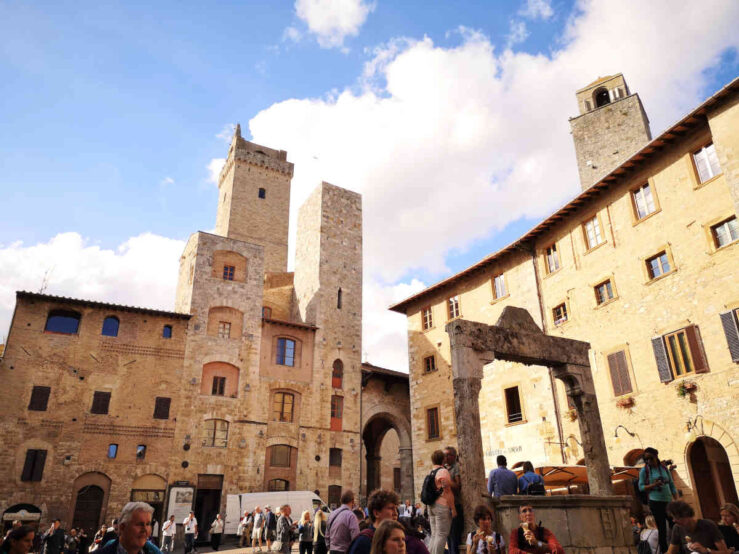 From the end of the 12th century the towers changed a bit character. Bricks were introduced, bigger spaces and wider openings saw the light of day, and buildings of lower height began to flank the towers. The architectural style from Pisa and other Tuscan towns now also began to influence the style.

When the Black Death arrived in 1348, it was the start of San Gimignano’s downturn. The village saw a decline in the number of pilgrims and other visitors coming, and this weakened the small community. Eventually, Florence took over the control of San Gimignano. 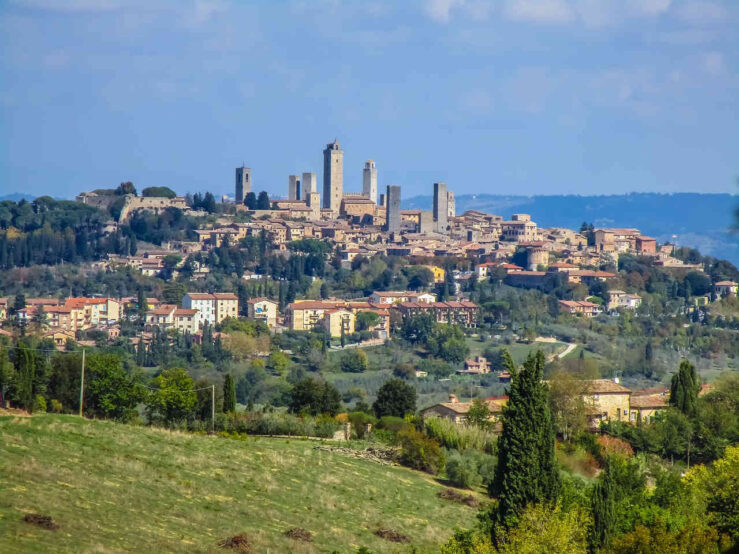 Today, only 14 towers have survived. Some of these are the Torre Grossa, the Chigi Tower, the Pettini Tower and the Salvucci Tower, just to mention a few. Nevertheless, there are still remains of the foundations of several others in San Gimignano.

San Gimignano became a UNESCO World Heritage Site in 1990. The still existing towers stand today on a Tuscan hilltop as maybe the most peculiar ancient skyline the world knows of!

Read more about day trips in Tuscany: 5 Cream-of-the-Crop Day Trips from Florence and take a look at Cool Things to Do in Florence in 3 Days!

Going to Rome? Check out Rome in 3 Days

Read next: The Thermal Hotspot Montecatini and Visit Pompeii Ruins 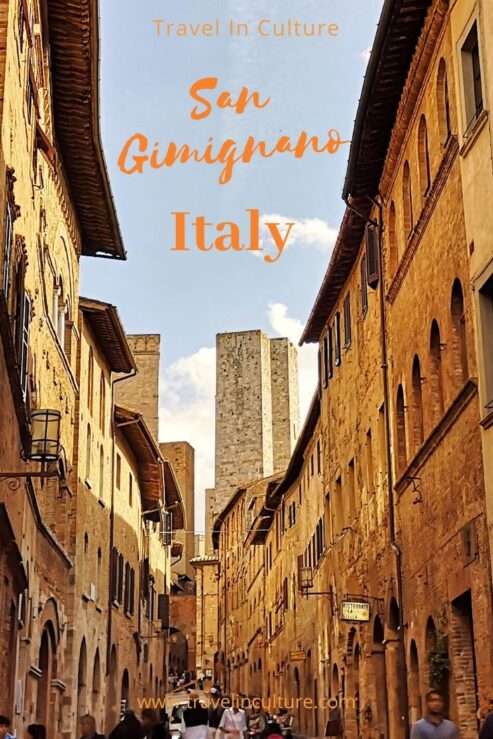 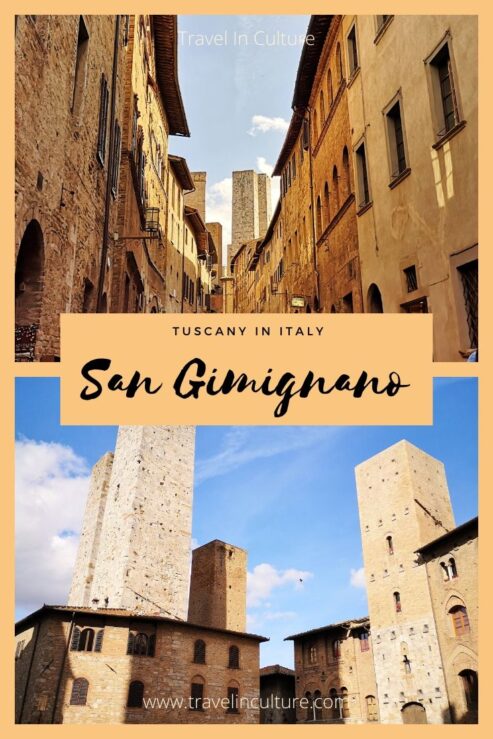