↓
ITALY  The historic centre of Siena is a world-class site that has been declared UNESCO World Heritage. In particular, Siena is known for its shell-shaped plaza, Piazza del Campo, which is the site of the biannual Palio di Siena, a horse race that is held twice each year in Siena, on 2 July and 16 August.
Ainnelise Niyvold Liundbye
This page has affiliate links (if you purchase through our links, we get a small commission at no extra cost to you - thank you!), see our Privacy Policy & Disclaimer.

The world-famous horse race takes places just off the the communal palace, Palazzo Pubblico, with its tall tower Torre del Mangia. It was constructed not only as one of the tallest secular towers (102 m / 335 ft) in medieval Italy, but also having the same height as Siena Cathedral. This was meant as a sign that the church and the state were equally powerful. 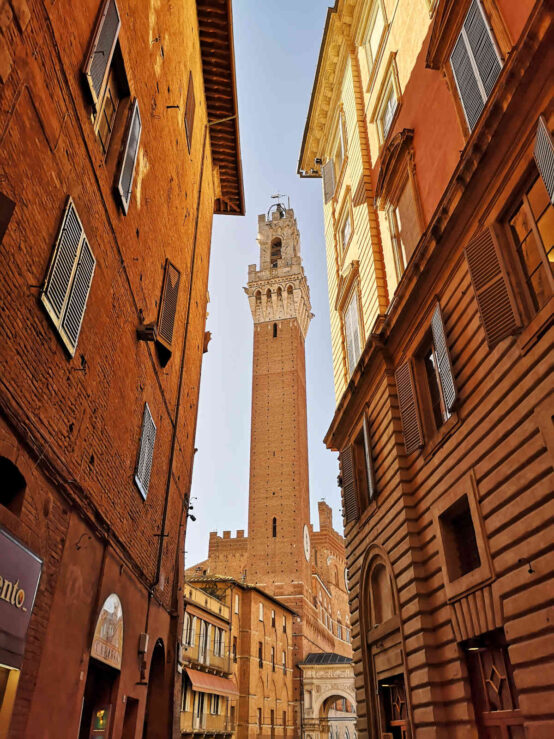 Ten horses and jockeys riding bareback represent ten of Siena’s seventeen city wards. The race showcases the rivalry still remaining between the wards. To prepare for the event the Piazza del Campo is before the race filled with a layer of earth. On the very day jockeys and horses then compete doing 3 laps of the plaza. The race is short – often less than 90 seconds – and often not without drama. During the whirling and hazardous ride the horses sometimes end up throwing off their riders. Nevertheless, the winner is the horse crossing the line first – with or without a mounted rider. 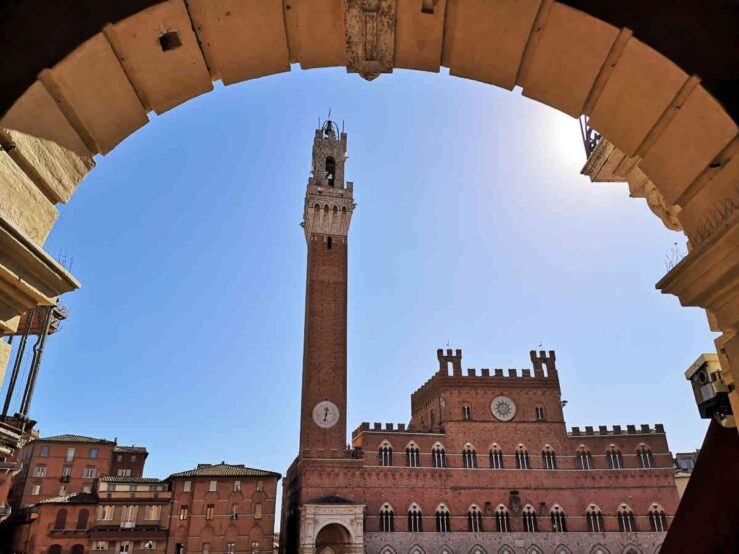 The origin of the Palio race goes back to medieval times. Preceding the current horseback races, it was in olden times bullfights and donkey races that took place on the plaza. 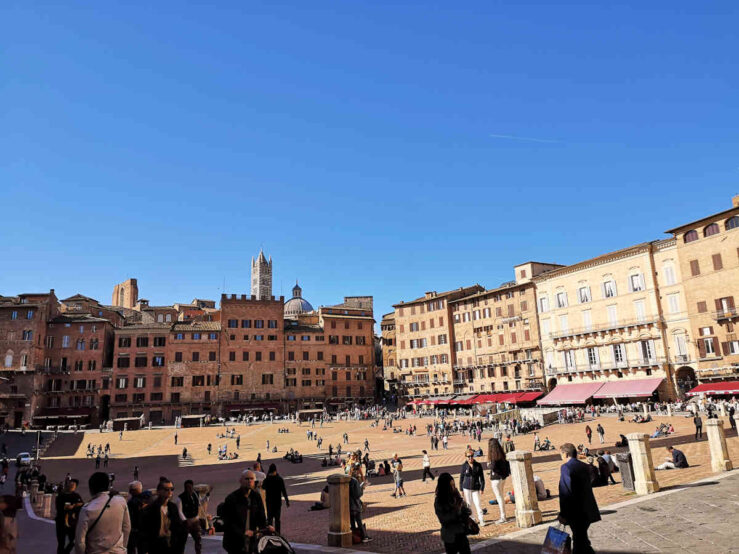 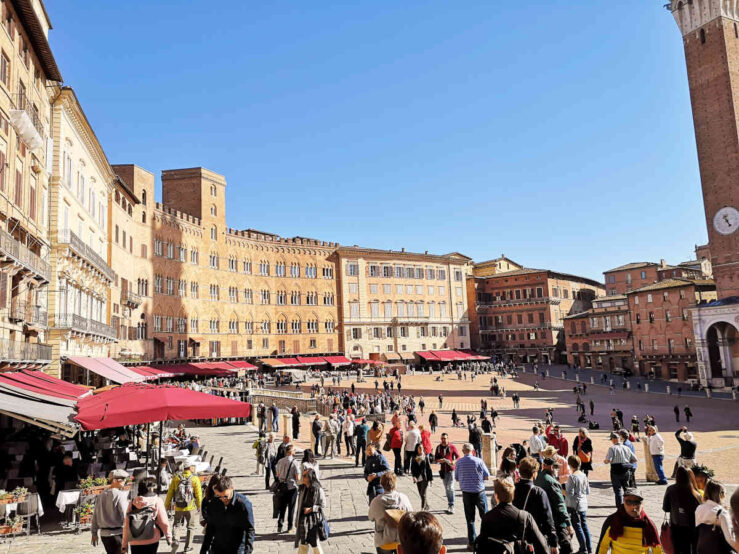 The vaguely sloping Piazza del Campo is regarded as one of the most beautiful squares in all Italy due to its architecture, its specific shell-shaped form, the adjacent, stunning Palazzo Pubblico and the fine bell tower. Moreover, the paving on the square is divided into nine segments to represent the Governo dei Nove, the rule of The Nine who laid out the campo and governed Siena in its medieval heyday. The Palazzo Pubblico is still today home to the city’s local government. As a focal point, 11 narrow streets radiate into the old city of Siena from the plaza. 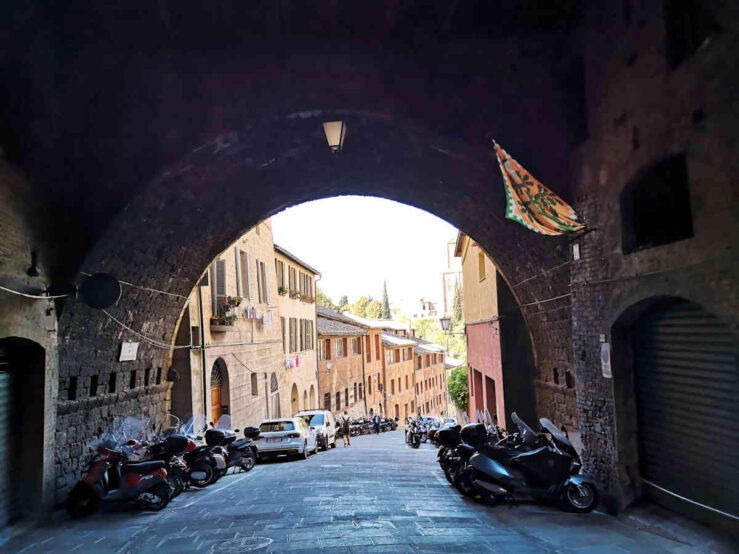 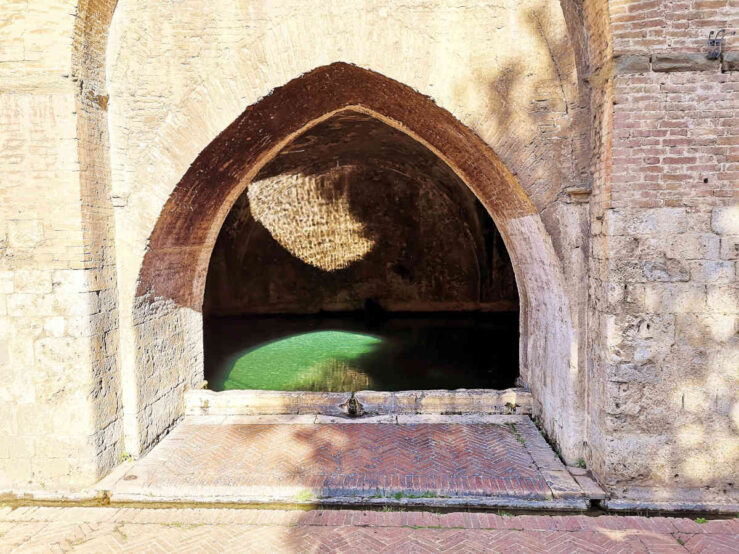 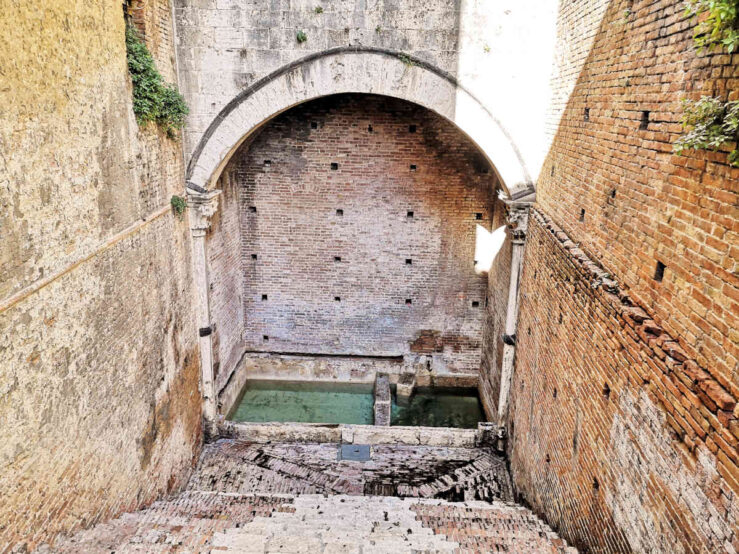 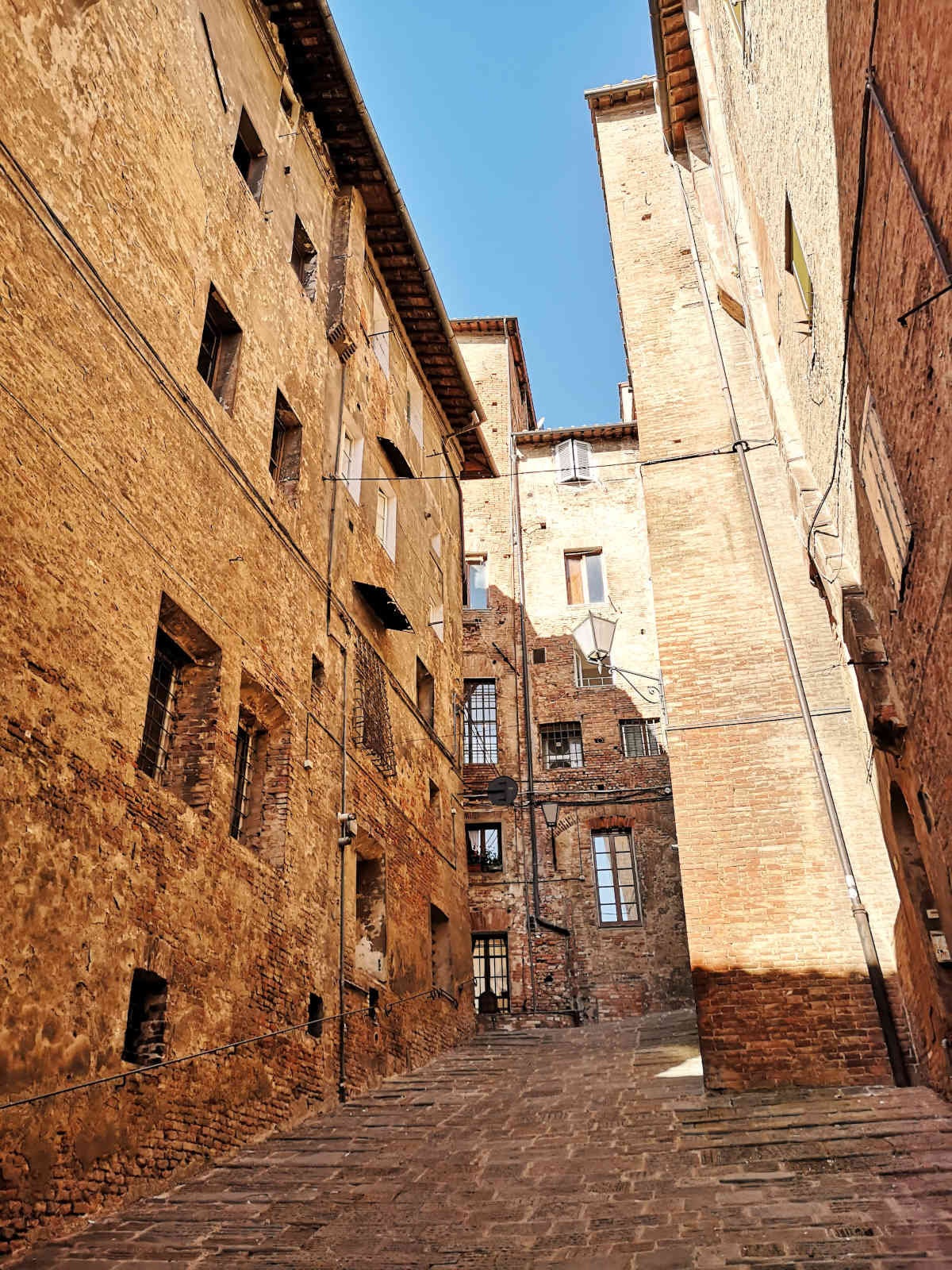 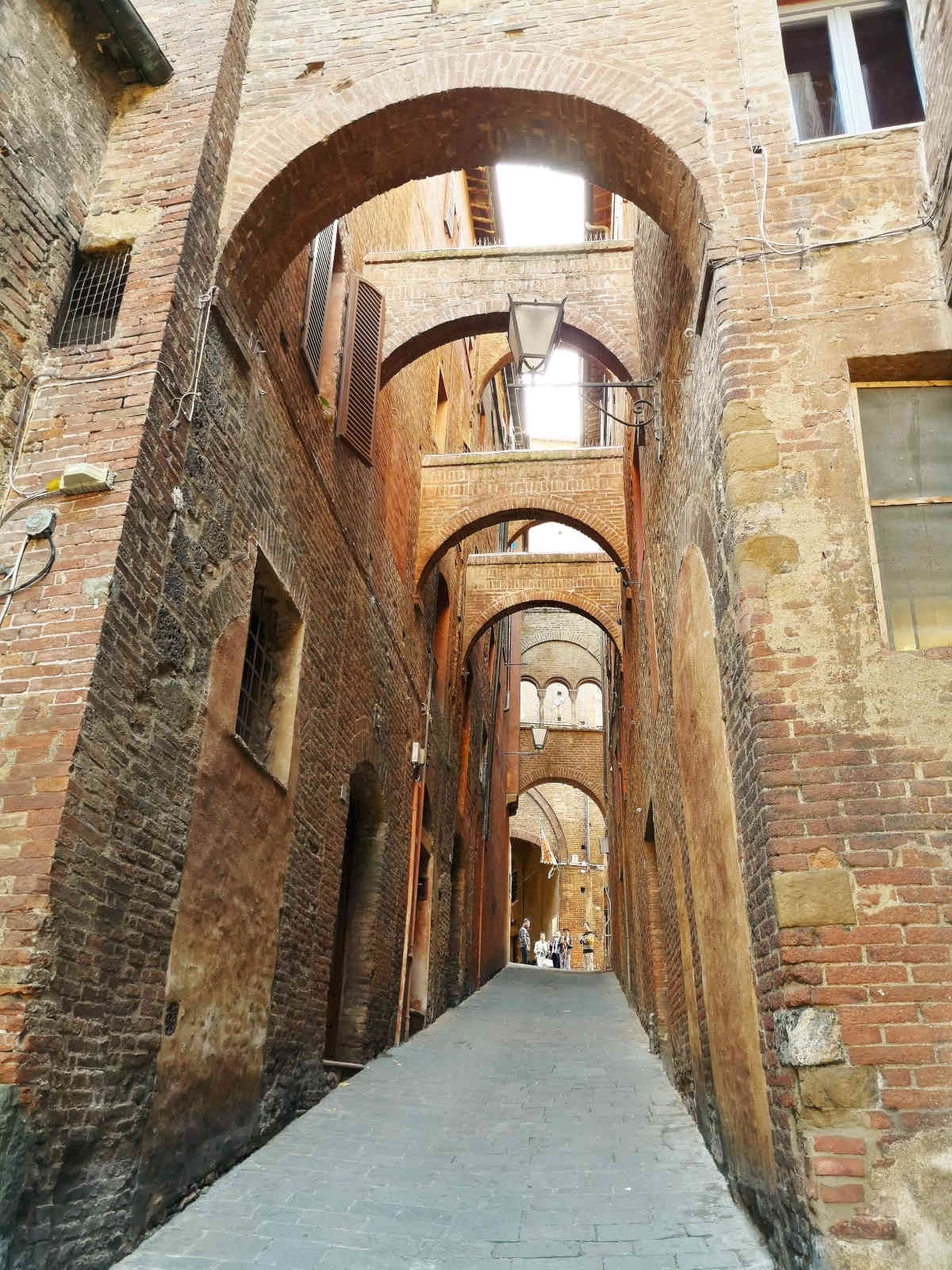 Il Duomo, Siena Cathedral from the 12th century, is a masterpiece of Romanessque-Gothic architecture. The massive dome rises from a hexagonal base. The Cathedral has both a dome and a bell tower constructed of white and greenish-black marble in stripes (and with the addition of red marble on the cathedral façade). 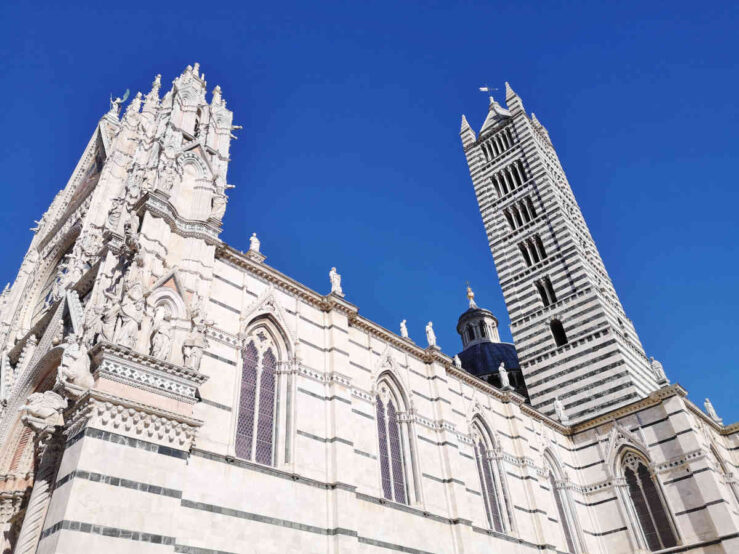 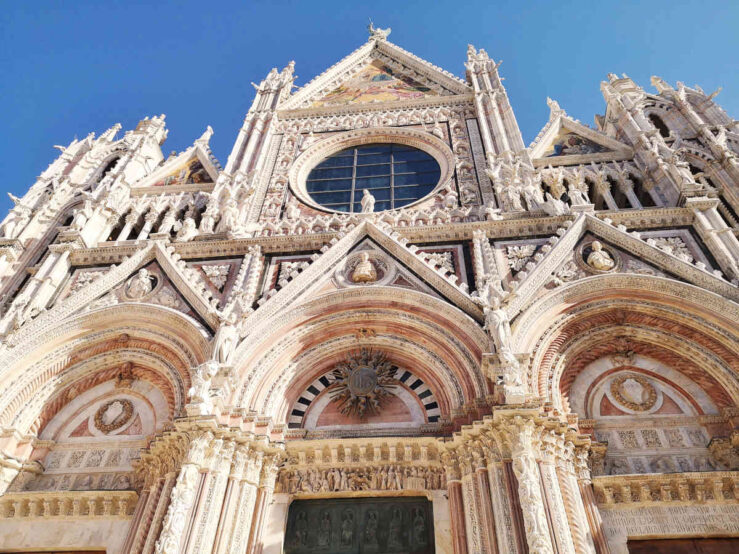 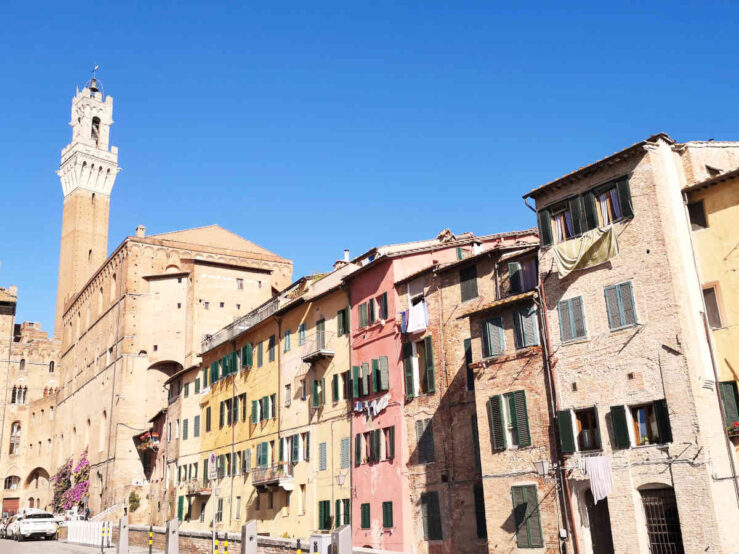 Originally, Siena Cathedral was projected as the largest basilica both in Italy and in the world, but due to the lack of funding, the construction shrank. Nevertheless, it is still absolutely impressive and offers great views of the city when you climb the stairs. Moreover, the Cathedral features an octagonal pulpit with lion pedestals from the 13th century. 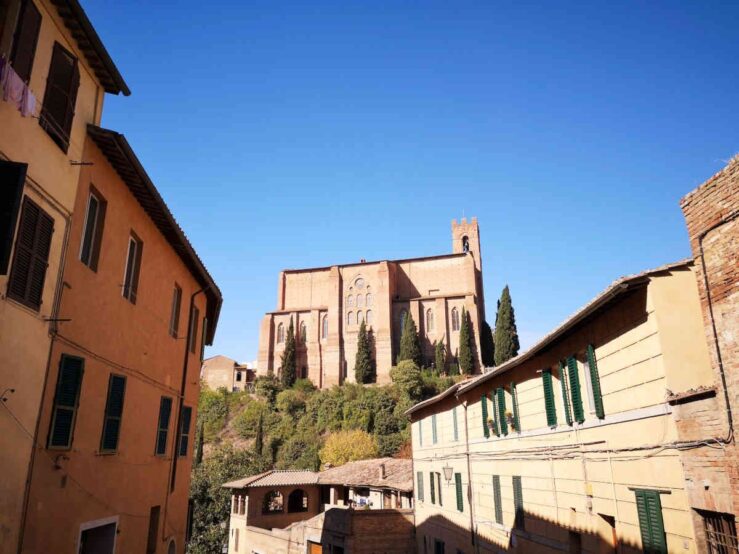 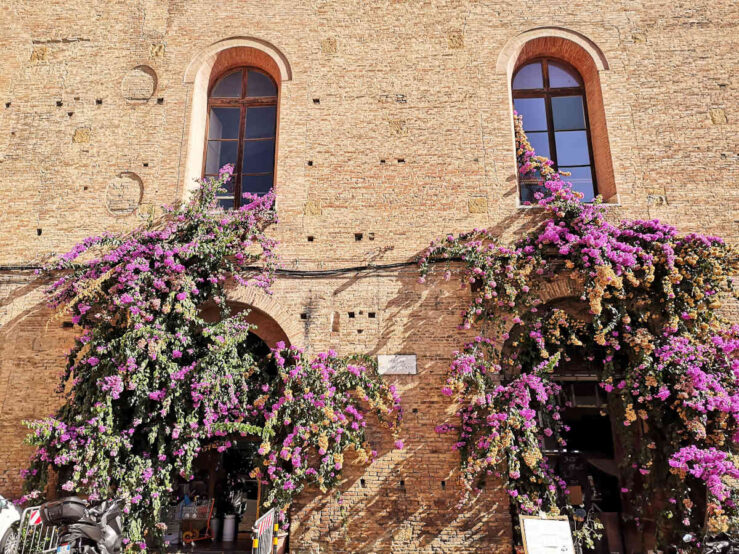 When you stroll around in Siena, the colours are in general vivid and warm, pastel and cream with shade of brown, orange and yellow. 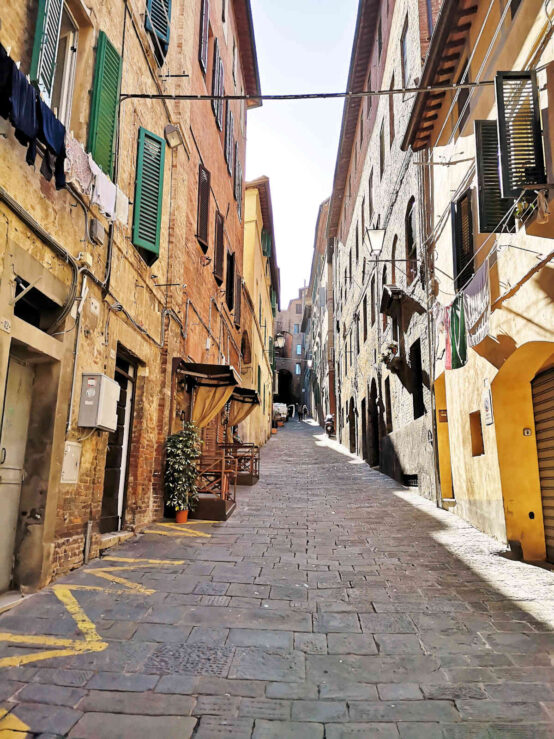 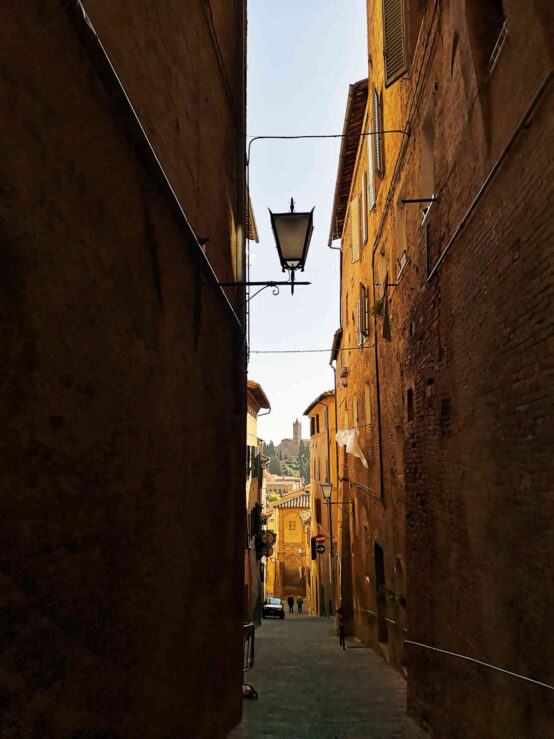 Siena is renowned for its narrow streets flanked by impressive brick buildings of medieval character. People used to live in – and across the narrow streets. Today all the original structures unarguably contribute to the charm of Siena! 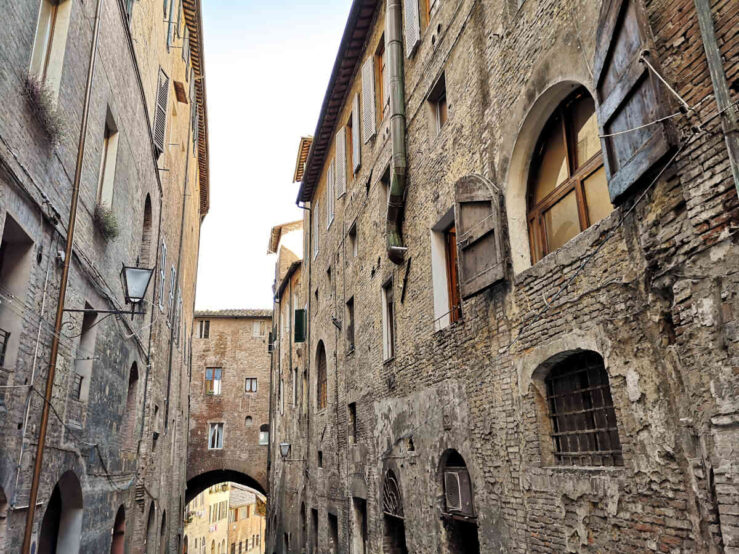 The ambiance will take you back to a bygone era when the Sienese used the Piazza del Campo as an active market place and for gatherings like important political events and other celebrations.

What is Siena Italy known for in particular? Definitely its medieval cityscape, which makes Siena one of the most picturesque, authentic cities in Italy – and even in the world – that you could visit. The city receives several hundred visitors every year!

Read more about day trips in Tuscany: 3 Tuscan Towns in a Day and 5 Awesome Day Trips from Florence

Read next: Montecatini in Italy and Lucca – A Gem of a Tuscan Town 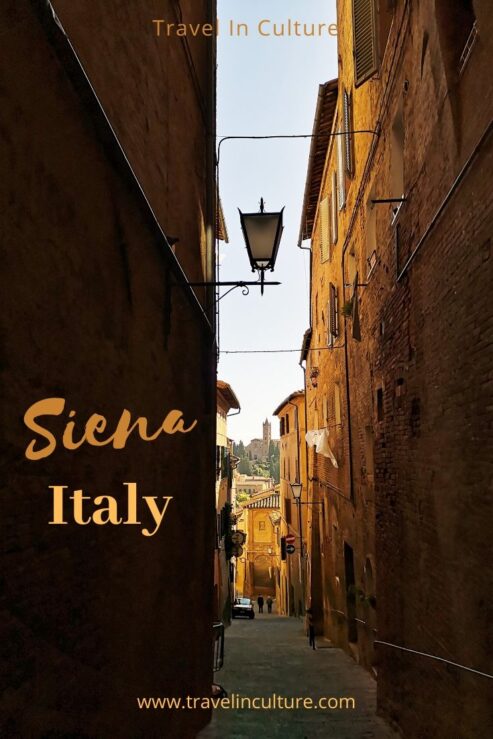 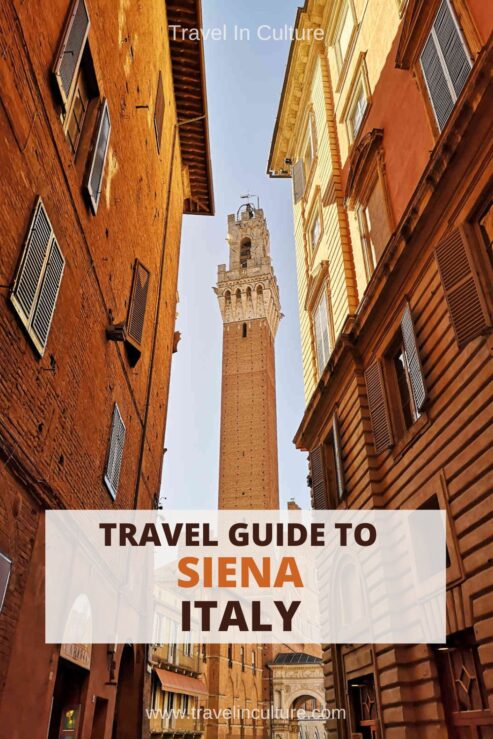