↓
PERU  On our trip Cusco – Lake Titicaca – Copacabana – La Paz we miraculously end high up in the mountains in Andes Peru among furry alpacas and llamas – due to unforeseen events. Peru features herds of llamas and alpacas at this altitude and the sight is absolutely breathtaking.
Ainnelise Niyvold Liundbye
This page has affiliate links (if you purchase through our links, we get a small commission at no extra cost to you - thank you!), see our Privacy Policy & Disclaimer.

We have beforehand booked seats on the buses between Puno and La Paz. After a stunning visit to the floating islands on Lake Titicaca we are now ready to continue by bus to the border town, Copacabana.

Once back on the bus, we get the shocking news that a strike has blocked the usual road to Copacabana in Bolivia and therefore we will not be able to continue as planned.

Inspiration for your Peru trip: Cusco Travel Guide and The Sacred Valley and See the Mythic Inca Culture at Machu Picchu

Apparently the Peruvian government is heavily engaged in corruption, and there is a good deal of strikes going on these months. According to our guide in the Sacred Valley some days ago, more or less all of the four last presidents in Peru have been deeply involved in corruption scandals and are either in jail or on their way to jail! 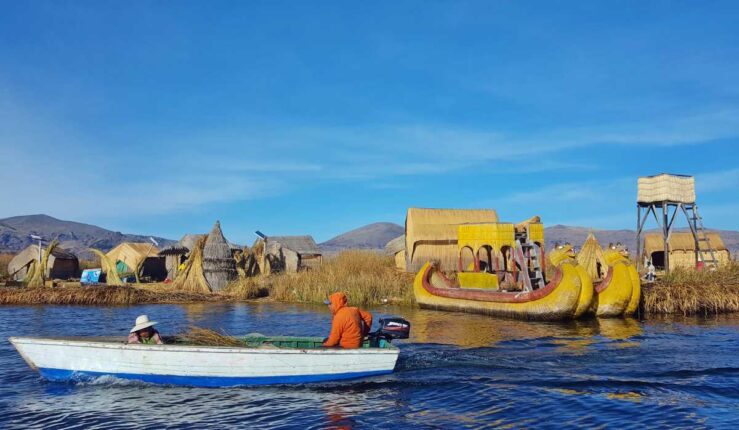 We have read about a mining strike, a teachers’ strike, a transportation strike as well as clashes with armed groups beyond the anti-government protest. As a consequence protests and strikes follow in the entire country. Seemingly, we are now affected too!

The bus assistant now informs us that our bus company, Bolivia Hop, as one of the only bus companies from Cusco, has decided to do their utmost to get all passengers through to their final destinations in Bolivia. This means that they have decided to make a detour of 4 hours up through the Peruvian Andes Mountains in order to reach the Bolivian border from that side. We feel lucky since we are told that yesterday all buses without exception had to go all the way back to Puno or even to Cusco due to the blockade! 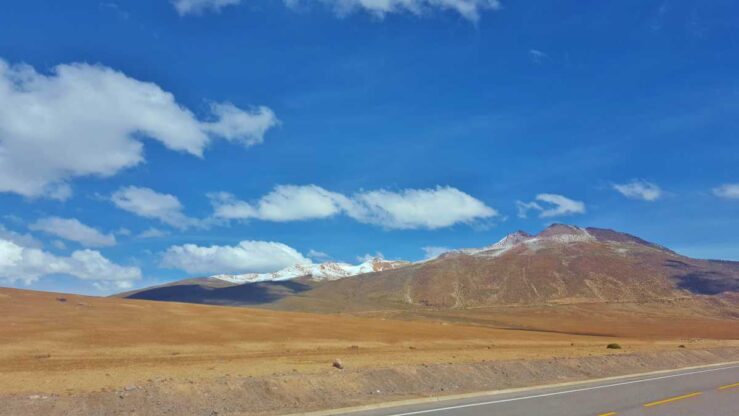 Deep inside the Andes Peru

Surprisingly enough, the detour turns out to be one of our most outstanding experiences in Peru. The Andes Mountains are awe-inspiring. We are taken to heights and nature we could only have dreamt of. The bus is passing through local villages and tiny communities of indigenous Andean people doing everyday chores as selling and buying from each other on the small outdoor market.

On our further journey we reach a farm where we can hardly believe our eyes. All of a sudden in the middle of yellowish and brownish scenery a tall and proportional snowman appears. Not the faintest sign of snow as far as the eye can see. There must obviously have been snowy days here recently. At this altitude the sun is powerful, though, and a day or two with piercing sun rays may well have melted a fresh layer of snow. Puzzled we continue on the mountain road and after a while snow little by little steadily gets to cover the naked surfaces without vegetation. 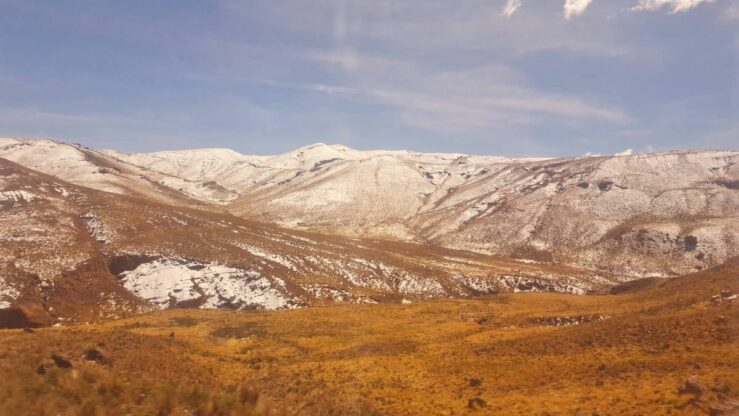 We are driving through an impressive scenery in the Andes, Peru | Photo: Travel In Culture

It is not many vehicles we encounter. If you are not an Andean resident, there is no obvious reason why you should make a winding ride in the thin air where the landscape at times gives associations to a remote infertile planet without civilisation. When we are close to the highest point on the route, the bus makes a stop and everybody rushes out to take photos of the fabulous views. We all have the impression that our sheer transportation from Puno to Copacabana has turned into a sightseeing tour with the bus assistant being our tour guide! 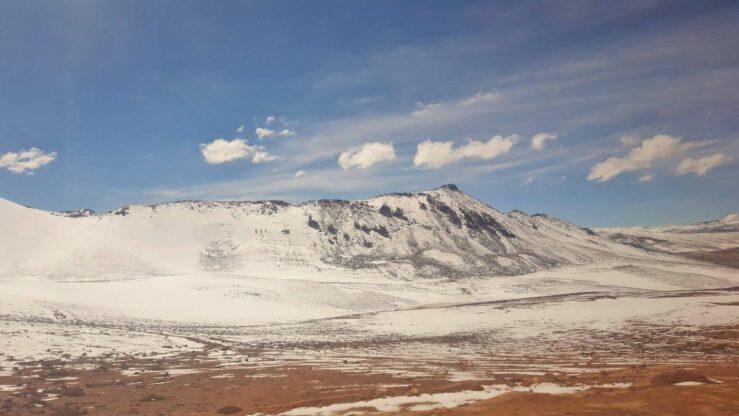 The plains and mountains are partly snow-covered when we reach the top | Photo: Travel In Culture

Awesome herds of llamas and alpacas

On the plains we now and then catch a glimpse of a herd of llamas or alpacas calmly grazing, undisturbed. They drink from the lakes of melted snow where such water reservoirs can be found.

The alpacas in Peru are true herd animals whereas the llamas can be spotted more individually and in some contexts they are even used as guard animals for alpacas and sheep. Both llamas and alpacas belong together with vicuñas and guanacos to the camelidae family in the Andes Mountains – like the camels in Asia and Africa. They are all herbivores and found in the grasslands and on the plains – but each of the species inhabit zones at specific altitudes. Distinguishing between llamas and alpacas is not that hard since llamas are taller and have banana-shaped and longer ears than alpacas. 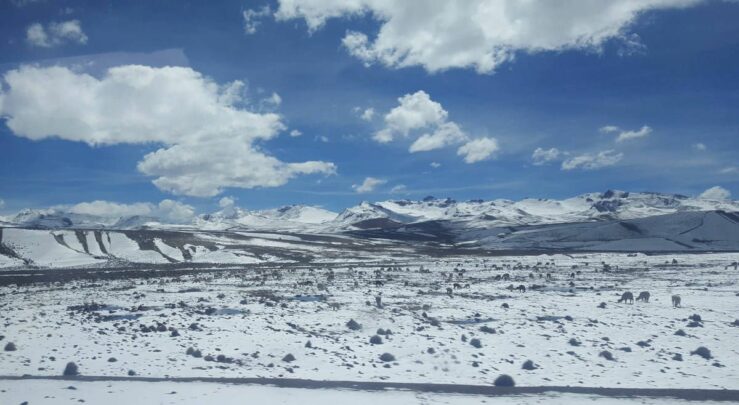 On the plains in Peru llamas and alpacas dot the landscape | Photo: Travel In Culture

During the next hours through Andes Peru we spot thousands of llamas and alpacas searching for food in the sparse vegetation which is even partly snow-covered. Later on we see on a contour-lined map that we have actually reached an elevation of nearly 4,800 metres (15,700 feet) – far beyond the limit we would ever have dared on our own by fear of altitude sickness. However, none of us are apparently the slightest affected by the thin air.

Fortunately, it doesn’t either seem that anyone else on the bus is seriously troubled. Maybe we are all awfully lucky. Sometimes people do get in a critical condition when being at this altitude. There is definitely a reason why many hotels in the Peruvian Andes Mountains have oxygen readily available for their guests. Problems due to low concentrations of oxygen can turn serious at very short notice. 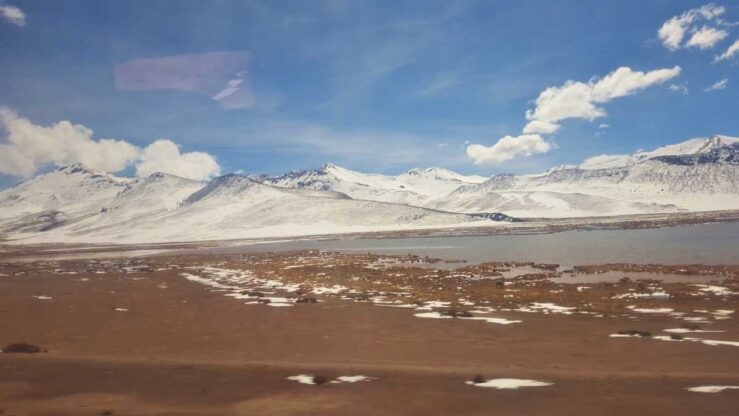 During our bus trip through the Andes our focus is of course on the panoramic sceneries in this part of Peru, the surprising snow, the Andean villages and the herds of llamas and alpacas crossing our sight.

We are thrilled to bits that we in this way by a complete coincidence get to see the grandeur of the Andes Mountains and come across fascinating Andean wildlife! 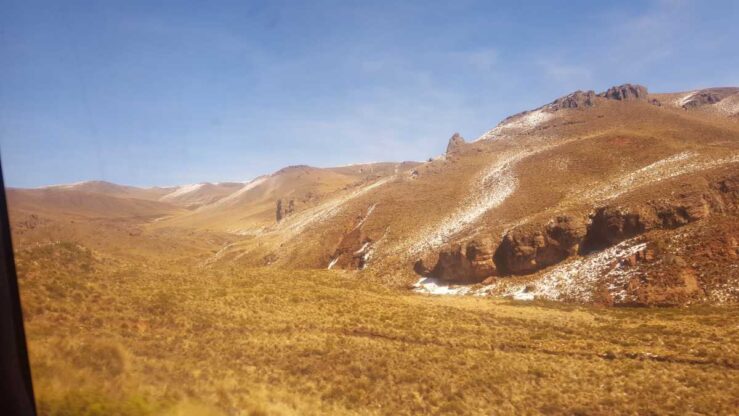 Read next: Things to Do in Peru – Where to Travel – Itinerary 8 Days