↓
SPAIN  The streets abound with exhausted pilgrims who have reached their long-awaited goal in Santiago de Compostela. Whether you have followed the Camino Francés, the Camino Portugués or the Camino Inglés, all pilgrim routes merge here for the last stretch of road leading to Santiago de Compostela Cathedral.
Ainnelise Niyvold Liundbye
This page has affiliate links (if you purchase through our links, we get a small commission at no extra cost to you - thank you!), see our Privacy Policy & Disclaimer.

We have cheated a bit since we haven’t walked the entire pilgrim route. We have set out for only a part of the Portuguese camino which ends at Santiago de Compostela Cathedral. Following the yellow arrows, we have visited the church Igreja de Santa Marinha de Arcozelo, where we happened to witness a traditional baptism. We have walked along cobblestone paths flanked by vines and stone walls, passed agricultural fields, come across a small fish farm, enticing orchards and lush vineyards in the Labruja Valley. Now and then a rippling waterfall has caught our attention among pines and eucalyptuses. 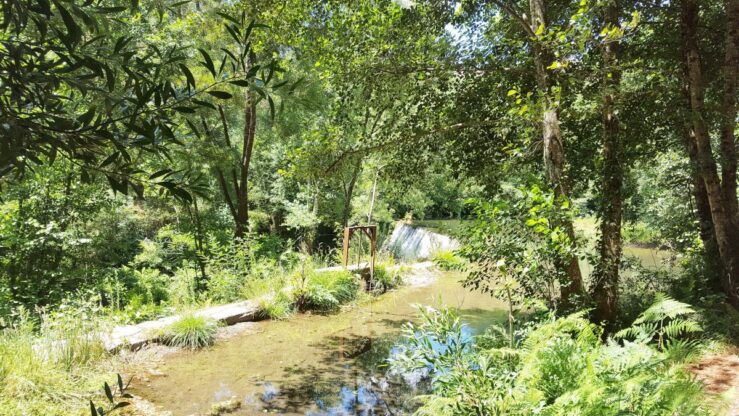 Lush forest with a small waterfall | Photo: Travel In Culture

I say hello to the smiling woman energetically digging up potatoes a few metres from the trail. Otherwise, the only contact along the route has been the occasional ’hola’ to the pilgrims with walking sticks and wide-brimmed sunhats, we sporadically have met in the opposite direction – probably on their way to the Fatima shrine.

Where to stay in Santiago de Compostela? Hospedería San Martín Pinario in a converted monastery near the Cathedral, Albergue Seminario Menor in a former monastery with great views.

Inspiration for Spain trip: Madrid in 3 days and Gaudí in Barcelona and Barcelona in 5 days

It really intrigues me that people for hundreds of years have walked this same Jacobean itinerary to reach Santiago de Compostela Cathedral. The Camino Francés from St. Jean-Pied-du-Port (769 km or 478 miles) is by far the most popular one, but, regardless of camino, the goal is the same for everyone: to arrive in Santiago de Compostela to participate in the cathedral mass. 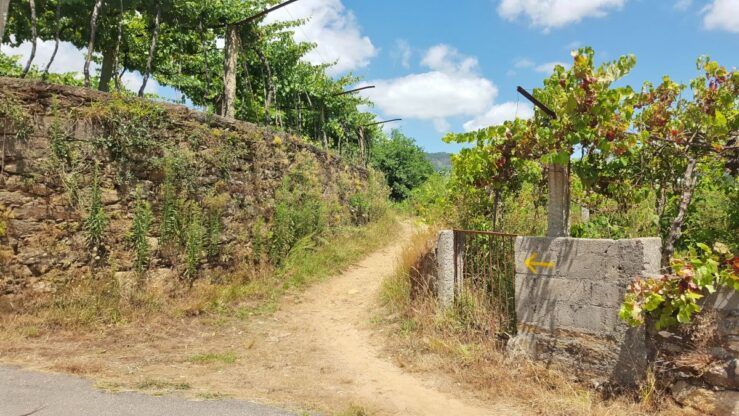 Yellow arrows show the way along the Camino Portugués | Photo: Travel In Culture

The history goes back to the apostle James (Saint James is also Santiago) who went to the north-westernmost corner of Spain to convert people to Christianity. It was by the Romans named Finis Terrae – denoting the ‘end of the world’. Back home, he was later tortured to death by Herodes Agrippa and denied burial in Palestine. His disciples brought him back to Galicia in Spain by boat and buried him in a secret place in the Roman province’s capital, Iria Flavia.

Not until 813, when a hermit observed a sudden flash, were the memories of his existence brought back to the people. The place was called the ‘field of the star’ or Campus Stellae in Latin. Subsequently, it was turned into Compostela. This led to the rediscovery of James’ tomb. King Alphonse II then declared Saint James a patron. According to the sources, Saint James performed many miracles, and pilgrims little by little began to follow the way to Santiago de Compostela. 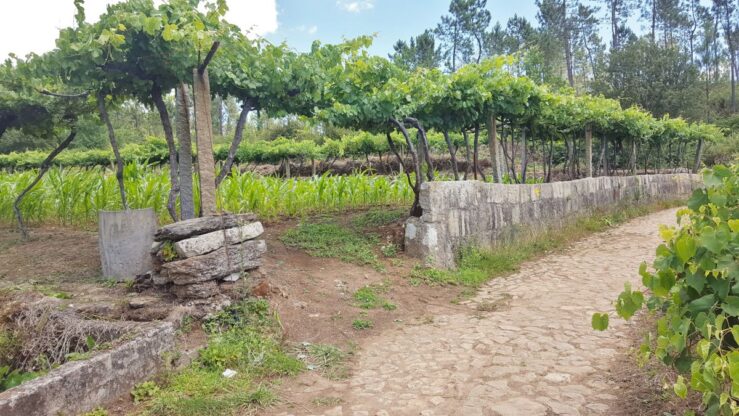 We come across vineyards and farmland along the trail | Photo: Travel In Culture

The pilgrims flock to the remote Spanish town Santiago de Compostela – either by foot, by horseback or by bicycle.

All means of transport count when you make the pilgrimage to the north-western part of the Iberian Peninsula. We do, though, mostly see wanderers with rucksack and walking sticks in the streets of Santiago.

The symbol of the pilgrimage is the scallop shell. Saint James is actually depicted with this shell. Traditionally, such a Saint Jacob’s shell was the ultimate proof that you had really reached the Santiago de Compostela Cathedral – or even the Finisterre where you could easily collect these shells at the coast. Pilgrims returned to their home countries with the scallop shells (often attached to their walking sticks, rucksacks or hat) as the visible proof that they had attained their goal. When a pilgrim died back home, the shell was sometimes buried with him! 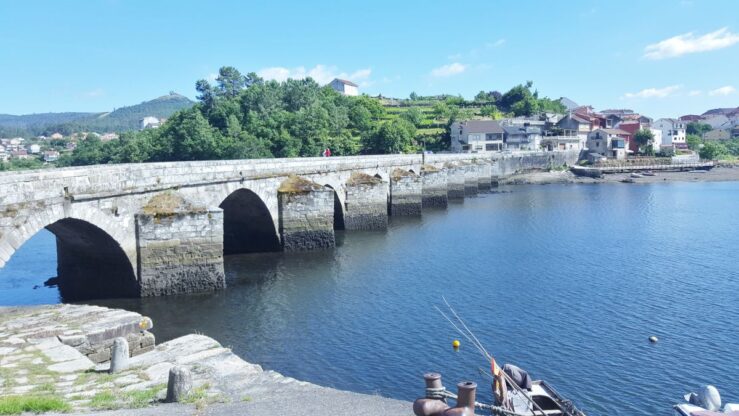 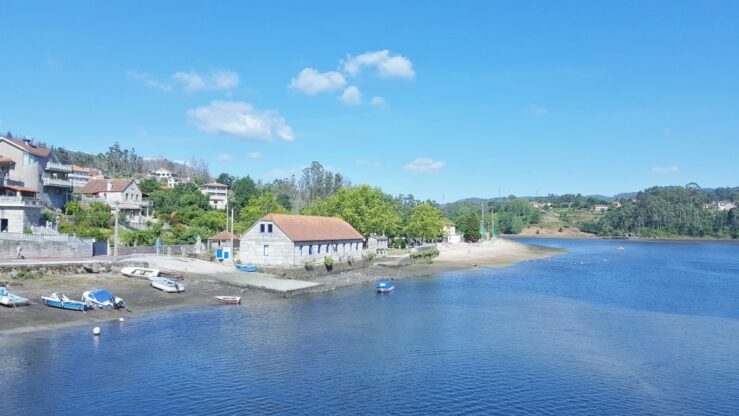 After arriving in Santiago de Compostela, I spot the scallop shells everywhere in the streets and in the small shops. The Saint Jacob’s or Saint James shells, cast in the pavement everywhere, show the way to the goal: Santiago de Compostela Cathedral. With time the town has turned the shells and other pilgrim related souvenirs into a profitable business.

We will be staying in the Albergue Seminario Menor which since 2011 has been available accommodation for pilgrims. The impressive monastery school stands on a hilltop with a magnificent view of the town.

In Albergue Seminario Menor boys have been religiously educated since the 1950s. Today, pilgrims arrive in droves to stay in the same spartan rooms that have been the boys’ focal point for faith and religious education.

On the stairs and in the dining hall we come across quite a few Spanish young people who have walked the long camino and been on the modern and at the same time classic grand tour through the landscape. Moreover, in Seminario Menor we encounter pilgrims from all four corners of the world and of all ages! It just cannot be more international and diversified than this, and the atmosphere is terrific! 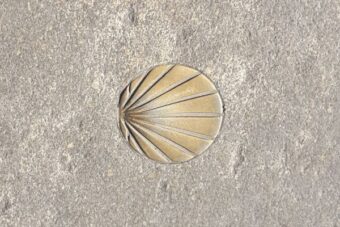 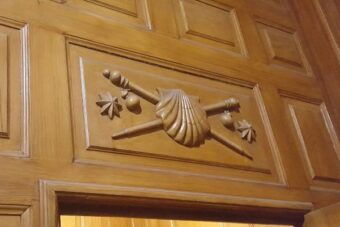 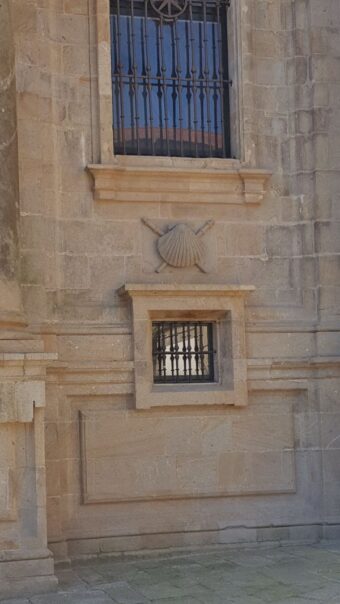 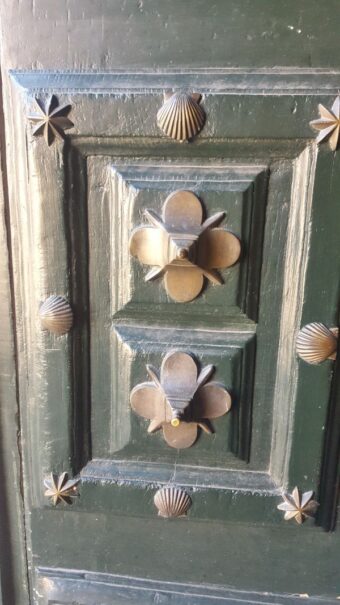 I also meet fellow travellers in the dormitories, where wide windows allow for the most breathtaking view, and in the spacious corridors filled with the newcomers’ laundry hanging to dry.

The enormous basement kitchen functions as the dining hall as well. When cooking together with everyone else in the open kitchen here, I get pleasant flashbacks to my college time. Seminario Menor even has a small shop with a selection of the most basic ingredients and wine. A couple of onions, ripe tomatoes, garlic, sausages and rice … and our pot simmers gently, until ready. 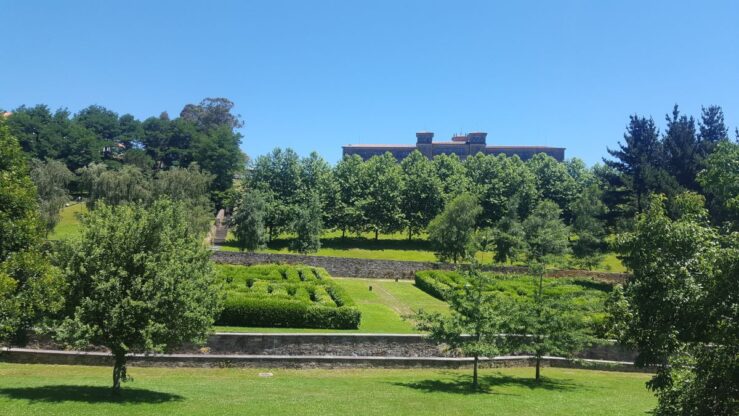 Albergue Seminario Menor is beautifully located on a hilltop | Photo: Travel In Culture

Next day we visit Santiago de Compostela Cathedral as well as a couple of other churches and monasteries. The crowds in the streets are noticeably in high spirits. We spot all kinds of people right from conventional tourists to nuns dressed in black and monks in brown robes. They all discretely blend in with the backpack loaded pilgrims who have a well-deserved rest on the steps.

It is Sunday and we attend the Sunday mass in the Cathedral where the priests in particular speak to the large number of pilgrims. This is definitely the highlight for many of the attendees after the long and exhausting walk to Santiago de Compostela. 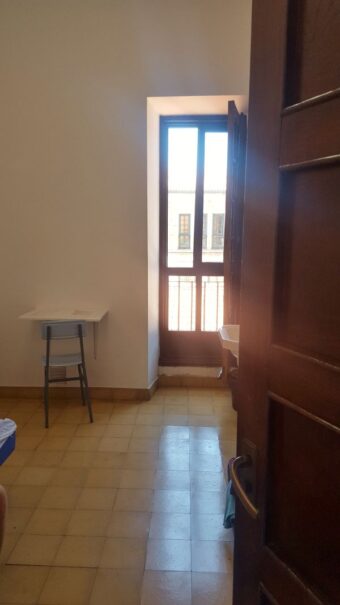 The old monastery cells is a good alternative to the dormitories in Albergue Seminario Menor. 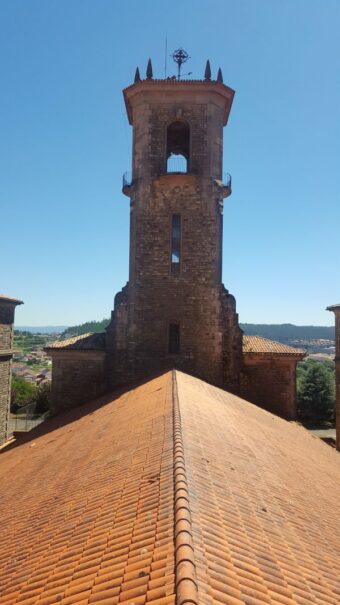 View from the dormitory floor.

In addition to the scallop shells, which symbolise the pilgrimage, and a bunch of other souvenirs, the speciality Tarta de Santiago is on display in the windows of the pastries. As we are not far from the coast, the restaurants abound with seafood. We get tempted by the octopus or pulpo they serve at a table outside and cannot refrain from taking a seat to try it here! It is absolutely delicious!

Afterwards we stroll around among the most impressive church constructions and monasteries of religious discipline, intricately woven into the university buildings. 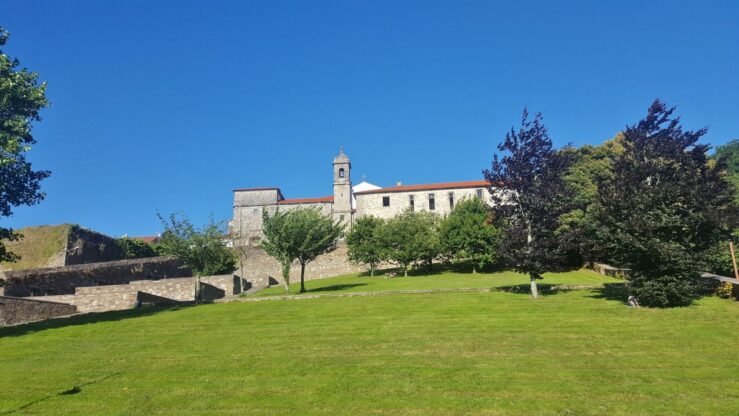 At the end of the day, back in Seminario Menor, we finally get time to process all impressions in the peaceful surroundings. We have opted for the modest single rooms, once being the religious scholars’ humble monastery cells, instead of the dormitory. The room style is appropriately simple with just a bed, a chair, a table and nothing else to disturb your mind and thoughts. It is the perfect place for reflection if that is what you seek!

The view of the monastery is great from my room. Contrary to what I initially suspected, it is not at all tedious to stay in each our plain monastery cell. I must actually admit that it is precisely what I need after the wealth of impressions, we have been exposed to during the day. It is the epitome of peace and tranquility and a true pleasure to be able to enjoy a thoughtful moment alone here. Seminario Menor is a real find!

Albergue Seminario Menor is a good options if you want to stay in a former monastery located a 10-minute walk from Santiago de Compostela Cathedral. The views of the city are great from here. There are both dormitories and private single rooms. The monastery is located opposite Belvis Park – and there is a large green park in front of the monastery.

Read next: Things to Do in Barcelona in 5 Days and Dalí Museum in Figueres