↓
GERMANY  Cologne features as its top attraction a world-famous landmark, the Kölner Dom, that any visitor to the city obviously must include in the itinerary. Besides the Cathedral, you will easily find many other interesting and curious things to do when visiting the German city.
Ainnelise Niyvold Liundbye
This page has affiliate links (if you purchase through our links, we get a small commission at no extra cost to you - thank you!), see our Privacy Policy & Disclaimer.
Table of Contents

1. Visit Cologne Cathedral
2. Explore Alter Markt
3. Discover Dufthaus 4711
4. Follow in the footsteps of the Romans
5. Have an art experience

Cologne Cathedral is without doubt the most visited landmark in Germany, but in addition to this spectacular historical sight, the city offers numerous other captivating things to do. A chocolate museum, a botanical garden, Baroque palaces, draft Kölsch beer, river cruises and Cologne Zoo are some of highlights worth mentioning in the city.

Read on to get inspired for interesting things to see and do in Cologne city – things that can all be done on foot since they are all located within walking distance of the Cathedral.

Where to stay in Cologne? Courtyard by Marriott Cologne in the heart of the city, Stadthotel am Römerturm 4-star hotel a 10-minute walk from Cathedral, Dorint Hotel am Heumarkt Köln spacious rooms, modern décor, some rooms with cathedral view.

Inspiration for Germany: Berlin in 3 days and Road trip in the Moselle Valley

No visit to Cologne without seeing the Cathedral, or Kölner Dom in German, which rises well above the roofs of Cologne and is visible from many spots across the city. As the largest Gothic church construction in Northern Europe, it is most impressive and definitely a must-see! 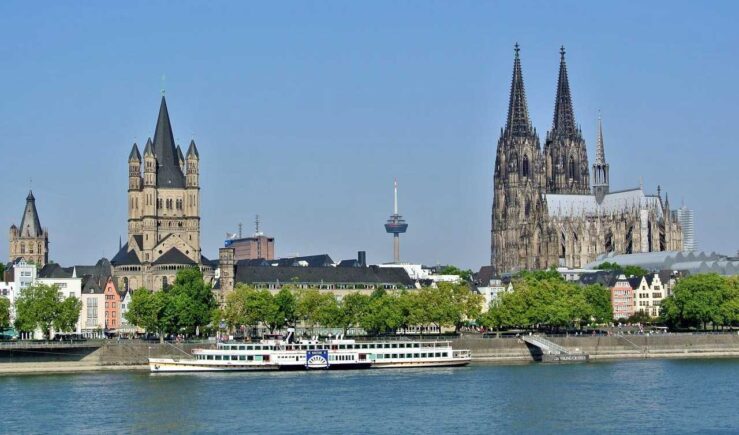 Officially, the name of the Catholic cathedral with the twin towers and spires is Hohe Domkirche Sankt Petrus, and it is the seat of the Archbishop of Cologne, as well as of the Archdiocese of Cologne. Due to its outstanding architecture, Cologne Cathedral was in 1996 declared a UNESCO World Heritage Site.

Construction of the Cathedral in the new Gothic style took place over many centuries. It was initiated as a medieval church in 1248 (intended as a site of worship for the Roman Emperor and as a place to keep the relics of the Three Kings, also known as the Three Wise Men) and not finalised until 1880 – with an interruption of close to 300 years, from 1560 until 1840! The inauguration in August 1880 was in the presence of Emperor Wilhelm I. 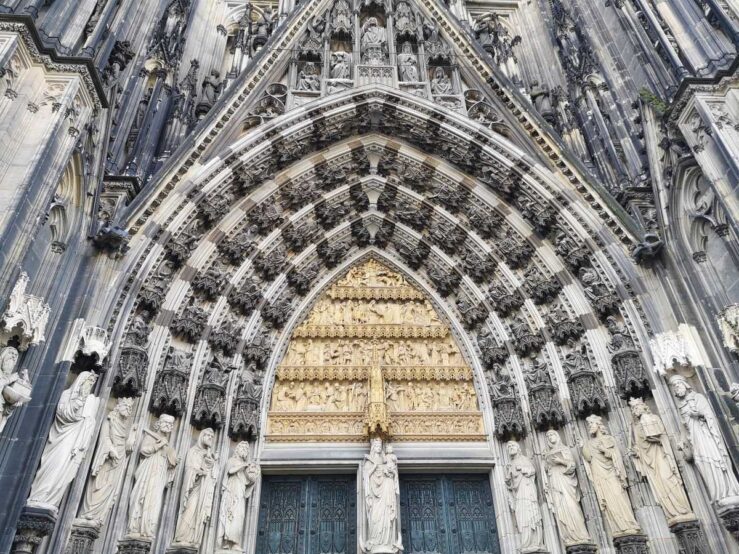 The main entrance of Cologne Cathedral was completed in the 19th century | Photo: Travel In Culture

Because of the relics of the Three Kings, Cologne Cathedral has throughout the years been a popular pilgrimage site, and the shrine still draws people to Cologne. The Treasure Chamber and the spectacular stained-glass windows are some of the highlights of the Cathedral.

If you have the energy for it, you may climb the over 500 steps of one of the 157-metre towers for great panoramic views of Cologne city!

One of the great things to do in Cologne is to explore the old town around Alter Markt, today a pedestrian zone. It is the city’s former marketplace with a beautiful fountain from 1884 as its focal point, and there are still historical houses flanking the vibrant square full of restaurants and bars with outdoor seating in summer. In winter you will find Cologne’s Christmas market here including a carousel, skating rink and food stalls. 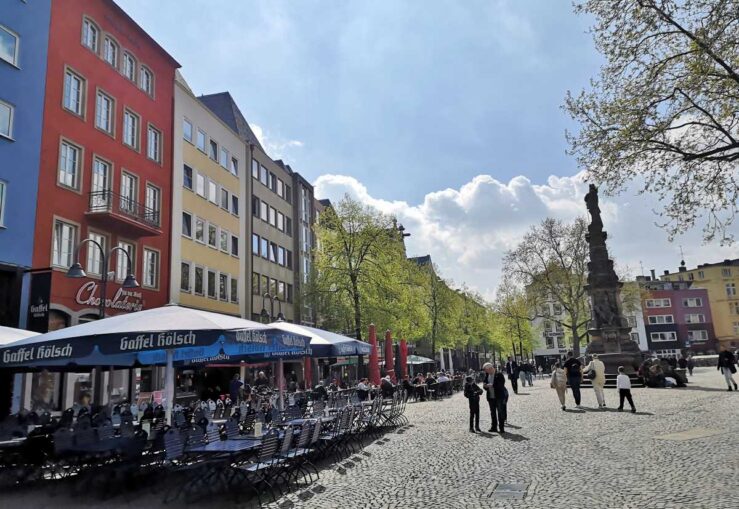 One of the charming squares today in Cologne is Alter Markt, located close to the other central square Heumarkt, the former Haymarket. | Photo: Travel In Culture

The oldest house dates back to 1580, but it is a known fact that there was a market here on site already in the 900s. Unfortunately, many of the historic buildings were destroyed during World War II.

Cologne’s historical town hall, the Kölner Rathaus, is located right at Alter Markt, a fine building built in both 14th-century, 15th-century, and Renaissance styles – reflecting the distinct periods. It is today one of Germany’s oldest public buildings. 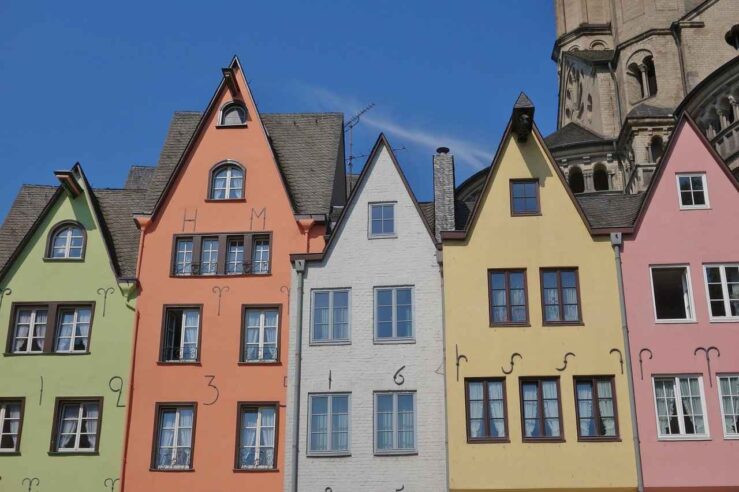 A stone’s throw away from Alter Markt, Cologne’s large Romanesque Great St Martin Church can be found. The church was built in the 1200s to replace the original Benedictine monastery. A few metres from Great St Martin, close to the Rhine River, the old ‘Fischmarkt’ is located, Cologne’s historic fish market – today a picture-post card sight with its pastel houses adorning the quarter. However, only a few Gothic houses are left here due to the World War II bombings.

Why not explore the house of the world-famous fragrance Eau de Cologne at the original location? Dufthaus 4711 in Glockengasse lets you discover the city history and authentic fragrance brand through a guided tour, intriguing museum exhibitions and inside the flagship store. You can also choose to order a fragrance 4-course menu or even attend a fragrance seminar! 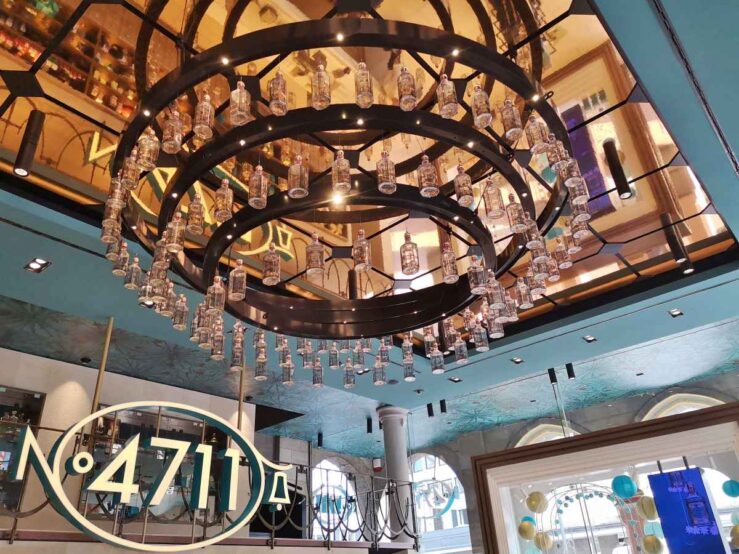 Entering the store, you will immediately notice perfume bottles everywhere – and not least a large tapestry depicting a mounted French corporal riding from door to door in Cologne, numbering all the houses. This was precisely the way Dufthaus 4711 received its number! 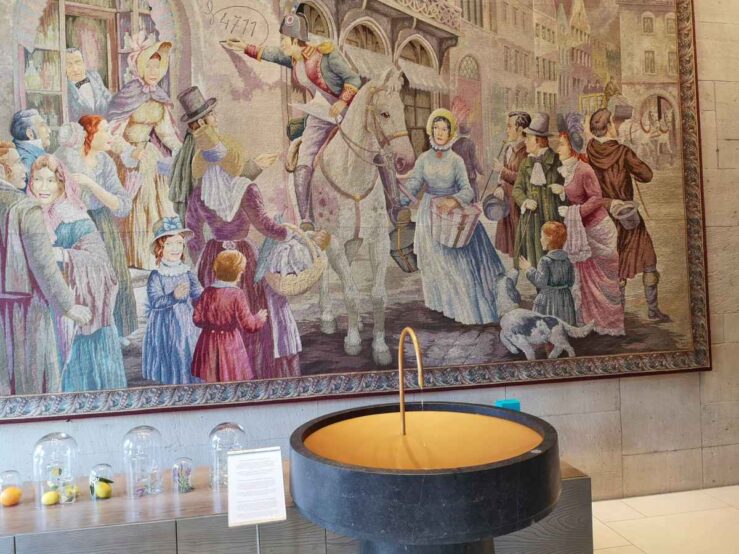 Just beneath the tapestry a very special fountain is placed. It is a fountain of Eau de Cologne – for everyone to reach out and scent the expensive drops while feeling them running through the fingers.

The city was founded in the 1st century by the Romans and obtained in 50 AD status as a Roman colonia with the name Colonia Claudia Ara Agrippinensium after Emperor Claudius’s wife, Agrippina the Younger, who was born there. Hence the name Cologne. 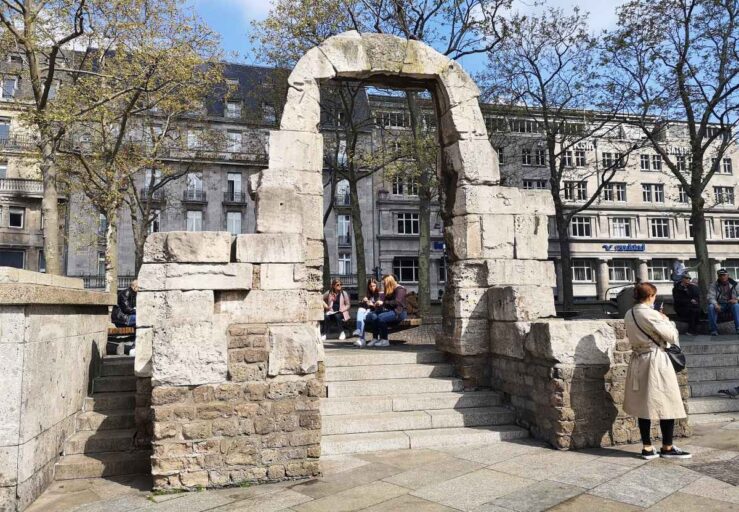 Cologne expanded militaristically and economically due to its favourable location on the Rhine, and it now became the capital of the Roman province Germania Inferior. Later, in 260 AD, Cologne advanced to being the capital of the Gallic Empire.

With the large number of imposing constructions erected, the Romans naturally left their mark on the city. Today ruins of these constructions can be found scattered around Cologne city. Many of the remnants are still underground, but you can find pieces of the Roman walls, gates and other ruins such as aqueduct parts, arches and towers in various places. 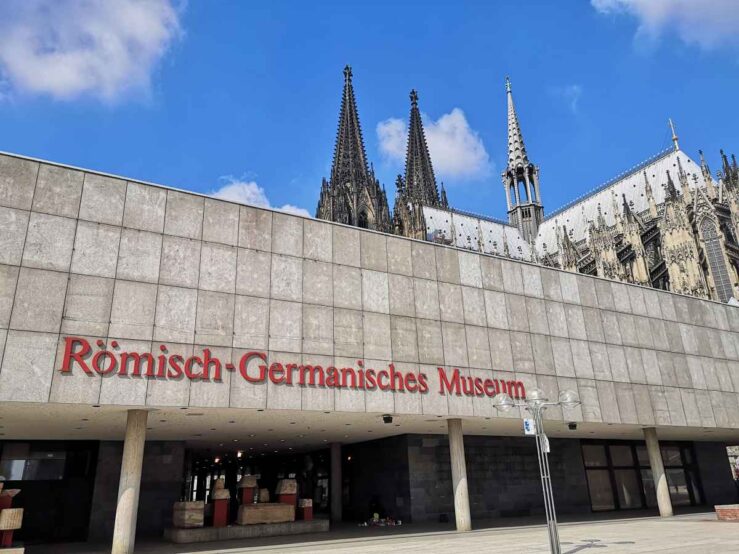 One of centrally located ruins is the Romans’ Northern Gate situated quite close to Cologne Cathedral.

On the other side of the Cathedral a multitude of ancient Roman artefacts have been collected in the Roman-Germanic Museum (Römisch-Germanisches Museum). A visit here is the straightforward way to gain insight into Cologne in Roman times. Among the items on display are locally produced Roman glass, vases, jewellery, mosaics, weapons, gravestones, portraits and much more. Moreover, you will find an entire villa in the museum basement, as well as the large original Dionysus Mosaic. All items contribute to an understanding of how Roman life took its course in ancient Cologne. 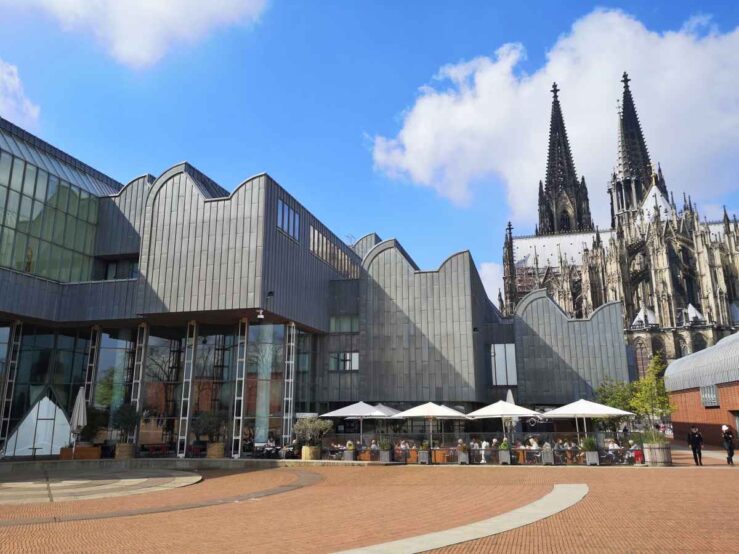 5. Have an art experience

Cologne is also the city to have an unforgettable art experience. One of the obvious things to do is to visit either the outstanding Museum Ludwig, Wallraf-Richartz Museum or another art museum or gallery in the city. Pick Museum Ludwig if you prefer modern and contemporary painting, and Wallraf-Richartz for outstanding work of the Cologne school. 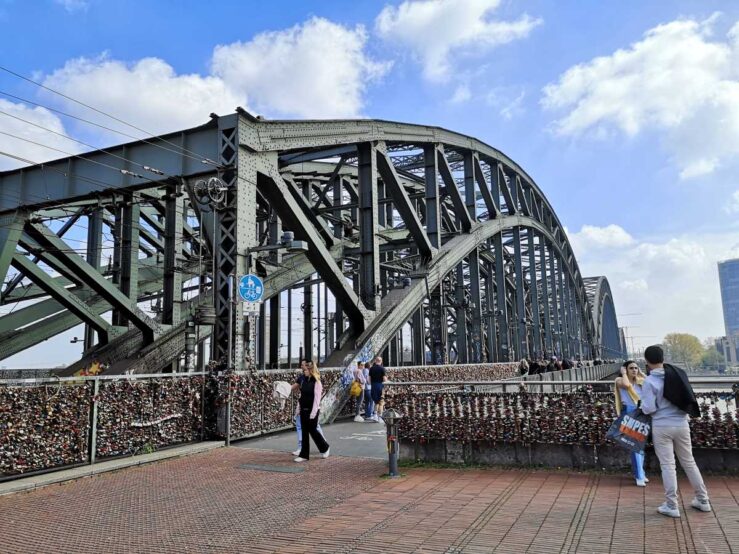 Anyway, if you are more after an unusual art experience, take a stroll on the three-arched Hohenzollernbrücke from 1911 crossing the Rhein. It is the only bridge in Cologne that was not destroyed during World War II. It is also the famous bridge in Germany where couples place their pink, red and other brightly coloured love locks, turning the bridge into an amazing work of art created by several hundred thousand peopled in union! Couples engrave their names on their love lock, hang it on Hohenzollern Bridge and finally throw the key into the Rhein. 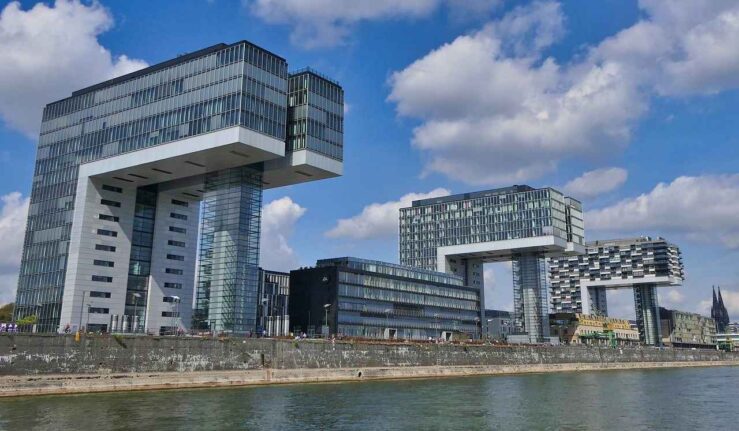 Another fascinating experience is to walk under the modern 60 m high Crane Houses, or Kranhäuser in German, an example of spectacular cutting-edge architecture. The Rheinauhafen waterfront complex is located on the Rhine and features a blend of residential and office buildings, as well as modern galleries and trendy cafés & restaurants. There are three 17-storey buildings having a crane-like shape, referring to the harbour cranes in the former riverport that they are now replacing. They were designed by the architects Alfons Linster and Hadi Teherani as part of an urban redevelopment project beginning in 2006. Being a huge open-air work of art, the Crane Houses are extremely popular with both residents and architecturally interested visitors.

Read next: Schwalenberg – Where the Swallows Soar and Artists Thrive

‘5 Things to Do in Cologne City’

5 Things to Do in Cologne City: