↓
NORWAY  Trondheim arose in the Middle Ages as a flourishing trade and shipping centre in central Norway, conveniently located at the Nidelva river mouth. Today, it is a sprawling and modern university city, yet preserving outstanding historic buildings from its glorious past.
Ainnelise Niyvold Liundbye
This page has affiliate links (if you purchase through our links, we get a small commission at no extra cost to you - thank you!), see our Privacy Policy & Disclaimer.
Table of Contents

-> Where to stay in Trondheim?

Trondheim is today the third most populous municipality in the country and a central hub connecting the sparsely populated Northern Norway with the more dense southern regions. It is at the same time a modern, vibrant Scandinavian city, a recognised centre of cutting-edge science and technology research at the Norwegian University of Science and Technology (NTNU), as well as an important historic site featuring the cultural heritage since the Middle Ages. Amazingly, it still exudes the charm and the character of a bygone time! 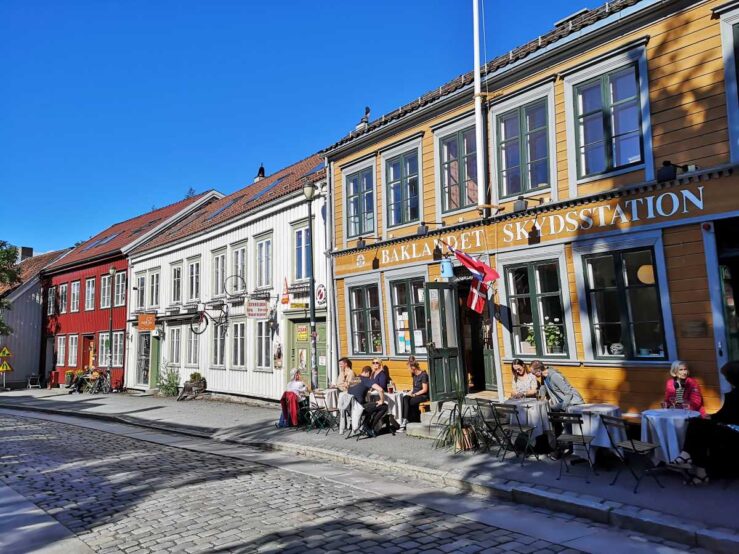 Nidaros Cathedral, Bakklandet, Erkebispegården, Stiftsgården and Kristiansten Fortress are all each their integrated part of present-day Trondheim with its lively city centre, active student life and vibrant cultural scene. Top-notch restaurants, cosy cafés, fashionable boutiques and interesting sculptures are all part of the cityscape, together with one of the newest inventions in the city, the bicycle lift Trampe. 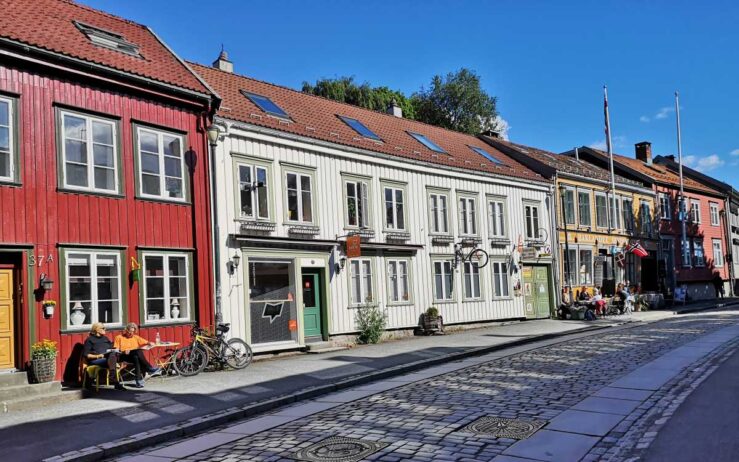 Trondheim has in a harmonic symbiosis between the thriving and dynamic city full of student life, contemporary culture and historic surroundings managed to preserve the allure from the olden days.

Here we describe 5 of the top cultural and historic sites that you absolutely must include in your Trondheim visit!

When visiting Trondheim, you will definitely have to enter Nidaros Cathedral as one of your top priorities! 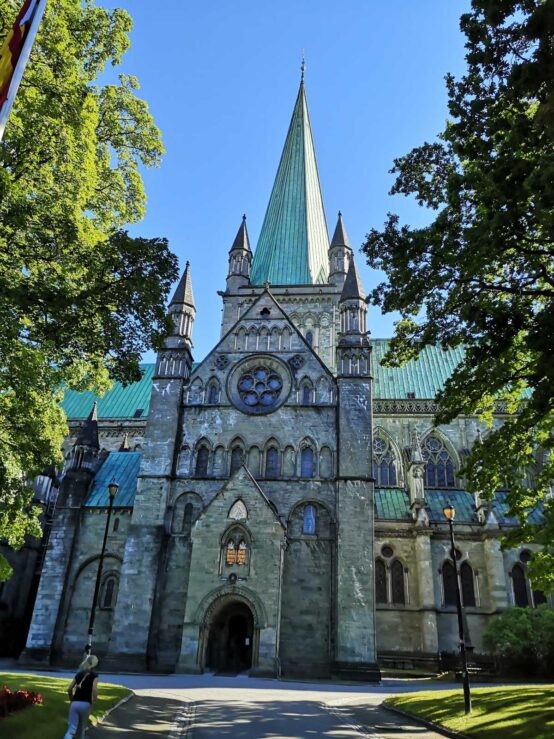 The settlements along the river Nidelva go back to the Viking Age. Originally, Trondheim was a Viking assembly and merchant site at the river mouth, at the time known as the Øreting. It is, though, believed that Trondheim was really founded in 997 by Olav Tryggvason who had taken the throne in Norway after the murder of the Danish king. Under his rule Trondheim became the first Norwegian capital.

At first the town was named Kaupanger (‘trading place’), but shortly the name was changed to Nidaros. It was not until the Middle Ages that the name Trondheim became common.

In 1015, Olav Haraldsson ascended the throne, and, presumably, as Norway’s king, he played a major role in the spread of Christianity in the country. 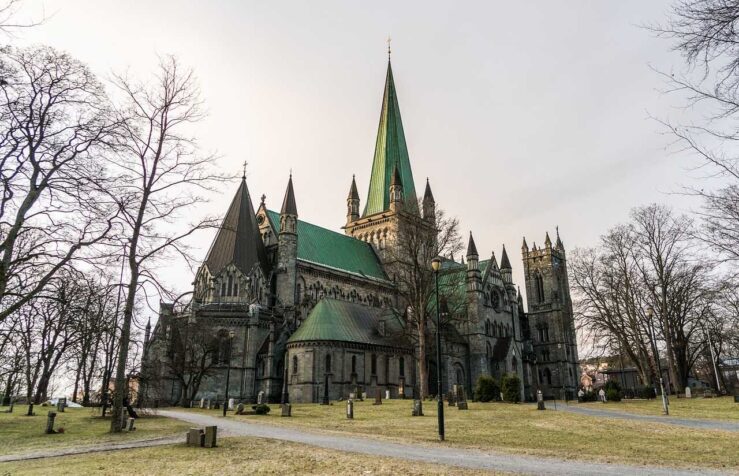 What later ended up as the impressive Nidaros Cathedral was in the beginning really just a simple wooden chapel.

After Olav Haraldsson was killed at the Battle of Stiklestad in 1030, his body was enshrined in the small chapel. The King was canonised as Saint Olav by Bishop Grimkjell of Nidaros.

Therefore the Cathedral was erected over King Olav’s burial site.

Over the years the structure gradually expanded and developed into the spectacular Nidaros Cathedral that stands in Trondheim today.

The Nidaros Cathedral became the seat of the Lutheran Diocese of Nidaros, and after the Reformation it was taken over by the State Church of Norway. Trondheim remained the capital of Norway until 1217, when Bergen, as a ‘Hanseatic office’, took over, until Oslo finally achieved its status as Norway’s capital. 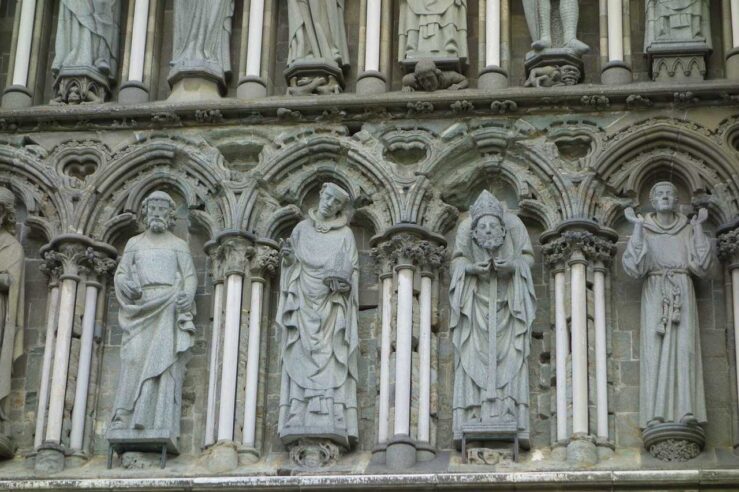 The present Norman-Gothic edifice is a result of many reconstructions. A noticeable façade is made up of intricate carvings, and the Middle Age statues and other details have been restored by proficient art sculptors during the 1900s.

Still today, Nidaros Cathedral is the northernmost medieval cathedral in the world. Moreover, the tomb of St Olav, the Viking king who became the patron saint of Norway, is a pilgrim destination for many Europeans, as well as one of the most popular tourist attractions in both Trondheim and Norway!

Wherever you start out in Trondheim, you will sooner or later arrive at the river Nidelva with the characteristic row of wooden houses on both sides as one of Trondheim’s culturally most interesting facets. 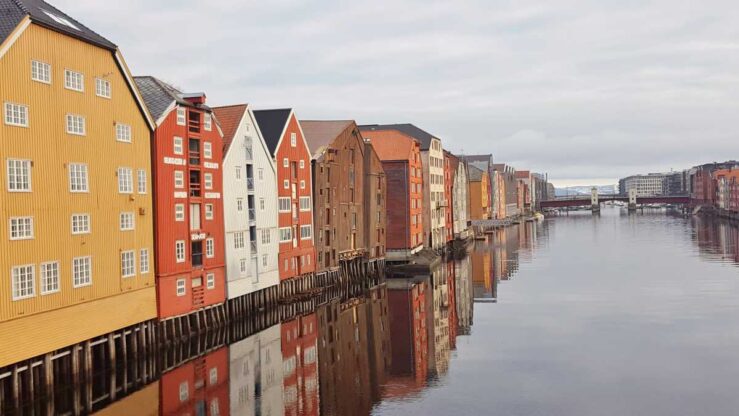 Trondheim features a spectacular historic old town of warehouses and merchant’s houses dating back to the 18th and 19th centuries. The river is notably flanked by old, colourfully painted timber buildings on the embankment, and the iconic red wooden bridge, Gamle Bybro, from 1685, crossing the river. It is a testimony over the old trading port and the merchant hub that Trondheim once was in Norway.

Today, Bakklandet is a lively part of town and a charming blend of cosy outdoor cafés, restaurants, boutiques and residential houses. You will find a special cultural identity and environment here in the idyllic heart of old Trondheim.

An innovative approach in Bakklandet is the quirky device, the bicycle lift Trampe, which is frequently in use by thousands of students and other residents to ascend the steep hill Brubakken by bike.

Bakklandet started developing in the 1600s, when Trondheim saw a need for a new part of town. Wooden houses were constructed here as homes of the working class, including fishermen and labourers. Approximately 10,000 people used to live here along the river in such wooden accommodation. 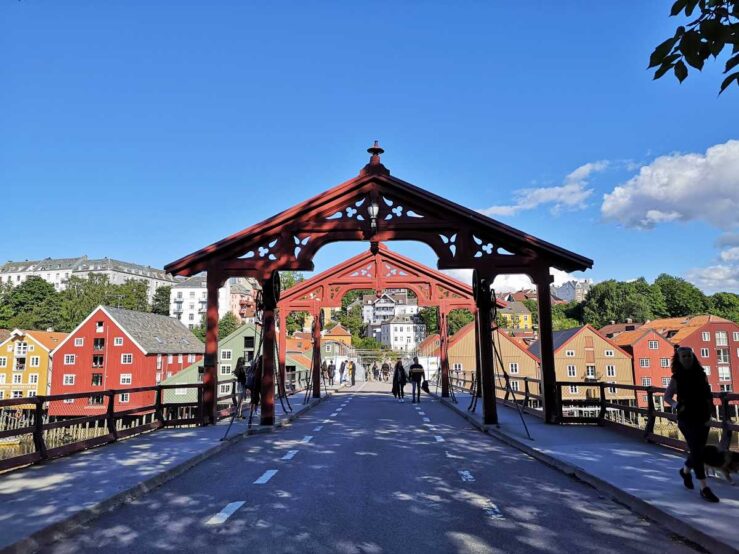 The last siege was in 1718 where a large part of the wooden houses were set on fire. Nevertheless, the buildings were reconstructed soon hereafter, and since then it has been possible to preserve the wharf and adjacent cobblestone streets with their charming, colourful historic houses located along the river.

The scenic and authentic old riverside warehouses with the fronts partly resting on wooden pillars in the water are just amazingly unique – and awesome cultural heritage in the old Nordic city! 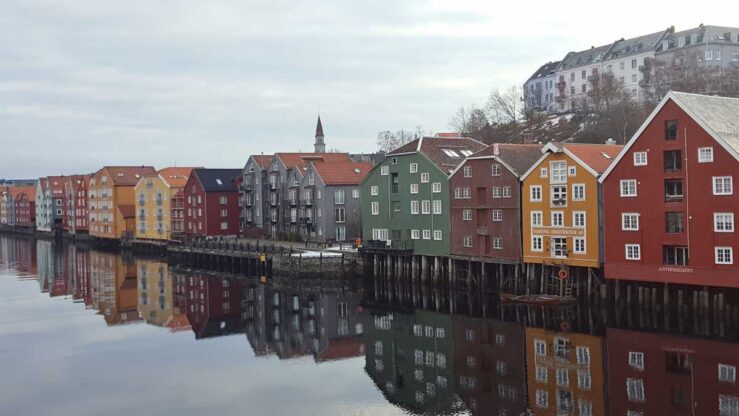 You will find the 12th-century Archbishop’s Palace, Erkebispegården, located just next to Nidaros Cathedral. It is Scandinavia’s oldest secular building and one of the best preserved buildings of this kind in Europe.

In its heyday, the Palace was the centre of the Norwegian archdiocese, which at the time also comprised the Faeroe and Shetland Islands, the Isle of Man, Greenland and Iceland.

Throughout its existence the construction has been the residence of some of the most powerful men in Trondheim and Norway, the location for exceptional meetings and celebrations, as well as a military site after the Reformation. 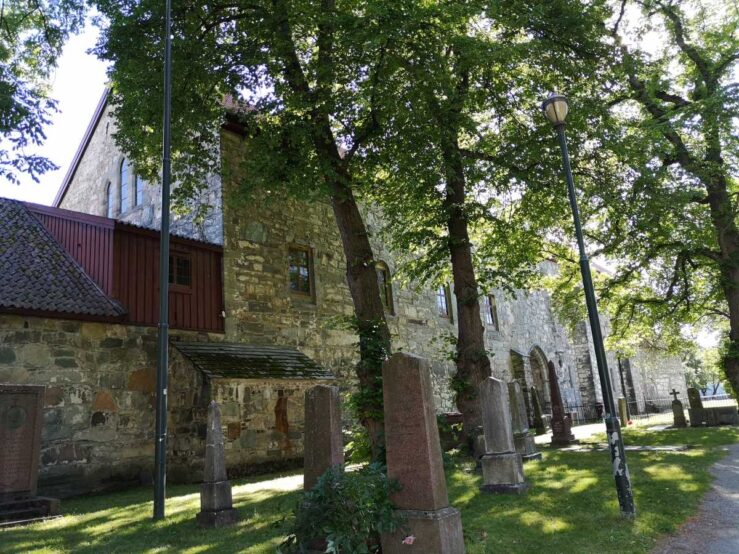 In 1983, a large fire unfortunately burned down two large storage buildings belonging to the Archbishop’s Palace. The current museum has been built on the very same site where these original constructions once stood.

In recent years archaeological excavations have been undertaken and they have resulted in a large number of finds – about 160,000 – as well as remains of around 100 buildings! During the excavations three former mints were revealed, among them one which was used under Archbishop Gaute Ivarsson.

You can also visit the historic Kristiansten Fortress, located above the city and visible from most places in Trondheim. 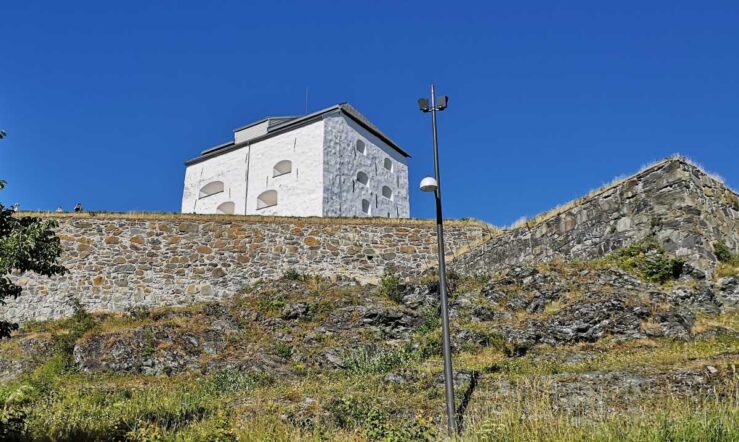 Multiple times Trondheim’s wooden buildings have been devastated by fire, actually it has happened all 15 times during the last 500 years. After the 1681 fire, a fortress, Kristiansten Fortress, was erected above the city to defend it against potential attacks from the east. Towards the east, Trondheim had for many years lacked the protection that the city naturally enjoyed to the other sides by the river Nidelva and Skansen.

The fortress was named after the Danish-Norwegian King Christian V, and it successfully defended the city of Trondheim during the Swedish attempt to invade the city in 1718 in the Great Northern War, led by Karl XII of Sweden and General Carl Gustaf Armfeldt. Kristiansten Fortress resisted the siege and thanks to the harsh winter in Trondheim, the Swedish troops could not receive the necessary provisions. Therefore the forces retreated – and in a significant number of cases died in the cold.

In 1905, Prince Carl of Denmark was proclaimed as the new King of Norway precisely here at Kristiansten Fortress – under the name of Haakon VII of Norway.

Kristiansten Fortress also played a role under the German occupation in WWII. It was both here that the Nazis executed Norwegian patriots during the World War and also here that traitors were executed after the War.

A fifth fascinating construction you will have to put on your Trondheim bucket list is Stiftsgården, centrally located in the city centre. It is the official Royal Residence in this part of Norway, where the Royal Family stays when visiting Trondheim. Supposedly, it is still the largest wooden palace in Northern Europe. 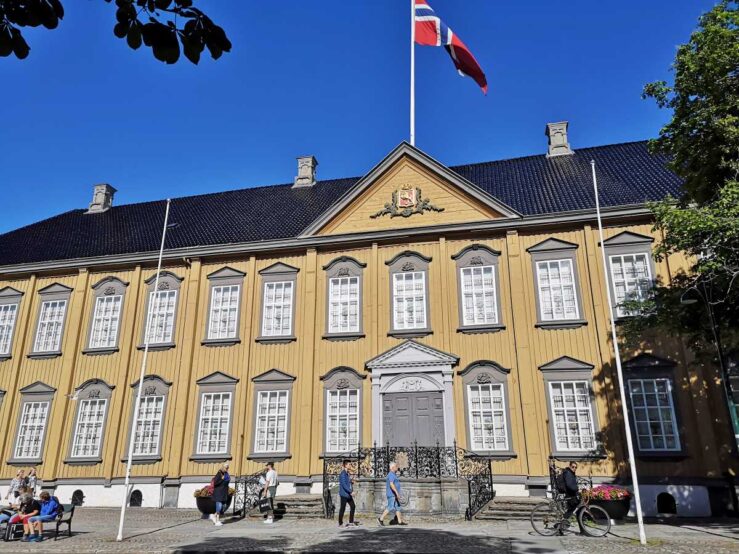 The structure is erected in a baroque classicist style with a touch of rococo and neoclassicism. It was built between 1774 and 1778 as the spacious home of Lady Cecilie Christine Schøller with over 100 rooms! The proficient architect unfortunately remains unknown.

In 1800, the Norwegian state took over the palace, and it was then for many years used as the Royal Residence at appropriate occasions. From 1906 it served entirely as the official Royal Residence in Trondheim.

Stiftsgården has been the setting of a number of coronations, royal and state visits, most recently for instance the celebration of King Harald’s and Queen Sonja’s 25th jubilee in 2016.

Going to Oslo? Then read 9 Cultural Sites to Experience in Oslo

Would you like to get inspiration for 2 days in Bergen? Then read Bergen Itinerary & Travel Guide 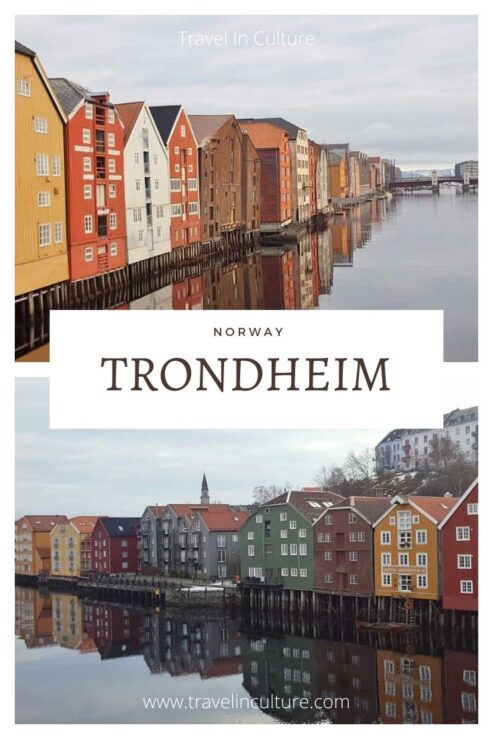 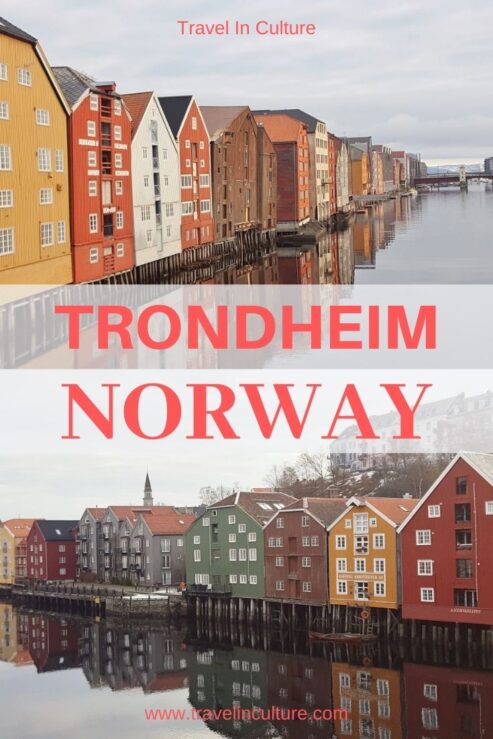