↓
ITALY  Tucked away in a Tuscan hill chain you will find Volterra – one of the lesser known villages in Tuscany. From an architectural point of view Volterra is a fine blend of medieval, Roman, Renaissance and Etruscan style, and one of the most charming, hilltop villages that is not too overrun by tourists – a real gem in Tuscany!
Ainnelise Niyvold Liundbye
This page has affiliate links (if you purchase through our links, we get a small commission at no extra cost to you - thank you!), see our Privacy Policy & Disclaimer.
Table of Contents

1. Volterra’s history
2. What to see in Volterra
3. How to plan a day trip to Volterra
4. Where to stay in Volterra

You arrive in Volterra by the winding road which snakes up the soft, rolling hillside. All along the route the views are absolutely breathtaking – not least when you finally reach the walled hilltop village overlooking the valleys of Era and Cecina. Volterra is beautifully located on the highest peak of all the hills. People gather here just off the ancient walls to enjoy the stunning scenery picturesquely surrounding Volterra village and other nearby villages in Tuscany.

Travel Tips
Advertisement
Where to stay in Siena? Albergo Chiusarelli with a top location in the heart of Siena, Hotel Duomo with a rooftop terrace in the historical centre of Siena.

Inspiration for Italy: Discover Siena and 5 day trips from Florence and San Gimignano – the ancient skyline

On the other side, it is a crag where the rocks abruptly fall into the valley. Viewing all across the Tuscan landscape, you will on a clear day right above the horizon be able to catch a panoramic glimpse of the Mediterranean. 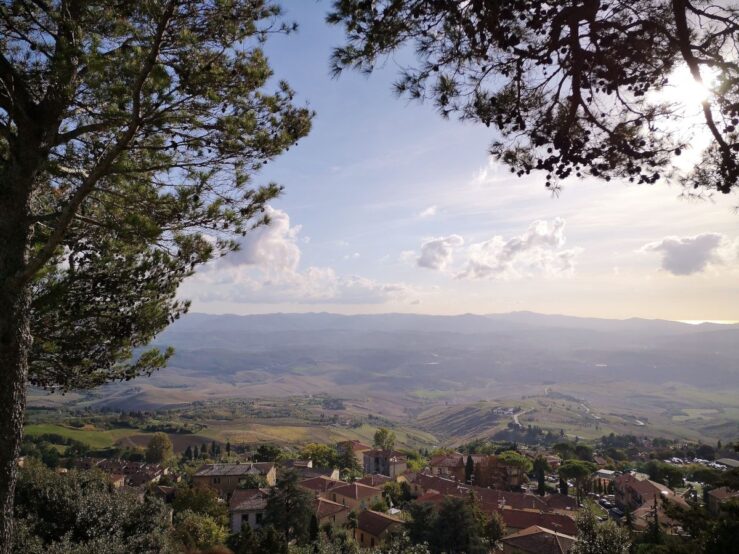 Volterra is situated at an altitude of 545 metres. The town originates from the Villa Nova culture (existing in the 9th-7th century BC). During the 7th century BC it developed as an important Etruscan settlement, becoming one of the major Etruscan towns. It soon became a functioning, political community with even a mint striking coins.

The Etruscans used the abundant resources from the area around. They got salt as a preservative from the salt beds below the town. Besides, the surrounding hills were loaded with iron, tin and lead. For centuries Volterra was a flourishing place with a thriving culture, enjoying its strong position among the other neighbouring villages in this part of Tuscany. It was seemingly easy to keep this position due to its strategic location atop the hills.

Today, there are still many well-preserved remains from the Etruscan period. When strolling around in Volterra, you may yet, surprisingly, come across the ruins of an Etruscan burial place. 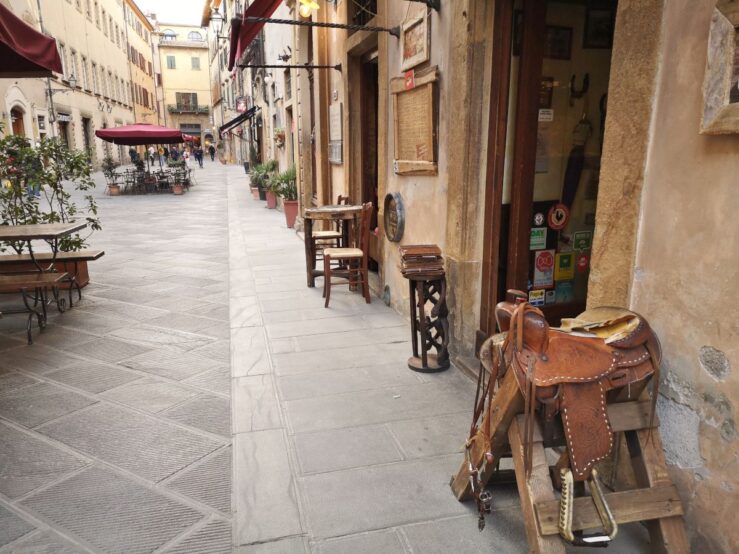 However, in the 1st century AD the Romans arrived in Volterra and took over the power from the Etruscans. With the Romans the Etruscan constructions were abandoned and replaced by Roman architecture. Still today, there are many traces from the Romans. Recently, a new site has been discovered in Volterra which has appeared to be an amphitheatre like the Colosseum in Rome. It is probably one of the most significant Roman remains discovered for many years. It is thought to have been able to seat about 10,000 spectators – which is around 1/5 of the number Colosseum could accommodate. Another fine Roman theatre is located just one mile from the new site. Also a complex of Roman baths is part of the remnants of the Roman rule. 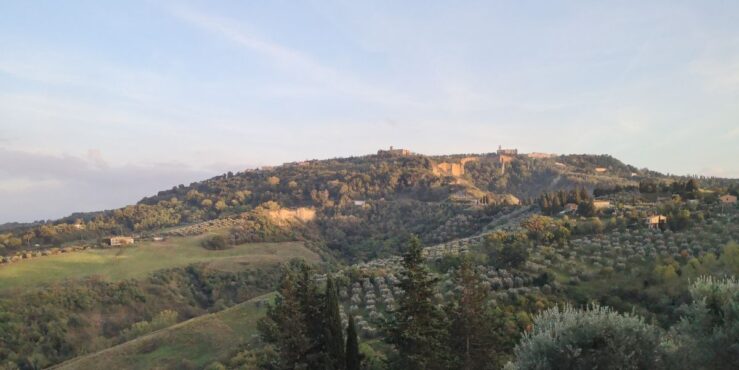 Of all the villages in Tuscany, Volterra later became the focal point and place of interest of the Republic of Florence – and eventually the hilltop town was conquered by Florence. After the Republic fell in 1530, Volterra came under the control of the prominent Medici family.

2. What to see in Volterra

Above the Archaeological Park you will find the impressive Fortezza Medicea, which has been an operating prison since the 1400s. Here, quite a few renowned Mafiosi have served their sentence! 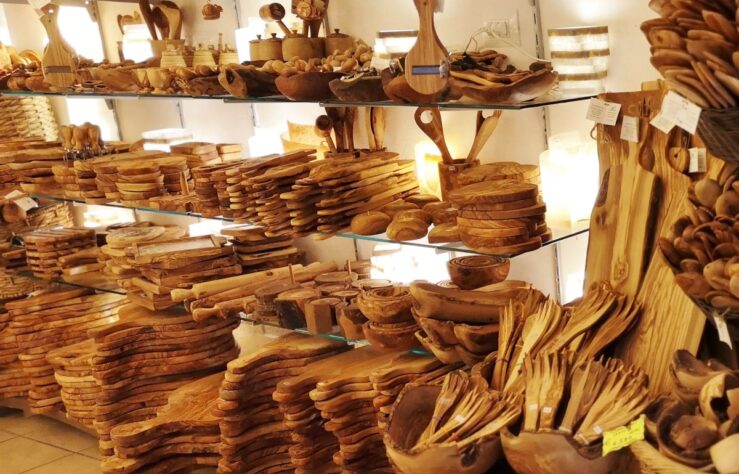 Already the Etruscans used the rich existence of the mineral resource alabaster to produce sarcophagi. Alabaster was also nearly exclusively used for cinerary urns. However, later it became a tradition to use the large natural deposits of alabaster to produce unique artisan craft.

There is today an alabaster museum, the Ecomuseum of Alabastro, in Volterra. Alabaster products are being sold in the small shops deep inside Volterra’s heavy stone buildings, together with cutting boards and cutlery of olive wood, local food specialities, Tuscan wine and precious truffles. The offer reflects that many artisan workshops and studios with classical alabaster works are still active in Volterra today. If you want to see the process, you may even get a chance to visit one of them. 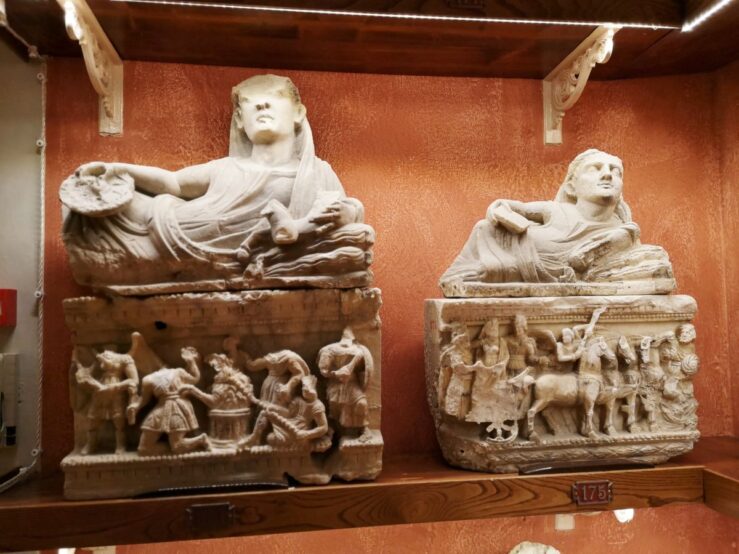 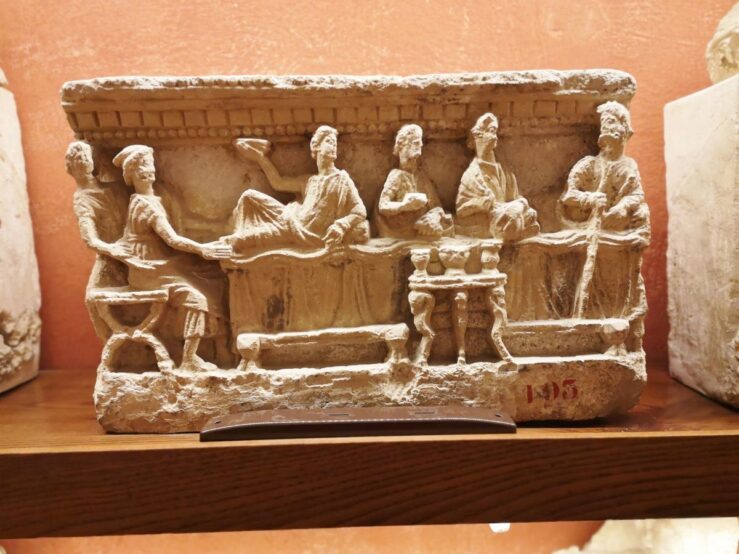 One of the most outstanding Etruscan museums in Italy is the Etruscan Guarnacci Museum. It was founded already in 1761. The museum contains the largest private collection of Etruscan artifacts in the entire Italy and it holds an impressive collection of reconstructed tombs and typical Volterra urns and sarcophagi. A large number of cremation tombs have been found in the necropolis. Almost exclusive to this region, the ashes were placed in a funerary urn, inside a sarcophagus. The museum displays a large number of such decorated funerary urns, carved alabaster sarcophagi and tombs. It is definitely a must-see when you visit Volterra.

On the first floor of the museum you will also find a rare collection of Roman mosaics from buildings of Imperial Rome in Volterra and from Segalari. Moreover, there is an impressive collection of coins with the finest examples of Etruscan coins in gold, silver and bronze, as well as over three thousand Greek, Roman Republican and Imperial coins and bronze figures. Many of the items have been excavated locally within the city walls. 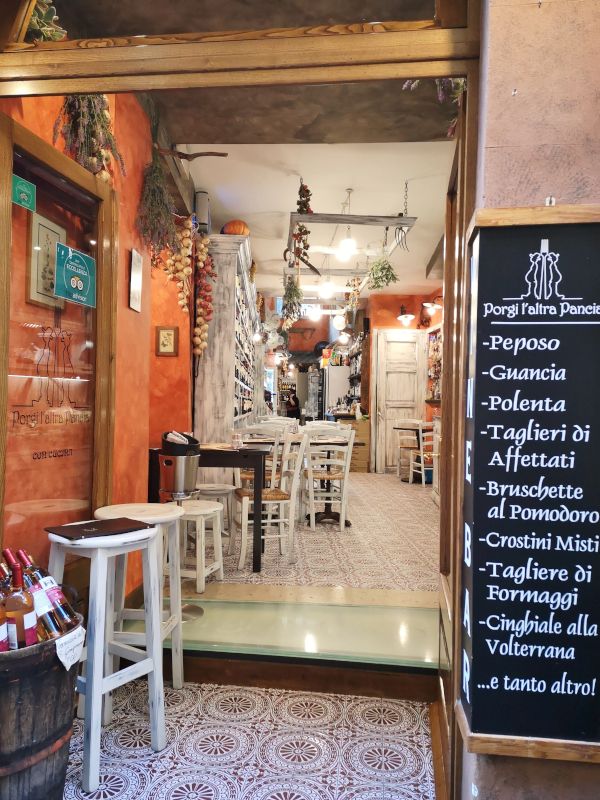 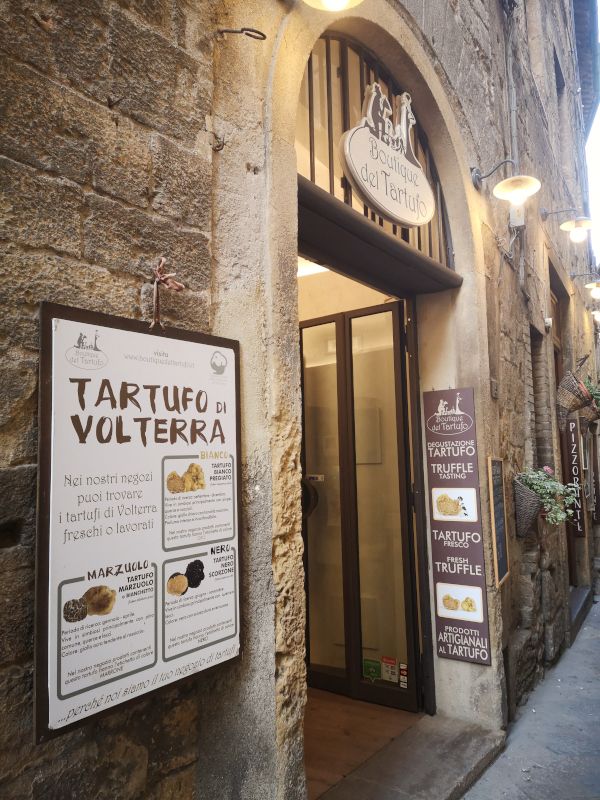 When walking around the streets of Volterra, you will notice a very authentic ambiance. Small local restaurants and cafés with a unique character are astonishingly hidden inside massive cream and yellow stone houses with a twist of medieval setting.

The place is not at all touristy like Florence or Pisa. The vibe is local and pleasantly unsophisticated, and you easily lose the sense of time. It is not exaggerated to say that you are likely to feel the breath of history as you walk through the cool twilight streets at the end of the day.

3. Plan a day trip to Volterra

See here how to plan a day trip to Volterra in Tuscany and read more about the things to do in Volterra.

4. Where to stay in Volterra
Advertisement
Hotel La Locanda offers classic rooms with free Wi-Fi. It is decorated with Etruscan carvings. The hotel is located in the historic centre of Volterra in a converted nunnery near the Roman Theatre and the Porta Fiorentina Gate, and features spa bath or a hydromassage shower.

Toscanamente is an air-conditioned apartment featuring a shared lounge, fully equipped kitchen and a terrace, as well as free WiFi and garden views. A continental breakfast is served. The property is located 600 m from Volterra centre.

Albergo Etruria is located in Volterra’s historic centre in a renovated 8th-century building just 100 m from the Piazza dei Priori and the Roman theatre. Rooms have free Wi-Fi and the gardens have town views. The hotel is also close to the Etruscan museum.

Check also our Travel Guide to Florence out!

Read next: 5 Cream-of-the-Crop Day Trips from Florence and 3 Tuscan Towns in a Day 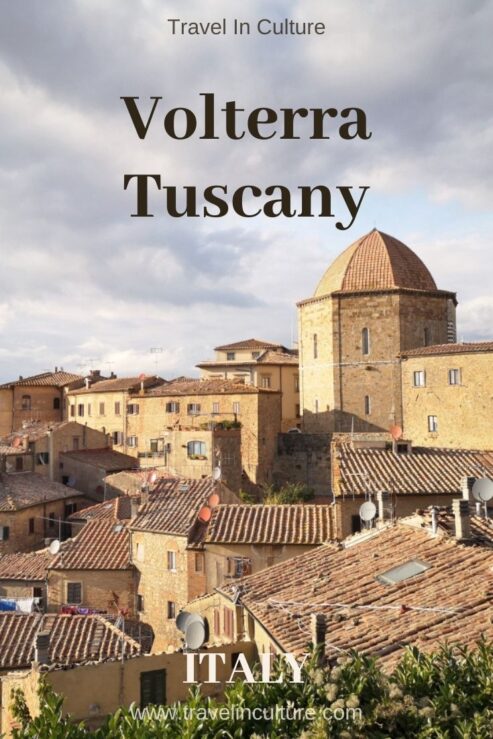 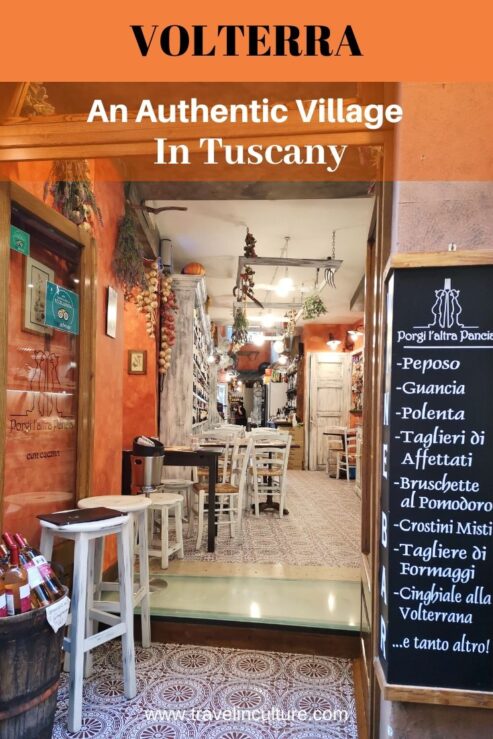