↓
ITALY  People have always come to Montecatini Terme in Italy to benefit from the rich mineral sources. Already the Medici family was interested in reclaiming the wetlands around Montecatini in Tuscany, and still today Montecatini is with its beneficial thermal baths and mud treatments a popular spot in Italy.
Ainnelise Niyvold Liundbye
This page has affiliate links (if you purchase through our links, we get a small commission at no extra cost to you - thank you!), see our Privacy Policy & Disclaimer.
Table of Contents

1. The history
2. The thermal baths
3. Montecatini Alto
4. Where to stay in Montecatini Terme

Montecatini in Italy is a vibrant, small Tuscan town with a lively nightlife and fashionable designer stores. Especially during weekends you can experience the vibe of the place on the streets and squares and in the local Tuscan restaurants, bars and cafés. 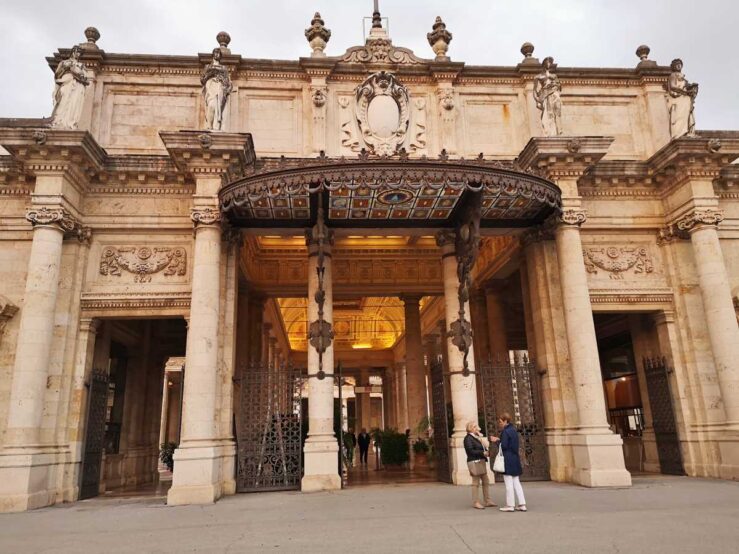 Cultural life has always thrived in Montecatini. The setting of the thermal waters gave unique inspiration to great artists. Music has for centuries played an important role in the thermal town. Several composers have found inspiration during their stays in both Montecatini Terme and Montecatini Alto, among these prominent composers like Gioacchino Rossini, Giacomo Puccini and Giuseppe Verdi. In Montecatini, Verdi composed the third act of Otello. Also Richard Strauss was one of the eminent guests of the thermal establishments in town.

Where to stay in Florence? Hotel Palazzuolo (budget) in the historic centre near the Cathedral, Hotel Bellavista (mid-range) near Santa Maria Novella Station and the Cathedral, AQA Palace (top) near Palazzo Vecchio/Piazza della Signoria.

Inspiration for Italy: Exploring Siena and Volterra in Tuscany and 5 cream-of-the-crop day trips 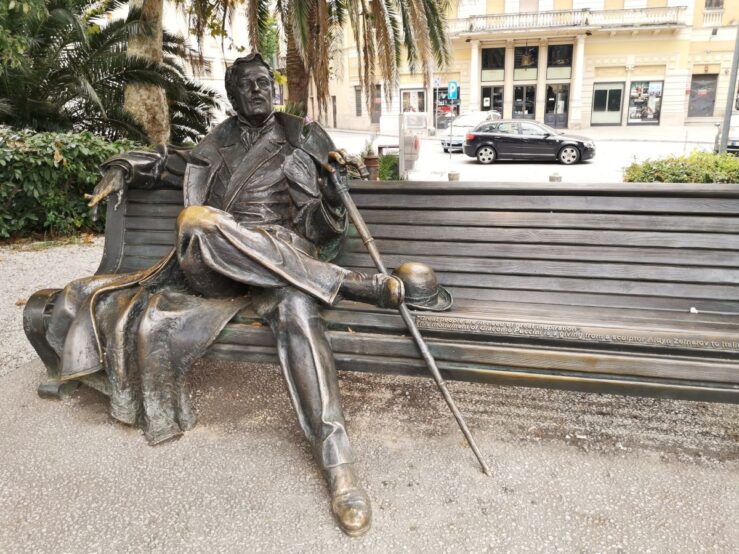 A statue of the composer Giacomo Puccini is donated to Montecatini by the Russian artist and sculptor Aidyn Zeinalov | Photo: Travel In Culture

Both the Medici family and later on the Lorraine family from Florence were interested in reclaiming the wetlands around Montecatini in Tuscany.

The wetlands and springs in Montecatini have always been reputed in Italy. The marshland around Montecatini is one of the largest wetlands of this region in Italy, also known as Palude of Fucecchio. The thermal sources of the region have been reputed for a very long time. Even the Romans probably knew about the therapeutic properties of the thermal springs, since there was already at Roman times a road passing close by Montecatini. Also Hannibal of Carthage is known to have passed through the challenging swamps.

In medieval times there was even an early spa in the area, and extraction of salt from the water for health purposes knowingly took place by then. However, it was also a time dominated by prevailing fights and battles between the neighbouring cities of Lucca, Pisa and Florence. In this part of Italy the marshes around Montecatini Terme made up the battlefield. The Battle of Montecatini in 1315 resulted in many deaths in the muddy marshes. 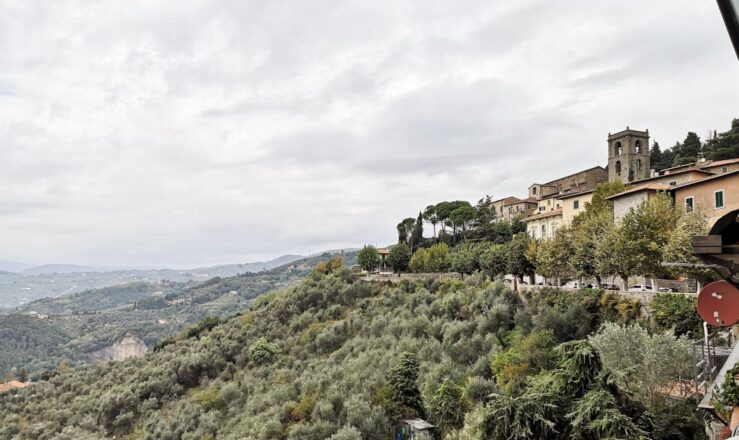 For centuries to come the area went through conditions of famine, outbreaks of malaria and other epidemics sweeping through the flooded marshland. Only in the 18th century did the area really get under control. The Grand Duke Leopold of Tuscany came to Montecatini in 1772 and initiated the channeling of the mineral waters to drain the marshes. With him the restoration of Montecatini Terme began. It soon became a cherished place for relaxation and thermal treatments among the aristocracy. 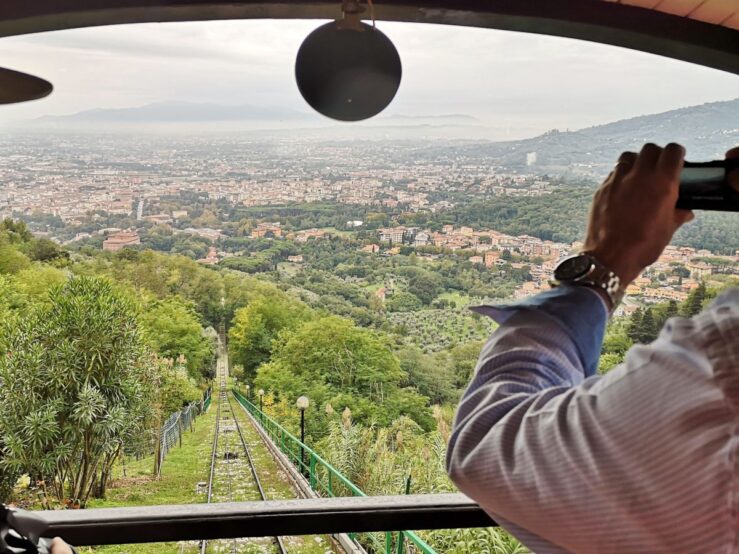 Then, in the beginning of the 20th century, the development of the spa complex of Montecatini really took off. The three original baths were the Bagno dei Merli, the Bagno Della Regina and the Bagno Nuovo. The latter today exists as Terme Tettuccio. Other baths were Terme Excelsior, Terme La Fortuna, Terme Nueve Redi, Terme Rinfresco, Terme La Salute, Terme Regina, Terme Tamerici, Terme Torretta and Terme Leopoldine.

A few of these spa baths are closed today, whereas others have been renovated and are in use as highly popular retreats and symbols of their glorious past. It is possible for visitors to buy a day pass to get access to enjoy the spa treatments here. 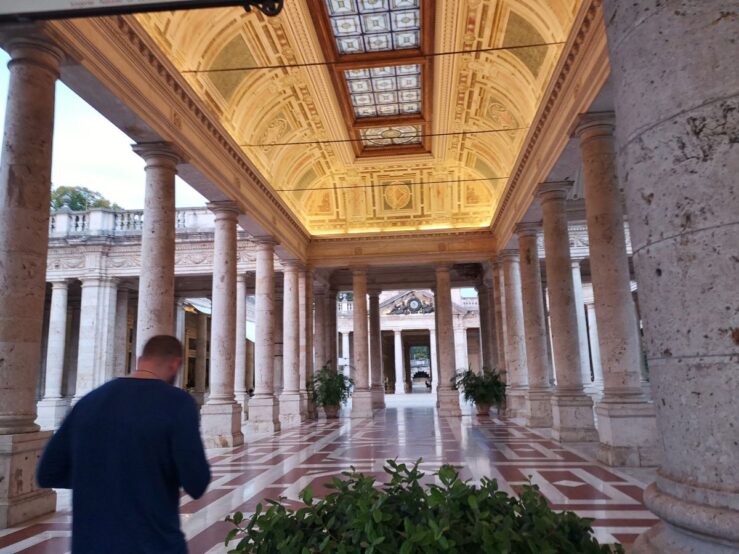 Terme Tettuccio with its marble constructions and lavish decorations | Photo: Travel In Culture

The thermal offers are based on various types of treatments. The thermal baths specialise in everything from hydropinic therapy, mud treatments, mud-bath treatments, inhalations and thermal water drinking to thermal rehabilitation treatments, hydro-massages, slimming and well-being programmes.

End of the 19th century and beginning of the 20th century was the time of the Belle Époque in Montecatini. Culture and art flourished and influenced the architectural style. Montecatini became a popular place to visit for renowned personalities. Today you can see the names of famous people who have visited the small town in the pavement of Viale Giuseppe Verdi when you do the Walk of Fame. 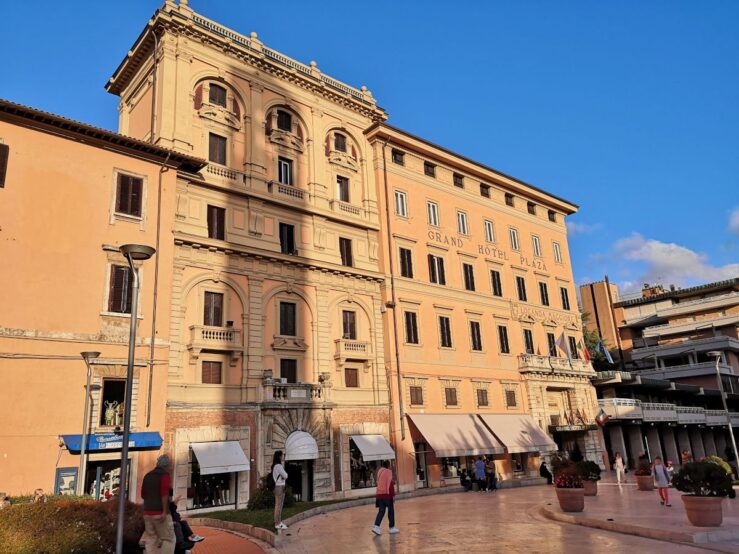 Gioacchino Rossini used to stay at the Locanda Maggiore (Gran Hotel Plaza) when he came to Montecatini for inspiration | Photo: Travel In Culture

The place has existed since the 13th century, but the Florentine architect Ugo Giovannozzi restored the buildings in the beginning of the 19th century. You will notice the lavishly decorated entrance with the Liberty overhang as well as the elaborate ceiling of the large hall together with many other architectural details. It has been named Temple of the European Thermal Energy! 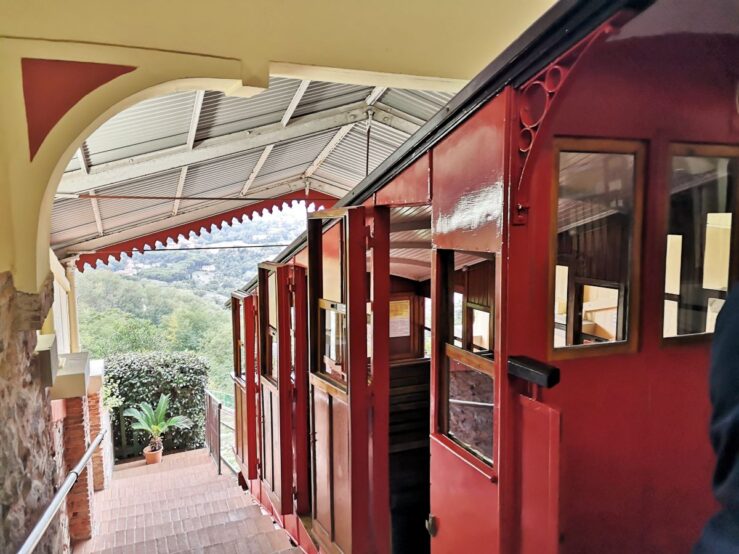 When you visit Montecatini, ascending to Montecatini Alto, way above the thermal Montecatini Terme, is just the icing of the cake. You take the small funicular, running since 1898, with a steep final climb to the summit of the mountain rising above the plain. The ascent allows for breathtaking views of the landscape with its solid olive trees, scattered orchards and pastel shaded rooftops. 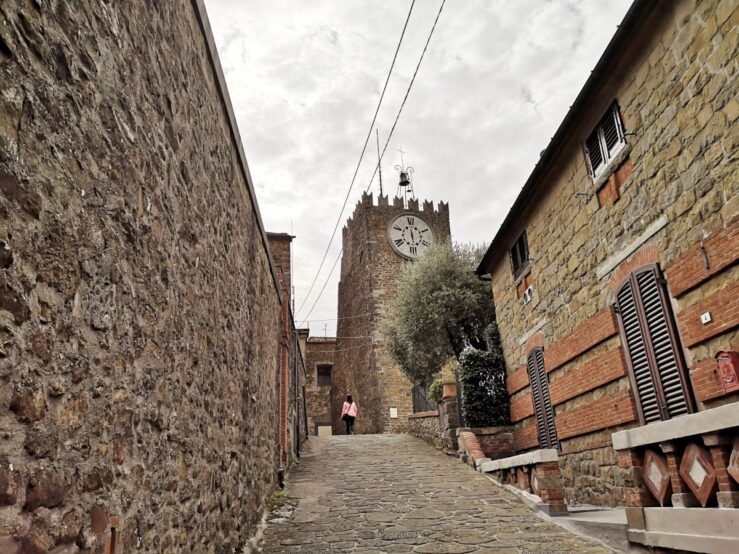 Montecatini Alto is the charming hilltop town accessible by a winding road or by the funicular running every half hour. The place was once a medieval castle, the Tramontana Castle, which you can see the remains of on one of the two hilltops overlooking beautiful Tuscan scenery. Other intriguing sites in Montecatini Alto include the church of St. Peter, the Bell Tower, the Clock Tower and the old Church of the Carmine.

The old medieval village features enticing narrow streets and a centrally located Piazza Giuseppe Giusti where people gather during the day in the small local restaurants and cafés. 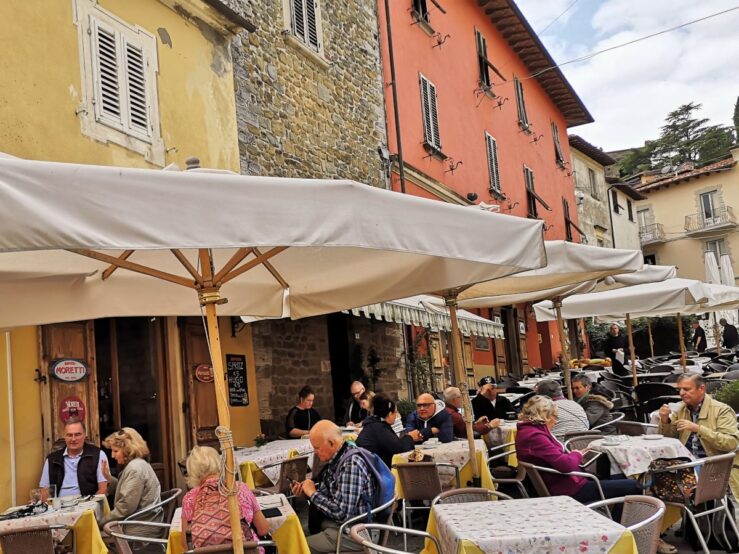 If you feel like hiking to the very top instead of taking the funicular, you can do a 3 hour roundtrip to Montecatini Alto. In Monticatini Terme, you will start out taking the path to the right of the funicular station. You may ask for a map at the tourist office.

Hotel Minerva Palace is located only a 5-minute walk from Montecatini’s main square, Piazza del Popolo. The hotel is set in a historic building, and it features a restaurant with a typical Tuscan cuisine.

Grand Hotel Plaza & Locanda Maggiore is located on the town’s main square, Piazza del Popolo. The hotel offers a gourmet restaurant, a well-kept garden and a swimming pool. All rooms are elegantly decorated.

Read more about day trips in Tuscany: San Gimignano – Who Built the Ancient Skyline in Italy? and Best Things to Do in Florence in 3 Days out!

Read next: 3 Tuscan Towns in a Day