↓
DENMARK  Moesgaard Museum is located between the scenic Aarhus Bay and the hilly forest. Ingeniously integrated into the green fields, it creates the perfect setting for open-air plays about the Danish Vikings and Viking kings. The Viking era is at such occasions brought alive here in the same landscape as when the Vikings settled in old Aros.
Ainnelise Niyvold Liundbye
This page has affiliate links (if you purchase through our links, we get a small commission at no extra cost to you - thank you!), see our Privacy Policy & Disclaimer.

Aarhus is one of the oldest cities in Denmark and Scandinavia. Its history goes all the way back to the 8th century when the first Vikings settled around Aarhus River. The old word ‘Aros’ meant river mouth and from this term the current name of the city, Aarhus, developed. To settle along the river was ideal for the Danish Vikings since they could keep their Viking ships well protected from enemies, tucked away from the coastline.

For centuries Aros was the location of a thriving Viking culture. What is pretty unique is that the geographical location of the old Aros has been preserved as the location of the present-day modern city centre. It is today a flourishing place where the numerous students, curious tourists and sociable citizens mix and take part in the vibrant cultural life at the river cafés and other trendy, local establishments. 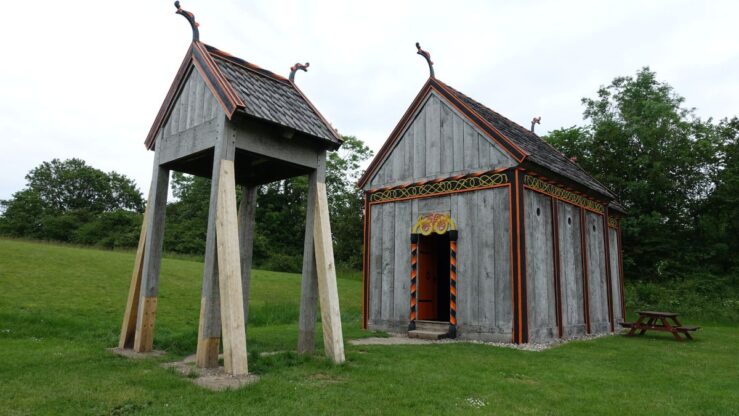 During the last decades significant excavations have been undertaken on several Aarhus squares and streets, stunningly revealing that the Viking settlements are actually older than earlier assumed. The first settlements are now believed to date all back to year 770.

Moesgaard Museum and the Viking Museum

The remparts and finds are exhibited at both Moesgaard Museum south of Aarhus and the Viking Museum situated in the basement of the Nordea Bank on the Skt. Clemens Square in central Aarhus. Recently, a Viking warrior has been excavated on a building site beneath the former main library in the city. It has been displayed in Moesgaard Museum in spring 2019 together with the permanent exhibition of runic stones and other Viking finds.

The Viking Museum Aarhus holds significant artifacts from the Viking Age, literally found on the square just outside. It exhibits remains of the ramparts from central Aarhus. At the same time the exhibition monitors an animation of a Viking attack taking place at the time of the old Aros. Also an exact model city of Aarhus (in year 980) under the reign of one of the Viking kings, Harold Bluetooth, is on display. 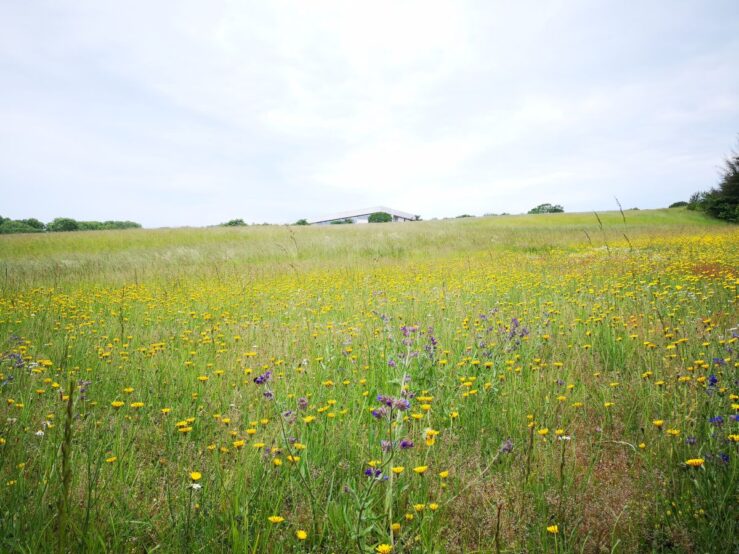 SOFS boutique hotel is a centrally located hotel, close to Den Gamle By, that has uniquely decorated rooms and a garden. The hotel offers an organic breakfast and an afternoon snack buffet with free hot drinks. Bicycle rental on site.

Throughout the years Aros also became a convenient base for the renowned Viking raids out of Denmark. The Viking kings were fearless and set out to conquer new lands. They reached many parts of Europe, in particular England and Ireland, in their search of wealth and power. On their way they raided monasteries to get their treasures. Wherever they arrived, the violent seafarers were brutal and reckless. To a large extent they defeated the people they encountered. Within long the Viking kings had conquered considerable land even far away from Denmark through their raids.

It is hard to believe that they Viking kings and their people were so relentless when you look at their peaceful descendants in the streets of Aarhus today. The city is a small, active and modern metropolis with a wealth of cultural activities, amiable people and a lively atmosphere. There are loads of popular restaurants and cafés along this same river, once chosen as the perfect site for the Aros Viking settlement. 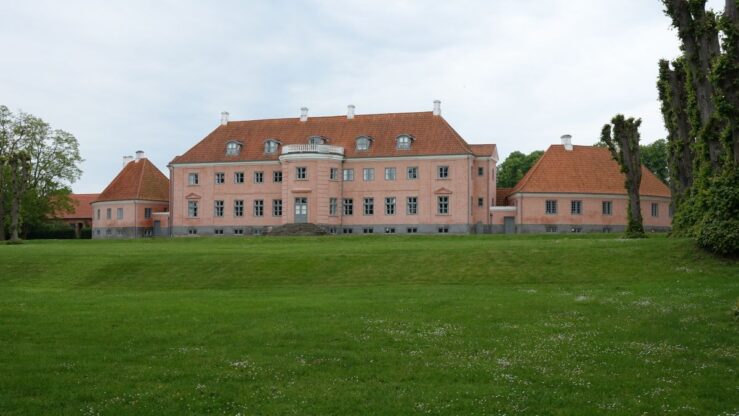 Moving further to the south, we reach the hilly Skåde Bakker and Moesgaard grounds where the old manor Moesgaard still stands.

It was in 1970 turned into a museum featuring the Danish history from the past by exhibiting Danish ethnological and archeological artifacts and finds from ancient times. In particular, it has a number of runic stones and bog bodies with the most famous one being the Grauballe Man.

Oldtidsstien is a 4-kilometer (2.5-mile) prehistoric trail across fields, meadows, Ice Age landscape, forest, streams and Moesgaard Beach, which has been established by the museum to take the visitors round to reconstructions from the past: prehistoric houses, dolmens and barrows as well as a Viking stave church ornamented with writhing serpents from around 1060, just at the transition to the Middle Ages. The medieval water mill, Skovmøllen at Giber Å, is still occasionally in use as a granary mill. Also an old fisherman’s house from 1856 is located just next to the beach. The beach itself is considered one of the prime Aarhus beaches and is a popular and favoured spot for the locals in summer. 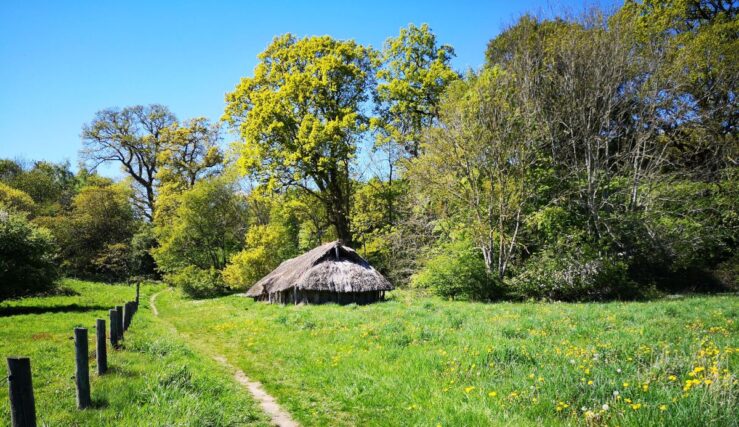 The prehistoric trail or Oldtidsstien passes by reconstructions of houses from the past | Photo: Travel In Culture

In 2013 the Moesgaard Museum was moved to an architectonically very interesting new museum building – literally dug into the meadows of the old Moesgaard premises. It was designed by the Danish Henning Larsen Architects, supplied by Kristine Jensens Tegnestue for the landscape architecture and constructed by MT Højgaard. The roof is a grass lawn rising from the meadows until the tall far end of the fascinating construction. The museum is today more popular than ever, hosting numerous popular, temporary exhibitions from near and far. Its exterior frames are perfect for private get-togethers and picnics on the sloping, green rooftop, for sledging in winter, for a refreshing spring Sunday walk along Oldtidsstien or as a trendy setting for a professional photo shoot. 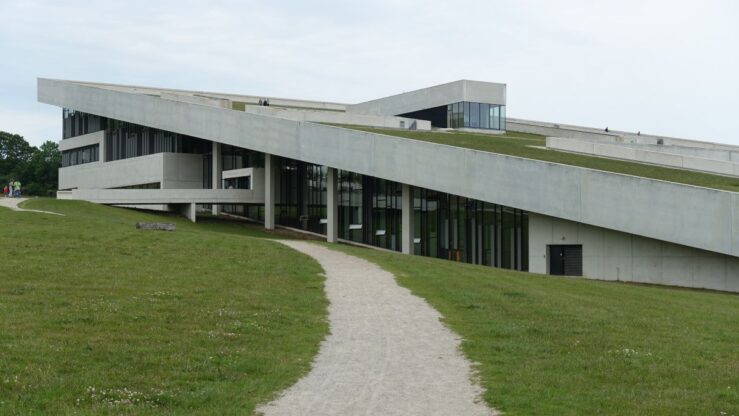 The new Moesgaard Museum rising from the green lawns | Photo: Travel In Culture

The Danish Vikings and the Viking kings

The forests and the meadows in southern Aarhus are also in present-day Denmark a central location for the original Danish Viking kings and history. In 2017 Copenhagen Royal Theatre performed an open-air Viking play with the Viking king Harald Bluetooth in a main role. The setting was the Moesgaard Museum surroundings, exploiting the special architectonical frames of the modern museum literally built into the green field. Shaped with an old Danish Viking ship as the stage and a universe of characters from the Viking age, it brought alive the Danish Vikings and Viking kings. The setting drew up an atmosphere of rough Viking raids and heroic sword battles, leaving the spectators with an enveloping sense of coarse Viking humour, as it once must have been.

Again during spring and early summer 2019 another myth came alive in these same surroundings. The play King Arthur dramatically played out with a dragon, a wizard, queens, warriors and horses as well as spectacular magic in the Moesgaard open-air setting. In 2022 it is Tokien’s magical The Hobbit that takes place! 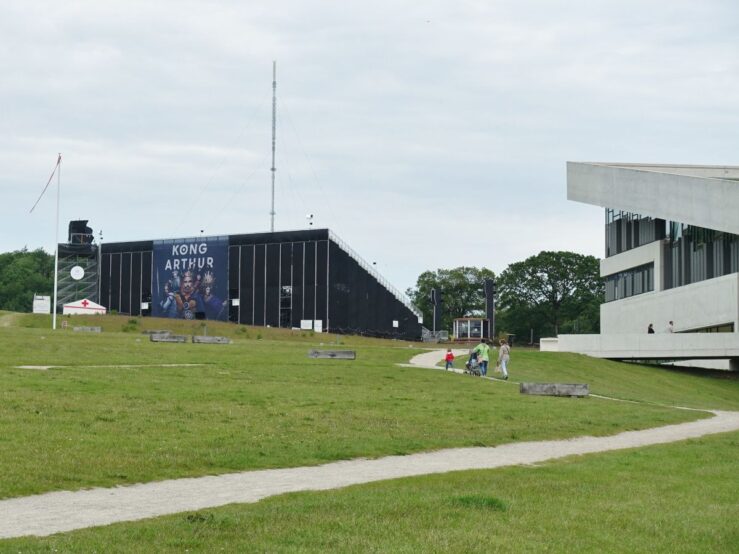 The premises of the former Moesgaard manor and surrounding landscape, though, hide far more history than just the Viking period. Already in the Stone Age there were settlements in the area, and they continued up through the Bronze Age and Iron Age as well as the centuries to follow. There are visible traces from all the periods everywhere around Moesgaard: grave mounds, dolmens, sunken roads and drystone walls. Several of the walls date all back to Medieval times. Also the 1700s straight line structures have influenced the landscape with still existing charming allees as access roads.

From more recent times one of the more interesting local sights is the remains of an ice cellar from the 18th century in the forest. Here Moesgaard used to keep ice cut from nearby ponds in winter. In this way the manor got its own fridge in the forest where they could store food for many months during the year. 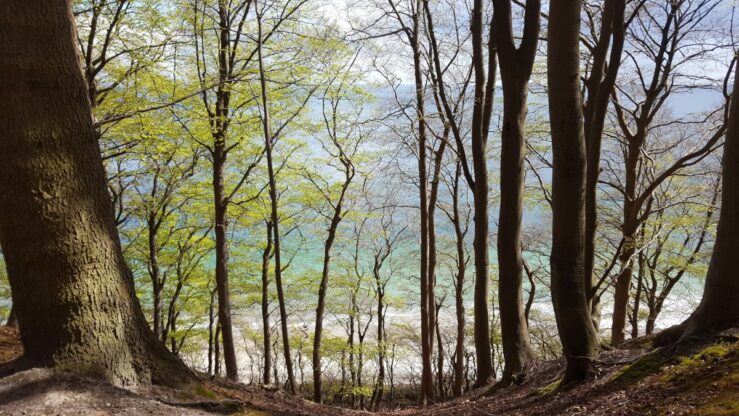 Occasionally, at other times of the year, you can also on a normal day come across people participating in a Viking role play around the Moesgaard Museum and forest. It is obviously a favoured location for modern role playing. The area around the museum is with its amazing nature, hills, forest and beach among the most popular places around Aarhus.

Moreover, each summer Moesgaard is in particular packed with modern Danish Vikings for a few days. The Moesgaard Viking Moot is an annual event, taking place since 1977, around the museum premises. In July Vikings from all over the world gather to participate in a gigantic battle of 500 warriors. The place abounds with Icelandic horses, Vikings dressed in convincing Viking costumes, merchants with authentic Viking crafts, jewellery, ceramics, beer, leatherwork etc. It is a most lively, enticing show and impressive battle when the Viking Age comes alive on the flower meadows and in the Moesgaard forest for this special occasion every year.

Read more about Aarhus: 9 Cultural Spots in Aarhus and Sightseeing in the Heart of Jutland

Read next: Visit Dybbøl Mill and Medieval Ribe at the Danish Wadden Sea 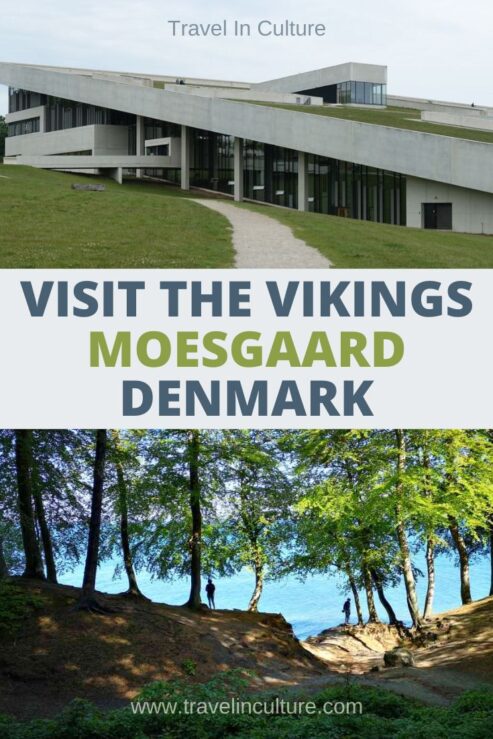 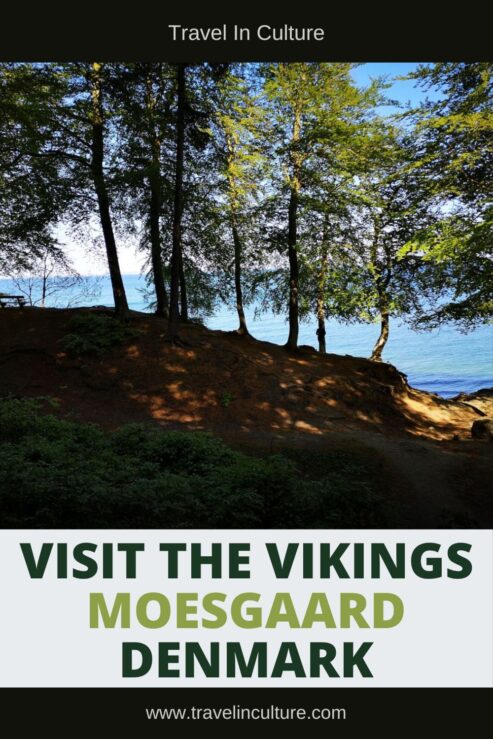