↓
DENMARK  Annual tilting-at-the-ring games, impressive Royal palaces, important battles, countryside idyll… The southeastern corner of Jutland has an extensive and fascinating history and seethes with Danish landmarks, symbols, 1864 war history, as well as Royal traditions.
Ainnelise Niyvold Liundbye
This page has affiliate links (if you purchase through our links, we get a small commission at no extra cost to you - thank you!), see our Privacy Policy & Disclaimer.
Table of Contents

-> Where to stay in Southern Denmark

A Danish tradition, tilting at the ring, also known as ‘ringridning’ in Danish, is a popular sporting event here in Southern Jutland. This regional discipline is with its annual tournaments a traditional part of the summer festivals in this corner of Denmark – which also features the iconic Dybbøl Mill, or Dybbøl Mølle. 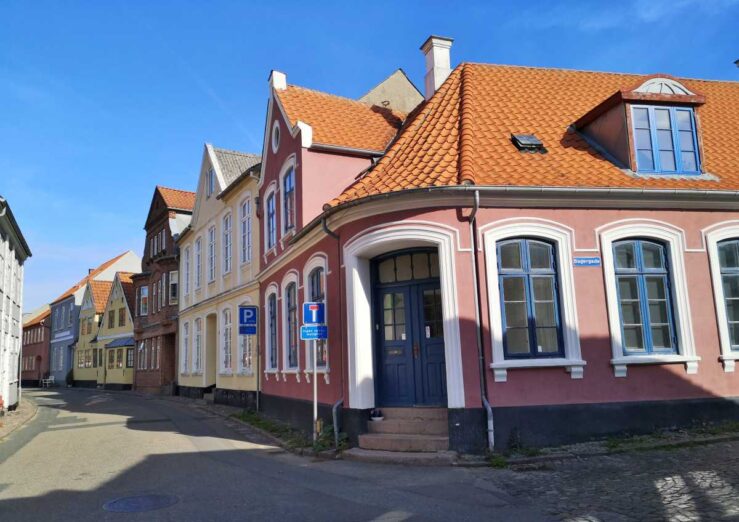 As the capital of Als, the easternmost island in Southern Jutland, Sønderborg is a Danish town in a maritime setting along Flensburg Fjord – the surroundings creating a unique atmosphere here. It is a charming town with little alleyways of traditional century-old houses, a rich cultural life and the most amazing harbour view!

Where to stay in Southern Jutland
Advertisement
Hotel Sønderborg Kaserne
3-star hotel from 1907 in Sønderborg near Sønderborg Beach. The hotel features family rooms & river views – and is situated only 45 km from Flensburg Harbour.

Hotel Bella Italia excellent location close to Sønderborg Castle in Sønderborg and only 2.5 km away from Dybbøl Mølle. There is an on-site restaurant and free private parking.

Rønhave refurbished 19th-century farmhouse with roots back to 1315. The property features a lush garden and views of the surrounding countryside.

The waterfront is actually a good place to begin if you want a convenient location to take in all impressions, and it is only a short walk from the idyllic streets boasting traditional Danish town houses.

At the waterfront you will soon spot the old castle, Sønderborg Castle, a rather solid square construction. At the time of construction it was strategically placed to be able to observe who approached Sønderborg from the seaside. 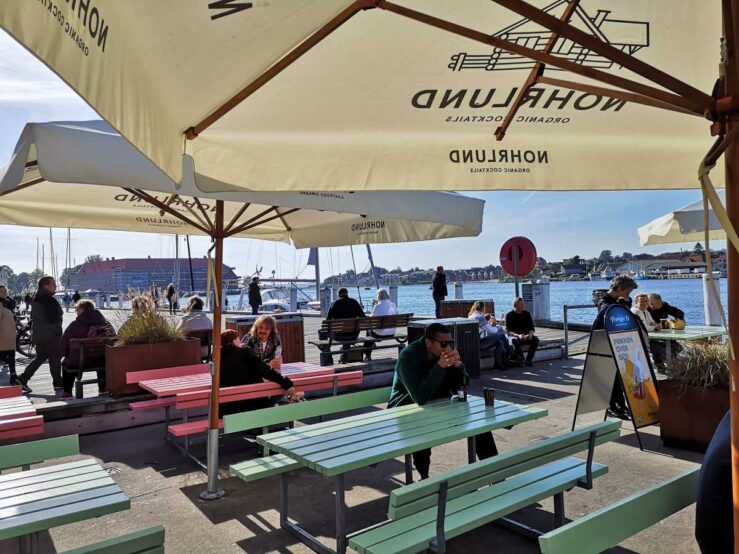 Sønderborg’s waterfront is a vibrant place. Sønderborg Castle can be spotted in the background | Photo: Travel In Culture

Sønderborg definitely has its own share of Danish Royal history. It was namely in Sønderborg Castle that a Royal prisoner sat. From 1532 to 1549 King Christian II was kept here behind the thick walls, and according to several sources he (and other prisoners throughout the years) ‘drilled’ a groove with his thumb all round the edge of the prison table. When strolling along the waterfront, take a look at the table sculpture clearly showing the groove! 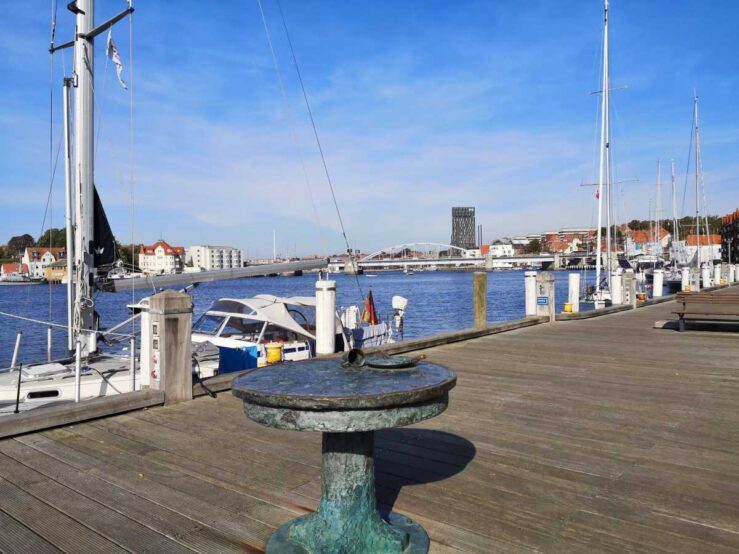 Sculpture of King Christian II’s prison table which he endlessly walked around at Sønderborg Castle – creating the famous groove | Photo: Travel In Culture

Sønderborg Castle is today a regional museum introducing the visitors to the Schleswig Wars, the Reunification and other significant history, culture and art with importance in Southern Jutland. Discover the beautiful Renaissance church from 1570, as well as the Knights’ Hall.

Along the waterfront you can enjoy panoramic views of the city, the boat traffic, Sønderborg Castle – and even the renowned Dybbøl Mill (‘Dybbøl Mølle’) atop a hill at Dybbøl Banke, a few kilometres away.

Inspiration for Denmark trip: Discover Ribe at the Wadden Sea and Road trip across the southern islands and Ærø – island hopping and Discover H.C.Andersen in Odense
2. Dybbøl Mill 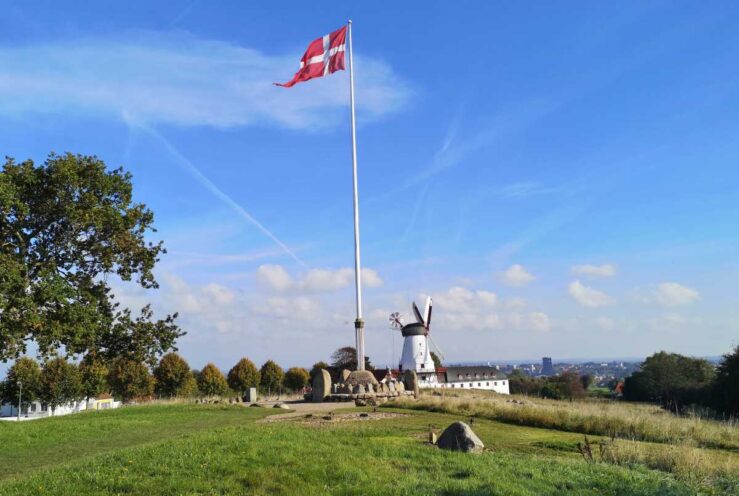 The first mill was erected at Dybbøl in 1744. It was the first mill out of several mills at Dybbøl due to a number of fire incidents in the following centuries where devasting fires more than once burned down the solid mill constructions, most recently in 1935. Nevertheless, the mill was each time reconstructed in the same place overlooking the surrounding scenic landscape.

In 1848, when the First Schleswig War, or the Three-Year War, broke out, the Danish army organised an observation post right here. During the following year Dybbøl Mill was involved in an extensive battle between Danish and German troops, and it unfortunately resulted in the mill burning down. 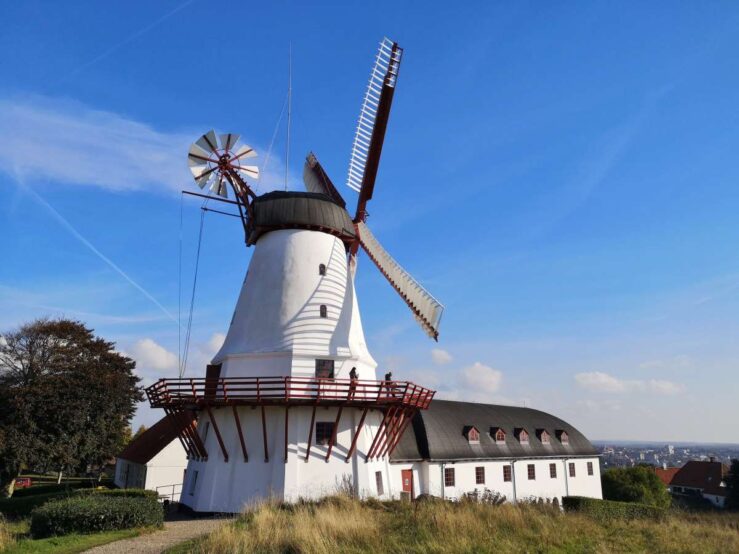 Again in 1864, Dybbøl and the new Dutch-style windmill ended up as the focal point in the Second Schleswig War after the Danish army had been defeated at Dannevirke further south. At Dybbøl the Danish soldiers now tried to fight against and resist the Prussian wave of bombings. On 15th March the mill was severely struck in a bombing, and the mill partly collapsed.

A month later, on 18th April, Dybbøl was stormed and a considerable number of Danish soldiers lost their lives. With this final defeat Denmark had now lost the Duchies of Schleswig, Holstein and Lauenburg.

Once again, Dybbøl Mill was rebuilt, and Germany celebrated their victory by raising a large monument, Dybbøl Memorial, or Düppel Denkmal, atop the hill at Dybbøl Banke in 1872. The monument survived until 1945 when it was quite destroyed by Danish freedom fighters. Today only modest remains of the memorial are left in the area. 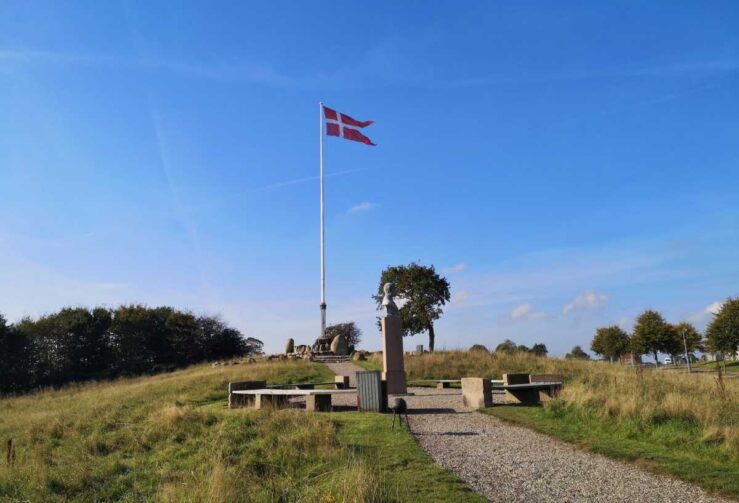 In 1914 Germany celebrated the 50-year anniversary of their final victory here at the King’s Redoubt. Anyway, soon hereafter – at the end of World War I – the land became Danish again when the Danish-German border in 1920 was moved from Kongeåen further up north, resulting in the ‘Reunification’ at Dybbøl Banke with participation of 50,000 people, the Danish King Christian X included.

Still today there are annual celebrations and commemorations at Dybbøl, and the iconic Dybbøl Mill continues to be a symbol of Denmark and the Reunification. 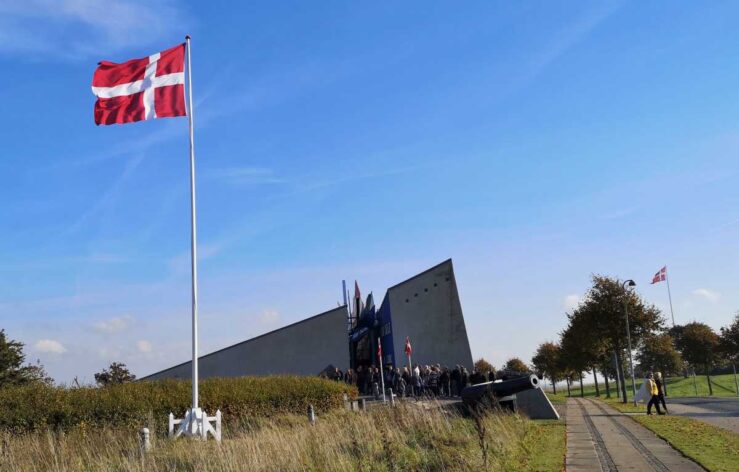 Near Dybbøl Mill at Dybbøl Banke, the History Centre Dybbøl Banke (Historiecenter Dybbøl Banke) is a site where you can step directly into the War of 1864 and the other battles sweeping across Dybbøl Banke more than a hundred years ago.

Inside the soldiers’ town you will get the chance to explore the nearly authentic soldiers’ barracks and to hear the cannon balls being fired in the museum area featuring a highly spectacular museum building. The remarkable structure was designed by the architects Ernst Lohse and Michael Freddie, and it rises as a unique building in the landscape.

Wrapped in explicit war symbols, and with all its odd angles and uneven surfaces full of details relating to the war and arms being used, it appears as a building veritably sinking into a chaotic battlefield. This is in stark contrast to the peaceful Dybbøl Mill just a stone’s throw away. A visit here is unquestionably a way to relive the Battle of 1864! 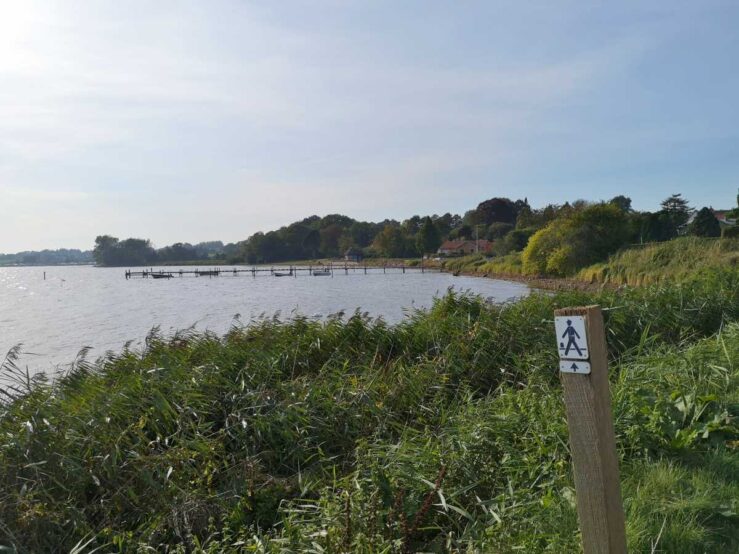 Als and Broagerland, two regions on each their side of Sønderborg, are both areas of scenic beauty and with great hiking options.

Now that you are close to the German border as defined by Flensburg Fjord, you may enjoy an excellent hike in the Danish/German borderlands along the old Gendarme Path (Gendarmstien).

The historic Gendarme Path has in fact been declared a ‘quality trail’ ensuring nature hiking in a varied landscape consisting of woodlands, bogs, meadows and coastal areas, as well as it provides surprising, panoramic views and interesting cultural sights along the way.

The track used to be the ‘line’ where the Danish officers (‘gendarmes’) were patrolling regularly to guarantee that no illegal activity was undertaken between the two countries and that no smugglers were operating during the day or during the night hours.

The Gendarme Path stretches all 84 km past Padborg, Gråsten, Dybbøl, Sønderborg and Høruphav, and it was being used by the border gendarmes from its establishment in 1839 right until 1958! 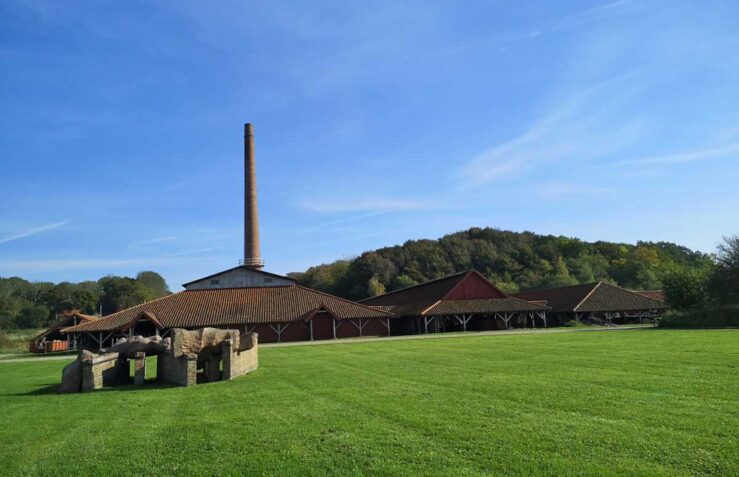 Along the trail you will find another interesting site. Cathrinesminde Brickworks (Cathrinesminde Teglværk) is one of the former brickworks in this part of the country, today a museum and an industrial heritage site.

The brickworks was established by a local farmer in 1732, and part of the bricks produced here were used to rebuild the houses in the Danish capital after the Fire of Copenhagen of 1728. The brickyard remained in operation until 1968. Today, it is a unique place to learn about the old bricks industry. 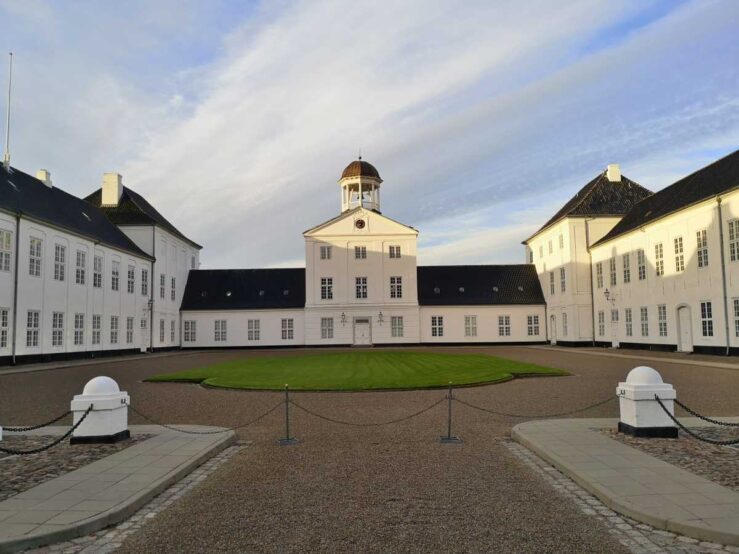 Gråsten Palace is known as the Royal family’s summer residence.

Originally, in the 16th century, the Palace was erected as a hunting and leisure site, but it unfortunately burned down as early as in 1757 – after it had been converted to a baroque palace by Chancellor Frederik Ahlefeldt. After the fire a new palace construction replaced the original complex. 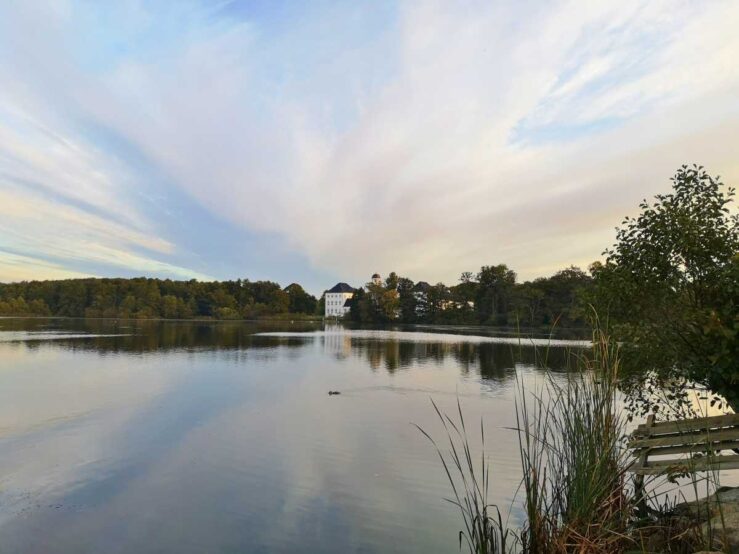 In recent times, Gråsten Palace has been the late King Frederik and Queen Ingrid’s property, and she organised a lovely flower garden there. After his, and later her death in 2000, it has been used by Queen Margrethe, her husband Henrik and the younger generation of the Royal family. 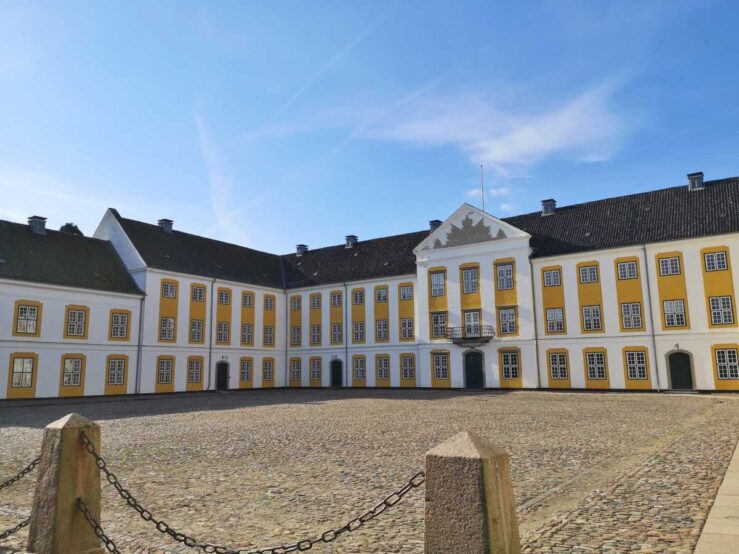 On the Als side of Sønderborg you will arrive at Augustenborg, a small town featuring one of the most impressive baroque palaces in Denmark – definitely worth a visit although there is no access to the interior of the castle.

Back in time the famous Danish author Hans Christian Andersen visited the place – and maybe found inspiration here for one of his fairy tales. Later, it served for a number of years as a psychiatric hospital.

Read next: Visit the Skagen Painters and Climb the Cliffs of Møn 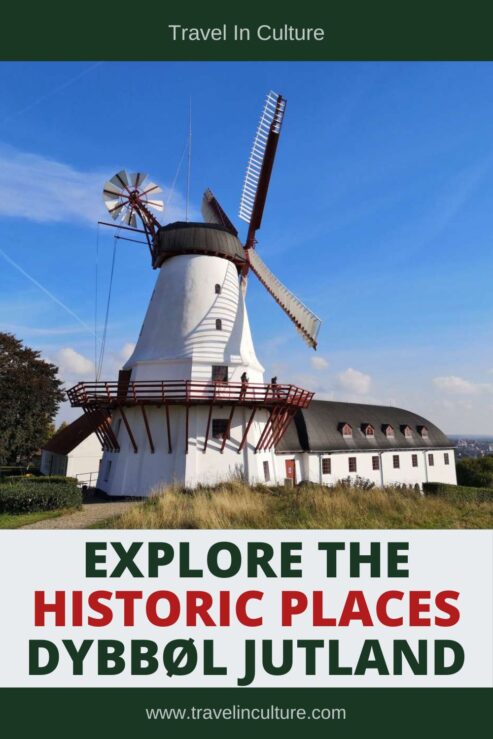