↓
Europe » Denmark » On the Trail of Hans Christian Andersen in Odense 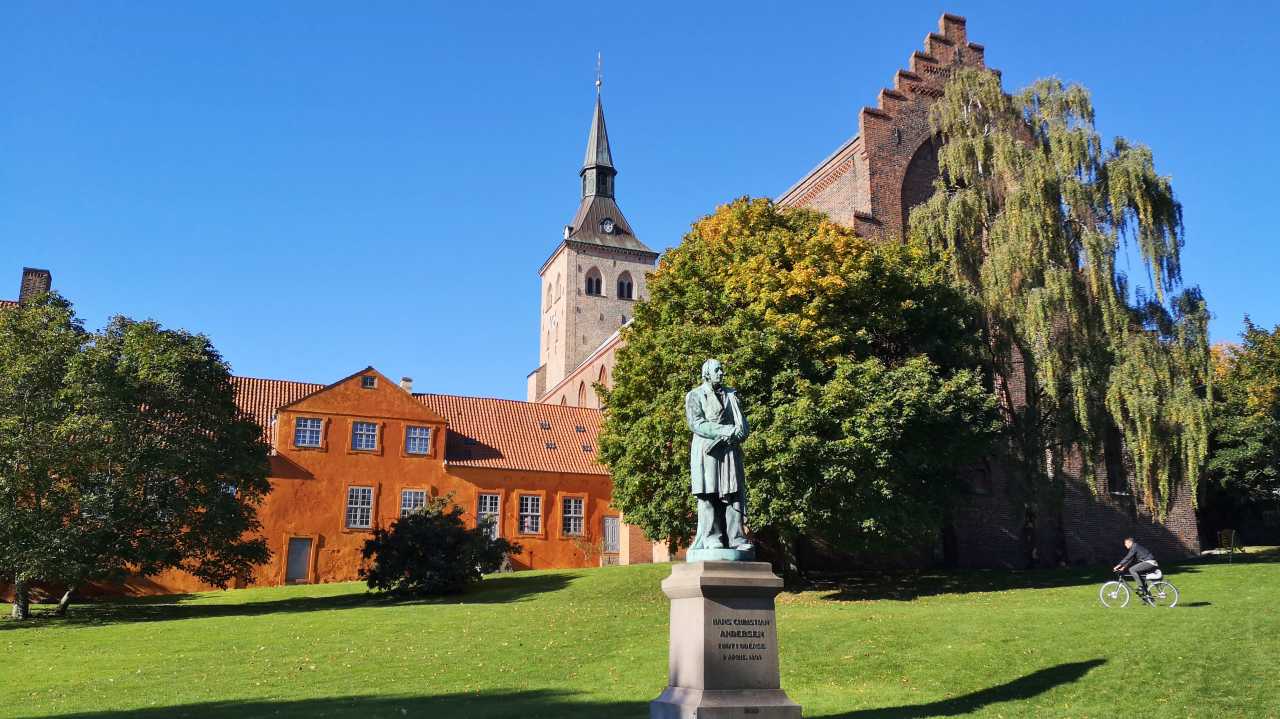 On the Trail of Hans Christian Andersen in Odense

DENMARK  Hans Christian Andersen, the world-famous Danish novel and fairy tale writer, was born in Odense in Funen. A self-guided tour will take you round in Odense to discover his childhood places, as well as his fairy-tale characters who come alive in the form of symbolic statues which literally dot the city.
Ainnelise Niyvold Liundbye
This page has affiliate links (if you purchase through our links, we get a small commission at no extra cost to you - thank you!), see our Privacy Policy & Disclaimer.

Odense features as one of its top assets the Danish fairy tale writer Hans Christian Andersen who was born here on April 2 1805. His birthplace in Hans Jensens Stræde is open for visits – and is since summer 2021 integrated into a brand new museum revealing aspects and telling the life of the famous author in an inspiring way – through his own eyes! 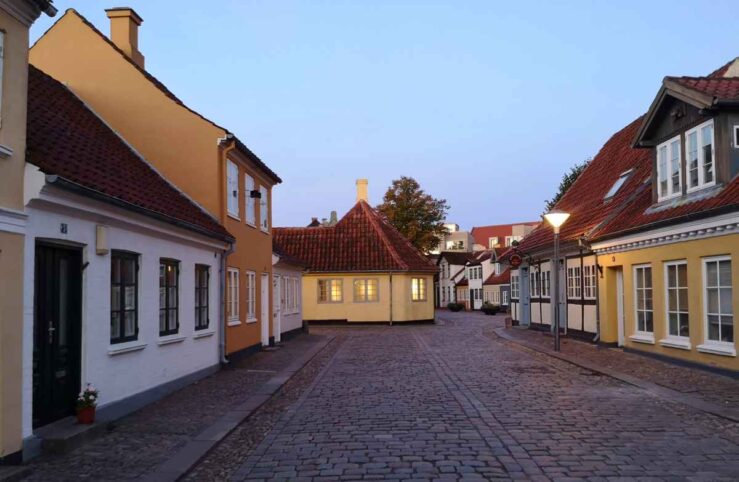 When Hans Christian Andersen was two years old, his family moved to Munkemøllestræde where they lived from 1807 until 1819. Also this house can still be located in the city. It was here the boy Hans Christian lived when he at the age of 11 lost his father.

Since his early childhood he had been interested in stories… and despite his mother trying to secure his future through apprenticeships within both weaving, as a tailor and even in the tobacco business, he wanted to pursue his career in a more imaginary and artistic field.

At the age of 14 he then decided to leave his hometown to look for opportunities in Copenhagen. Here he tried both singing and ballet, but it was not until Chancellor Jonas Collins, director of the Royal Theatre in Copenhagen, discovered him that he was pointed in the right direction. He received funds from King Frederik V to go to school and further develop his writing talent. Assisted by a private tutor, he now succeeded in passing the entrance exam to the University of Copenhagen. 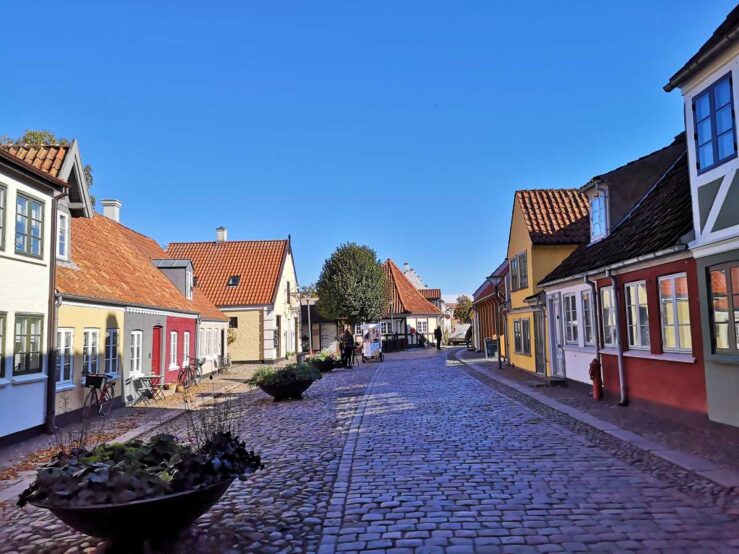 Go for a stroll around the picturesque old cobbled streets in the city | Photo: Travel In Culture

From here his writing career took off – and along with undertaking journeys in Europe, he wrote and published his stories. Travelling was an important part of his career and gave him profound inspiration to his novels and fairy tales. His motto was – not without reason: To travel is to live!

It was a life task for him to write stories that appealed to both adults and children. Despite writing for children, he never got any children of his own – and he never married. 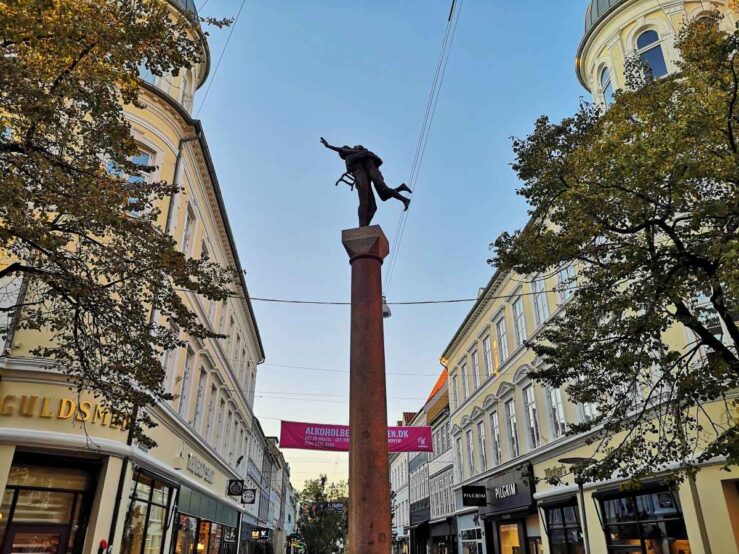 The Shepherdess and Chimney Sweep | Photo: Travel In Culture

Some of his best known – and worldwide translated fairy tales are The Swineherd, The Nightingale, The Shepherdess and Chimney Sweep, The Steadfast Tin Soldier, The Princess on the Pea, Little Claus and Store Claus – and there are ‘countless’ more (probably 168 in all)!

Hans Christian Andersen House is the brand new fairy tale museum in Odense where you will step into his fairy-tale universes and experience the magical worlds from the writer’s angle. The museum is located in Odense’s historic neighbourhood. 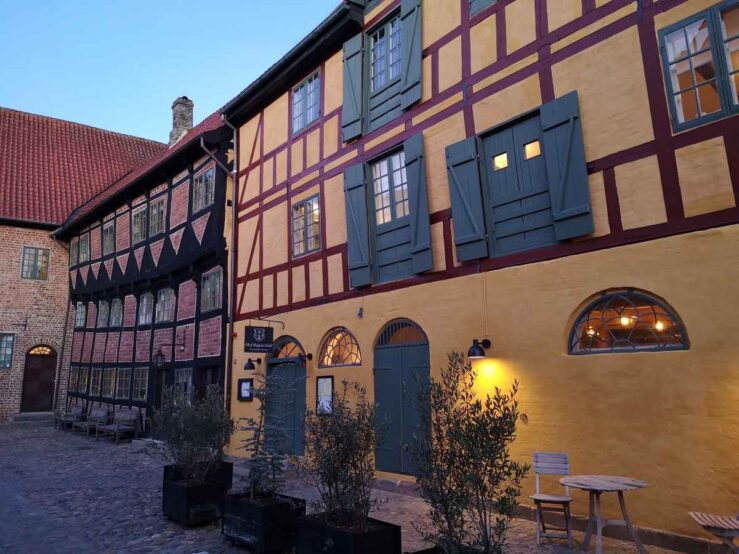 Oluf Bager’s original house dating from 1586 can be found at Nørregade 29 | Photo: Travel In Culture

As a natural feature the museum includes a children’s cultural centre – what could be more natural in a Hans Christian Andersen world?

In addition to the underground museum, designed by the renowned Japanese architect Kengo Kuma, there is surrounding outdoor space in the form of a lovely magical garden.

Hans Christian Andersen’s birthplace is of course still preserved and is now a cornerstone of the museum. 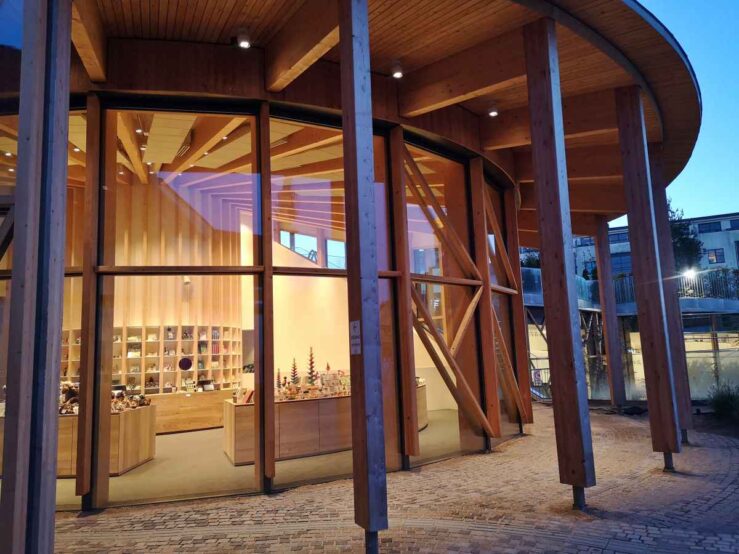 Hans Christian Andersen’s universe is not just limited to the museum. All over the city you can trace Hans Christian and his remarkable fairy-tale characters conceived in his authorship. You can guide yourself or take a fascinating tour of Odense coming across statues, monuments and other relevant sites.

An itinerary which will take you to both the Hans Christian Andersen related sights in Odense and past some of the other top attractions in the city can easily be covered on a 2-3-hour self-guided walk through the city. 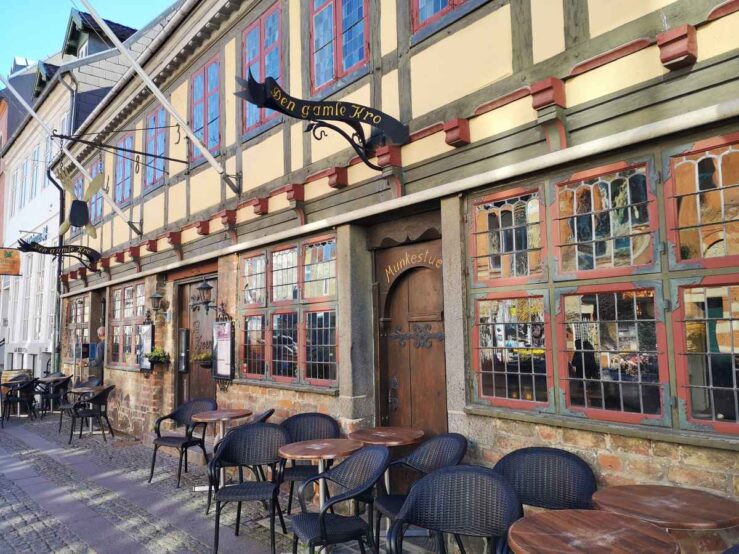 From the railway station you will step out in the city park, Kongens Have (The Royal Gardens), which leads right up to Odense Slot (Odense Palace), a 15th-century monastery, as well as Odense Theatre, and which is also just a stone’s throw from Odense Cathedral School. 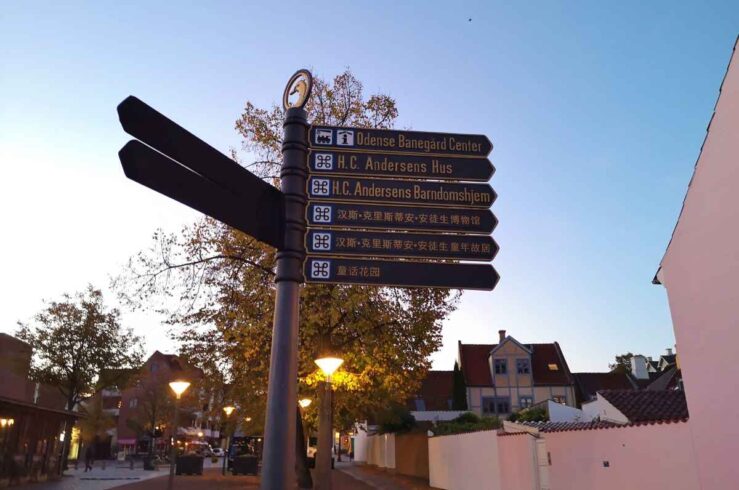 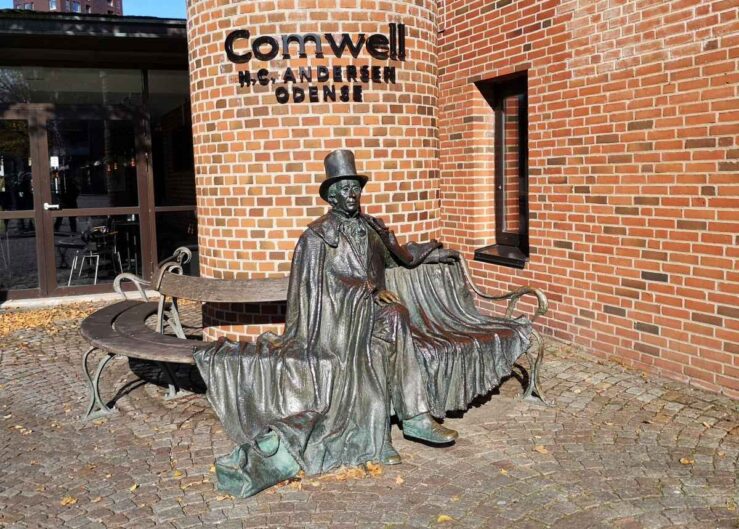 The famous author resting on a bench in front of Comwell H.C.Andersen | Photo: Travel In Culture

In the street between Hotel Odeon, passing the Concert Hall, and Comwell H.C.Andersen, you will already find a couple of statues of interest. One of the author himself sitting on a bench – which will give you the opportunity to sit down ‘chatting’ with him – and one of the sculpture Thumbelina emerging from his fairy tale of the same name. 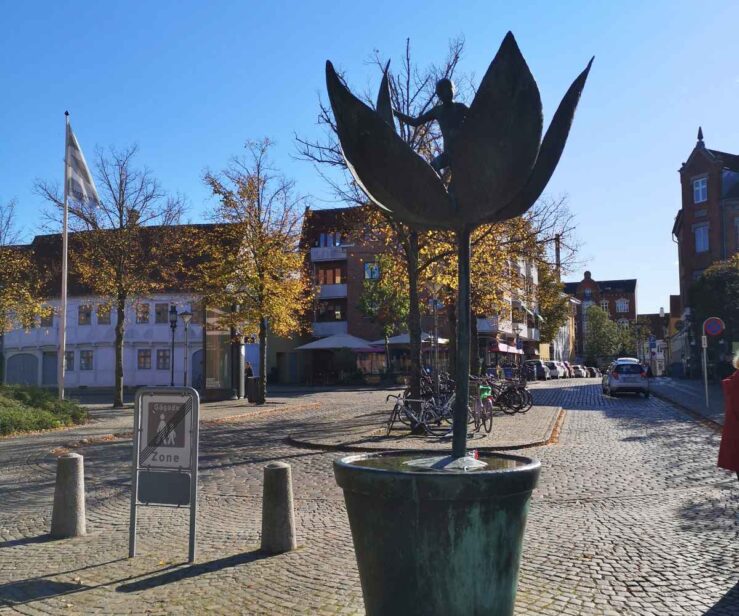 A few hundred metres from here you will discover Møntergården at Overgade. It is Odense’s cultural museum featuring amazing historic half-timbered houses in the small courtyard. Originally dating from 1646, the building was constructed as a farmhouse – although in the end being used by noble families. The farm buildings were in the 18th century converted into a grocery store with adjoining storage room. It is today a museum for Odense in the Middle Ages as well as in the Renaissance period. 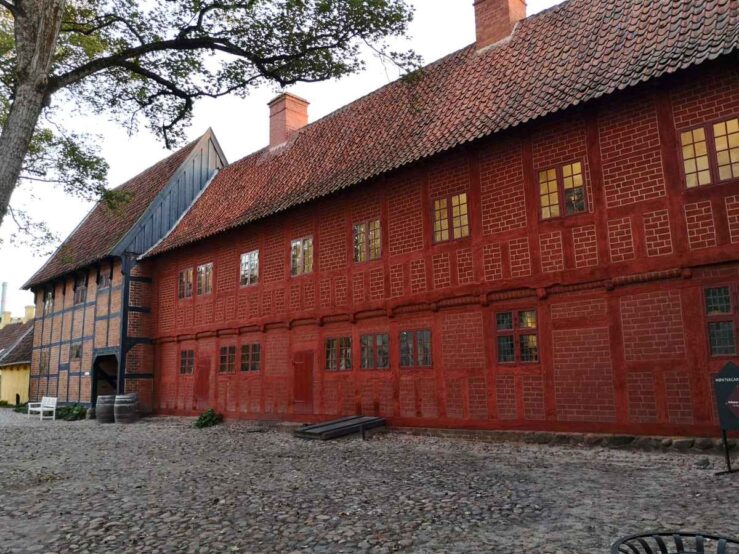 The historic house Møntergården is today a museum for Odense’s past | Photo: Travel In Culture

Continuing along the streets in a southerly direction, you will now find yourself in the very city centre with all its shops, restaurants and vibrant café life. When you least expect it, you will catch sight of a statue belonging to one of Hans Christian Andersen’s fairy tales.

Across the city you will notice statues of The Shadow, The Travelling Companion, The Improvisatore, The Mermaid, The Emperor’s New Clothes, The Woman with the Eggs, The Flying Trunk … and many more.

On a corner at Overgade you will spot the Steadfast Tin Soldier, and at another site the Shepherdess and Chimney Sweep – constantly reminding you of the little boy who grew up in Odense and achieved success and world-fame for his extraordinarily unique stories. 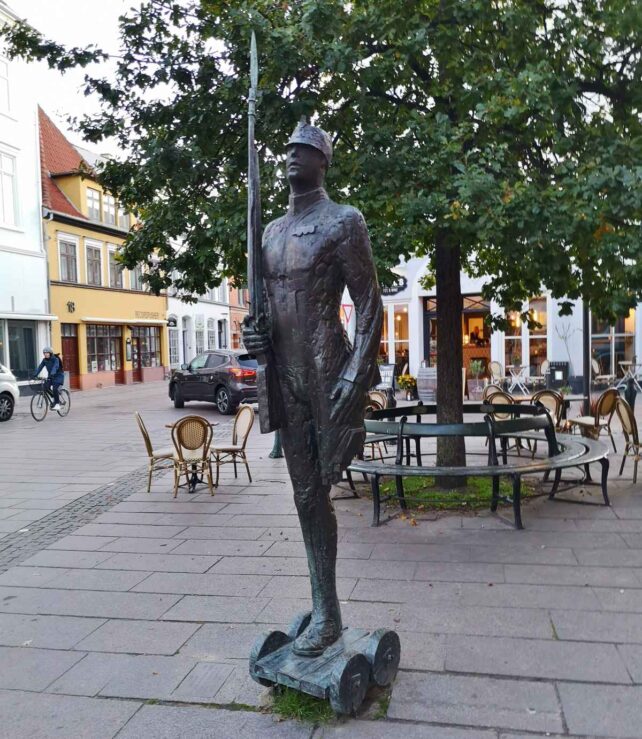 Sankt Knuds Kirke (Saint Canute’s Cathedral) is one of the most impressive church constructions in Odense, and probably the finest Gothic church in Denmark. The Cathedral is named after the Danish king Canute the Saint (Knud den Hellige) who was murdered here in 1086. His remains are still today kept in the crypt.

Between the Cathedral and the river Odense Å you just cannot miss the statue of Hans Christian Andersen which has got a top location on the lawns in front of the Cathedral. 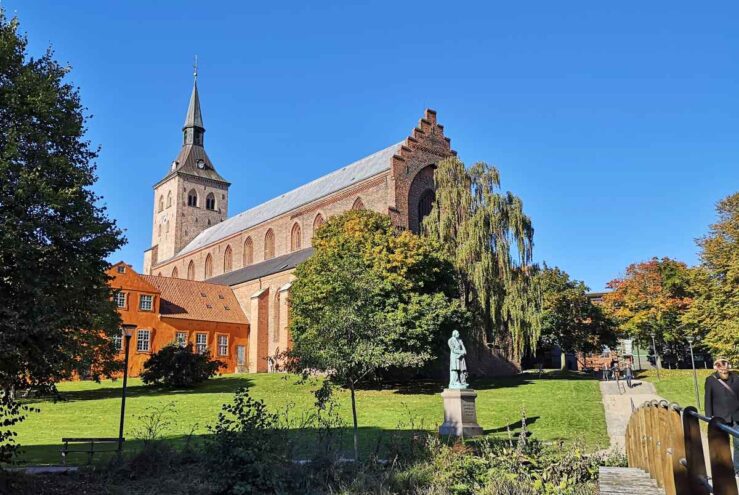 A statue of the famous writer can be found in front of Sankt Knuds Kirke (Saint Canute’s Cathedral) | Photo: Travel In Culture

You are now close to Odense City Hall, an outstanding building from 1885, designed in a historicist style, and obviously inspired by the Palazzo Publico in Siena. Comprehensive restoration works were undertaken in 2005, marking the 200th birthday of Hans Christian Andersen. 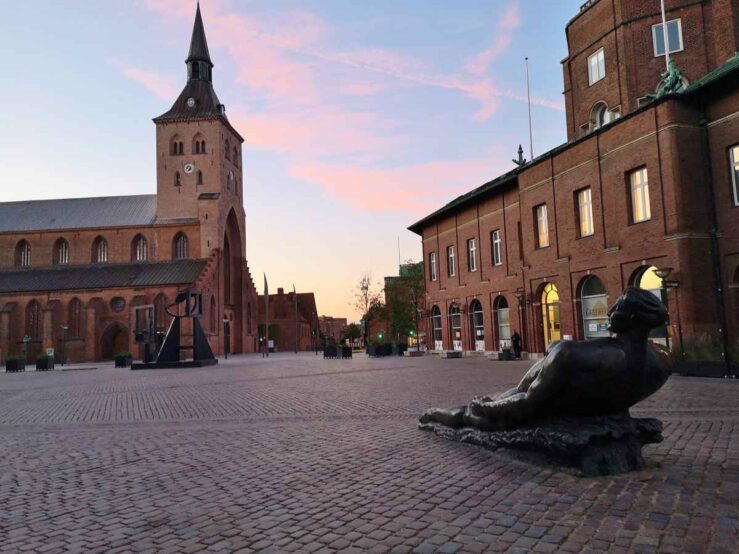 The remarkable sculpture Oceania has a central location in the square in front of the City Hall | Photo: Travel In Culture

An enormous sculpture, Oceania, adorns the square, Flakhaven, in front of the city hall. She is Svend Wiig Hansen’s masterpiece of a sea goddess, received as a gift from The Odense City Art Foundation in 1992.

From here you will make your way past Andersen’s childhood home in Munkemøllestræde where he lived 1807-1819. 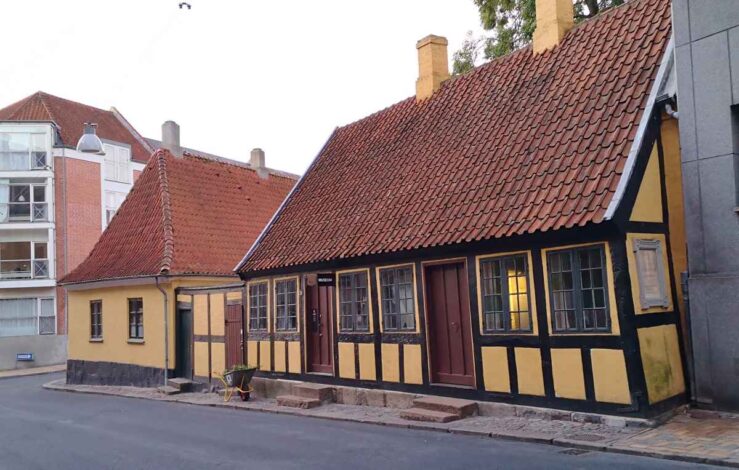 Set as an island in the middle of the river, Eventyrhaven (Odense’s Fairy Tale Garden) can easily be accessed. It is a small idyllic rotunda and pergola garden from 1876 which of course also features its own statue of Hans Christian Andersen – among several other statues. In the river you will discover one of the symbols from Hans Christian Andersen’s fairy tale The Steadfast Tin Soldier, namely Papirbåden (the Paper Boat). 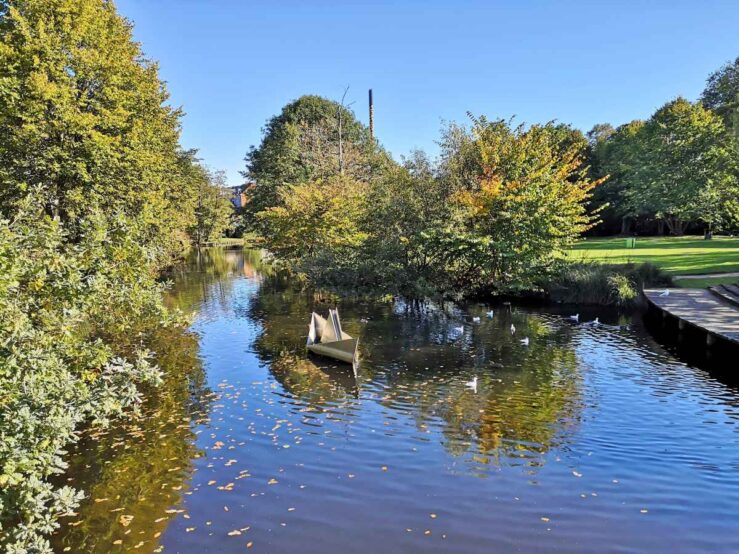 At Filosofgangen and Munke Mose Park you will reach more Hans Christian Andersen sculptures. The fabled Sea Horse sculpture, a wild sea horse with a mermaid on its back, meets you just where you cross the river to Munke Mose. Here you will also find The Wild Swans, symbolizing the 11 children who were turned into swans by the wicked queen. 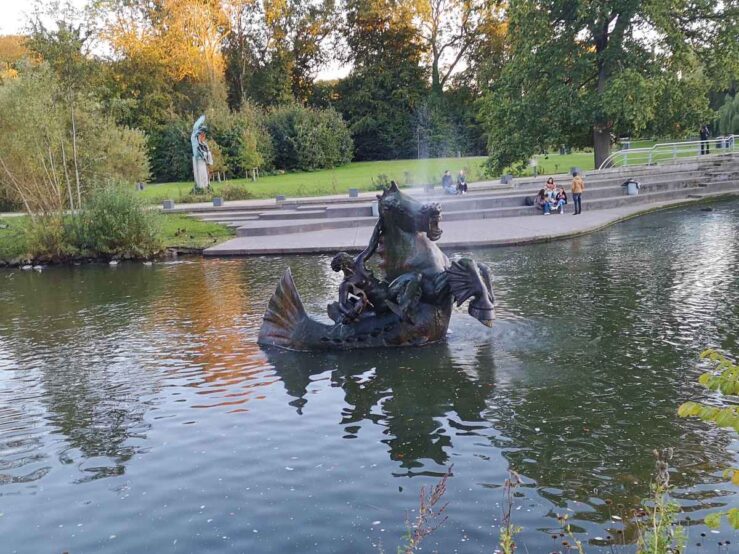 Planning your itinerary through Odense thoroughly, you will really be able to ‘cover’ a lot of his most famous fairy tales with their main characters and symbols!

At the same time Odense is a lovely city to spend a couple of days in – and it is great to chill in the city parks and enjoy the culture and vibe of students, curious visitors and other more permanent residents. 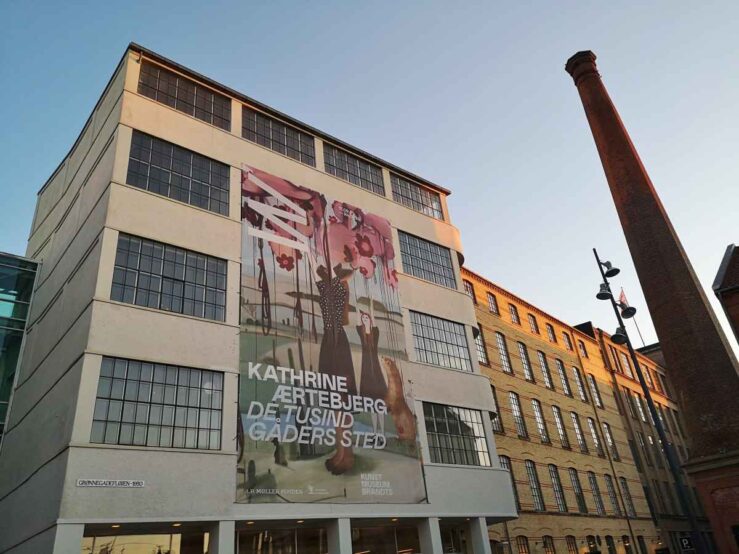 Brandts Klædefabrik used to be a textile factory | Photo: Travel In Culture

The building is today a unique cultural centre seething with atmosphere with artwork from all over the world. It doesn’t come as a surprise that it used to be a textile factory, and it is still very authentic!

Do you need inspiration for 3 days in Copenhagen? Find it here: Copenhagen 3-Day Itinerary

Travel Insurance
Have you considered what you will do in the (unlikely) event of something unforeseen happening? Do you need a travel insurance? Click here to get a quote and buy your travel insurance.

Visa
Have you checked if you need a visa for your trip? Click here to check and apply for a visa.

‘On the Trail of Hans Christian Andersen in Odense’!

On the Trail of Hans Christian Andersen in Odense: