↓
DENMARK  70 million years ago the foundation of the awe-inspiring white cliffs of Møn – Møns Klint was laid. The spectacular cliffs rise 128 metres above the turquoise sea and the fossil beach below telling their own story of Denmark’s past.
Ainnelise Niyvold Liundbye
This page has affiliate links (if you purchase through our links, we get a small commission at no extra cost to you - thank you!), see our Privacy Policy & Disclaimer.

Møns Klint (Mons Klint – or Moens Klint – originating from the old Danish word ‘mo’ meaning chalk) is the spectacular range of white cliffs along the Danish island Møn (Mon / Moen), located in the southeastern corner of Denmark at the Baltic Sea – it is less than a 2-hour drive from Copenhagen to the Cliffs of Møn. Here you will find a number of outstanding walking routes which will allow you to explore the astonishing terrain and unique steep white cliffs. 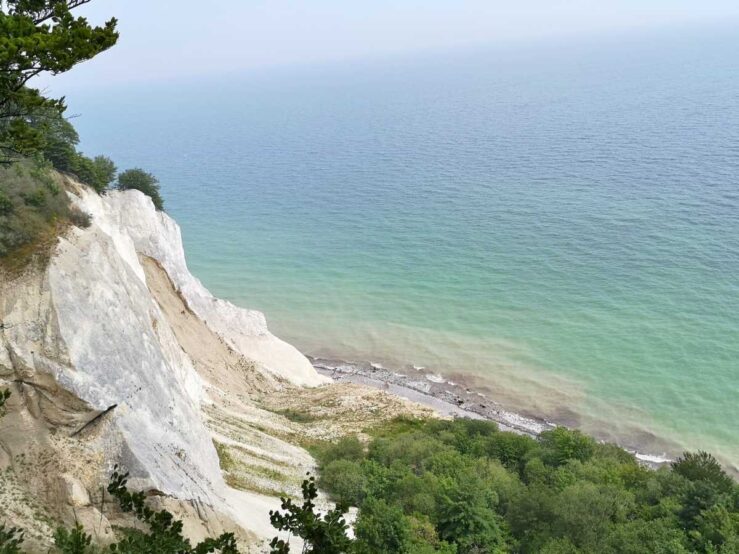 It is an eye-catching 6 km long chalky phenomenon whose foundation was laid millions of years ago by algae and aquatic animals in the tropical sea. With time these caused limestone plates to emerge on the seabed – which was the very beginning of the remarkable chalk cliffs. Later, about 11,000 years ago, the colossal Ice Age glaciers of the last Ice Age pushed the flakes of chalk, folded the resulting chalk layers and turned them into the pristine white cliffs as we know them today. 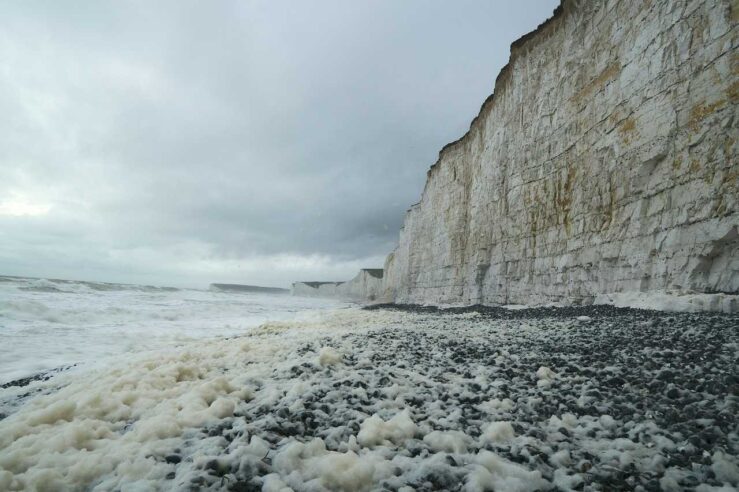 Møns Klint constantly undergoes transformation. Natural erosion ‘eats’ the cliffs every year. Rockslides can occur, and the last major incident was in 2007 where a huge part of a cliff, Store Taler, slid into the Baltic! It was actually the biggest chalkslide here for over 50 years.

The picturesque formation Sommerspiret vanished in 1988. This was really a great loss as it had been the towering landmark of Møns Klint and a favourite motif of the Danish Golden Age landscape painters such as Christoffer Wilhelm Eckersberg and Frederik Hansen Sødring. 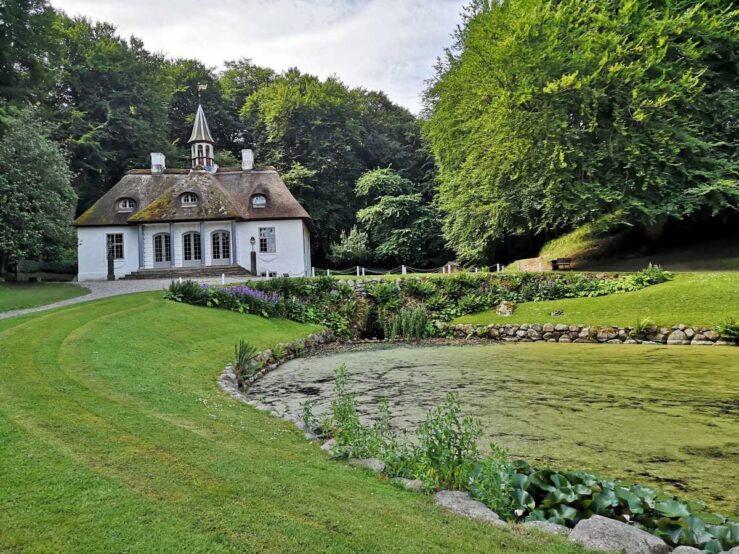 Slightly more than a hundred years ago, in 1905, one-third of the nearby Liselund Park also disappeared into the sea. However, the amazing Liselund baroque garden, situated all close to the cliffs at the northern end, is still absolutely worth a visit. The garden features picturesque ponds and rolling lawns – all designed by Antoine de la Calmette for his wife Elisabeth (Lise) towards the end of the 18th century.

The beauty of Møns Klint is particularly extraordinary on a sunny day where the outstanding white chalky cliffs falling into the emerald green or turquoise Baltic stand as a snow white silhouette against the blue sky.

Vertically spanning up to 128 metres, the cliffs majestically rise above the sea with Dronningestolen being the tallest one. 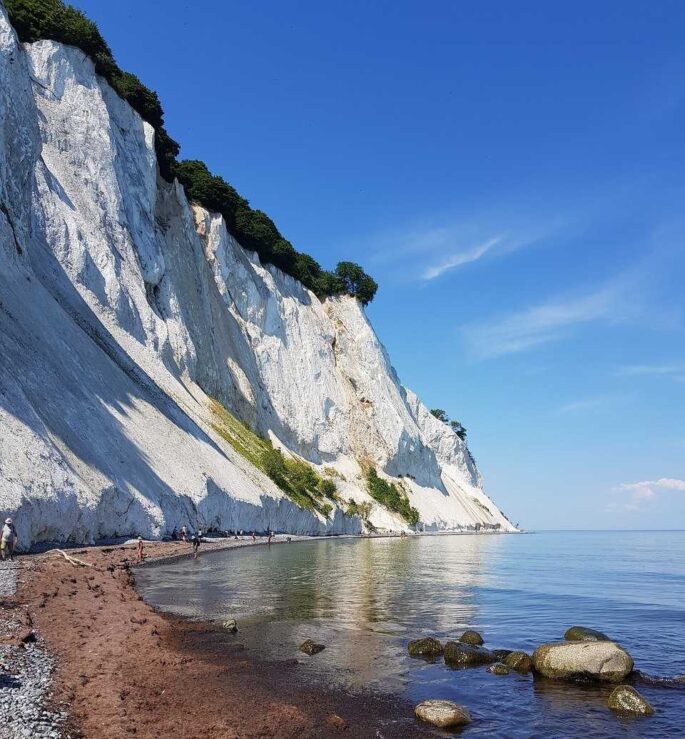 You can either hike the cliffs using the sublime wooden walkways and signposted circuits, use the mountain bike routes, try the zip lines, engage in snorkelling, or visit from the waterside – each thing enabling you to enjoy slightly different panoramic views of the strikingly dramatic white cliffs.

There are both ‘aerial’ walkways atop the spectacular cliffs and the option to hike along the beach at the foot of the steep cliffside. The upper and lower paths are interconnected through three stairways, adequately interrupted all the way down by scenic viewpoints providing incredible views and platforms naturally created along the cliffside. So even if hundreds of steps up or down, it is possible to divide the ascent or descent into some reasonable stages. 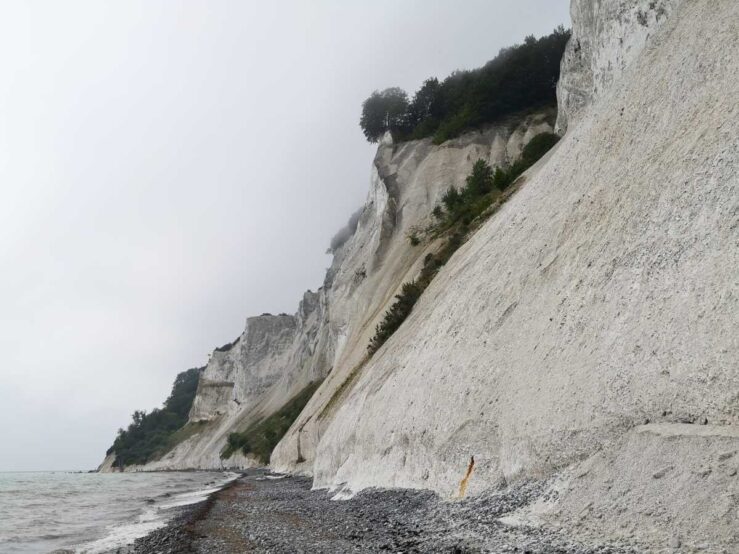 If you wish to explore Møns Klint from the seaside, you can take a boat tour (the Discovery 2-hour tour) from the nearby Klintholm Havn. It is a small seaside village founded in 1878 by Scavenius, intended for export of goods from the Klintholm Estate. Later, it was used for the eel and herring fishing industry, and still today buildings relating to this industry remain. One of these is the old eel house which has now been turned into a restaurant. In summer it is a lively place with fishing boats, leisure sailors, visitors, restaurants (even a beach food market), the bar Pier to Heaven, stretches of beach and more. 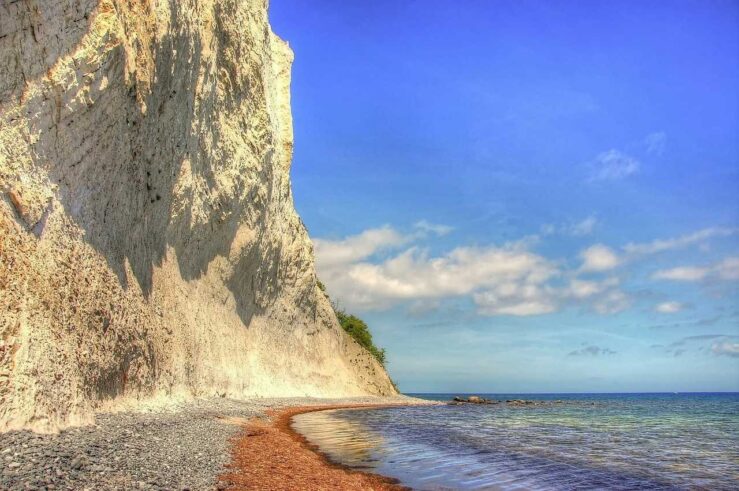 For fossil hunting the beach along Møns Klint is also just perfect! You can find fossils up to 70 million years old which were left inside the limestone material originating from the microscopic creatures living on the seabed at that time. Obviously the chalkslide in 2007 revealed great new opportunities for fossil hunters!

The forest above the cliffs, Klinteskoven, contains a large number of impressive beech trees, as well as a variety of rare orchid species and other plants – unique in Denmark. The reason that orchids can grow here is the chalky underground providing ideal conditions for the flowers. Also a rare large blue butterfly can be spotted here. 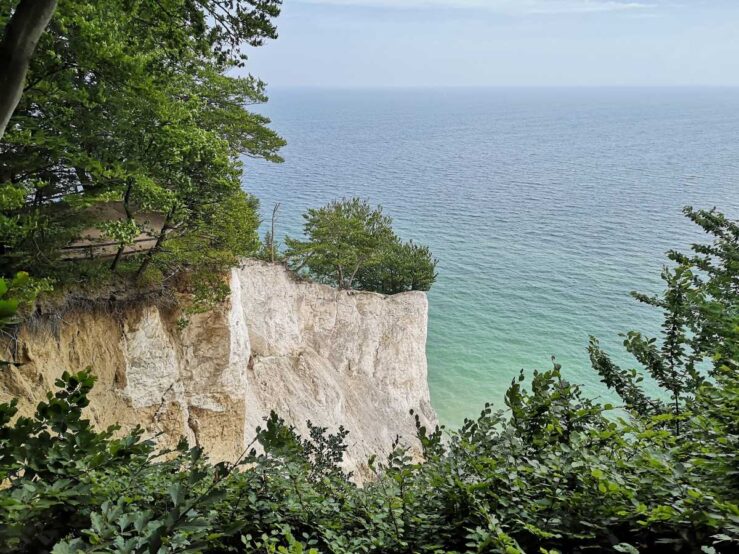 Moreover, more than a hundred burial mounds have been found here, most of them dating from the Bronze Age, but also in some cases as far back as to the Neolithic period.

In case you are interested in birdlife, you will have to look out for the amazing peregrine falcons that nest and inhabite Møns Klint – and with a bit of luck you will be able to spot one! It is the world’s fastest animal that can fly more than 300 km/hour. After not being seen in Denmark for 30 years, it is now again breeding at Møns Klint using the cliffs as an apt nesting site. 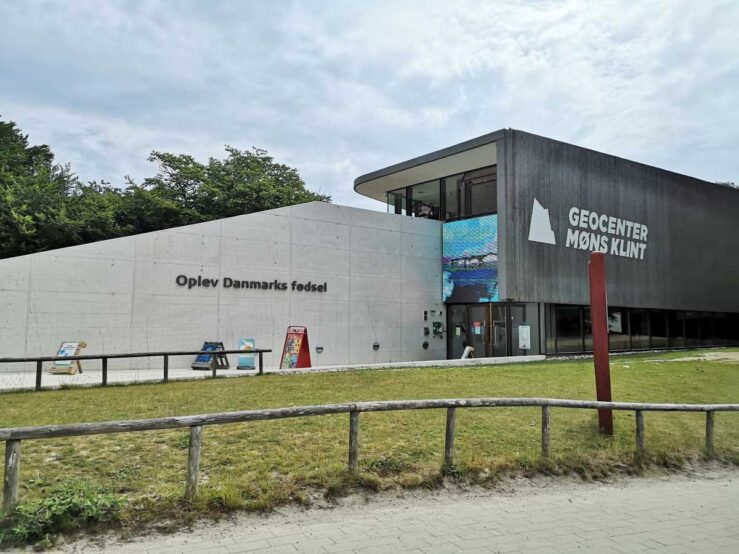 At the top of Møns Klint you should visit the Geocenter Møns Klint, the geological museum opening in 2007, where you can trace the geological prehistory, as well as discover the formation of the chalk cliffs and the surrounding landscape through interactive exhibitions, workshops, virtual reality experiences, 3D cinema and much more. 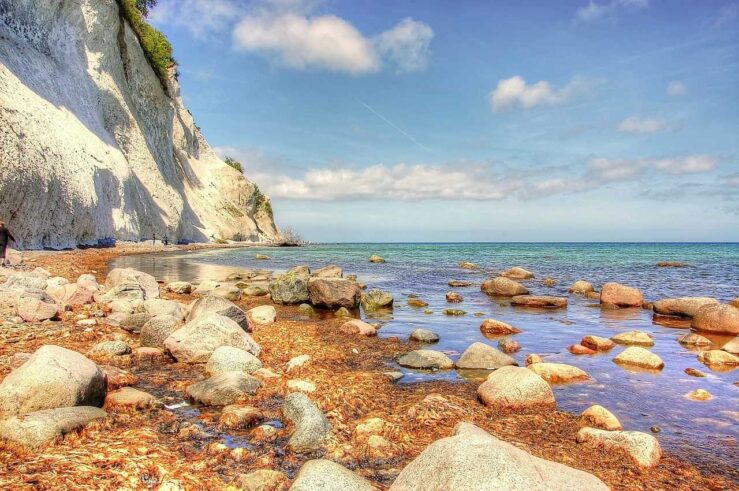 Other places of interest in Møn include Stege, the main town in Møn. It is one of the oldest market towns in Denmark which celebrated its 750th anniversary in 2018. Already in the Middle Ages Stege played a significant role in the Øresund herring fishery. The herrings from here were so plentiful that they contributed with one third of the Danish fish market in Falsterbo. 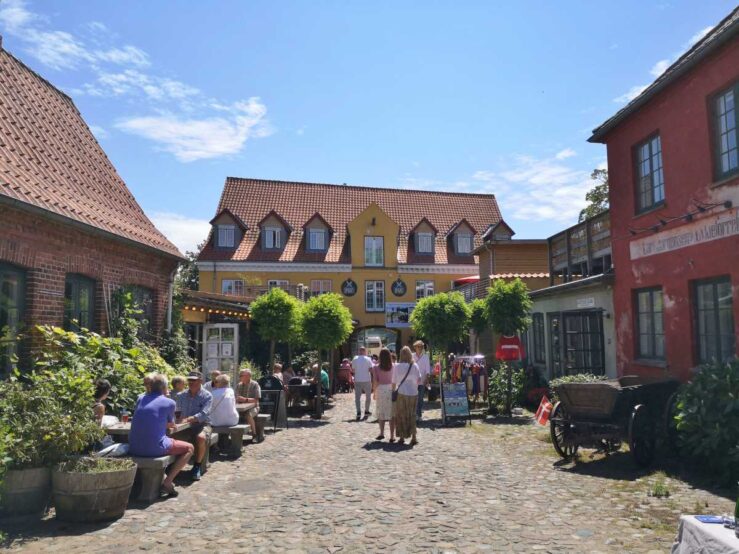 Today, the town still commemorates the old herring days by holding the annual ‘Herring Market’ – in addition to the always popular Tuesday markets throughout summer.

Strolling around Stege – maybe doing the historical walk the Herring Route, you will notice many remains from the Middle Ages, for instance the town ramparts, ‘Mølleporten’ which is a fine example of a medieval Danish town gate, a medieval castle from the 13th century, as well as a number of old warehouses. 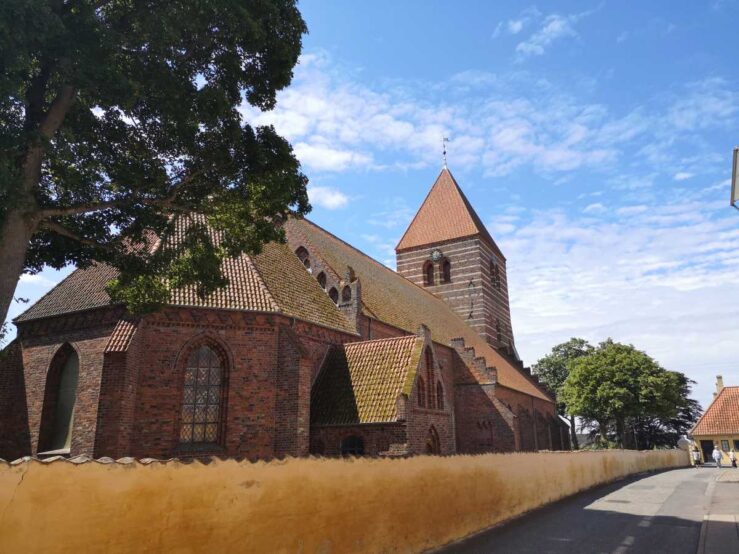 The spectacular Sct. Hans Church is the largest market town church in Denmark, likewise dating back to the 13th century. Inside you will discover the finest frescoes adorning the vaults. 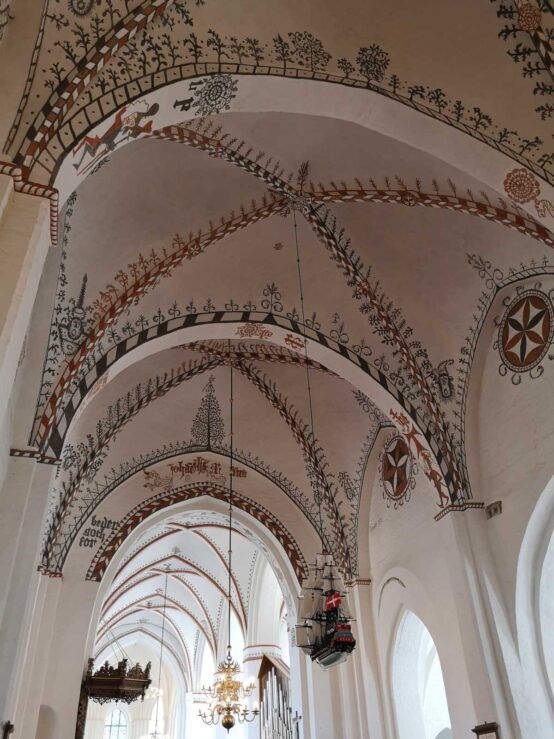 The island Nyord used to be property of the King, but in 1769 it was bought by 20 local farmers. Today, the island and the surrounding shallow sea is rich in birdlife and is a sheer paradise where migratory birds flock and rest on their migratory route. The meadows are home to a large number of ducks and waders that breed there. You can opt to explore the surroundings by kayak! Another sight on Nyord is the octagonal church!

To fully enjoy the striking landscapes of Møn you will do Camønoen, an increasingly popular 175 km long Danish ‘camino’ across Møn, Bogø and Nyord – of course inspired by the renowned pilgrimage route to Santiago de Compostela in Spain – but with its own Danish landscape character.

Other beautiful chalky locations in this part of Denmark count Stevns Klint (Cliffs of Stevns) and Faxe Kalkbrud (Faxe Limestone Quarry) – which are worthwhile places to include in your itinerary if you do a round trip by car from Copenhagen. 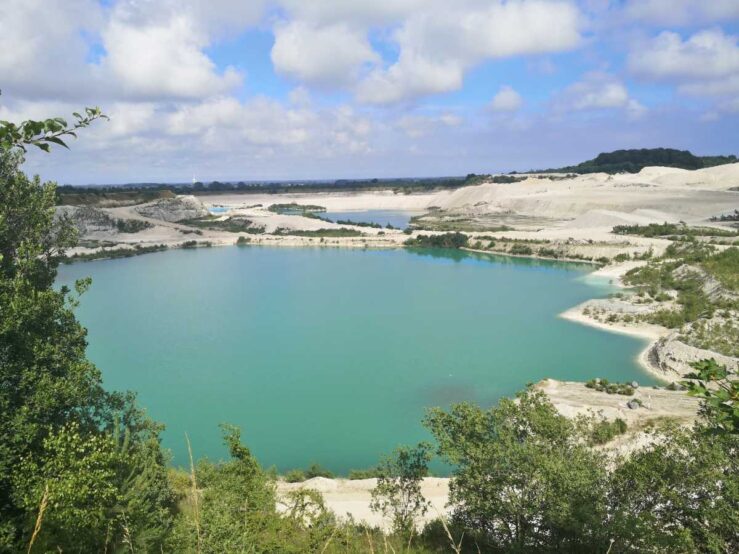 Faxe Kalkbrud has been the site of limestone production for over 900 years. The fossils left behind are the remains of the world’s oldest fossilised deep-water coral reef which was formed 63 million years ago and which was home to sharks, crocodiles and other fascinating animals. Visiting the quarry with the scenic azure lake you will be able to find fossilised corals, shark teeth, snails, crabs and more. To dive further into the geological phenomena and admire some of the numerous fossils excavated here, you may also visit the Geomuseum Faxe at the quarry.

Stevns Klint, the 20 km long cliff rising up to 41 metres above sea level, is another fabulous UNESCO World Heritage Site that boasts an abundance of fossils. At the same time it is the result of the asteroid hitting the globe 66 million years ago, eliminating the dinosaurs!

Read next: Visit Ærø and Blokart in Rømø