↓
JAPAN  Immense neon ads decorate the house fronts illuminating the dark sky in all the colours of the rainbow. We are in Akihabara, the electronic Tokyo where you will find all kinds of electronic devices, as well as a variety of items for people with a true anime and manga passion.
Ainnelise Niyvold Liundbye
This page has affiliate links (if you purchase through our links, we get a small commission at no extra cost to you - thank you!), see our Privacy Policy & Disclaimer.

Fascinating tall, scintillating ads are attached to the buildings, promoting all kinds of popular products. In this way the sparkling main street from Ueno to Akihabara becomes a hot spot for electronics acquisition, trendy gadgets and the Japanese eccentric, electronical consumption industry. The flashing boards undeniably leave us with the impression of a futuristic city. This is electronic Tokyo with its wealth of anime and manga related items in the store windows in addition to all the high-tech products! 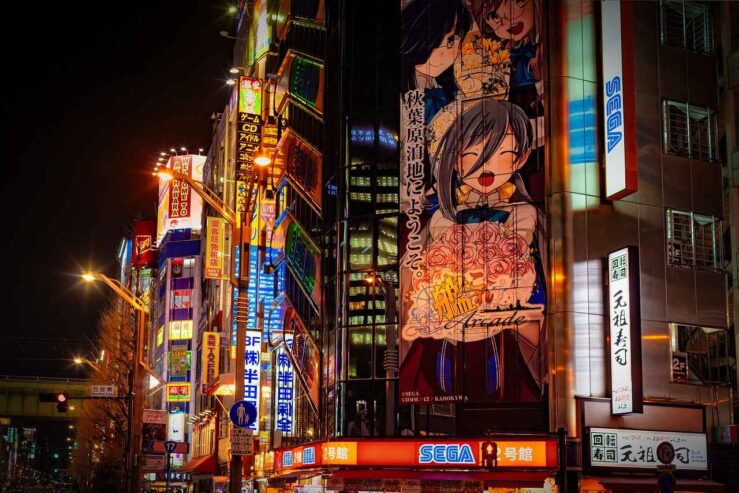 However, the contrasts in Tokyo between the old, traditional Japanese society and today’s way of living are stark. Nevertheless, modern life easily blends with traditional customs across the city.

Inspiration for Japan: Tokyo travel guide and Tokyo in 2 days

View on map
Manga and anime passion in electronic Tokyo

We needn’t move more than a few streets to the side, and we find ourselves in a completely different neighbourhood with an atmosphere of traditions and cultural heritage in contrast to high-tech Tokyo. Traditional culture and present-day life seem to integrate amazingly well. 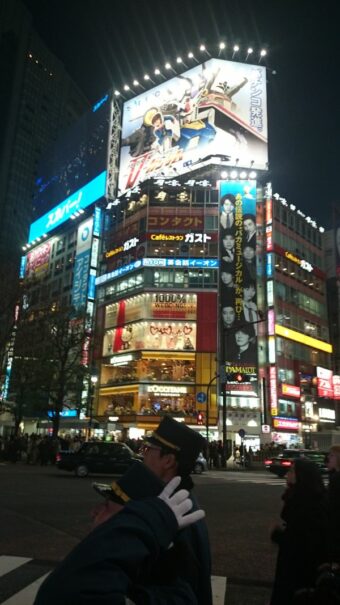 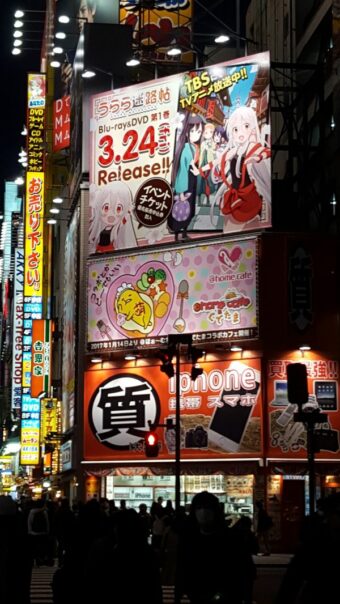 …and a passion for pink in Tokyo.

On the way from our local hotel down to the anime and manga district Akihabara, the electric town of Tokyo, we enter a fastfood restaurant. Either you place a take-away order at the entrance or eat at small tables or bar-stools at the serving counter. The waiter is very polite and ensures with a smiling expression on his face and a slight bow that everything is as expected.

I break the wooden chopsticks apart and indulge in the meal. After a few days in Tokyo I have actually ended up with quite a deft hand for mastering the art of the chopsticks whether it is for sashimi, tempura or udon. The food is excellent, and honestly, so far we have only eaten absolutely delicious meals whatever restaurant we have been to and however low the price has been.

Tokyo is undermined by an intricate network of underground and train lines belonging to a whole range of distinct companies. Strolling down the street towards Akihabara, we follow the parallel Yamanote Line with its numerous passenger trains passing. Immense neon manga ads appear on the house fronts with a vague dominance of shades of pink. It almost looks surreal.

The otaku industry prevails in Japan. Otaku is the Japanese term for people with a special interest in a subject. A fan of something. Today, there is a whole subculture around the otaku concept. Originally, it was related to anime and manga and their characters. With time it has been extended to comprise all obsessive interests within any kind of passion – manga and anime just being a particular one. One typical way to live out the otaku enthusiasm is to buy the small otaku items in the gachapon vending machines or in the otaku stores to be found on nearly any street corner or tiny shop. 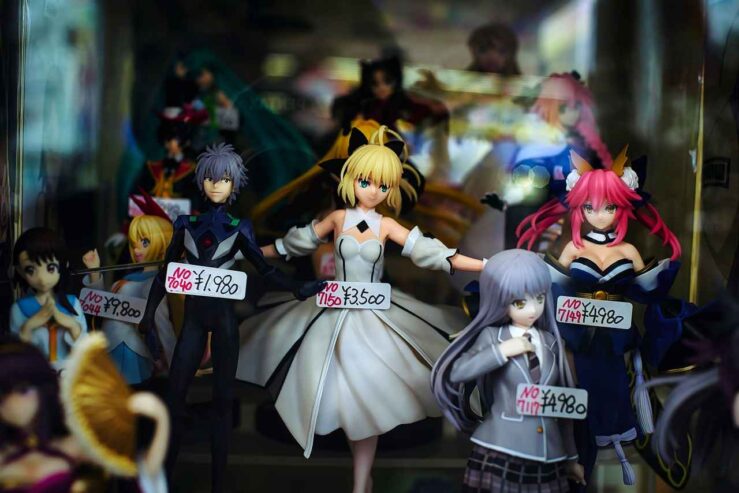 In particular Akihabara has turned into a centre for devoted otakus. We spot the gachapon vending machines everywhere! Seemingly, the otaku industry has gradually taken over. For many years Akihabara was the dominating location of unique electronic devices, not to be found anywhere else. Akihabara’s role in featuring a uniqueness of electronics has little by little been reduced over the last years – along with today’s opportunities to buy all kinds of stuff online.

Today Akihabara is therefore a lot more than ‘electronic Tokyo’. It is a centre of anime and manga, otaku items and a whole world of entertainment, gaming and spectacular fantasy universes. 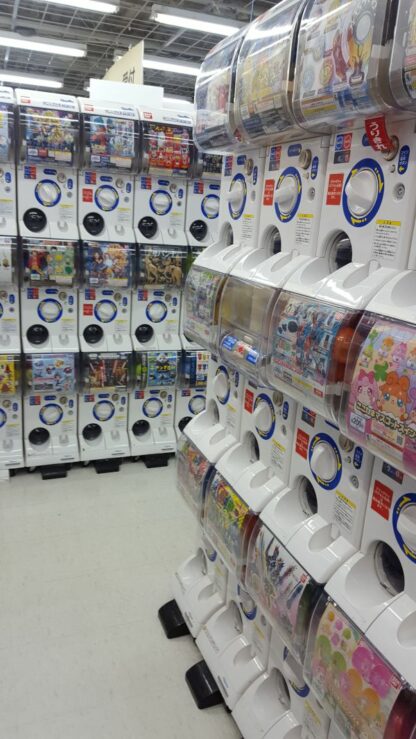 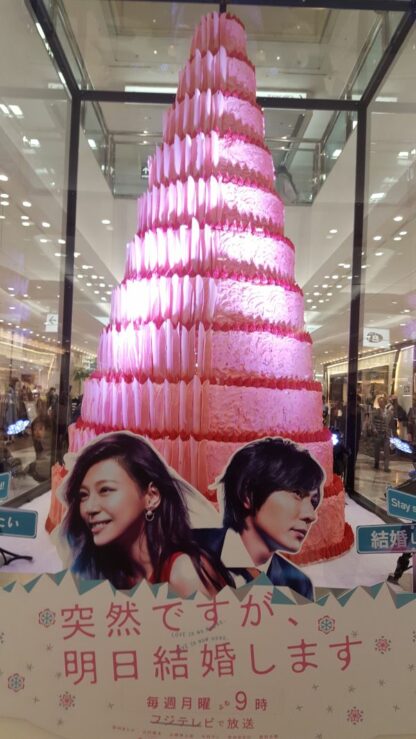 Continuing down the main street we now approach the immense stores for gadget, cosplay, anime and manga passionate people, namely the stores Mandarake and Animate. We enter into the fantasy universe where we immediately feel quite overwhelmed. It is impossible to try to capture all impressions. A whole new world of manga cartoons, anime characters and related merchandise appears. Most of the characters are completely unknown to us, but we do dispersedly spot Darth Vader, Naruto and a few other figures that we are a bit familiar with.

The passion for manga and anime goes beyond the visible street level. All of a sudden we find ourselves deep down in a basement. If we didn’t know better, we might take it for a public library due to infinitely long rows of bookshelves. It is like a maze and we nearly get lost between the books. Anyway, it turns out to be an amazing manga cartoon store – for anyone with an obsessive manga passion! 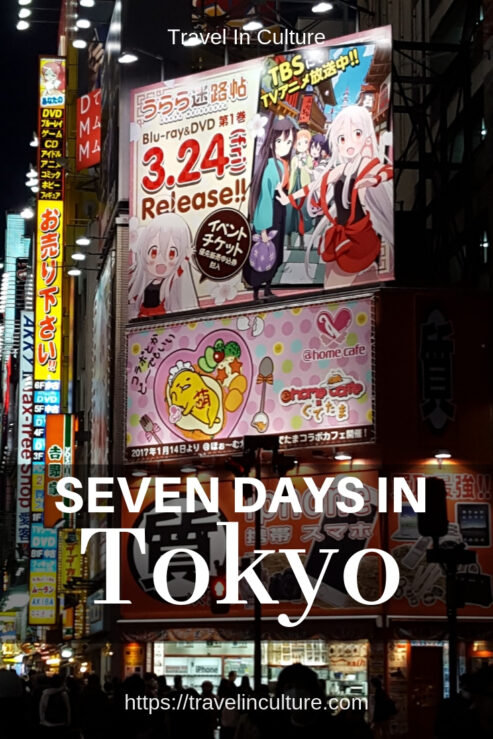 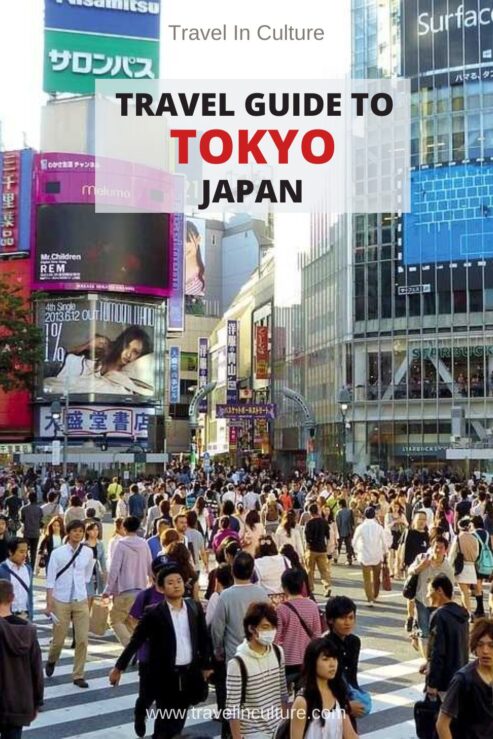 When taking out the seemingly dull books, we discover the most colourful mangas of popular fantasy universes. A competent shop assistant guides us to the Naruto shelf!

Our visit reveals the existence of hundreds or maybe rather thousands of anime and manga productions that most people in Europe have never even heard of. The store abounds with manga books to fulfil any manga passion. In fact it is the ideal place to find the perfectly unique souvenirs to take home!

Akihabara abounds with manga cartoons in all shades – it is a paradise for the anime and manga addicted!

To walk through all the floors of these mega stores, one after the other, is quite entertaining. More than once we are completely taken aback by what we see. All of a sudden we find ourselves on a floor filled with cosplaying costumes and top trendy selections of make-up and accessories. Honestly, I haven’t got a clue whether it is for men or women, but I am absolutely speechless.

Outside again we nearly bump into a girl dressed up as a Bavarian waitress. A few seconds later we spot pink Japanese ladies, seemingly resembling some well-known anime characters. No one seems to take any special notice of the girls since their appearance obviously is part of the usual picture here. They are promoting one of the nearby maid cafés. 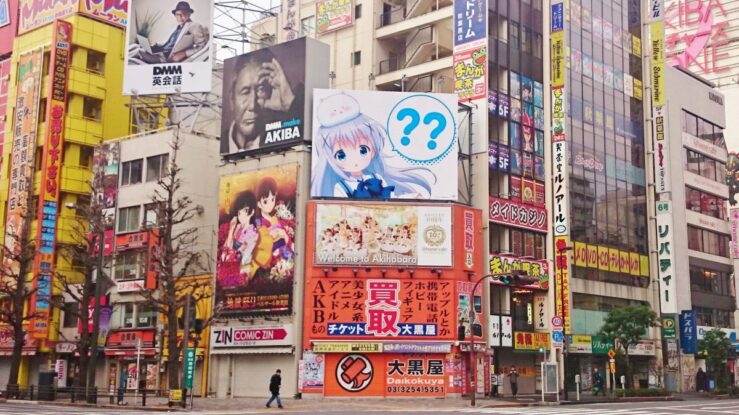 When passing a bustling gaming hall, a Pachinko arcade, our attention is inevitably drawn to the activities inside. This is another popular side of electronic Tokyo. Curiously, we enter into the hall to see for ourselves what it is like. Insanely loud music meets us as soon as I open the door.

Seemingly, the young men are very addicted to the games on their machines. In the very moment we are inside, a Japanese employee approaches us to charge us for entering. We have no idea what the deal actually comprises. Moments later we are therefore out again! The short moment in noisy surroundings is already about to trigger a splitting headache.

Anyway, I have to admit that the world of entertainment, games, otaku objects and electronics in Akihabara combined with a fascinating Tokyo anime and manga universe has triggered my curiosity far more than I had expected!

The father of manga passion and anime culture

In essence, anime is the animated version of the Japanese manga books. The manga passion and anime culture in Japan notably began to accelerate after World War II.

One of the driving forces behind the developing anime culture was Osamu Tezuka. He is known in Japan as precisely the father of manga and anime. As young he was tremendously inspired by Walt Disney. Being a promising cartoonist he created some of the biggest successes in the genre in Japan. It was in particular his Astro Boy (Tetsuwan Atoma) which was his convincing masterpiece and breakthrough to fame. His outstanding style and original approach enabled him to get international success as well.

Since Tezuka’s boom, manga and anime culture has literally exploded in Japan. Today it is so integrated – whether you want it or not – in the Japanese society that there are references to anime characters in countless public places.

Do you need a 3-day itinerary in Tokyo? Then take a look at this itinerary:

Read next: Hotel with an Onsen in Tokyo and 11 Must-See Temples in Kyoto